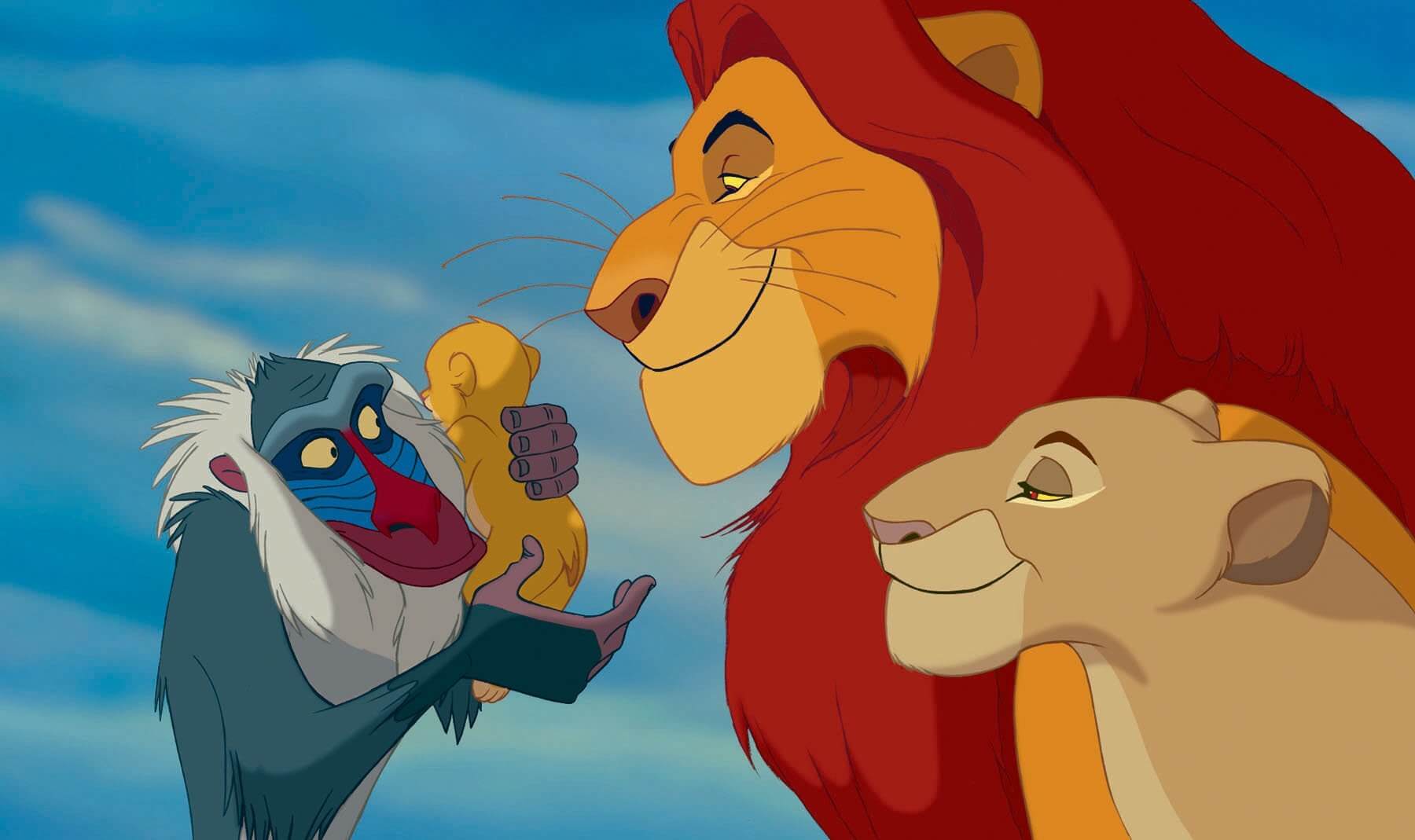 Munir: Hello and welcome to another edition of A Decade Of, where we are currently reviewing the Disney Renaissance. Today, we are taking a look at what’s arguably the apex of this decade, The Lion King. Originally called King of the Jungle and conceived as “Bambi in Africa,” The Lion King was seen as a B project at the studio. Most of the top animators and the budget were allocated to the studio’s next film, Pocahontas, which Katzenberg and Disney’s top brass thought was going to be the next Beauty and the Beast.  Released in the summer of 1994, The Lion King was an instant success, becoming the highest-grossing animated film of all time and winning two Academy Awards for best original song and score. The film is also one of the studio’s most enduring classics and remains relevant 25 years after its initial release. The Lion King has also spawned two direct-to-video sequels, an animated TV series, a very successful Broadway musical, and a new CGI remake. Is all this success deserved? Let’s take a look. What do you think of the film, Virginia?

Virginia: Wonderful introduction, Munir. I always laugh when I think about the fact that many people believed Pocahontas was a surefire hit and that animators were put on Lion King as punishment. I like the original Lion King very much. It’s not my favorite Disney movie (as you know), but it is very high on the list. In many ways, this year’s unnecessary remake proves just how technically excellent the original is.

M: I agree with you. The Lion King is also very high on my list, and it’s one of the first Disney films I was exposed to, so I have fond memories of it. 25 years later, I still think it’s a potent story and entertainment of the highest order. I haven’t seen the remake, and I don’t plan to, but reading some reviews, it seems I haven’t missed much. Of all the remakes Disney is making, this one always seemed the most pointless, as it’s animated (despite what Disney says) and a shot-for-shot remake of the original. It’s a waste of time and money, in my opinion, but I guess the majority of the world doesn’t agree with me, as it has become the highest-grossing animated film of all time, unfortunately. Since you saw the remake, what is your appreciation of it?

V: I wasn’t thrilled with the remake. Honestly, I wasn’t even expecting to enjoy it at all in the first place. Nonetheless, they somehow managed to put out a worse product than even I was anticipating. So, good job subverting expectations there, Disney.  The animation is technically impressive but artistically bankrupt, the performances are mostly dull and lifeless, and the musical arrangements are inferior to those in the original. I would say that your decision to skip it is valid. You’ve saved yourself two hours that feel like ten. 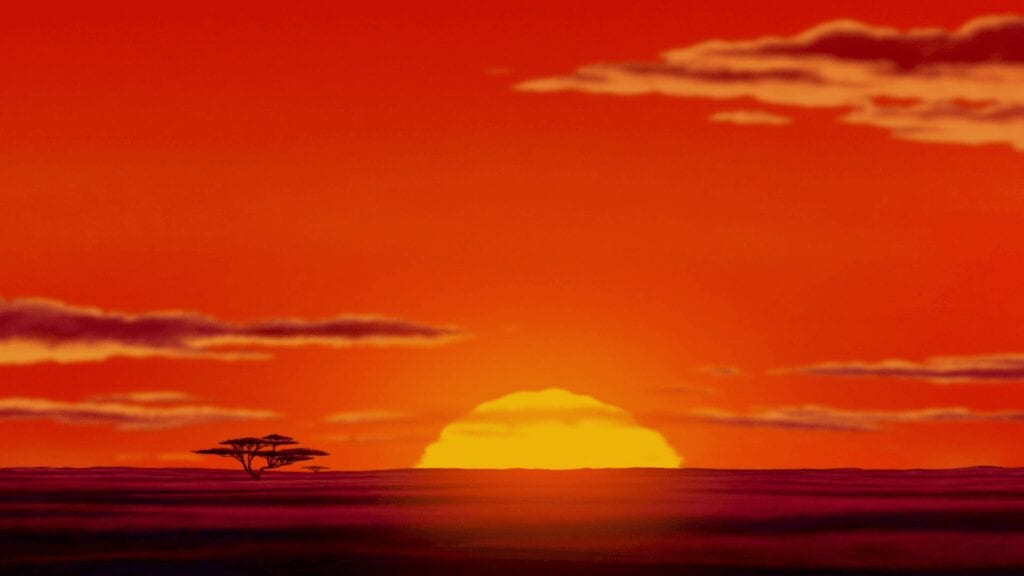 M: Thank you for that great recommendation, haha. OK, let’s talk about the original film, starting with the beginning. I think that The Lion King has the most impressive opening of a Disney film, and one of the best ever in cinema. Right from the start, you have a feeling that you’re about to watch something epic. The superb animation mixed with the great “Circle of Life” song just gives you goosebumps, and its impact hasn’t diminished since it was originally released.

V: It is a meticulously staged bit of animation, and the music, of course, accompanies the scene perfectly. The visual of Rafiki lifting up baby Simba has become as famous as anything else in American cinema, and for good reason. It’s not my favorite scene in the film, but it’s the perfect way to begin it.

M: It’s also worth noting that this is the first musical from this decade that had music that was not done by Alan Menken or his collaborators. The task fell to Hans Zimmer, Elton John, Tim Rice, and Lebo M, and they are up for it. While I don’t think all the songs are masterpieces, the score is one of the best in the canon, and it’s the only one that has given Zimmer an Oscar. This makes me wonder why Disney Animation hasn’t worked with him again after this film. What do you think of the music? 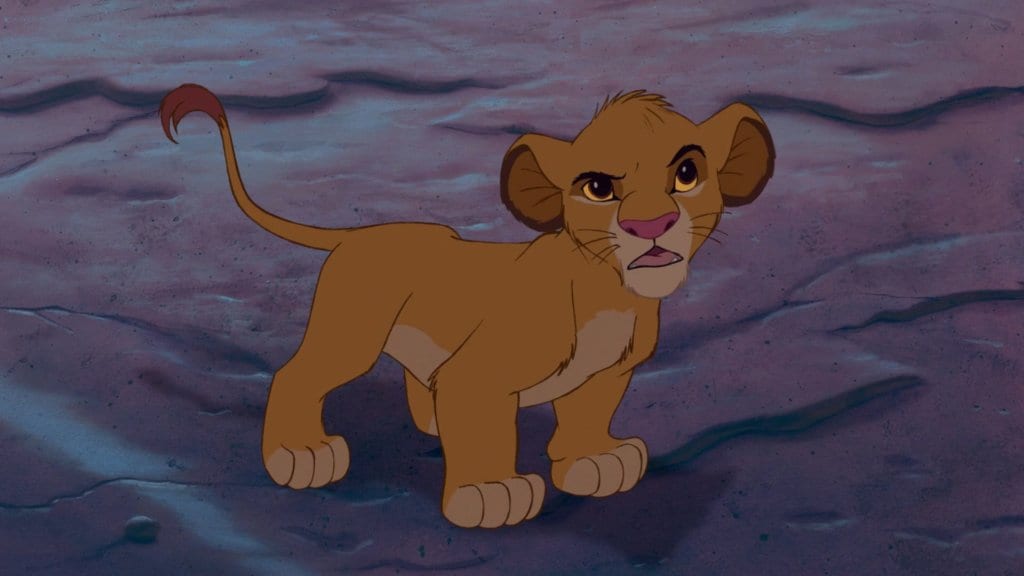 V: The Lion King‘s musical score is one of my all-time favorites. There’s not a track present that I don’t absolutely love, but my favorites are “Kings of the Past,” “This Land,” “The Rightful King,” and “Under the Stars.” However, the songs are much more mixed in quality. I love “Hakuna Matata,” “Be Prepared,” “Circle of Life,” and “Can You Feel the Love Tonight.” However, I don’t care for “I Just Can’t Wait to Be King.” I think it’s annoying, which I can tell was intentional, but regardless, I don’t like it. The deleted (and later restored) “Morning Report” is a dud, and personally, I watch the version of the film that excludes it.

M: “Kings of the Past” and “The Rightful King” are outstanding. The stampede is also amazing. I agree with you that the songs are more varied in quality, and I have to confess that I’m not crazy about “Hakuna Matata.” It’s not a bad song, but I don’t love it as much as the rest. “Be Prepared,” “Circle of Life,” and “Can You Feel The Love Tonight” are classics. “Morning Report” doesn’t exist for me. It’s less essential than “Human Again” in Beauty and the Beast, and the version of the film including it is the incorrect form to watch. Let’s talk about the characters. Many people have said that Simba is a bland character, but I think his depiction of guilt is very well done. It’s evident that, even though he appears carefree once he meets Timon and Pumbaa, he carries this tremendous guilt of what happened to his father, even if in reality, he is blameless.

V: Honestly, I used to think Simba was a dull lead. However, his character arc is wonderful, and it’s enjoyable to see him play off of the other characters. Simba’s journey with guilt and defeatism are infinitely preferable to the usual “be yourself” narrative we tend to see in these films. I think that, really, Matthew Broderick is bland at times in the movie, and that’s what really bothers people (including me). I will say that I also think the guilt Simba suffers is similar to what real people go through when they blame themselves for trauma. 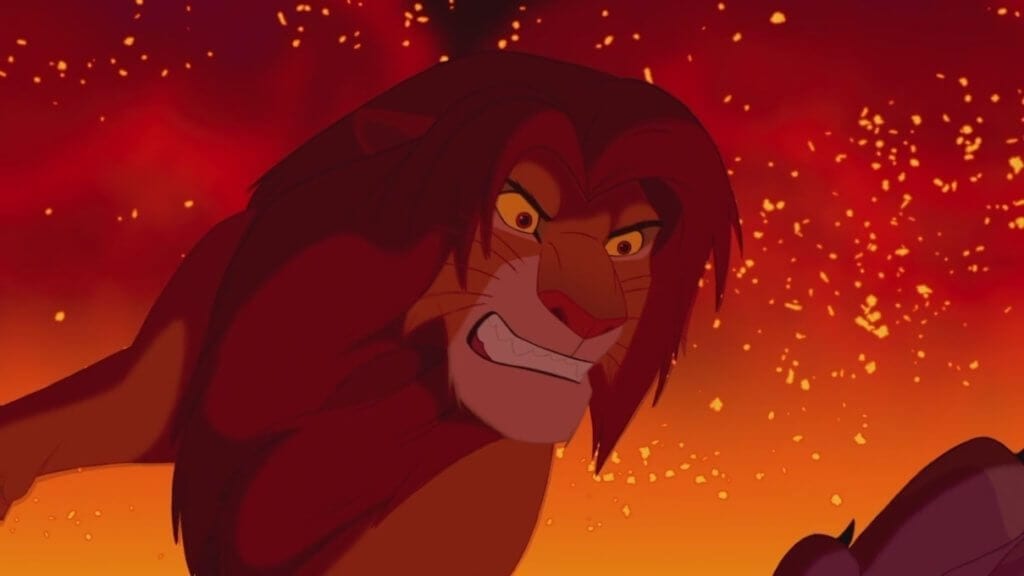 M: Agreed. I also like Nala. From the start, the film positions her as the strongest one when she pounces Simba. And afterward, when they reunite as adults, she is the voice of reason. She is the one that calls him on his bullshit about living in the present, and the first one that tells him he needs to fulfill his destiny. I know much has been said about Beyoncé as the new Nala and how she was more “active” in the remake. What’s your appreciation of that?

V: I like Nala, and I agree with what you said about her being the voice of reason prior to Simba’s confrontation with Rafiki and the spirit of Mufasa. However, I think she’s somewhat bland, and one of Disney’s lesser female leads from this era. I didn’t care for Beyoncé’s performance in the remake, and additional scenes with Nala add to the runtime, but not the story.

M: Fair enough. Now, let’s talk about the villain. Scar is one of the best and most compelling villains in the Disney canon. Much has been said about the perfect marriage between animator and actor that created the Genie in Aladdin. Personally, I think the combination of Andreas Deja with Jeremy Irons is also iconic. Scar is charismatic, cunning, and evil. His song, “Be Prepared,” is a classic, and I think he’s the only villain that kills someone from his own family. He’s one of the film’s strongest assets. What do you think of him and how he compares to the version in the remake? 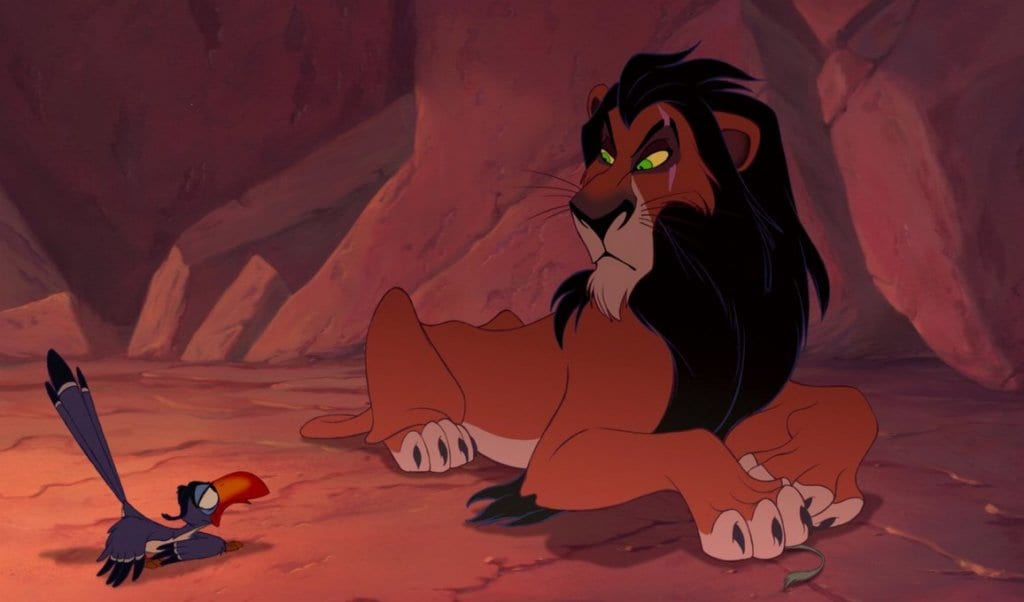 V: I completely agree. Deja was a master at animating villains, and Irons’ performance is amazingly inspired. I really wish they’d gotten him back for the remake. I like Chiwetel Ejiofor, but he’s sorely miscast in this role. This somber delivery of Irons’ sardonic, quirky lines doesn’t fit at all. I can admire what Ejiofor was going for with his performance, but the film’s writers should have changed the character’s writing accordingly. They gave this poor man nothing to work with, throwing him to the hyenas, pun intended.

M: Good one. Speaking of the hyenas, I also like them as Scar’s henchmen. They walk a fine line between funny and menacing, and I think Whoopi Goldberg, Cheech Marin, and Jim Cummings are great in the roles.

V: I agree entirely, and I’ll spare you the suspense; this is yet another of the remake’s failings. Florence Kasumba is OK as Shenzi, and they kind of try to make her more of a leader. The other two get, like, one funny line, and their names are changed.

M: Pity. As you know, the sidekicks are often a tricky thing for Disney; they can either be great or awful. But I think The Lion King has good ones in Zazu, Timon, and Pumbaa. I consider Rafiki more of a mentor than a sidekick, but he’s also a great character.

V: I agree again. Rafiki is actually one of my favorite characters in the film, and provides one of the film’s best scenes/quotes. He’s totally stripped down in the remake, and may as well not be there. Timon and Pumbaa never cease to crack me up. Nathan Lane and Ernie Sabella are perfectly cast. 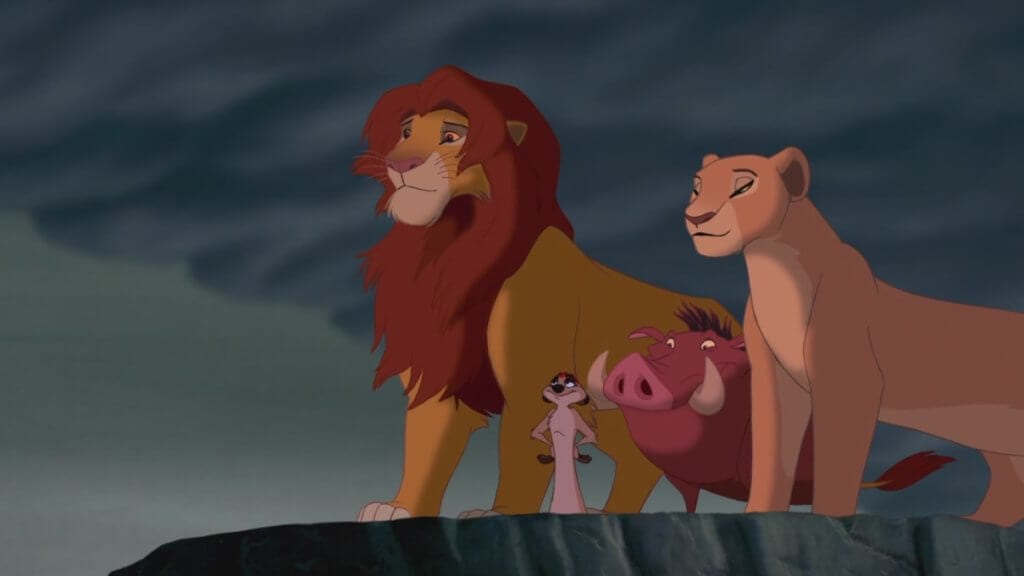 M: Let’s talk about some scenes. We already discussed the Circle of Life sequence, but there are many standout scenes in the film. One that most people remember is, of course, Mufasa’s death. Just like the death of Bambi’s mom traumatized lots of children, this scene has done the same since it was released. I think it’s a very impactful and heartfelt scene, and even if you don’t cry with it anymore, it is a pivotal moment in the movie. What do you think?

V: The whole stampede scene is amazing. The music, animation, and vocal performances make this one of the most intense Disney scenes. I also love the scenes where Simba collapses in the desert after running away, when he is confronted by Rafiki (great quote and message here), and when he runs back to the Pridelands. I hate to belabor a point, but the stampede scene’s sense of urgency is totally lost in the remake. They also remove Rafiki’s line about running from the past, despite its status as an integral aspect of the plot and Simba’s character arc. When he does run back home to help, they play a pop song by Beyoncé. 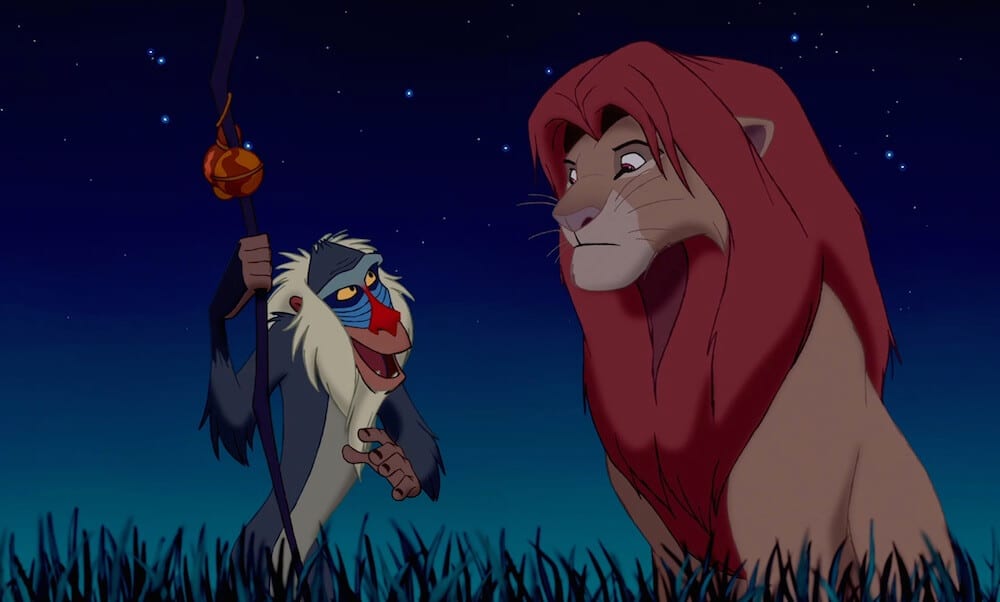 M: Those are some of my favorite scenes too. I also like when Rafiki discovers that Simba is alive, the confrontation with Scar, and Simba’s ascension to Pride Rock. That one always gives me the chills. I think The Lion King has earned its stature as a classic, and it’s one of the best and most powerful films in the Disney canon.

V: Yes, I also love it when Rafiki finds out about Simba. Such an exciting moment. The music at the other two parts you mention is incredible. This film features such a wide array of soaring emotions, it’s easy to see why it’s such a phenomenon.

The Lion King isn't a perfect film, but it is very close. A timeless story about personal responsibility and facing your past, endearing characters and gorgeous animation have made this one for the ages. We recommend the original classic over this year's flashy but empty remake.