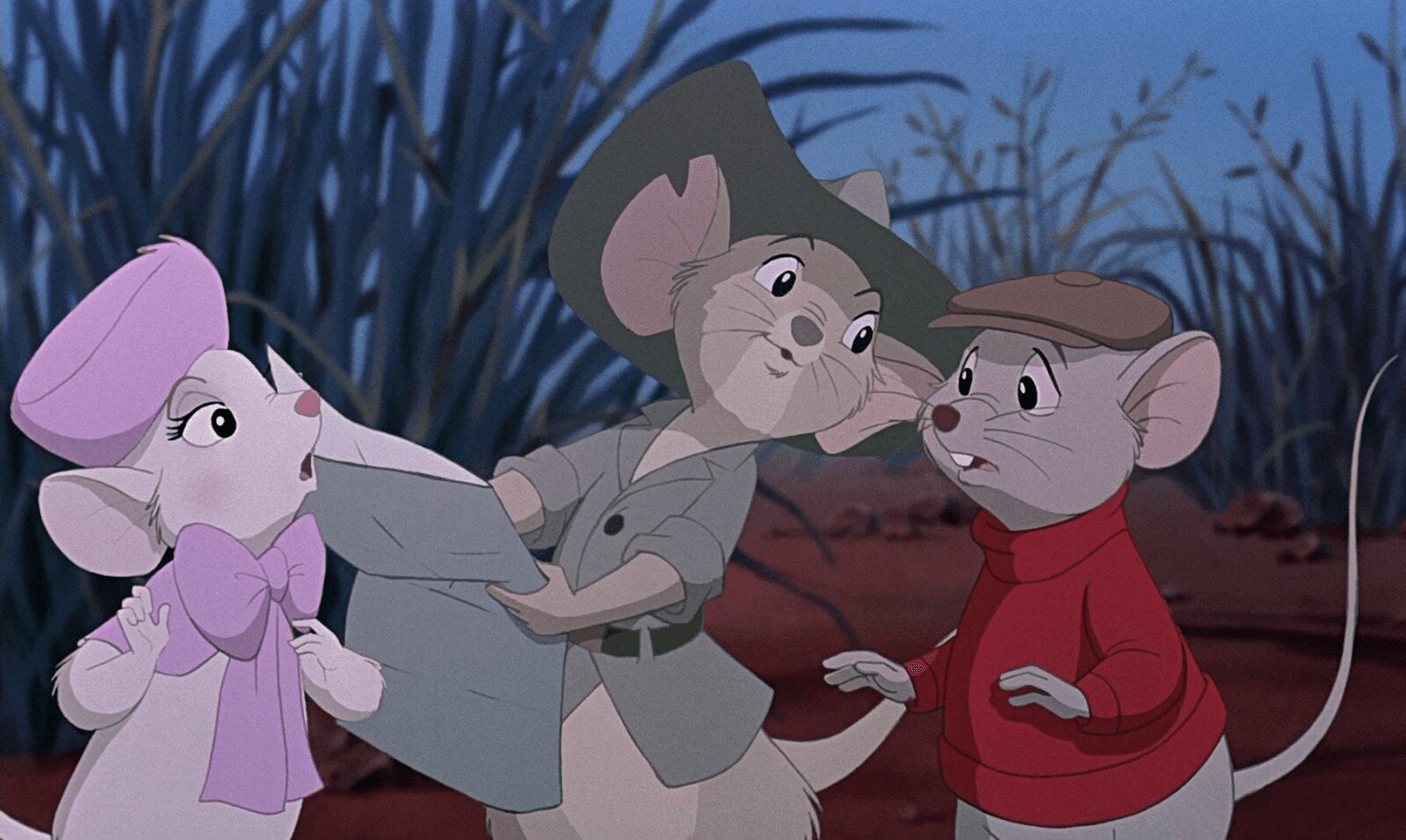 Munir: Hello and welcome to another review of A Decade Of, where we are currently talking about the Disney Renaissance. Today, it’s time for the oft-overlooked The Rescuers Down Under. Released in fall 1990, a year after The Little Mermaid had brought great success for the studio, The Rescuers Down Under was a completely different film from its predecessor and remains the outlier of this period. The main thing that differentiates this movie from the rest of the same decade is that it’s not a musical. Another interesting aspect is that it is the first sequel that the studio had ever done. The first Rescuers, released in 1977, was the last film where most of the legendary Nine Old Men worked together, and it was their biggest success since The Jungle Book. Still, it’s curious as to why that film was selected to have a sequel. While definitely popular in its time, nowadays it’s in the middle ground in terms of popularity. It’s not as recognizable as the studio’s biggest hits (like The Lion King or Frozen) but not as forgotten as some of the most obscure movies they have produced (like the package films or The Black Cauldron). The most notable thing you can say about The Rescuers Down Under is that it was the first film to be produced entirely by CAPS (Computer Animation Production System). This is the revolutionary program that allowed the animators to digitally paint each frame. Unfortunately, that wasn’t enough to make the film successful. After only two weeks of release, then studio chief Jeffrey Katzenberg pulled the plug of all the advertising for the movie. Then, it went into obscurity where it has remained ever since. Personally, I like The Rescuers Down Under, but I do think it’s the weakest of the decade, with some befuddling story choices and too little time for character development. Still, it has beautiful animation and a great score courtesy of Bruce Broughton. What do you think of this film, Virginia?

Virginia: I really like The Rescuers Down Under. I was never a big fan of The Rescuers, but the sequel is faster-paced and actually gives Bernard a character arc. It is a rather light-hearted story, but I don’t mind that, and I love the action-adventure feel of this film. I also adore George C. Scott, and he’s quite funny as the villain, McLeach, a scummy animal poacher.

M: I actually feel that it’s not up to par with the original, which I like more. I like that the mice actually help Penny, and Medusa is a riot. I think that my main gripe with the film is that Cody is a self-sufficient boy that doesn’t really need the help of the two mice. He frees himself (with the help of other animals), and he meets the mice once he is out. I also don’t like Jake very much. The filmmakers give him a subplot where, at the start, it seems that he’s going to be Bernard’s competition to win Bianca’s affection. However, that doesn’t go anywhere in the end. I also think Cody, while being a vivacious child who cares about nature, does not have an arc of his own. In the first one, Penny’s goal is to get adopted. During the course of the film, she also gets to be more confident to defy Medusa. But here, Cody is already a fully-realized character at the beginning and never undergoes any change. 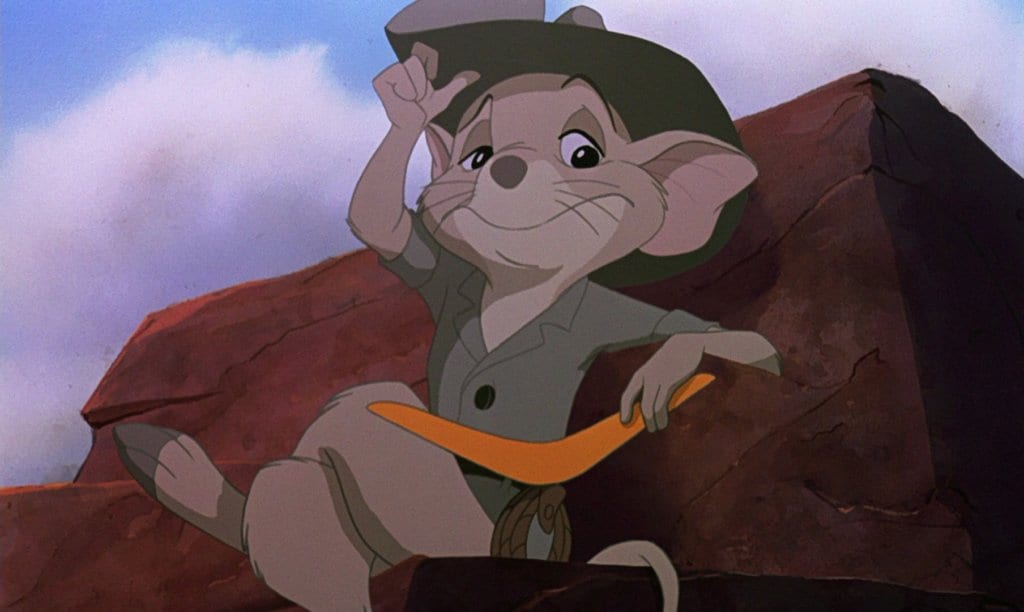 V: I actually agree about Jake, and when I rewatched the film for our review, he really annoyed me. Cody does indeed free himself, but then he unwittingly falls for McLeach’s trick, leading him to Marahute’s nest and eggs. This is when he really starts to need the help of Bernard, Bianca, and Jake. I will concede that Cody doesn’t really have a character arc, as he is already an animal lover who consistently tries to do right. However, I don’t think Penny really has what I would consider a character arc either. She wants to get adopted and get away from Madame Medusa and Mr. Snoops, but that’s an external struggle rather than an internal one. I see what you mean about her confronting Madame Medusa at the end, but I don’t see a clear progression. Personally, though, the biggest difference is that I find The Rescuers boring both visually and narratively, whereas The Rescuers Down Under is a blast from start to finish. I will say I don’t consider either film to be great in terms of character and story.

M: I agree that, visually, The Rescuers Down Under is much more interesting than the first film. There are many impressive sequences, beginning with Marahute and Cody’s flight. However, I actually get bored in many scenes in this film, especially during the escape scene with Frank. He really annoys me a lot and drags the whole thing down for me. I’m also not sure who the main character is in this movie. While the title implies that it’s Bernard and Bianca, I feel like they enter the film too late. And even then, it divides its time between them and Cody until finally uniting them all, but not enough time has been devoted to any of the characters. In the first one, after a brief prologue where we see Penny sending the bottle through the ocean, we stay with Bernard and Bianca for the whole film. I think McLeach is the most interesting character because he has one clear goal, and Scott’s voice gives him a greater presence than any of the other characters. 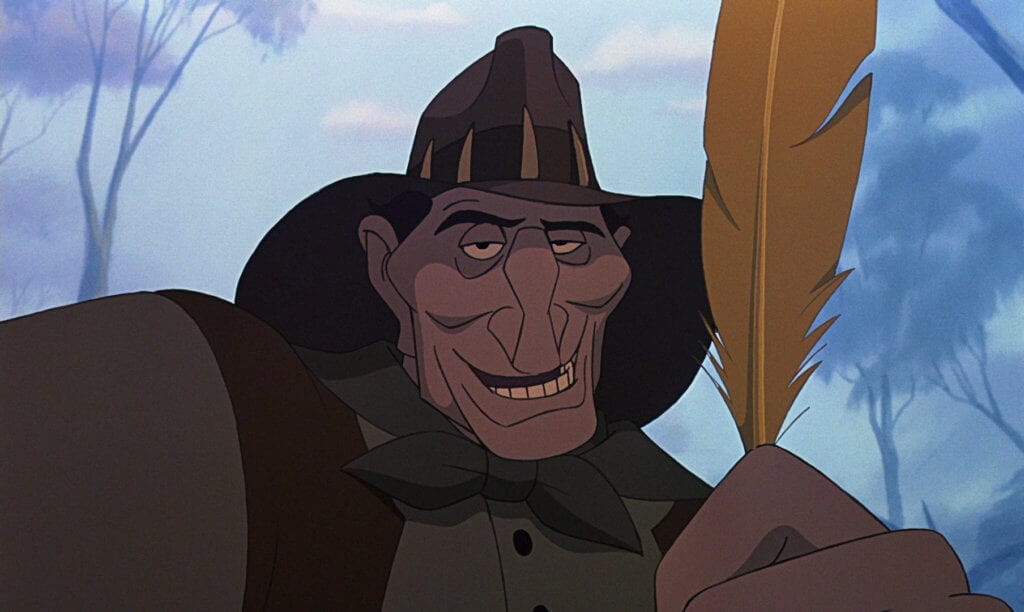 V: I can certainly see why Frank would annoy you. I’m fine with him, but that’s completely fair. As for McLeach, I would agree that he’s the film’s best character, with the caveat that Bernard is actually really good in this movie too. And, as I mentioned, while I don’t like Jake, I do like Bernard’s journey in this film. In terms of the lead, that’s actually a good point. I think the main character would be Cody, but arguments could undoubtedly be made.

M: Yeah, Bernard’s arc is certainly the most interesting in this film. Another problem for me is that the ending seems rushed. I don’t know if that was a budgetary or creative choice but, while it’s certainly a happy ending, I always feel bad for Cody’s mom. It’s like she thinks her son is dead and he is just flying happily. I would have liked to see him reuniting with her, and also maybe see Bernard and Bianca’s wedding. I understand that this is a very subjective thing, but the ending always leaves me cold, especially regarding Cody’s mom. How do you feel about it? 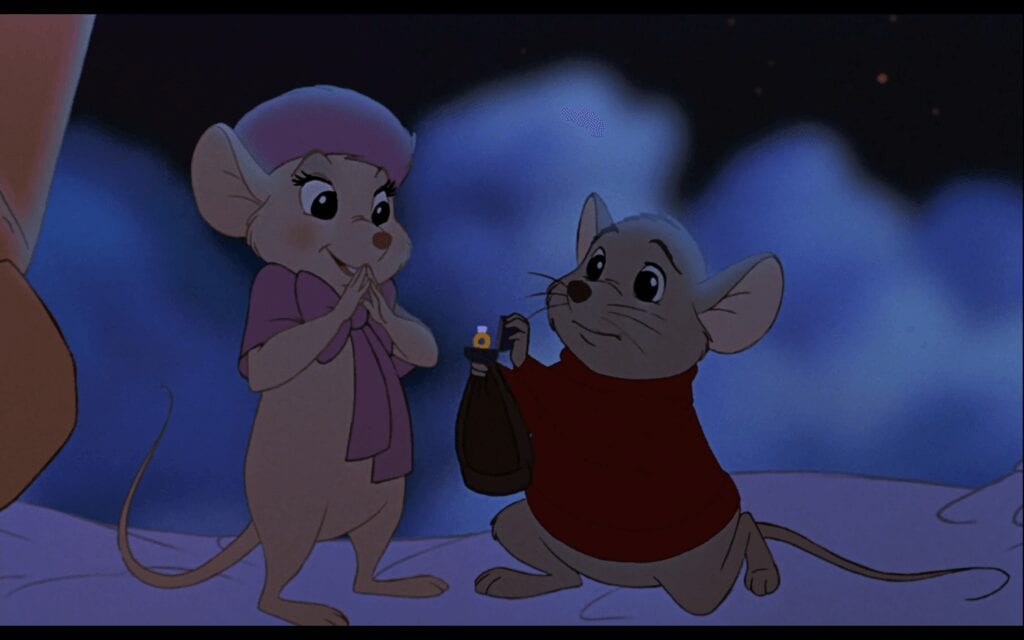 V: I totally agree with you about the ending. The scene where the Rangers tell Cody’s mom he’s dead is very effective. It’s a shame it wasn’t paid off with a sweet reunion. And, truthfully, I hadn’t thought of it, but I agree too that showing the wedding would have been a nice touch. Give all the characters some sense of closure.

M: Exactly. Now, I do have some positive things to say about The Rescuers Down Under. As stated before, this was the first film to use CAPS, and the result is outstanding. The animation is excellent, and the colors are very vivid. The Australian outback is beautifully rendered. Also, the action scenes are really well-staged, especially the one at the river during the climax. They really build tension very well. And, as I said before, the flight scenes are a highlight. However, I think my favorite scene in the film is at the beginning in the restaurant, where Bernard is trying to propose to Bianca. I just love how they show more of this little world where mice live, and it’s a shame that we didn’t spend more time exploring that. What’s your favorite scene?

V: My favorite scene visually has to be Marahute taking Cody for a flight. That being said, I also enjoy Bernard’s conversations with Wilbur (voiced by John Candy). I also really like the animation on McLeach’s lizard Joanna. She always manages to crack me up.

M: Agreed. She’s a funny sidekick. I also like Bruce Broughton’s score. I think it accompanies the action scenes very well, giving oomph to every moment. And I also appreciate the fact that it’s not a musical, and it’s a different thing from what came before and after. 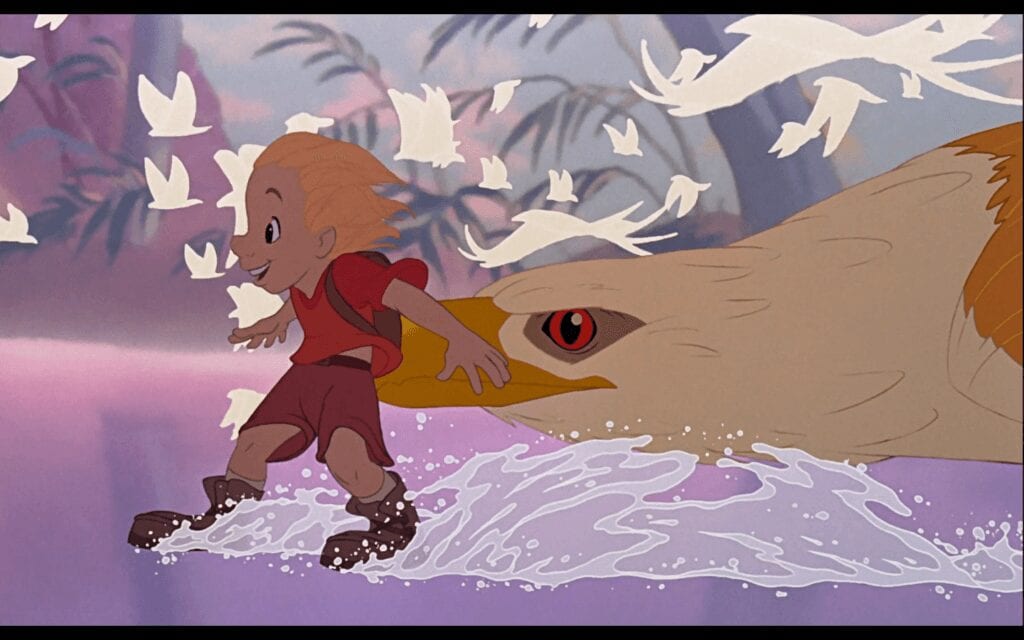 V: Totally agreed, the film’s musical score is energetic and lovely. One more thing I want to make sure to mention is that Cody was at one point going to be an Aboriginal Australian boy, instead of a Caucasian one. I’m not one to complain about the race of a character and things like that, but that would have been cool, in my opinion. It also would have made it more necessary for the setting to be in Australia.

M: That would’ve certainly been far more interesting than what we ultimately got. However, I don’t think Disney really started getting sensitive about race until they were producing Pocahontas. To sum up, I think The Rescuers Down Under is an enjoyable film with some nice animation and action scenes. However, it’s nothing great or spectacular, and it’s perfectly understandable to see why it got overshadowed by its predecessor and successors.

V: I, on the other hand, believe it to be quite underrated. It’s not my favorite Disney film or even my favorite from the Renaissance period, but I certainly think it’s worth watching. I love the visuals, music, and (most of) the characters.

M: What do you think of The Rescuers Down Under? Let us know in the comments and don’t forget to come back for our review of one of Disney’s crown jewels (and our favorite Disney film), Beauty and the Beast!

The Rescuers Down Under

The Rescuers Down Under should be remembered as a landmark in animation and film-making as it brought the advent of Disney's CAPS. It also features lovely music by Bruce Broughton and delightful voice talent. However, the story can be a tad basic and the film doesn't explore any interesting themes.