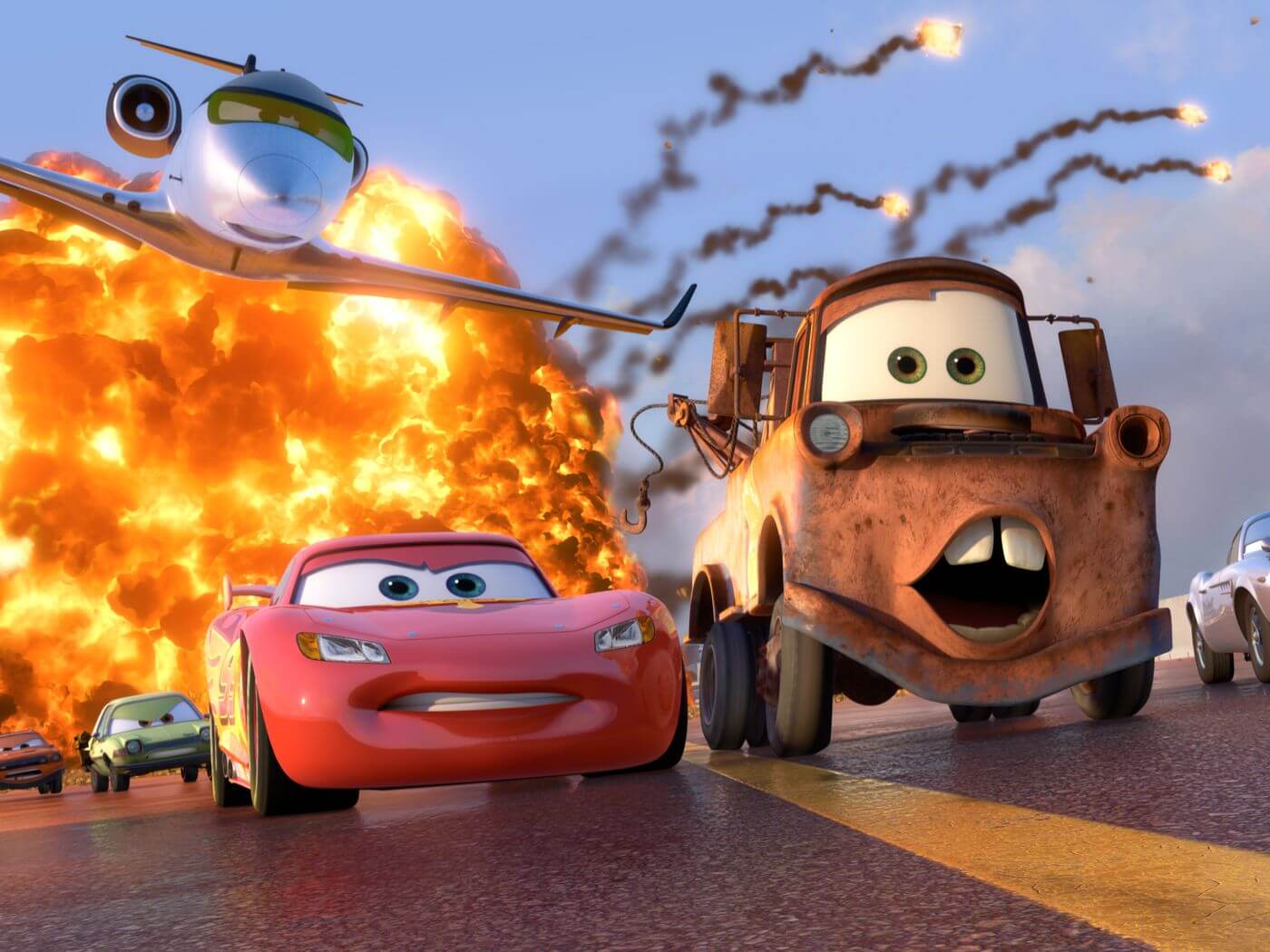 Virginia: Welcome back to A Decade Of, where we look back at ten years worth of a film studio’s movies. Today, as part of our series on Pixar, we’ll be taking a look at Cars 2. Far from the critical darling Toy Story 3 was, Cars 2 is actually quite reviled by fans and critics alike. It managed to earn lower Rotten Tomatoes scores than Cars, which was previously the lowest-rated Pixar movie. Do you have any ideas regarding what went wrong with this film, Munir?

Munir: I think many factors contributed to the misfire this film was. First of all, it was a sequel to a movie that, up to that point, was regarded as the weakest entry in Pixar’s oeuvre. While people were clamoring for sequels to Toy Story and The Incredibles, no one was asking for more Cars. Still, the first film managed decent reviews and good box office, but what really made it a huge hit was all the merchandising that it sold. That may have been why Disney asked Pixar for a sequel. Another point was that the original director, Brad Lewis, was replaced by John Lasseter, who, at that point, was overseeing both Pixar and Walt Disney Animation Studios. This made him a very busy guy and not someone who could dedicate the amount of time required to deliver a good product. And, last but not least, I think the biggest mistake was to make Mater, one of the least appealing sidekicks in the Pixar canon, the protagonist of the story. All this made for a film which wasn’t sure of what it wanted to be. Was it a spy thriller? An international race movie? It tried to be both, but it certainly didn’t go well. Although I must say that, while critics and most people didn’t like it, it still managed to be successful at the box office.

V: And it did indeed sell boat-loads of die-cast toy cars. I think you make some salient points, particularly about Mater. I also think the film has a tonal problem. I’ve got no problem with a film that contains both light-hearted moments and tense or devastating scenes; in fact, those tend to be among the best movies out there, in my opinion. But Cars 2 opens with a car being tortured and ultimately murdered by the villains. There is nothing in the film that really justifies this scene; it is a mindless comedy for the most part, focusing on Mater’s antics in trying to be a spy and his friendship with Lightning McQueen. Why show such a bleak, harrowing scene at the beginning of your film if the rest of the movie intends to be a harmless, albeit ridiculous, comedic romp?

M: Completely agreed. The tonal problem is very jarring, and Mater does not make a compelling protagonist. I must say that I do like the first Cars, and Lightning’s arc of starting out a selfish asshole, and then becoming a thoughtful friend, is very compelling. In this film, however, Lightning is completely sidelined in favor of a character that does not experience any kind of transformation. Mater is the same from start to finish, making him a completely flat character who brings the movie down with him. Cars 2 does have some great sequences; I especially like the beginning with Finn McMissile. But overall, it’s a mediocre product. I feel that both Michael Caine (McMissile) and Emily Mortimer (Holly Shiftwell) were excellent additions that were completely wasted in favor of infantile antics. I would’ve watched a spy film featuring their characters and wholly separated from the Radiator Springs gang rather than the mishmash we ultimately got. Also, Shiftwell becoming Mater’s girlfriend at the end was utterly forced and unrealistic. I don’t think anyone could buy that she would fall for him.

V: And they do nothing to show why we should find it believable. The two share no chemistry and have no touching moments or conversations. I like Holly and Finn a lot as characters, and I agree that a spy plot with just them and no Mater could have been better. At least it might have been more fun. You’re exactly right about why Lightning ultimately works as a lead character, and Mater doesn’t; one is a dynamic character, and one is static. Lightning McQueen starts out with defined character flaws and misplaced beliefs that the first Cars film must set right. Meanwhile, Cars 2 features characters literally telling Mater that there’s nothing wrong with him and never to change, even when his actions and the events of the film indicate otherwise. For example, Mater’s behavior during the Japanese leg of the Grand Prix in particular causes chaos and everyone acts like it wasn’t his fault. The film tries to tell the audience that Mater is perfect the way he is and that the world should change for him, a notion that is entirely antithetical to the first film’s themes. Cars was hardly a masterpiece, but at least it understood theme and character development. In this regard, it’s worth about 10 of its successor.

M: Agreed. This film reminds me a little of Atlantis: The Lost Empire in that it has some great individual sequences and the animation is outstanding, but it makes me mad in that it could’ve been much better. If there are two saving graces in this film, they are the animation, which hardly comes as a surprise since Pixar always excels on that front; and Michael Giacchino’s score, which elevates even the most cringe-worthy scenes. Another problem it has is that it tries to include everyone from the first film and they’re just standing there without much to do. One thing that we talked about in our Toy Story 3 review was that the movie excelled in deftly managing a large cast of characters. However, it’s also worth noting that it wasn’t afraid of losing some characters from the previous two films (RC, Etch, Wheezy and, most importantly, Bo Peep) if it served the story. Here, everyone is present, but they are not doing anything useful to advance the plot. 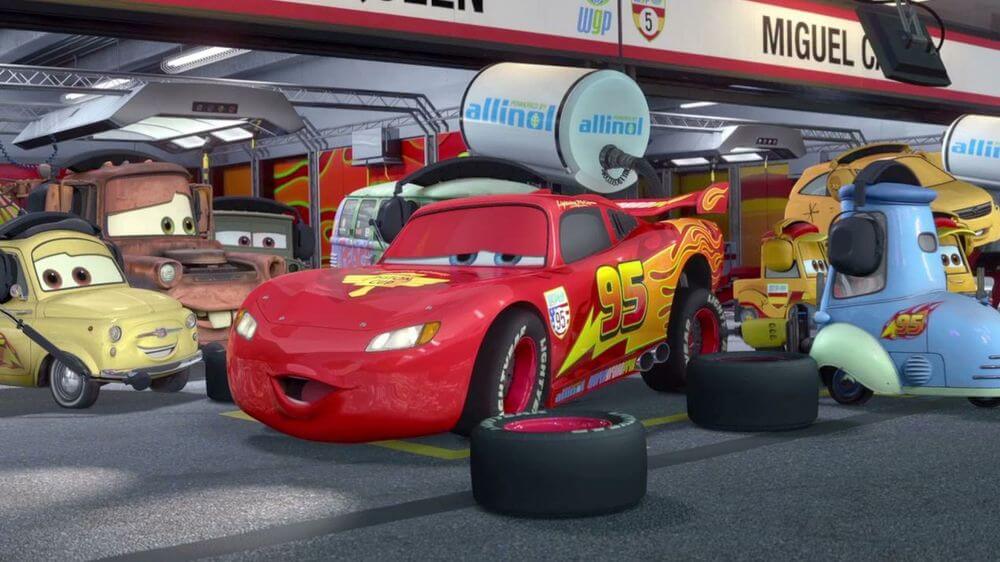 V: I honestly even like Atlantis a lot more than Cars 2. I agree that the animation is stellar as always in Cars 2, and Giacchino is a genius. I’ve loved him ever since The Incredibles. That’s an interesting point about the characters. We talked about how Toy Story 3 has a huge cast but everyone serves a purpose; in Cars 2, as you just mentioned, many characters simply don’t. It feels like this film has no passion in its storytelling. Honestly, I wonder if Pixar’s parent company Disney simply demanded a sequel to a film that was self-contained and left no real room for a sequel. If they had made a spy adventure about the spy cars as earlier mentioned, maybe this could have been an anthology-style series. That way, they could get their profits and toy cars, and the output may have been better.

M: I also like Atlantis more than Cars 2, but both had the potential to be much better films. I think that watching Cars 2, was the first time that I felt Pixar was no longer the little (for lack of a better word) studio that created inventive and original films, but one that also had to answer to a higher power. I’m pretty certain that Disney demanded a sequel to capitalize on all the merchandise the franchise was selling. It was a completely different time from 1999, when they turned Toy Story 2 from a direct-to-video sequel into a masterpiece and where they had the leverage to demand a better deal from Disney. By 2011, they were part of the big company, and they had to submit to its rules.

V: Always a shame when creativity is overridden by capitalism. As an aside, isn’t it kind of silly near the end when Sally and other friends from Radiator Springs come all the way to London (?) to save Mater and Lightning? It feels like the scene in The Incredibles where Helen heads to Nomanisan Island to save Bob, but here it makes no sense. Sally and crew cannot help in a situation like this, and forgive me if I’m forgetting something, but how did they even know the two were in danger?

M: Plot hole 101. They just needed to wrap up the story, and at this point, I don’t think they cared if it made sense or not; they just wanted to finish. Changing the subject a little bit, I do believe that, despite Cars 2’s less than stellar reviews, all the reactions surrounding the film were greatly exaggerated. I distinctly remember that people were saying that it was “the end of Pixar” or that “Pixar is dead.” I think that was completely ridiculous. After 15 years of garnering praise and box office gold, one film was going to destroy it? Also, I think some critics were particularly vicious with their reviews. True, Cars 2 is a deeply flawed film, but I think they have been waiting for Pixar to “screw up” so they could criticize it with abandon. Let’s be real. Most of the other American animation studios have done films equal to or even worse than Cars 2, and many critics have given them a pass. I know that we expect more from Pixar than from other studios, but I found that the level of criticism for this film was a little bit extreme.

V: Oh, certainly. Disney did several movies in the 70’s and again in the 2000’s that were just as bad, if not worse. Also, although I don’t like Cars 2 much, I don’t hate it. There are certainly worse films out there. And I don’t think one movie can break an otherwise successful studio.

M: I find most of Illumination’s output equal to or worse than Cars 2. To wrap up, I think the film has a lot of issues and wasted potential, but as you said, I don’t hate it. I see it as a mindless romp with great visuals. Still, it marked the beginning of a bumpy decade for the famed studio.

V: That’s a fair assessment. I’ve said before that I don’t agree with the term “guilty pleasure,” but I guess if I had them, Cars 2 would be one. I don’t think it’s a good or even average movie, but I do watch it occasionally.

M: That’s all for today. What do you think of Cars 2? Let us know in the comments and tune in for our review of Pixar’s first original film from this decade, Brave.

While we may not hate Cars 2 as much as some other fans, it is Pixar's weakest effort to date. The characters aren't developed, the dialogue is ridiculous and the plot is impossible to get invested in. The film sports impressive animation and music, but that just isn't enough to get this lemon going.