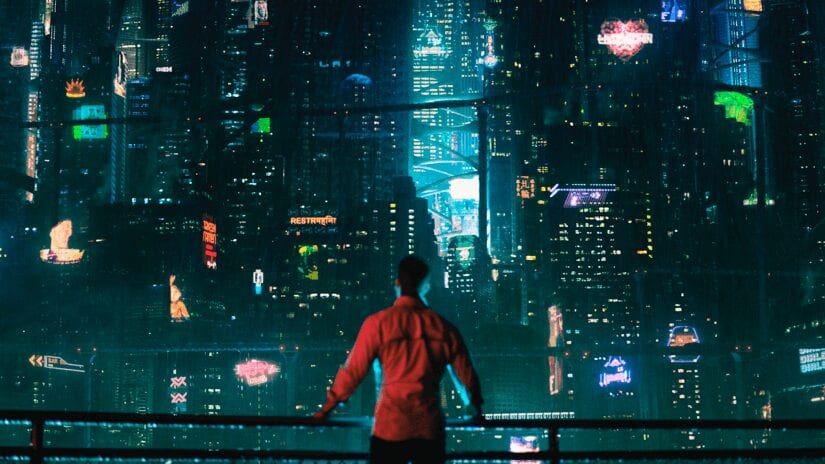 Altered Carbon follows Takeshi Kovacs, a man who was put “on ice” nearly two hundred and fifty years prior, as he is brought in to investigate the murder of Laurens Bancroft to win his freedom. However, the more Kovacs digs, the the more disturbing the secrets become.

Going into Altered Carbon, I didn’t really know what to expect. The trailers were visually stunning, with an incredible looking world (heavily inspired by Blade Runner) and a great cast. But I was worried more so about how they were going to execute what appeared to be such a complicated world. Thankfully, I’m pleased to report that Altered Carbon is a fantastic sci-fi ride. 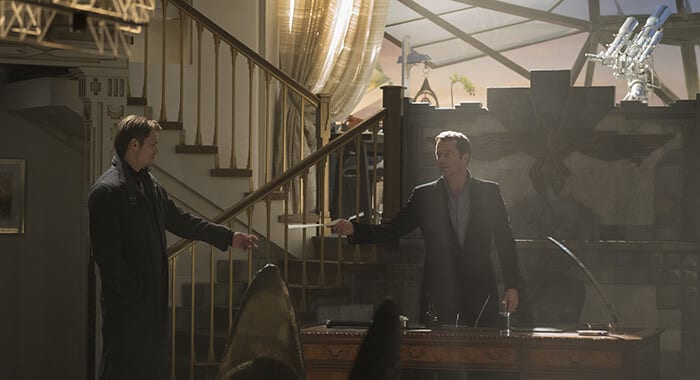 Joel Kinnaman does fantastic work as the lead character, Kovacs. Initially, Kovacs isn’t a very noble person; he’s not the hero that perhaps I thought he was going to be. Kinnaman does a great job bringing the complexity of this character out though his eyes and facial expression, as well as when he delivers some sardonic and/or sarcastic dialogue. Kovacs is a very tortured character for many reasons, and in my opinion this might be Kinnaman’s best work yet. And James Purefoy is delightful as Bancroft. Purefoy is an actor I’ve admired for a while now because of how he utilizes his voice and face to accentuate any dialogue he has. The simplest lines are riveting when spoken by him, and this time around is no different. Bancroft isn’t as straightforward a character as he looks from the trailers, or even the earlier episodes, and later on in the series Purefoy gets some pretty meaty scenes to play.

Martha Higareda, a completely new actress to me, REALLY impressed me as Kristen Ortega. Higareda brings out the badass side of Ortega, but also shines in quieter scenes when she’s just discussing the politics and religions of the world she inhabits. She choked me up in her more emotional scenes too. Ato Essandoh is great in the role of Vernon Elliot. In his earliest scenes he really plays up how down and out his character is. He also captures the desperation of a father very well, and there are a couple of scenes with him later on that are incredibly emotionally resonant.

Chris Conner might be my favorite of the supporting actors, though. He plays Poe, a slightly crazed AI who runs the Raven Hotel. He delivers all of his dialogue in such a fun and entertaining manner. He serves as comic relief at times, and boy does it work; Conner got some of the best laughs out of me in the whole series. The last two performances I want to talk about are Will Yun Lee and Dichen Lachman, who play Kovacs (original body) and his sister Rei respectively. Will Yun Lee (who played Wei Shen in Sleeping Dogs, by the way) is spectacular in the handful of scenes he gets to work in, and Dichen Lachman might be even better. Agents of S.H.I.E.L.D fans will remember Lachman as Jaiying from season 3, where she did a pretty good job, but nowhere close to this level. She is absolutely stellar, and where she takes her character is surprising as well as heartwrenching. Fantastic work from both actors.

Altered Carbon’s plot isn’t as straightforward as the short synopsis I presented, but going deeper into the story would be majorly spoiler filled, which I will not do. I will say that things aren’t what they seem, and some of the twists had me audibly gasping. I can discuss the themes the show presents, such as class warfare, what it is to be human and religious connotations to life after death, as well as how far one is willing to go for family. My favorite thematic element might be how they explore life after death in a world where death is almost nonexistent to people who can afford it. There are extended scenes devoted to this, and I ate it up. I’m not a religious person, but I’m friends with people who do hold beliefs and have had deep conversations about topics like this before, and I find them fascinating. I also appreciated the debate over class warfare, and how in this world you can essentially become a god to people just because you’re rich enough to never die. By effect, that theme rolls into the “what it means to be human” discussion. It begs the question, if you are okay with switching between bodies repeatedly and using these “sleeves” as husks, are you human, or have you devolved from that? This is coupled with sex slaves and/or prostitutes that have no care for their sleeves with the promise of a new one if they’re killed when with clients. This brings such a depravity to the world that is truly disturbing and taints any possible ideas that this idea would better society. Never dying, especially to the rich, makes them feel even more untouchable than they do in our current society. There is a lot to unpack in this show, and I might need another run through to get the majority of it. 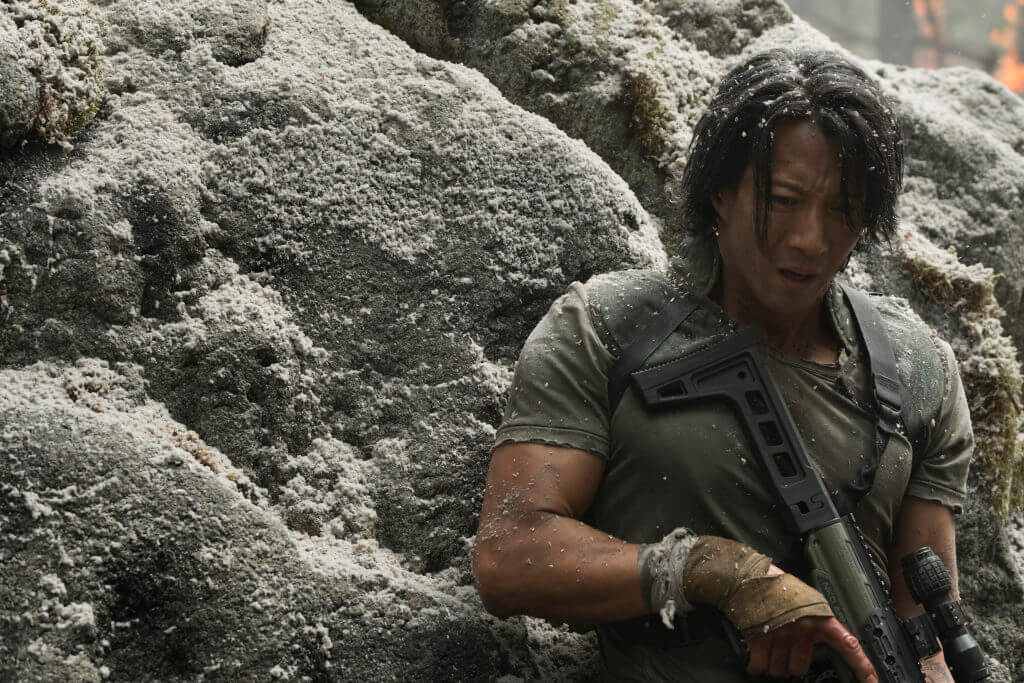 On the note of the actual plot, the first half is very much a sci-fi hardboiled detective thriller, even featuring some noir narration from time to time. The second half has a pretty big twist that changes the game and the stakes. I honestly didn’t see it coming, and obviously I won’t spoil it, but it changed the status quo, not only in upping the stakes, but upping the emotional state of our main characters and capitalizing on some of those themes I mentioned earlier. The back half does exactly what a back half of a show SHOULD do.

The visual effects and world of Altered Carbon are also very much worth discussing. They look PHENOMENAL. Its clear that Netflix really put money into this show because there’s such a grandness to Bay City, and its various boroughs and locales that only movies can accomplish. They do a great job showing the scale of this world as well. On network television, you’d probably get a much more reduced sense of this world, utilizing the same angles and similar shots, but Altered Carbon does a good job of diversifying its visuals. Is the world INCREDIBLY Blade Runner inspired? Yes. But it definitely takes on its own style when visiting the planet Kovacs grew up on, as well as looking at the high city where the filthy rich “meths” live. The architecture in those scenes in particular is really well designed and beautiful when bathed in sunlight. The massive amounts of people living in trailers on the Golden Gate Bridge is an interesting canvas to paint on, although I almost wish they spent more time in this area, as it’s the least fleshed out. There’s also a rich lore for the show, involving uprisings and the technology that humans used to create “stacks” (where the consciousness is stored so people can move from sleeve to sleeve). There’s a lot to explore in this universe, from the past to the present, and they do a solid job laying the groundwork for what can be expanded upon more in future seasons. They introduce so much mythology to the audience in ten hours that the show might have been more ambitious than its runtime could sustain. Some aspects get less explanation than others; I’m still discerning what an “Envoy” really is (although I feel like I might have missed it while sifting though other aspects of the show), as well as how certain characters are capable of superhuman actions. A re-watch might illuminate things I missed, however.

The action in Altered Carbon is where the show, at times, falters, as it can be very “TV.” There’s some rapid cutting, some shakiness and close-up camerawork that got on my nerves. There are sequences that are much better directed, including the final battle, but the bad ones are aggravating. Its disappointing, too, because, from what I could tell, it looked like the actors were doing a convincing job and the choreography looked great. There are a handful of truly great action scenes, though, particularly that final fight I mentioned.

If I had any issue to report outside of the action, it would probably be that it’s a little slow to start. I wouldn’t say it’s boring at all; just that the meat of the story takes an episode or two to really get going. That and – and perhaps this is just something I totally missed – the villain’s motivations could have used much more fleshing out. It seemed like he/she flipped on a dime, and it felt really off. Again, I might have missed it while I was too busy pondering other aspects of the show’s narrative, but it definitely registered as wrong. 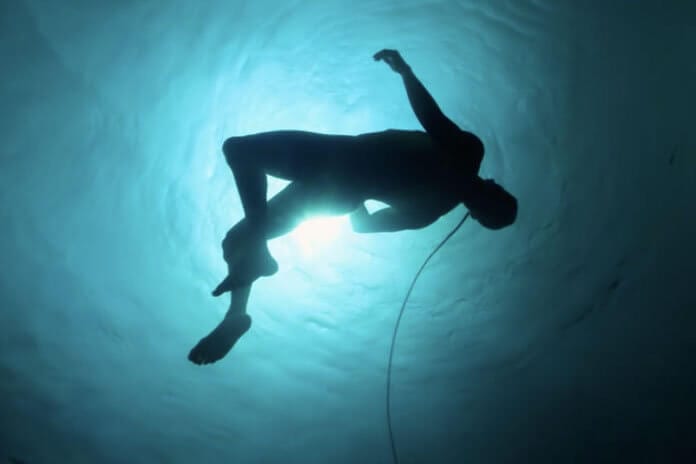 Overall, however, Altered Carbon’s first season is an incredible ride from start to finish, one that I had to force myself to take a break from. It’s engrossing, topical, and incredibly well made, even if it is a bit slow to start. I highly recommend checking this show out if you are remotely interested in the sci-fi genre. I can’t wait for a season 2!

What did you think of Altered Carbon? Let me know in the comments below! Stay nerdy everyone!

Altered Carbon is slow to start, but patience is rewarded with one of the best sci-fi shows on the market, with high production value, complicated characters, and great commentary.

I have been feeling so bored lately, what with the lack of good shows/movies/games. I’d seen A.C. on Netflix before but I just thought it was another sub-par, sci-fi inspired show that they were pumping out just to have content. Definitely up for giving this a watch now. Thank you, Mr. Calkins.