Home  /  Entertainment  /  Television  /  Amazon’s Lord of the Rings: The Rings of Power Series Is Dead On Arrival

Amazon’s Lord of the Rings: The Rings of Power Series Is Dead On Arrival 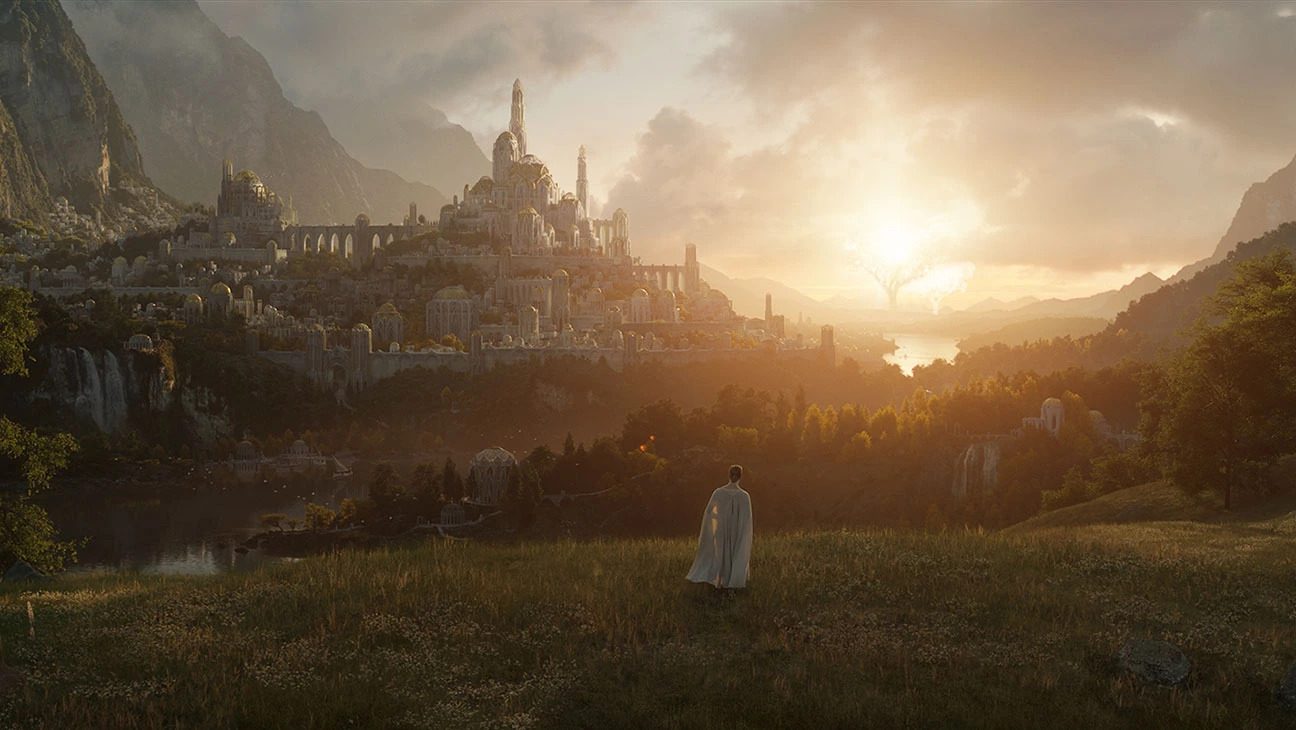 Amazon’s foray into the world of J.R.R Tolkien comes to life as Vanity Fair revealed the first images from The Rings of Power, along with descriptions of what we can expect from those involved with the show.

Let’s start with Galadriel, who is being played by Morfydd Clark, as seen below.

At its core, #TheRingsOfPower takes its biggest cue from the heart of Tolkien’s books. “It’s about friendship,” says McKay. “It’s about brotherhood and underdogs overcoming great darkness.”

This iteration of Galadriel is completely out of step with Tolkien’s writings, as Vanity Fair says Amazon will be introducing an original character for her to interact with. “She’s struggling for survival on a raft in the storm-swept Sundering Seas alongside a mortal castaway named Halbrand (Charlie Vickers), who is a new character introduced in the show.”

The last time we saw an original character added to Tolkien’s film adaptations was during the Hobbit trilogy where the silvan elf Tauriel, played by Evangeline Lily, was introduced, to Tolkien fans furore.

Another issue with Galadriel in The Rings of Power is this next line. She apparently says, “I have to fight,” during a scene in the upcoming show. What battle this is remains to be seen. However, other sources claim Galadriel “had no role in the major wars of the First Age, believing that defeating Morgoth was beyond the power of the Eldar.”

Showrunner Patrick McKay states in Vanity Fair that the driving force of the series isn’t based on Tolkien’s works. “Can we come up with the novel Tolkien never wrote and do it as the mega-event series that could only happen now?”

There have also been several people involved with the show that have departed for various reasons. The Vanity Fair article states Tolkien scholar Tom Shippey “gave an apparently unsanctioned interview to a German fan site that July, opining on what the show could and could not explore. Not long after that, Shippey was no longer involved with the series.”

Actors including Will Poulter and Tom Budge also departed the series. Budge previously stated on Instagram, “After recently seeing the first episodes shot over the last year, Amazon has decided to go in another direction with the character I was portraying.” In addition to those two, the show lost production designer Rick Heinrichs and Amazon head of genre Susan Tal Yguado. Vanity Fair compared these losses to the replacement of Aragorn with Viggo Mortensen in Peter Jacksons Lord of the Rings trilogy – a bit of a stretch, comparing changing Aragorn to an older actor better suited to portraying the character to losing several cast/production members.

The showrunners know precisely what’s at stake when they say, “We know what it’s like to be anticipating something and to be terrified that it won’t be what you hope.” At least they know they will be prepared for whatever awaits them should the series not deliver the desired outcome for fans.

“One of the very specific things the texts say is that hobbits never did anything historic or noteworthy before the Third Age.” Here McKay further states Tolkien’s words don’t have much weight on his version of the story. He wants to introduce hobbits because everyone associates them with the previous blockbuster films. McKay says, “But really, does it feel like Middle-earth if you don’t have hobbits or something like hobbits in it?”

It should not be about feelings. It should be about what the book says and staying as close to it as possible to make it compelling and believable within the universe.

Amazon’s Rings of Power series will also introduce another “original story line” which “centers on a silvan elf named Arondir, played by Ismael Cruz Córdova, who will be the first person of color to play an elf onscreen in a Tolkien project.”

Turns out the “fake” elves of colour is real https://t.co/krp4GZKtWp

The Vanity Fair article states Arondir “is involved in a forbidden relationship with Bronwyn, a human village healer.” However, this goes against Tolkien’s own words in The Lord of the Rings appendices, which Amazon is apparently using for their series. The appendices state, “There were three unions of the Eldar and the Edain: Lúthien and Beren; Idril and Tuor; Arwen and Aragorn.” This wholly fabricated relationship should be ridiculed as much as, if not more, than the one between Tauriel and Kili in the Hobbit movies.

But as it adds representation and diversity to the series, pointing out egregious lore and continuity errors will undoubtedly cause me to receive some form of backlash from woke warriors.

We’re not done, as Amazon is also adding yet another first, with Sophia Nomvete playing the first black female dwarf “in a Lord of the Rings movie, as well as the first female dwarf.”

The only hair style black women are allowed to have in movies these days are massive oblong afros pic.twitter.com/PQpHeDd1cD

However, if you remember the first Hobbit movie, An Unexpected Journey, there were female characters who appeared to be dwarves. They were seen in the city of Dale and also running out of Erebor after the city was attacked by Smaug. So this claim of being the first female dwarf in Lord of the Rings movies is false. Perhaps if they said a prominent dwarf character, it would be true.

The next line from executive producer Lindsey Weber talks about reflecting what the world actually looks like. Weber says, “It felt only natural to us that an adaptation of Tolkien’s work would reflect what the world actually looks like.” But which world are you talking about? Tolkien’s world or current day agendas driven by social justice? The original text seemingly matters little and can be changed at a whim to suit Twitter activists obsessed with representation and diversity. Where in the text does it state these characters exist? It doesn’t; that’s why you had to invent them to push a new story devoid of source material, with a completely different agenda in mind.

Vanity Fair responds to the backlash received after the diverse cast images were released, saying: “When Amazon released photos of its multicultural cast, even without character names or plot details, the studio endured a reflexive attack from trolls.” In response to this, “Tolkien Scholar” Mariana Rios Maldonado said, “Who are these people that feel so threatened or disgusted by the idea that an elf is Black or Latino or Asian?”

I could ask the same question if we were to change a historically Black or Latino, or Asian fantasy to white characters for the sake of diversity. Why not change Black Panther to a white male or Mulan to a white female? The argument is always that now they can see themselves as that character. Okay, then, make Black Panther white so the white audience can see themselves as that character. If it’s not okay to race swap a black or Asian character for a white one, it shouldn’t be accepted vice versa.

The point is, if it’s not true to the story, regardless of someone’s race or gender, then it’s not the same story you claim to be making, in this case, Tolkien’s works.

Finally, the Vanity Fair article speaks about the time frame covered in the series. In Tolkien’s works, it covers thousands of years of history. How will the showrunners tackle this? JD Payne says, “If you are true to the exact letter of the law, you are going to be telling a story in which your human characters are dying off every season because you’re jumping 200 years in time, and then you’re not meeting really big, important canon characters until season four.”

It seems they will be compressing the story for time, which is understandable, as The Silmarillion has periods of hundreds of years of peace between battles. But this following line from Payne is one I take issue with. “Look, there might be some fans who want us to do a documentary of Middle-earth, but we’re going to tell one story that unites all these things.”

The issue is that Amazon can’t use material from The Silmarillion, Unfinished Tales, or other books related to the time periods during which this series takes place. They have rights to The Lord of the Rings and its appendices, which briefly cover the timelines, including the first and second ages, but not in complete detail like the previous books I mentioned. Creating an accurate, complete account of the first and second ages isn’t possible with the material they have at their disposal. So why even do it at all?

As was recently reported, other Tolkien works we just mentioned have gone up for sale. This means if Amazon purchases the rights, they would own multiple works of Tolkien that will allow them to have a stranglehold on what happens to Middle Earth in the foreseeable future.

You can be the judge in deciding whether Amazon is treating Tolkien’s works “with respect” when the first season releases on September 2nd, 2022.