An Interview With Krista Novva 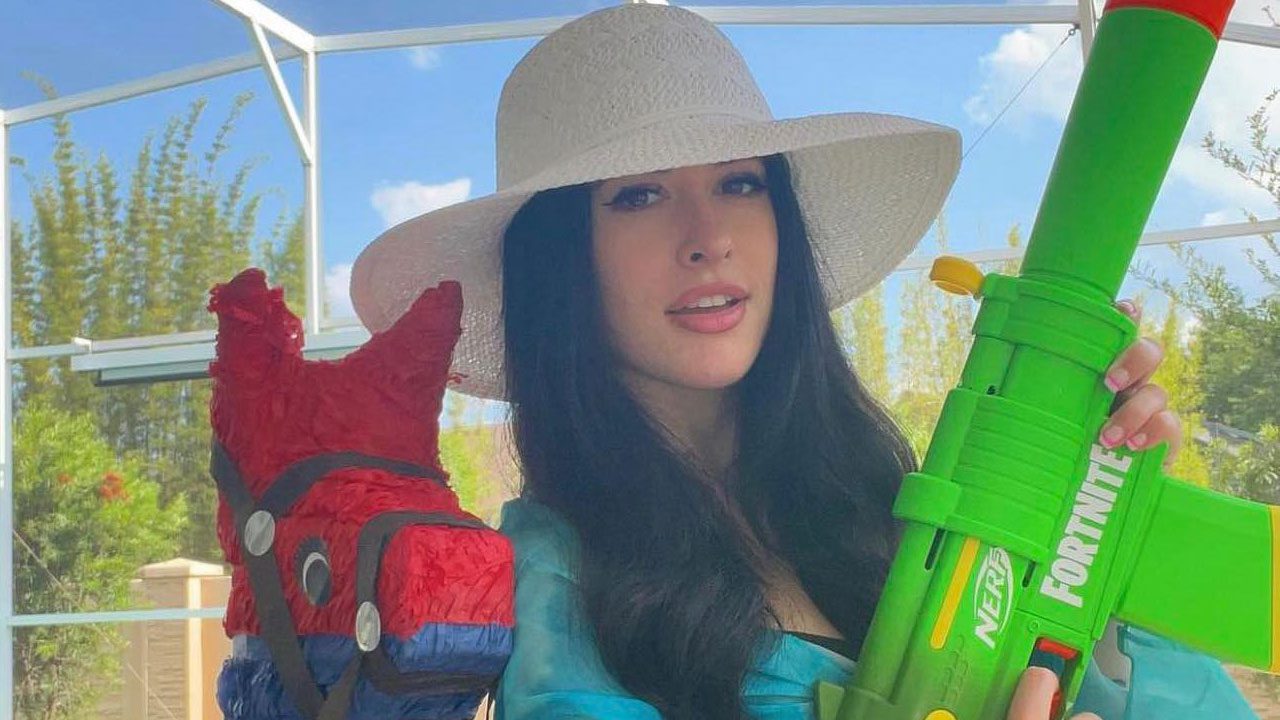 Krista Novva and I finally got our lives together and sat down for a chat!

Blabbering Collector: We will start off easy… who makes the best chicken nuggets?

Krista: At first, for the longest time, and living in Canada… I thought it was McDonald’s.

K: Yeah! But then, when I visited the most magical place, America… it became Chick-fil-A.

BC: You know, I’ve never had any before!

BC: No! Or Five Guys or any of that stuff!

K: In October, that’s about to change.

BC: We’re gonna get fat and happy.

K: I got some gift cards to Chick-fil-A! I’m taking everyone out!

BC: Yeah, Krista’s buying! How did you first hear about Geeks + Gamers, and how did you get into G+G?

K: A lot of stuff! I am in front of the scenes; I am behind the scenes. Think of me as a manager. And I know I like to joke about me being a Karen and making fun of Karens and all of that. But if you need something, if you need something from Jeremy, you come to this face right here. I’m the manager of Geeks + Gamers, and you gotta be a bit of a Karen.

BC: You manage Jeremy.

BC: Can you talk about what an average workday is like for you?

K: Oh my, so every day is different, unfortunately. There are days where I have to get up early, and there are days where I can say, “Okay, I can sleep in a bit.” The busiest days are Tuesdays because of Tuesday Night’s Main Event. It’s a really big show, and there is a lot of planning that goes into that – reaching out to people, finding things to discuss, making thumbnails, all that! You know, there are times on TNME where, right after we play games like Fortnite, sometimes I find myself going to bed at 5:00 AM, other nights I find myself going to bed at 11:00! My days and nights are all over the place!

There are times where I can’t even get back to people right away because I’m doing so much. Let me give an example of what a typical day is, I suppose. So, on a really crazy day, I wake up at, like, 1:00 in the afternoon if I had gone to bed at 5:00 AM. I eat breakfast and then lunch, so it’s kinda like a brunch. I get that out of the way!

K: Exactly! Then, I check my phone and see the news and stuff. I get caught up on a few things, make some thumbnails, reach out to some people. A lot of times, I find myself eating dinner at 3:00 in the morning! I sometimes don’t even have time to eat dinner! I’ll be working so much, and I’ll be like, “Oh yeah, I forgot about dinner!”

BC: That’s crazy! How do you balance your personal and work life?

K: Well, you know, it’s really great that I am at home working, but what I do online is my work. It’s just my entire life at this point. There is no balance, really; this is what it is. That’s why I say things like, “I eat dinner at 3:00 AM,” because I’m just working, working, all the time!

BC: Do you have a personal life?

K: Even before then, I didn’t really have a personal life. I’m someone who likes to stay at home; I never go out and do stuff. Like, I went to my first aquarium not too long ago!

K: Yeah! Like, look, we have an aquarium here, but it is nothing grand. This computer is my outside world. I’m fortunate enough to be working on this. I’m online, but I’m working.

BC: How did you get into Twitch streaming?

K: Twitch streaming is actually something that I thought about. I’m someone who likes to do stuff outside the box. Everyone at the beginning was on YouTube. No one was really on Twitch. I had asked Jeremy at the time what Twitch was because I noticed that we had one. And he told me it was a platform for playing games. And I thought, “Okay, I want to do that.” I’m not good at making videos talking about articles or certain things, so I thought, “Okay, I’m going to go into gaming.” So with that, I started my own channel. But before then, I was actually running, all by myself, the G+G Twitch. No MarioKart; this was way before that. I was on there just playing games, and it was a blast! And when people saw how successful it can become, that’s when everyone else started to come in. That’s when MarioKart started on Twitch.

BC: What kinds of video games do you like? How do you choose which games to stream?

K: So, in the beginning, I enjoyed Minecraft and Fortnite. But nowadays, I am very fond of Nintendo games. Although I do love Call of Duty. Cold War is my absolute favorite! I need to get back on that because I love that!

BC: You should get the new one when that comes out, and we can all play together in October!

BC: And Warzone is free to play, by the way.

K: I do have Warzone; it was a really, really big upload. I gotta get on that! There are so many games I’ve got to play, but I’ve just been grinding away on Fortnite. Which by the way, Dragon Ball Fortnite just came out, which is why I am so hyped. If you thought I was addicted before, I’m a thousand times more addicted now! I’m excited.

BC: What do you think makes a good game?

K: I know this may sound stupid, but something that is enjoyable to play!

BC: I already know that you like to collect, but do you have a focus? If so, what is it?

K: Typically, I love stuffed animals; plushies are my go-to! But my all-time favorite thing to collect is Dragon Ball figures. I always tell myself, “Wow, Krista, you have too many!” But at the same time, I’m like, “You don’t have enough!” That’s how the addiction starts!

K: Oh, wow! Well, recently, I have dug back into my YouTube channel, so I would say my goal is to reach 15k subscribers!

BC: I bet you can do it. How did you get into anime?

K: Oh, my goodness. Well, I think we’ve all seen an anime  in our lives, like Pokémon, Dragon Ball Z, etc. I grew up watching Sailor Moon and Pokémon. It wasn’t until a few years ago that I got into Dragon Ball Z, and the reason for it was because it gave me nostalgia and comfort. I made a video on this, but I need to re-upload it because it was on my second channel that no longer exists.

BC: Alex wants me to ask you about Rob Schneider.

BC: Were you ever into Star Wars or Marvel?

K: I wouldn’t say I’m a hardcore fan; even to this day, I wouldn’t consider myself that. I like both! I don’t know much of the lore, but I’m a general fan!

BC: So you could say you grew up watching them and saw The Avengers in cinema and all that?

BC: Do you know the difference between Parmesan and Parmigiano Reggiano?

K: No. I know that it is so awful; being Italian, I probably should!

BC: Do you have anything you want to say to your fans and viewers?

K: I love you all so much; I wouldn’t be here where I am today without you guys! Same goes to the G+G; you are all amazing! Thank you, Jeremy, for creating this amazing team and putting up with all of us. Thank you!

Speed Round – Short Answers Only

BC: Would you rather eat mud or go vegan?

BC: Disney or Universal?

BC: Food shopping or clothes shopping?

K: Villains series by Serena Valentino. I thought it was the most original thing ever because she’s taking these characters and doing a whole twist on it, yet keeping it all canon. I really enjoyed them a lot.

BC: Cats or dogs?

BC: What is your go-to snack?

BC: Packing or unpacking?

BC: Mario or Luigi?

BC: Running a mile or cleaning?

K: Oh… purple. Like a light lilac, it would be.

BC: Would that be your lightsaber color?

K: Yeah. Actually, I do have one, and it is purple!

Twitter: How did you feel when you met Gina Carano for the first time?

Krista: Oh gosh, it was surreal! I was so nervous; she is so, so sweet. The way she presents herself on video, online… she’s exactly that person! She’s probably one of the sweetest people I’ve ever met in my life, to be honest. After getting to talk with her, she just makes you feel really welcome and comfortable. She gives you a really big hug. From then on, it was just, oh my gosh!

BC: BFFs for life!

T: JHaleStorm would like me to ask you: “Hello?”

T: What is your favorite number?

T: How come you don’t swear?

K: Umm, I just never did. I like to think that it isn’t very ladylike. I also like getting emails from parents reaching out to me saying things like, “My kid watches you, and I appreciate the fact that you don’t swear.” Stuff like that warms me.

K: Exactly! You want that, come to my channel!

T: When are you moving to the US? And which state would you choose?

K: Ooooo! That is currently in the works right now. Honestly, for the longest time, it was always Florida. But after recently visiting Texas, I was thinking, “This place would be a great place to live!”

K: I actually do not. I have one that was given to me, a Demon Slayer Blu-ray… which, I don’t even think I have a Blu-ray cassette player…

BC: Cassette? Did you just say Blu-ray cassette player?

K: Yeah, you can tell I lost my touch with tech.

T: One has to go forever; which is it: Nuggies, pasta, or steak?

T: When are you going to cosplay as Darth Barbie?

K: Ooooo, that was my original username. I like to say that I am Darth Barbie, ya’ know? The dark hair, the attitude… well, maybe not. I used to consider myself a Sith, but as time went on, I’m more a Jedi. Maybe one day, I will make my own Darth Barbie.

BC: Are you going to chop off all your limbs?

BC: Yeah, who needs those? Just chop them off, wheee!

Great interview! Love to hear all about Beep!

I’m italian and in italy and i still don’t know the difference between Parmesan and Parmigiano Reggiano :D :D :D