Animation Rewind: 20009 Edition – Coraline and the Birth of a New Studio Welcome to the first installment of Animation Rewind: 2009 Edition, where I’ll revisit animated films that were released ten years ago. Today, I’m taking a look at Coraline, Laika’s first animated movie, and the one that launched it into mainstream animation.

Before we delve into the film, let’s take a look at Laika’s origins. The studio was founded by “the father of claymation,” Will Vinton, a veteran animator who pioneered the use of clay to create vivid animated characters and stories. For over 30 years, Vinton Studios was responsible for creating many classic commercials, like “The California Raisins” and “M&Ms.” Vinton also won an Oscar for his short film “Closed Mondays” and developed many TV series. By the early 2000s, looking to expand his operations, he turned to an unlikely investor: Nike’s CEO, Phil Knight. Knight obliged and gave Vinton Studios $5 million and became a shareholder of the company. He also asked for a position for his son, Travis, a failed rapper that went by the name Chilly Tee. Unfortunately, mismanagement and the rise of CGI animation put Vinton Studios in trouble. When Will asked for more money, Knight outright bought the company and put his son in charge. They ousted Vinton from the company and took the rights of all his creations. Afterward, they renamed the studio Laika and focused on creating stop-motion films, of which Coraline was the first. (To read a more detailed account of this story, I recommend Zachary Crockett’s excellent article, “How the Father of Claymation Lost His Company.”) Now in complete control, Phil Knight invested $180 million to create a state-of-the-art studio and courted top talent for it. That included famed director Henry Selick, notable for helming Tim Burton’s classic, The Nightmare Before Christmas. Now, he’d be in charge of bringing Laika’s first animated film to life.

Based on Neil Gaiman’s best-selling novel, Coraline plays like a spookier Alice in Wonderland, where a lonely girl, unhappy at being ignored by her parents, finds a mysterious portal in the house they just moved into. The portal takes her to another world, where everything seems the same as her world, except that here, her parents are completely devoted to her, and they have buttons instead of eyes. At first, Coraline loves this new world and even ignores the weirdness of the buttons. She finds everything beautiful; even her annoying neighbor, Wybie, is not annoying in this new world. But afterward, the Other Mother tells her that if she wants to stay, she needs to sew buttons into her eyes. Coraline escapes, but when she goes back to her world, she can’t find her parents and is warned by three children’s spirits that the Other Mother wants her soul. Coraline goes back to the Other World with a cat and the Other Wybie as her only allies. There, she will have to be brave and smart in order to defeat The Other Mother, rescue her parents, and set free the children’s spirits. Even with a controversial origin story, it’s undeniable that Laika made a splash in the film industry when it released Coraline in February 2009. Neil Gaiman’s novel was the perfect source material for a stop-motion film, and all of Coraline’s mystery, strangeness, and outright frights come to life masterfully in the movie. Selick and his crew truly went above and beyond in delivering a fantastical and layered story that gave a new spin on the old mantra: be careful what you wish for. From the get-go, it’s important to notice how serious and creepy Coraline is. There’s almost no humor (except for the cat), and Coraline’s eccentric neighbors give the whole story an unnerving aura. When you compare Coraline to other stop-motion films like Selick’s own Nightmare or Tim Burton’s Corpse Bride, you have some spooky elements, but they are mostly family-friendly stories with songs and humor peppered throughout them. In Coraline, there are many moments of beauty (particularly the scenes when Coraline first enters the Other World), but as I stated before, there’s almost no humor, and the film is committed to showing the horror that this fantasy world truly has underneath.

Technically, the movie is a marvel to behold. The characters in the film are well-realized and layered. Coraline is not a doe-eyed, poor little girl. She’s actually curious and adventurous, but can also be intense and annoying. Likewise, her parents are not perfect, and I think that makes their relationship more believable. It also highlights the bizarreness of the Other World, where everything is seemingly perfect and everyone is devoted to Coraline. Moreover, the whole neighborhood lives in a kind of stasis, and the more the story unfolds, you understand why. They’ve lived with trauma for a very long time. The disappearance of the children has cast a shadow on them, and even if they don’t know there’s a malignant force behind it, everyone lives under a kind of tension. Only when Coraline defeats the Other Mother and the children’s souls are set free does everyone begin to move on. That’s conveyed at the end when Coraline and Wybie go to the latter’s grandmother (whose sister was one of the kids that disappear) to tell the story. The mystery is solved, and everyone can move on. 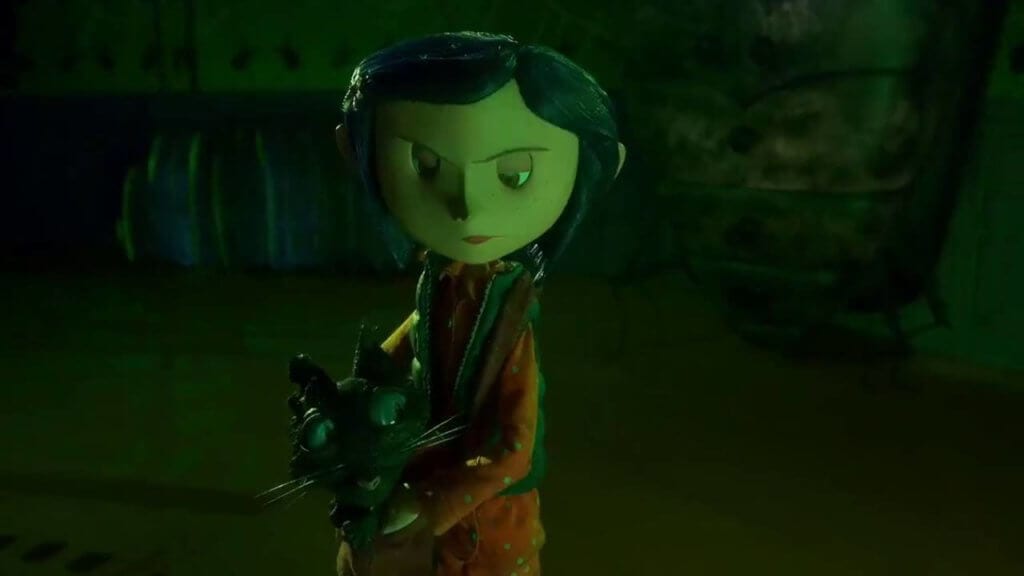 Every set, every prop, and every design is painstakingly constructed and animated. Animation is a time-consuming endeavor, but stop-motion requires a whole other level of patience. You can see the artists’ commitment, from grand scenes like the one in the garden between Coraline and the Other Father to subtle moments like a tear or a smile on Coraline’s face. The voice cast is equally impressive. Dakota Fanning gives a lot of personality to the title character, and Teri Hatcher is equally nurturing and menacing as Coraline’s mother/Other Mother. Keith David is superb as the sarcastic cat that, deep down, cares about the girl. Jennifer Saunders, Dawn French, Ian McShane, John Hodgman, and Robert Bailey Jr. are also good in their respective roles. The music by Bruno Coulais is absolutely beautiful and gives the film a spooky yet hopeful aura.

Coraline opened to critical acclaim and good box office numbers. More importantly, it gave audiences around the world a mainstream animated film told with a different technique than the predominant CGI. This also signaled the arrival of Laika as the standard-bearer of stop-motion animation in the United States. Its following films have also been met with acclaim but declining box office success (their latest film, Missing Link, completely flopped). Moreover, many troubling complaints have surfaced about how workers there are treated that should be addressed immediately in order to ensure that this studio survives and keeps telling different stories that are visually appealing and set apart from the usual animated fare. In the ten years since its release, Coraline has become a classic and a clear indicator of what stop-motion can offer.