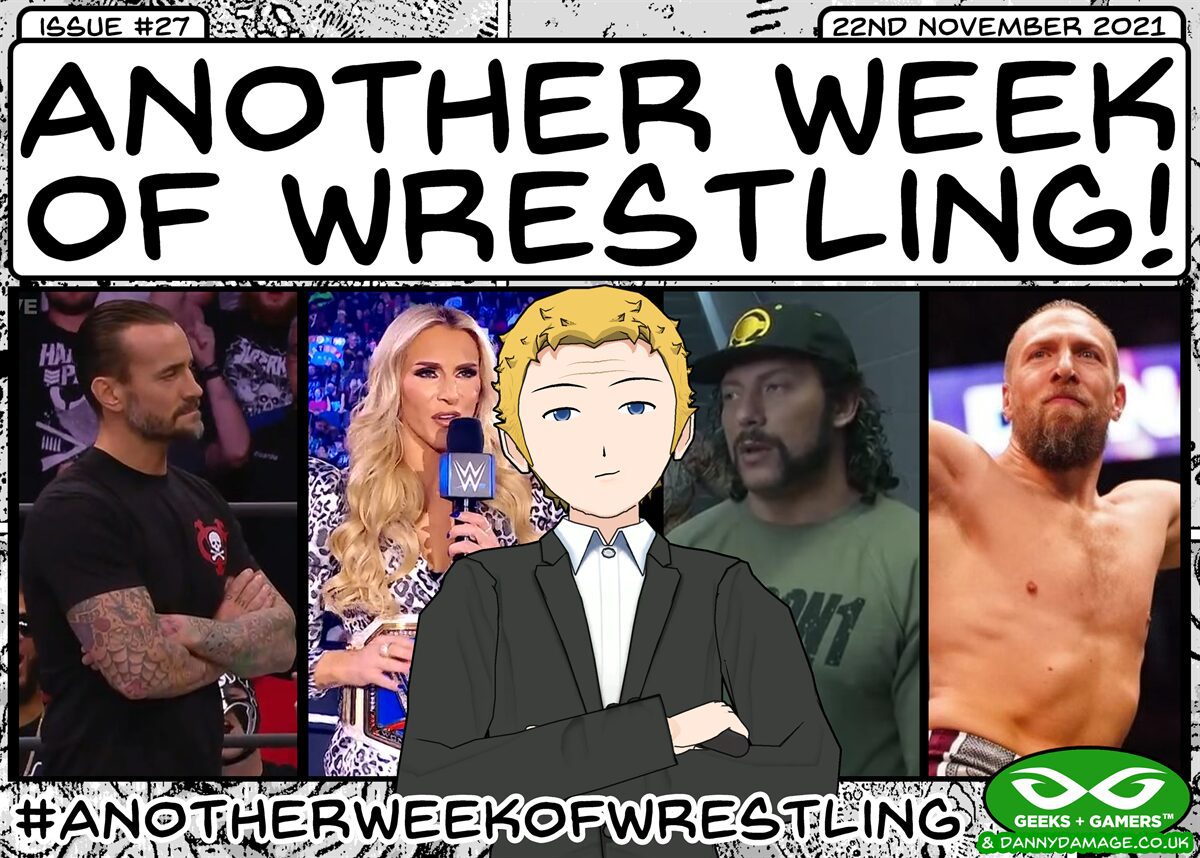 I discuss Bryan Danielson, CM Punk, Survivor Series, wrestling news, results, and more! Welcome, and thanks for joining me at Geeks + Gamers!

As well as previously bringing you That’s Not Wrestling and ranting about PPVs on YouTube, I’m here to mouth off on a Monday about wrestling news, results, and events that catch my eye, ear, and sometimes my nose. I’m Danny Damage, writing for Geeks + Gamers, and this is Another Week of Wrestling for November 22nd, 2021!

Big E & Matt Riddle vs. The Usos lasted five minutes before Big E threw one of the Usos at Seth Rollins, who was sat at commentary; this provoked Rollins to cause a disqualification, which led to a 3-on-2 beat down. Randy Orton made the save, and a six-man tag was made during the commercial break. It’s a good job all this happened; it appeared that nothing else was booked for the show.

The matches’ final form was Big E & RK-Bro vs. The Usos & Seth Rollins. A pair of rolling elbows to the back of Riddle’s neck from Seth was enough to earn his team the victory.

Bianca Belair vs. Tamina “Strangler Jr.” Snuka. Bianca hit the Kiss of Death for the win.

Becky Lynch verbally put down Charlotte Flair ahead of their match at Survivor Series; they’re both work-shooting on each other pretty hard now. Liv Morgan reminded Becky that she’s now next in line for a title shot and that she’ll be watching the champion very closely.

Street Profits vs. Alpha Academy. The Profits won after Montez Ford rolled through a high-cross-body and pinned Chad Gable.

Nikki Cross vs. Zelina Vega. They flailed around for a few minutes; a Code Red from Vega put a stop to Cross. This segment was like a bumper pack of two DVDs stuck together in a bargain bin, as the women inside the ring switched with those outside the ring, and we got Rhea Ripley vs. Carmella next. Rhea’s Riptide ruined Carmella. Nothing fancy, nothing unexpected. Someone should really tell Vega that Australians despise royalty, so I’m unsure of her choice at attempted-posh accents. 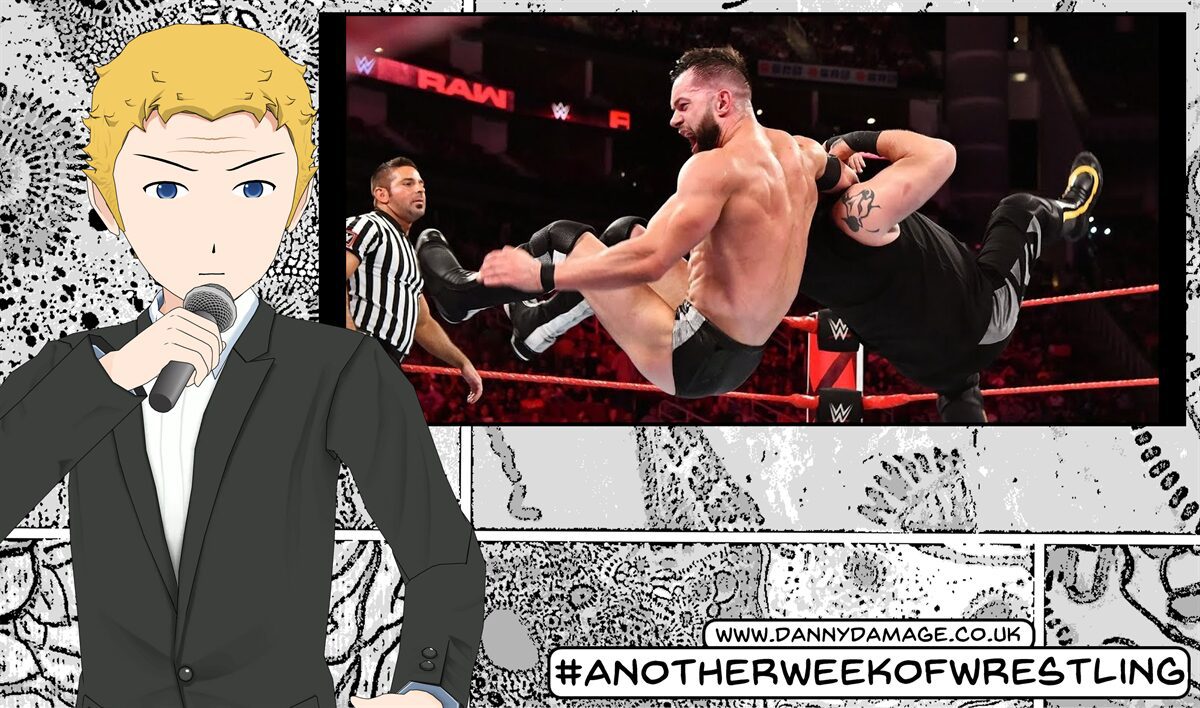 Finn Balor vs. Kevin Owens. As per usual, Balor behaved like and employed the move set of his demon form, but whatever. It was a decent match, and Owens put Balor away with a stunner. Owens has always been much better as a heel.

The Dirty Dawgs vs. AJ Styles & Omos. This was just a high-profile squash match, evidenced by Omos ruining Ziggler and Roode with little effort. AJ finished off Ziggler with a Phenomenal Forearm.

Rey Mysterio vs. Bobby Lashley. Rey flew around for a while and reversed everything, as usual. This was until Lashley kicked out of a pin with Rey in his arms and then turned it into the Hurt Lock for the win. Post-match, Adam Pearce appeared and removed Rey from team Raw and replaced him with Austin Theory, who ambushed Dominic Mysterio moments before.

Tony D’Angelo vs. Dexter Lumis. A thumb to the eye opened the door for D’Angelo to pick up the win here. Lumis was jumped by Carmello Hayes and Trick Williams before Johnny Gargano turned up to help. He was too late, however, as they crushed Lumis’ hand with a chair. Gargano tried to call Hayes back out, but Pete Dunne showed up instead. Next week Gargano, Dunne, and Hayes will face each other in a triple threat match for the North American championship.

The Creed Brothers & Roderick Strong vs. Jacket Time & Odyssey Jones. “We’ve had a week to think about it, and we’re sticking with ‘Jacket Time,’ are we?” -Wade Barret. A running cross-body from Jones flattened Strong for the three-count.

Why is NXT making us sit through a fake poker match in the middle of a wrestling show? Oh yeah, because WWE is in bed with Draft Kings, and Vince McMahon is a whore. If WWE cared half as much about pro-wrestling, so many more of us would enjoy this show. Instead, we got Cameron Grimes vs. Duke Hudson in a poker showdown. 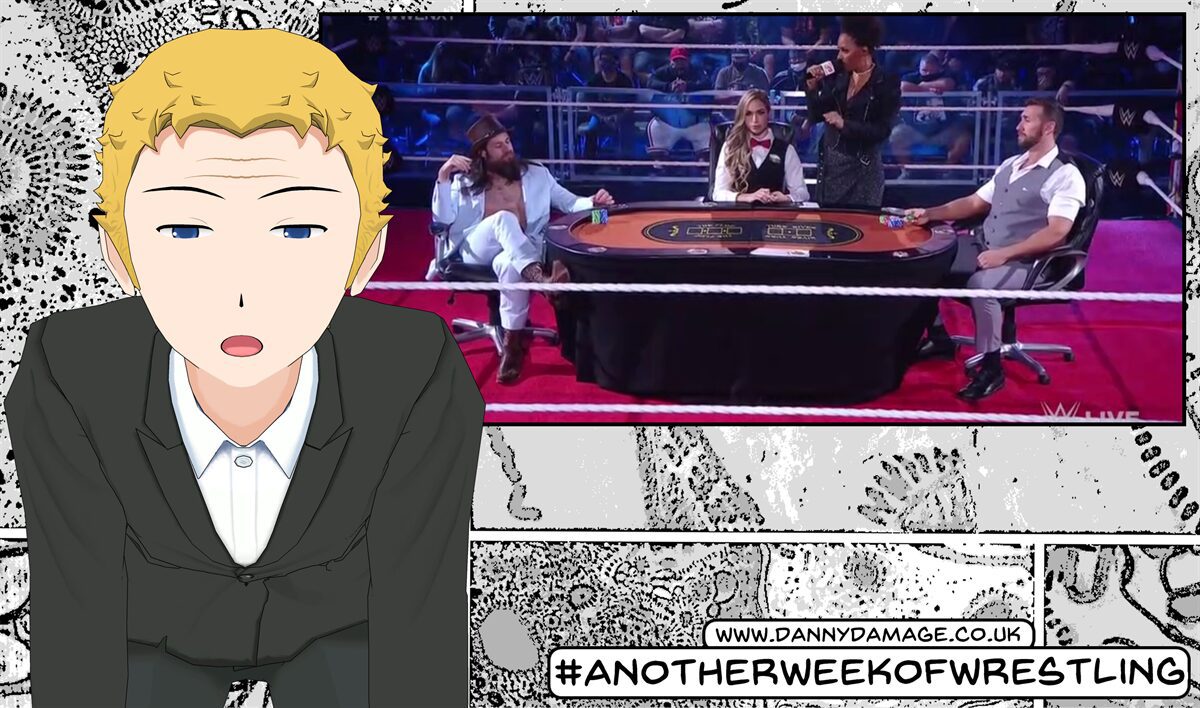 The only good thing about this whole segment was Alicia Taylor getting to do more than the bare minimum. After some lame comedy pain, Hudson got worked, and he sulked by power-bombing Grimes through the poker table, as well as finding some scissors to cut Grimes’ beard and hair.

Josh Briggs & Brooks Jensen vs. Kyle O’PTSD-Reilly & Von Wagner. Kyle and Wagner won with little trouble. Kyle has begun to worry that Wagner’s already making plans to abandon him for the main roster/elsewhere too.

Lashing Out? I think I’d rather bleed out than watch any more of that shite.

Raquel Gonzalez vs. Dakota Kai. It was looking like Gonzalez was close to victory, but Toxic Attraction appeared and caused a DQ when jumping her. Cora Jade had a go at helping out as she swung her mini skateboard around, but the numbers were too great. Eventually, Zoey Stark and Io Shirai evened things out, with Io shouting “WAR GAMES” as NXT went off the air. I feel like that escalated a bit suddenly.

Good news, everyone! Kenny Omega and his face like a slapped arse announced that he’s all banged up and that he’s leaving town for a bit. Fingers crossed he gets swept up in something else while he’s away, and he never comes back!

“Hangman” Adam Page came out to celebrate with The Dark Order. Bryan Danielson joined them, and he’s now a heel. Good stuff! Wrestling news is always more fun when Bryan gets to have fun and take the piss out of people. Remember how good he was as SmackDown’s champion with the hemp belt and lectures on the rest of us being greedy, wasteful, inconsiderate pricks? Bring it on! 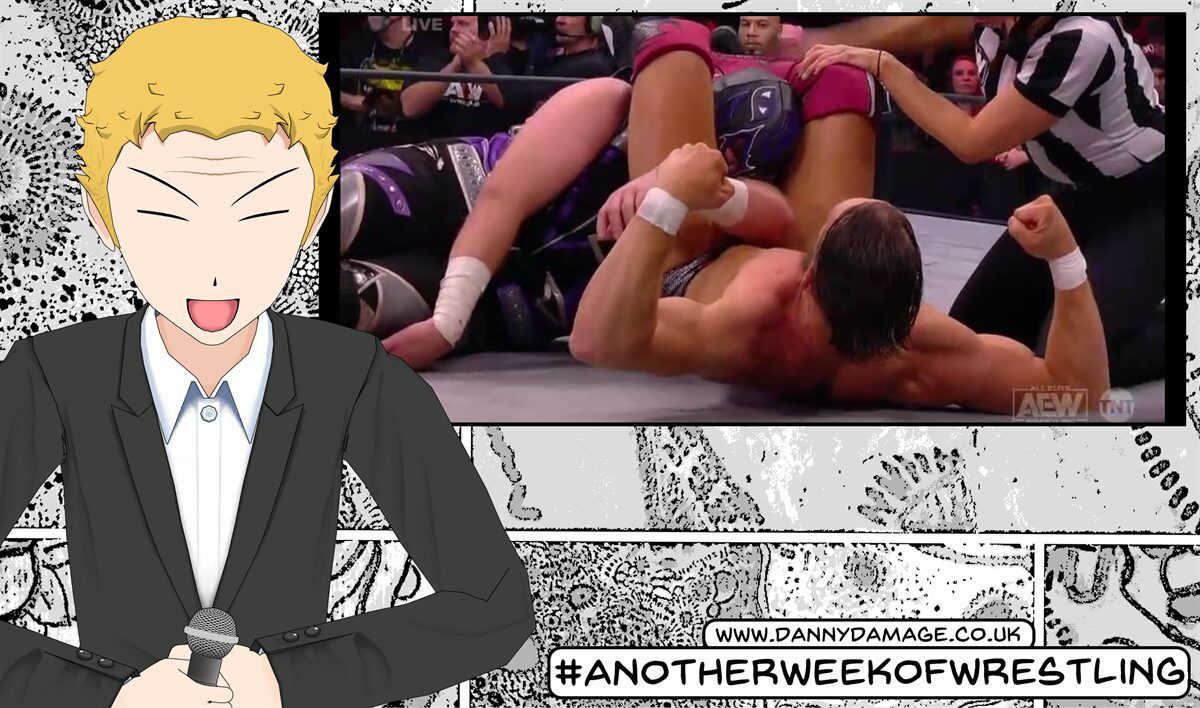 Bryan Danielson vs. Evil Uno. It took too long to wreck a flunky, but a shotgun knee, some head stomps, and a triangle hold aided Danielson in his TKO victory. Bryan posed when applying the submission, and after the match, he threatened the rest of Page’s support group. AEW is in Chicago next week, so Colt Cobana’s next on Bryan’s list.

The Butcher & The Blade vs. Orange Cassidy & Tomohiro Ishii. A Brainbuster from Ishii on Blade did it. Butcher and Blade aren’t the worst in AEW; they’re just misused. I can see the logic in some of the things they start to do, but then that gets scrapped so they can coil together and catch someone or put over someone beating them up with their hands in their pockets.

Nyla “The Hairline Never Lies” Rose vs. Hikaru Shida. A Stretch Muffler made Shida tap. Serena Deeb got involved a few minutes before the finish, which should have been the end there and then, but they dragged it out longer, for some reason.

MJF destroyed the local crowd; he said he deserves to be the AEW champ, and there’s nobody on his level. CM Punk begged to differ and joined MJF, Shawn Spears, and Wardlow in the ring. MJF tried to butter Punk up with a handshake, but Punk just smirked at the situation, turned, and wandered off, chuckling. 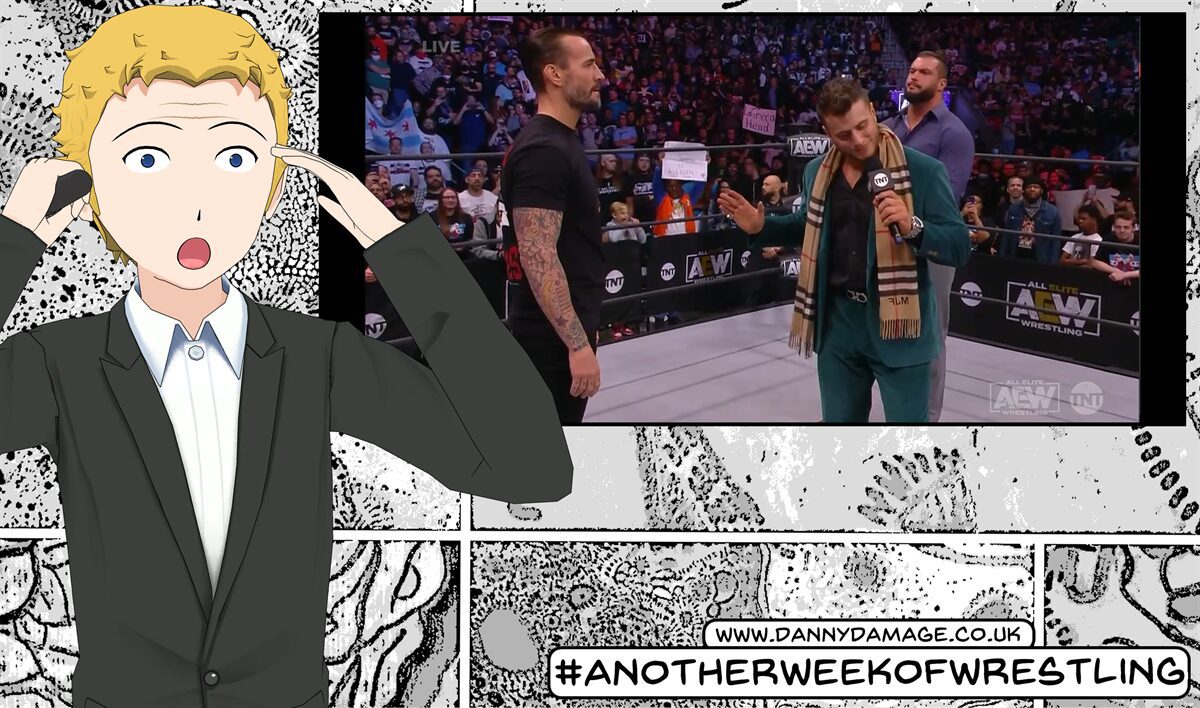 Lio Rush & Dante Martin vs. The Acclaimed. Martin and Rush won, and Team Taz re-invited Martin into the fold. A bit of Max Caster on the mic before a match is always appreciated.

Sammy Guevera vs. Jay Lethal. Sammy’s GTH dropped Lethal for the three-count. Great match, but I’m unsure where Lethal goes from here… if he’s sticking around. Tony Nese looked on from the crowd again. And, of course, as an established pattern found each week in wrestling news, Chris Jericho waddled out and latched onto the limelight of relevance.

Roman Reigns and The Usos gloated about taking Queen Xavier Wood’s cosplay king outfit last week. Woods objected from the ramp and took things seriously for a moment. This was until Roman and co. started destroying Woods’ props. By the time there was just the toy crown remaining, Woods ran into the ring and was beaten down for his efforts. He was also forced to watch Roman stomp the crown into pieces.

Sheamus vs. Jinder Mahal vs. Cesaro vs. Ricochet. Thanks to Ridge Holland’s distraction, Sheamus KO’d Cesaro with a Brogue Kick. This made Sheamus the final team member for SmackDown at Survivor Series. 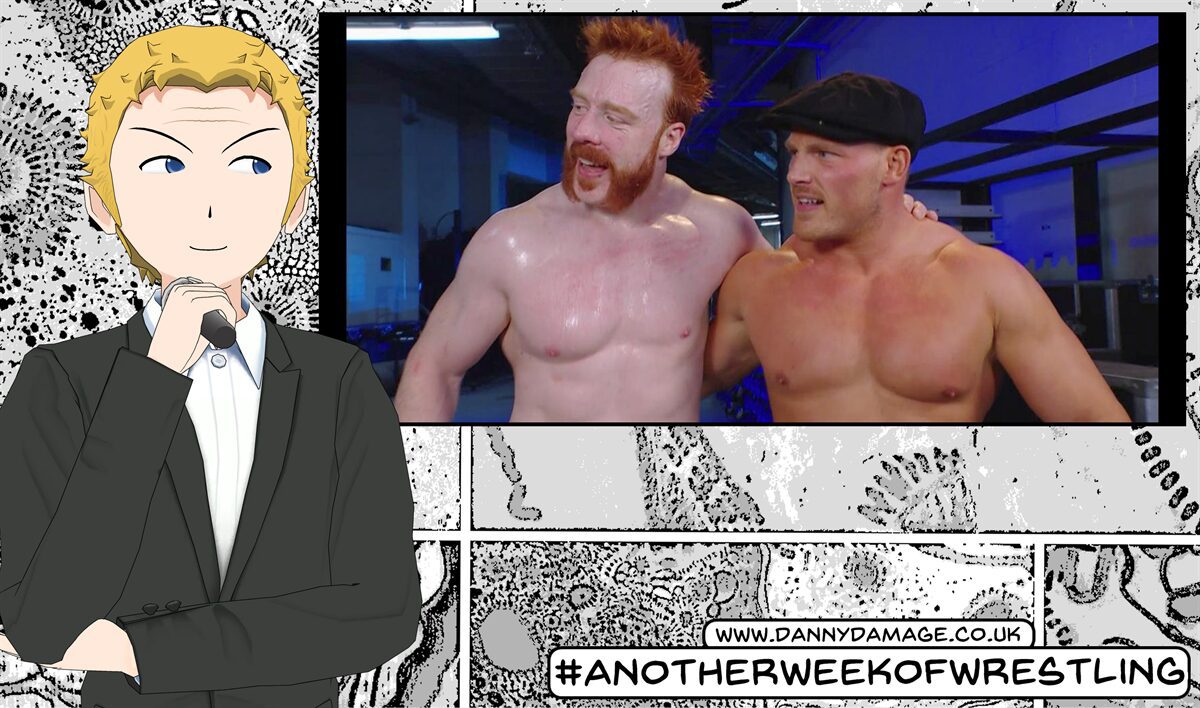 Naomi & Aliyah vs. Shayna Baszler & Natalya. After a couple of minutes, Natalya rolled up Naomi, and the (paid off by Sonya Deville) referee fast-counted her shoulders.

Jeff Hardy vs. Madcap Moss. For whatever reason, Drew McIntyre decided he’d stand in Hardy’s corner for the match. Hardy rolled up Moss after a few minutes.

Sasha Banks vs. Shitzi Wetfart. A modified Bank Statement secured the tap-out win for Banks. To be fair to Shotzi, she’s much better as a heel… so far.

The Bloodline set a trap for Xavier Woods, but Big E showed up and spoiled their plans. Woods and E stomped a mudhole in Roman and knocked Drunky and Jay Uso around before they scarpered off up the ramp.

Darby Allin vs. Billy Gunn. Did I miss something? The Gunn Club turned on Paul Wight several months ago, silently vanished, then returned recently to confront Darby. I feel like I fell asleep in the car on the way to the thing. Anyway, Billy Gunn took his time and chucked Darby around for a while. After a brief comeback and two Coffin Drops, Darby upset the veteran. I think this was setting up Gunn vs. Sting down the road more than anything.

Jade Cargill vs. Red Velvet. This match had huge cringe/injury potential. Both women are promising, but they’re still a bit inexperienced for TV in front of (potentially) millions of viewers. Cargill smashed Velvet and pinned her.

Backstage, we learned that CM Punk listens to and gets at least some of his wrestling news from Jim Cornette’s podcasts! 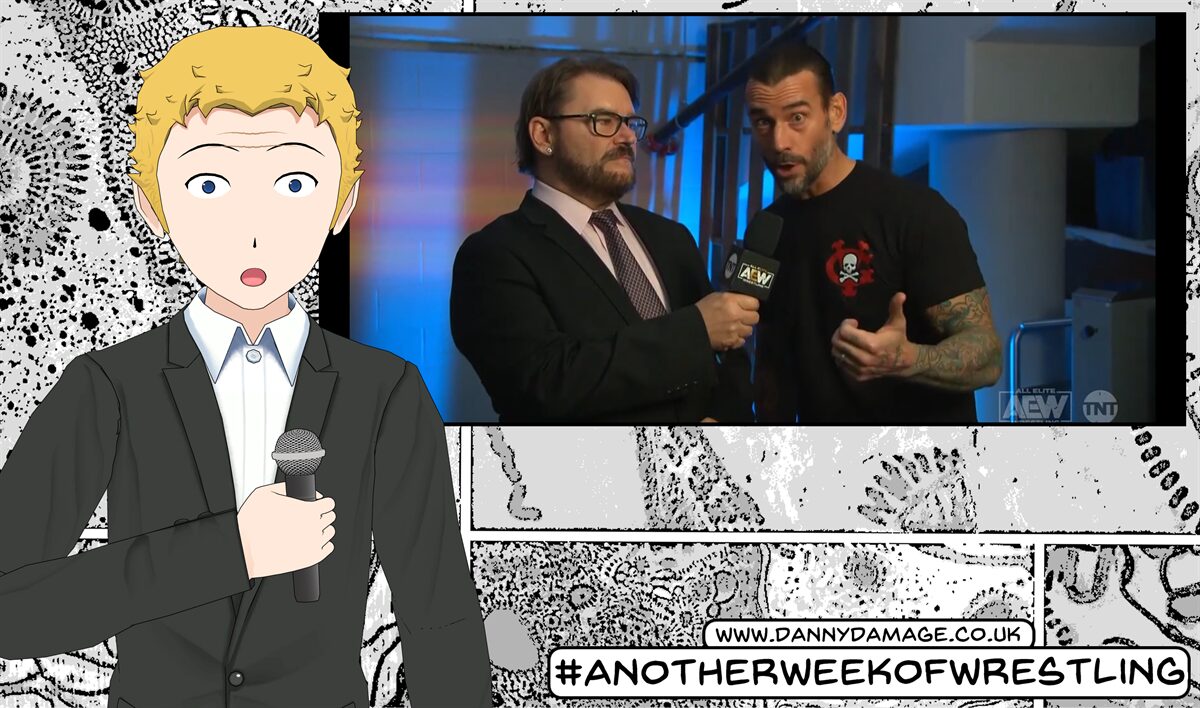 Adam Cole & Bobby Fish vs. Jungle House Party. Fish tapped to Jungle Boy again, and the focus of this scenario is more on how much of The Undisputed Era we’re getting in AEW. The Young Bucks told Kenny Omega they’d hold the fort while he was gone, but Adam Cole seems keen to use the Bucks and take the spot himself.

That’s it for wrestling news this week. Digest and discuss! If you’re interested in a quick natter, or just to throw a passing insult, feel free to get in touch down below or over on Twitter.  Thanks for reading; take care, and I’ll see you next Monday to discuss #AnotherWeekOfWrestling!

The amazing black and white background artwork that I’ve mucked around with was designed by Rachael Hope!

Please subscribe to my YouTube channel, my Twitch channel, and consider buying me a Kofi! You can also click below to be warped to my personal homepage: