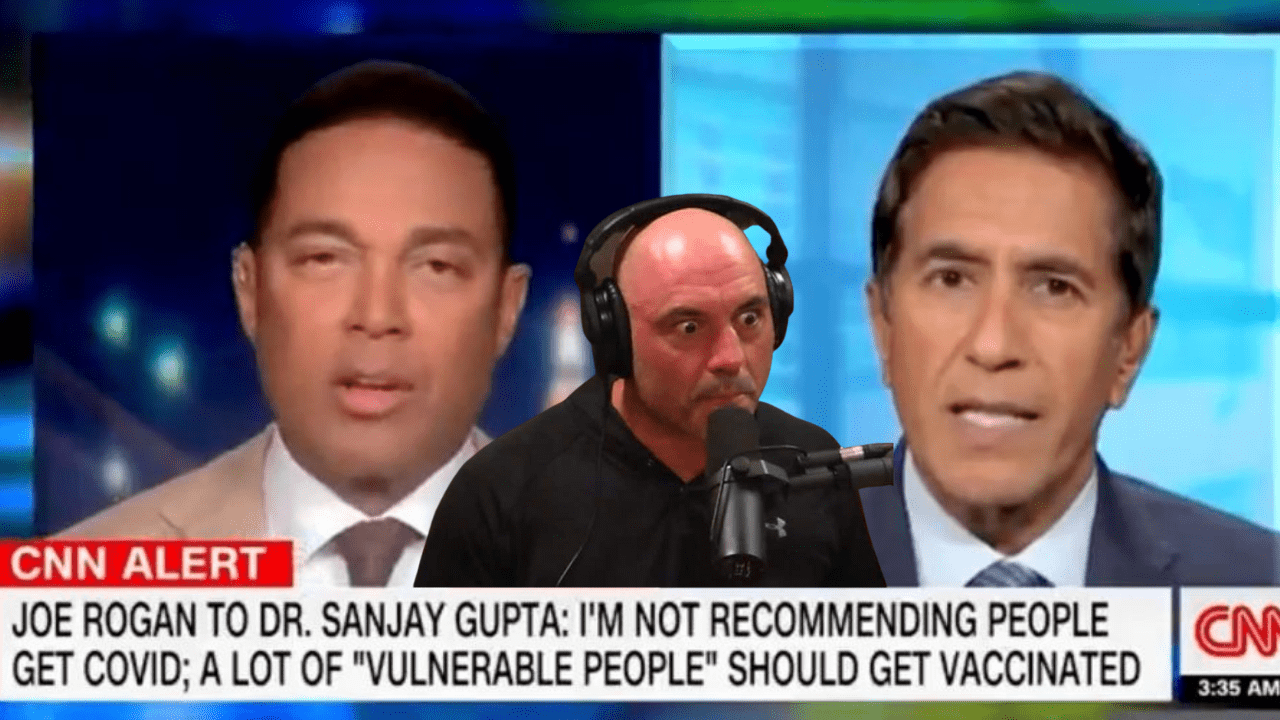 On the October 13th episode of The Joe Rogan Experience, CNN’s chief correspondent, Sanjay Gupta, was on the other end of the Rogan flamethrower and had to answer for the lies of the network that once presented itself as “The Most Trusted Name in News.”

Many topics were discussed during the over-3-hour conversation, and Dr. Gupta did fine. He’s a charismatic guy who skirted a ton of questions and never admitted that CNN is a building built on lies, but when he was cornered about Joe’s very publicized usage of Ivermectin and the way CNN spun it as “horse de-wormer,” the good doc was visibly shook. Rogan accused the network of flat-out “lying” about his COVID-19 treatment, saying the wall-to-wall coverage of his use of “horse de-wormer” was a “lie that they’re conscious of.” Rogan continued, “It’s not a mistake. They’re unfavorably framing it as a veterinarian medicine.” Gupta tried to pivot to the FDA tweet that told people to stop using the veterinarian variation of Ivermectin, as if people were actually doing that in a large enough group to be relevant.  If you want to talk data, the lack of that sample size is evident.

Joe Rogan asks Sanjay Gupta if it bothers him that CNN outright lied about Rogan taking horse dewormer to recover from covid. This is fantastic: pic.twitter.com/PEgJqIXhSD

Knowing the effects of Ivermectin on the body, as it won a Nobel Prize for Medicine in 2015 and being prescribed it by his doctor, Joe pushed back on that faulty claim by noting that the drop stops viral replication in-vitro. “Why would they lie and say that’s horse de-wormer? I can afford people medicine, motherfucker. Don’t you think that a lie like that is dangerous on a news network when you know that they know that they’re lying? Do you think that’s a problem, that your news network lies?” Rogan asked of the practicing neurosurgeon.

“Well, I don’t, I don’t…” noted Gupta, perhaps suffering a stroke. “Dude, they lied,” said Rogan. “They lied and said I was taking horse de-wormer. First of all, it was prescribed to me by a doctor,” noted Joe before Sanjay meekly chimed in, “They shouldn’t have said that.” “[CNN is] making shit up. They keep saying I’m taking horse de-wormer. I literally got it from a doctor.”

Also discussed was something else Rogan got in hot water about: young, healthy people getting the vaccine. Noting that “young boys face a higher risk of myocarditis from the vaccine than they do from getting COVID,” Rogan went on to question if the medical experts know what the “long-term” effects of myocarditis (which Gupta copped to earlier in the conversation) are if someone were to contract it from getting one of the jabs. A brief clip of the exchange is below.

Without commentating on the podcast blow for blow, know that there is a lot of interesting discussion had, and the feeling afterwards was one of mutual respect. Gupta claims in this tweet to have faced stiff pressure from his friends on the “tolerant left” to duck doing the show, but he didn’t. I won’t praise him for showing up and performing so poorly, but he showed up, so take from that what you will. The aftermath is what is special.

CNN’s @DonLemon: “It is not a lie to say that [Ivermectin] is used as a horse de-wormer. I think that’s important. And it is not approved for Covid."@drsanjaygupta: “Correct … If you look at the data, there is no evidence that it really works [against Covid]." pic.twitter.com/eDpJUxrsqY

After a few hours of licking his wounds, Dr. Gupta went on Don Lemon’s program, Don Lemon Tonight, to get a confidence boost. Lemon was defensive about his beloved network. “He did say something about Ivermectin that I think wasn’t actually correct about CNN and lying. Ivermectin is a drug that is commonly used as a horse de-wormer. So, it is not a lie to say that the drug is used as a horse de-wormer. I think that’s important, and it’s not approved for COVID, correct?” Gupta responds, “That’s right. It is not approved for COVID, and you’re right, even the FDA put out a statement saying, basically, reminding people.” Then he spins off into oblivion, referencing the tweet above that the FDA put out like the good little propagandists they are.

After that shameful display on that shameful program that gets outdrawn by YouTube livestreams, any good faith someone would have extended Gupta should be revoked immediately.