“Crisis on Infinite Earths” has been lackluster for me so far. The posters for the second half did little to up my enthusiasm, with Stephen Amell looking rather uncomfortable with his hands outstretched. Perhaps I’m just used to seeing him with a bow, but something felt off. Nevertheless, I continued with the crossover in the hopes they would course correct.

Hour 4 of “Crisis on Infinite Earths” opens on Planet Maltus 10,000 years in the past, as we witness the origin of the Monitor. From there, we see our surviving heroes at the Vanishing Point as everyone is beginning to lose hope that they will be able to figure a way out. Meanwhile, Oliver – now the Spectre – has essentially been reliving his life as a vigilante, with a montage of clips from Arrow flashing on the screen as he prepares himself for his new cosmic duties with Jim Corrigan’s coaching.  Oliver goes to the Vanishing Point, appearing before his friends and telling them he’s become, well, something else. In a move that reminded me of Guru from Dragon Ball Z, Oliver unlocks Barry’s hidden potential, allowing him to transport everyone into the Speed Force, with a piece of Oliver’s soul anchoring them there, lest they fall into antimatter. While Supergirl, Lex Luthor, and Dr. Choi try to prevent the Anti-Monitor’s creation, the rest of the Paragons enter various pivotal moments from the Arrowverse, as well as a new one featuring a very special cameo from Ezra Miller as the Flash from the DCEU. The episode culminates with our heroes (and Lex) banding together to fight the Anti-Monitor’s forces as Oliver sacrifices himself to create a new world, one in which all of our heroes are on the same Earth.

Hour 5 opens on Kara waking up in her bedroom as Alex rouses her and says she and Kelly are going to the Nobel Prize ceremony. Before Kara can figure out what is going on, she gets a call from Nia telling her that the boss will be upset if she doesn’t cover it, only for Kara to discover that the person being honored is Lex, who, off of her shocked expression, gives the Girl of Steel a little knowing wink. As she tries to tell Alex what’s going on, Jonn, explains to her that only the Paragons remember the Multiverse, something that is played to great effect in a scene with Flash Supergirl and another very special cameo by comic book Crisis on Infinite Earths co-creator Marv Wolfman (who also co-wrote much of the crossover with Marc Guggenheim). Fortunately, the Martian has been transferring memories to various characters to bring them up to speed on what’s been happening. Meanwhile, Sara tries looking for Oliver, only to realize that he didn’t “come back” with everyone else. Diggle postulates that Oliver had to die so they could live, and laments the fact that Oliver died twice and he wasn’t there. Led by Sara and Barry, the rest of the hour is spent stopping Beebo – this is the Legends of Tomorrow hour, after all – and fighting the Anti-Monitor a second time, almost making part of Oliver’s sacrifice redundant. 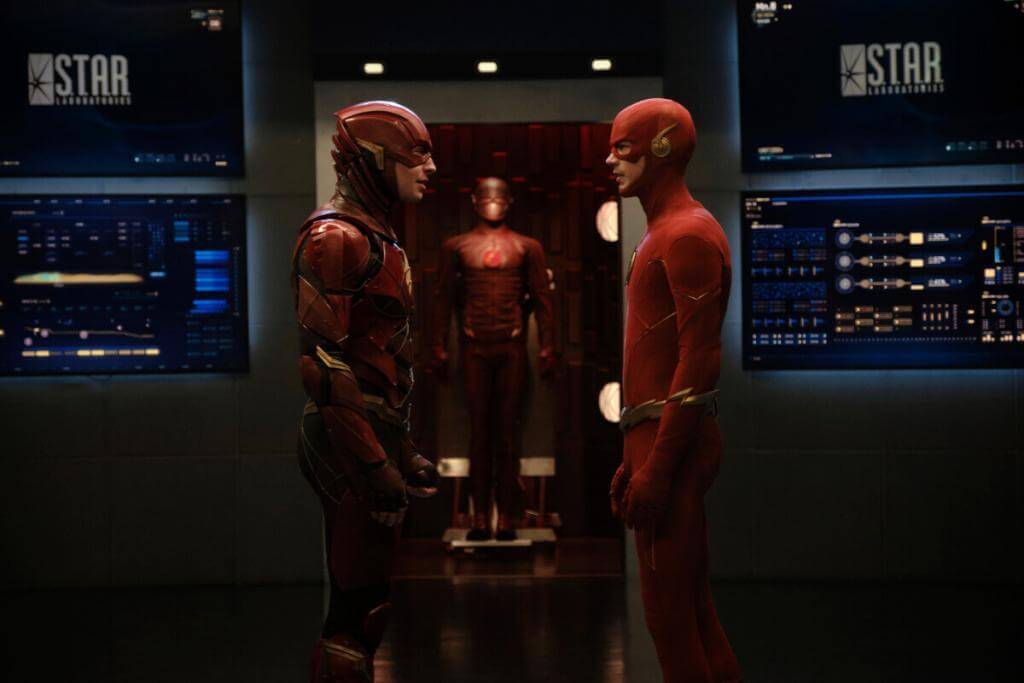 There was so much about hour 4 of “Crisis on Infinite Earths” that didn’t work. The most egregious to me was Oliver’s transition to the Spectre. It felt way too easy and has essentially turned him into a deus ex machina plot device the producers can use whenever Amell is free. While it was fun to see Barry move through various points in the Arrowverse and run into his DCEU counterpart, I feel like, at this point, the producers had written themselves into a corner and didn’t know how to get out of it, so they just let deep-voice Oliver do it. Sure, his death scene was far better than the first, and I’m glad it happened on his own show, but it felt almost as lazy as everybody just believing to ensure Oliver-as-the-Spectre succeeds.

That’s why I was so happy that hour 5 worked so well, particularly as a glimpse of what the CW universe is going to look like going forward. However, there were a couple of things that didn’t necessarily work for me like the reveal of Superman’s “boys” to set up one of my most anticipated shows of the fall season. But, overall, it worked extremely well.  I particularly like the fact that Lex is a “good guy,” as it harkens back to many DC animated properties, such as Young Justice. I would be remiss if I didn’t mention the end, as I was transported back to being six years old as the Super Friends theme played. Instantly, I remembered various moments from that show: Superman radioing for help as he was infected with kryptonite, seeing the origin stories of Green Lantern and Wonder Woman, and even Black Manta “setting the ocean on fire” at one point. Seeing the Hall of Justice and seats for all our heroes in live-action put a huge smile on my face and even almost made up for the lack of Smallville in one of the final montages (including the Reeves/Routh continuity of Earth 96 and Green Lantern), Oliver’s voiceover bookending this event. While I was thrilled that Guggenheim has confirmed that my favorite TV Clark and Lois are OK, I would’ve liked a shot of the Kent farm. Heck, I would’ve been happy with a quick shot from an old episode. The show was too important to DC’s legacy to find out about that in an interview. 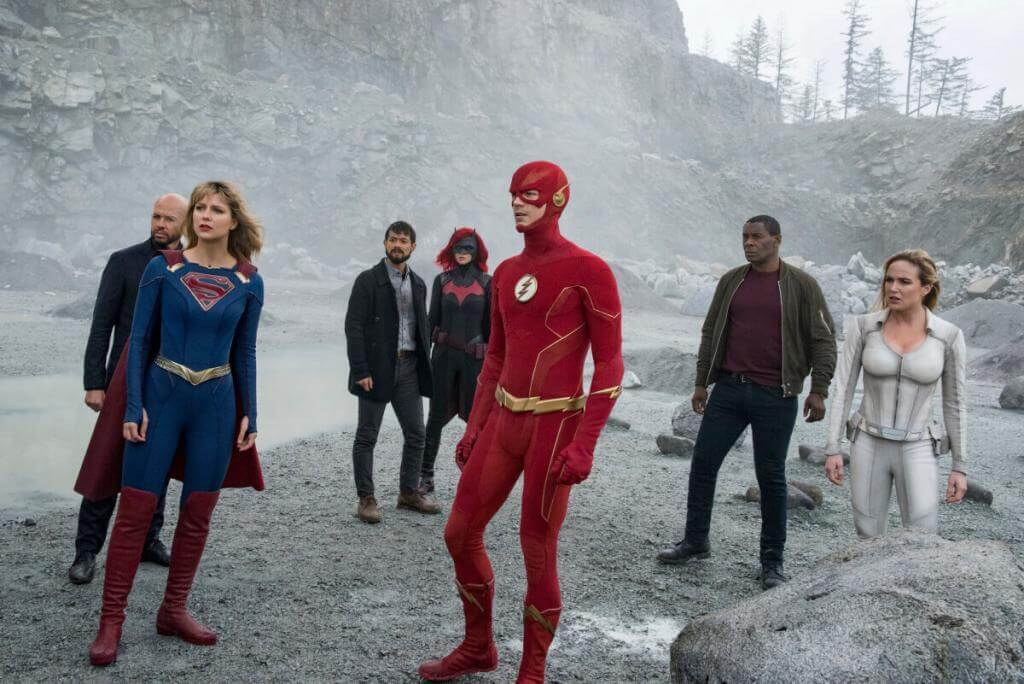 Despite this, a lot of what worked about “Crisis on Infinite Earths” came down to the performances. Yes, Stephen Amell came off a bit campy in the Arrow hour, which seemed at odds with the final hour, but he really gave a great performance towards the end. I’m really curious to see what the series finale of Arrow will look like in a couple of weeks. In addition, this was probably the best Grant Gustin and Caity Lotz have been in this entire crossover, at turns melancholic, hopeful, and, of course, heroic where necessary. I really liked their scenes together, and this actually makes me excited for what the future could hold for the Arrowverse at large.

Despite a very poor hour 4, hour 5 fulfills the promise of what “Crisis on Infinite Earths” should’ve been, thanks in part to great performances from Grant Gustin and Caity Lotz. Marc Guggenheim and co. made several creative missteps throughout this event, but for the first time in a while, I’m optimistic and, dare I say, hopeful for what the Arrowverse is going to become. After all, what is DC all about if not hope and optimism?

Despite a very poor hour 4, hour 5 fulfills the promise of what "Crisis on Infinite Earths" should’ve been, thanks in part to great performances from Grant Gustin and Caity Lotz. Marc Guggenheim and co. made several creative missteps throughout this event, but for the first time in a while, I'm optimistic and, dare I say, hopeful for what the Arrowverse is going to become. After all, what is DC all about if not hope and optimism? 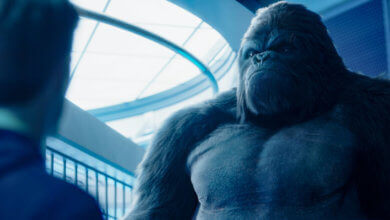 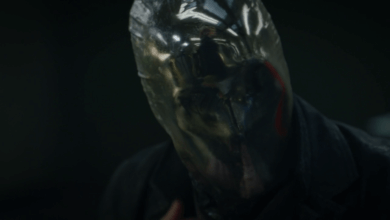 REVIEW: The Walking Dead – Season 8 Episode 8 “How it’s Gotta Be” 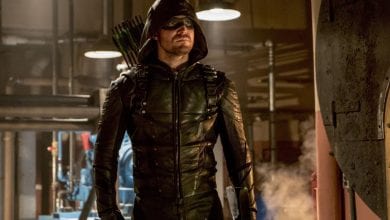