Disney Made a Big Mistake With The Owl House

"Us weirdos have to stick together, you know?" 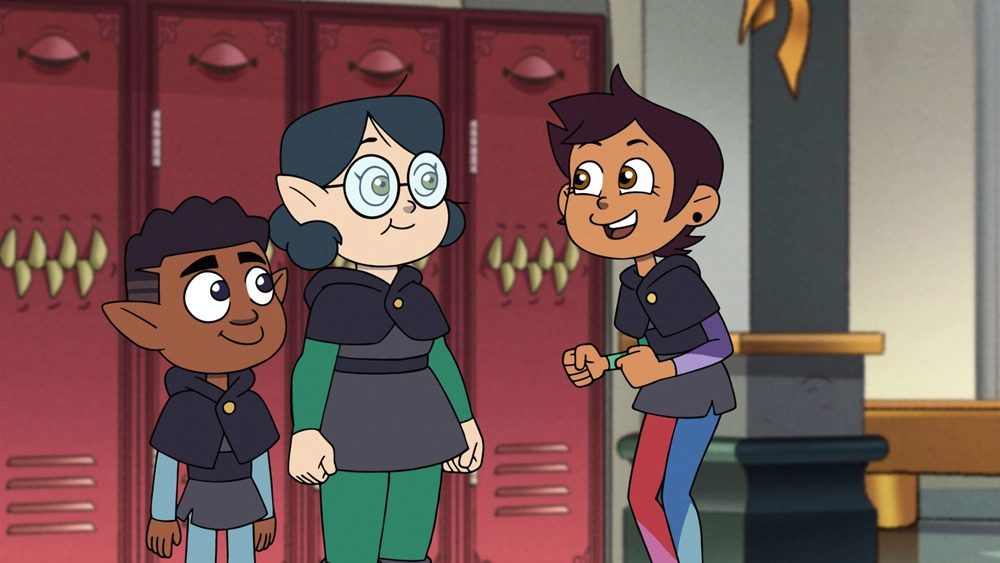 Last year, I went on a spree watching shows I had been interested in but never had time to watch. Among these shows were some of Disney’s more acclaimed modern animated series, Amphibia and The Owl House. I had ample time to discuss what I loved about Amphibia in reviewing its third season, but I want to take a different approach with The Owl House. Both of these shows seem inspired by Gravity Falls. I mean this merely in that they’re adventure shows with mystery and supernatural elements. The characters and stories are different, and I consider the similarities to one of my favorite shows harmless. In fact, the creators of both shows worked on Gravity Falls, which likely explains some of the overlap. Amphibia had a full three seasons to tell its story. I want to talk about The Owl House because of Disney’s egregious mismanagement of one of their best current series. They renewed The Owl House, but not for a full season because the show doesn’t “fit the Disney brand.” Now, Dana Terrace and her creative team are left with three 40-minute specials to wrap up a complex story with multiple character arcs and a multi-dimensional threat. Episodes near the end of season 2 contain several gags about how the characters don’t have time for 20 more episodes before confronting the show’s big bad. How Dana Terrace and her crew got that past Disney is beyond me, but I applaud them. I’d like to break down The Owl House’s strengths to show, in turn, why this was a bad move.

The Owl House features one of the most unique, diverse casts I’ve seen in a TV show. I mean variety of character more than diversity of physical characteristics, although that’s true too. The story is set into motion when protagonist Luz’s (Sarah-Nicole Robles) mom Camilla (Elizabeth Grullon) tries to send her to camp. Luz struggles in school and social situations because she gets hyper-focused on her favorite fantasy stories. Camilla believes sending her to a regular, boring summer camp will straighten Luz out and help her in the long run. However, Luz has some very different summer plans once she discovers a portal to another world, the Demon Realm. There she meets Eda the Owl Lady (Wendie Malick), a powerful if unconventional witch, her pet demon King (Alex Hirsch), and their house demon Hooty (also Alex Hirsch). Luz decides to stay with Eda, doing chores in exchange for magic lessons. She attends a school for witches, makes plenty of friends and enemies, and grows closer to Eda, learning ever more about her and the strange denizens of her home. Season 1 culminates with a confrontation against Emperor Belos (Matthew Rhys), the show’s primary antagonist, who is simultaneously more and less than what he appears. We also get to meet characters like Luz’s classmates Willow and Gus, as well as Eda’s sister Lillith. The voice acting is consistently stellar, with the show’s standout being Wendie Malick as Eda. Malick is no stranger to voicework and always brings the right emotion and energy. 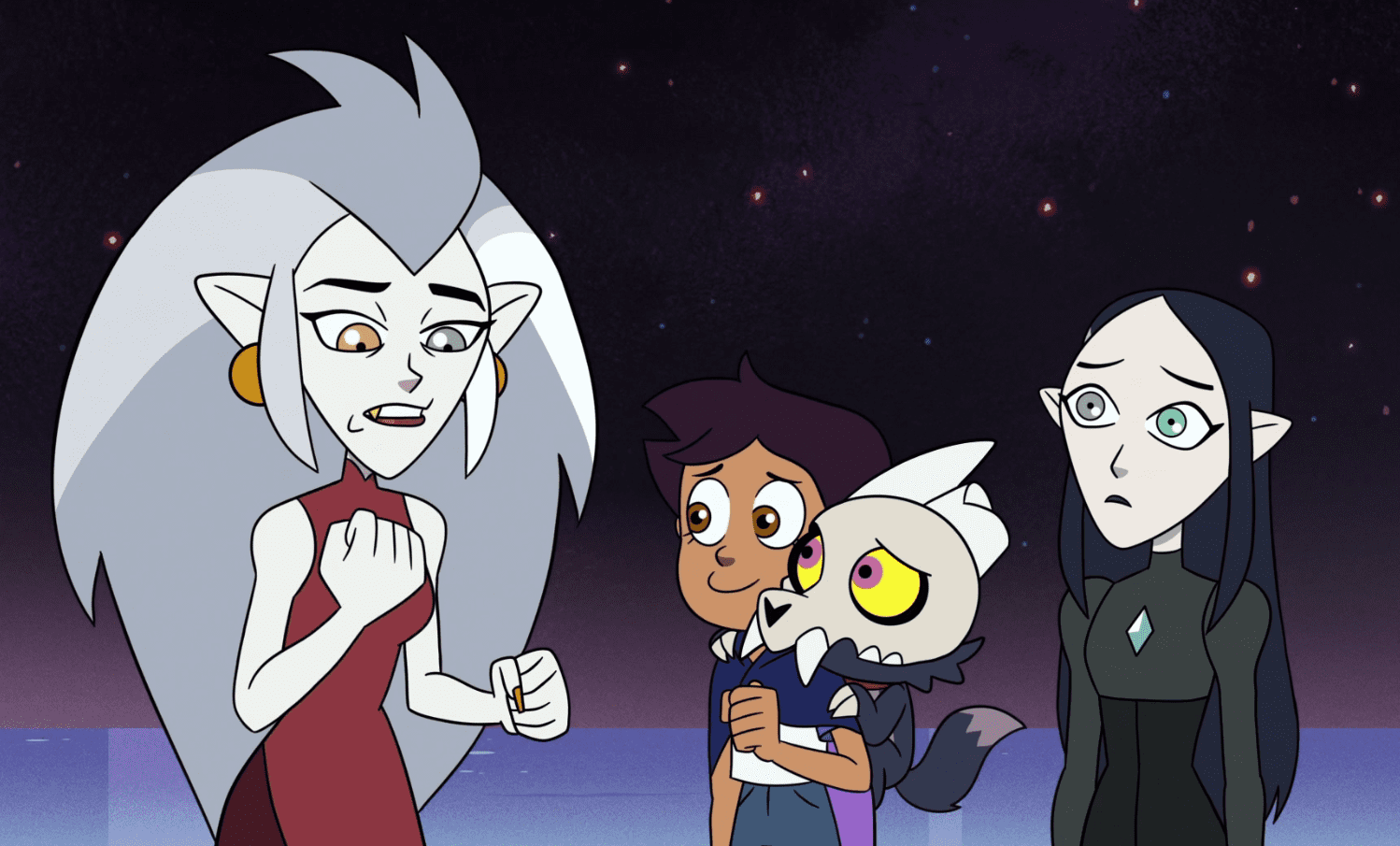 I thought season 1 was just okay, and not nearly as funny, wholesome, and engaging as Amphibia. Anne and the Plantars had a stronger familial bond than Luz and the Owl House family, and the world of Amphibia sucked me in more than the Demon Realm. I liked Amity (Mae Whitman), who goes from a bully to Luz’s potential love interest. Still, I didn’t think she was as interesting as I had been led to believe, and her relationship with Luz was rushed. This all changed in season 2, though. The season 1 finale raises the show’s stakes significantly, and this carries over into season 2, and then some. Knowing these characters are in peril gives their interactions more weight, and I also think the writing got better overall. I’ve already started re-watching season 1, and I appreciate it so much more in retrospect seeing the groundwork for season 2 and knowing what this show becomes. 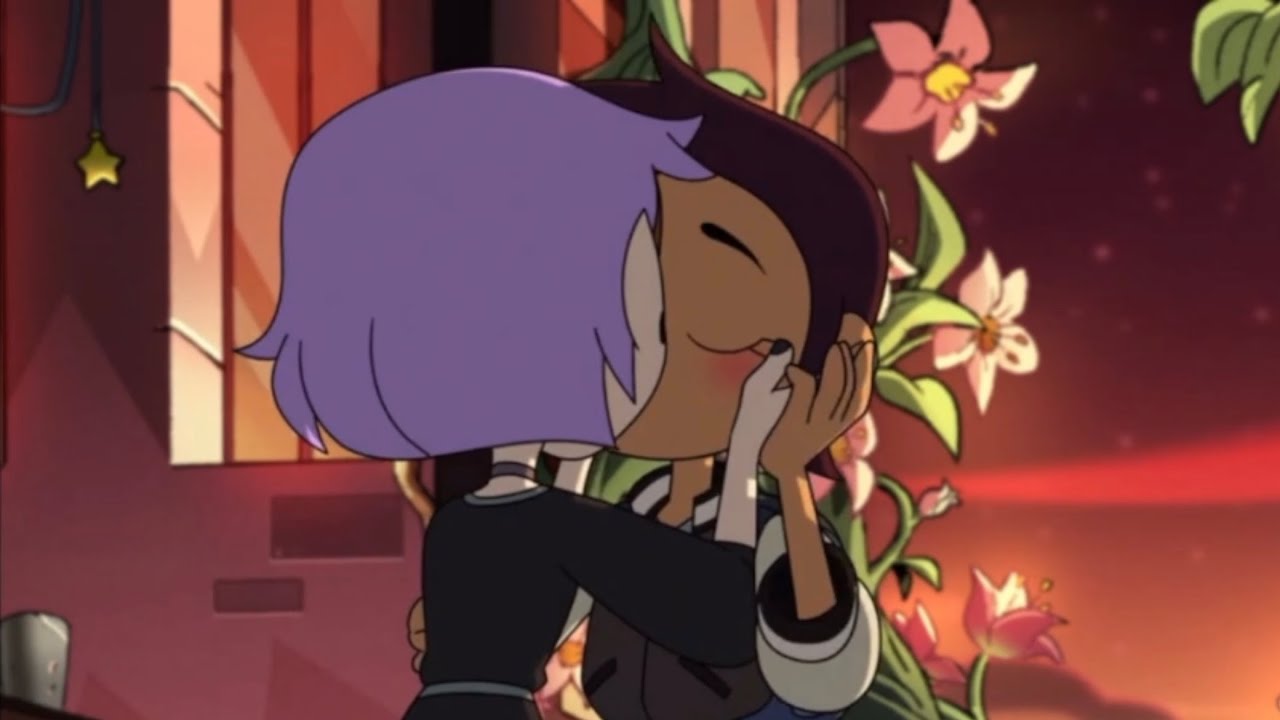 The Owl House takes cues from Alex Hirsch’s Gravity Falls regarding its opening theme, mystery story elements, and zany character relationships. But it does much to establish its own character with its bright, imaginative animation style. A demon in The Owl House could look like anything, and so could a witch. You have relatively humanoid characters like Eda and Amity, but then there’s Boscha, a young witch with pink skin and three eyes. That’s not the extent of the oddities on display, either. King is cute and cuddly, but his face is a skull! Tinella Nosa, AKA Tiny Nose, is basically a face with legs. The architectural design within the Demon Realm is unfamiliar, and at first, it frightens Luz. The witch and wizard stories she’s into are more lighthearted and less morbid. The Boiling Isles, where Eda lives, is constructed from the bones of a dead titan. This is important later, but you want to find out how/why for yourself. Beyond the inherent design, the animation work improves dramatically in season 2. Season 1 looked good, but scenes like Luz and Amity’s first real kiss are straight-up magical – the flowers in the background, their facial expressions, everything. This is one frame from a Disney show that I would call theater-worthy. 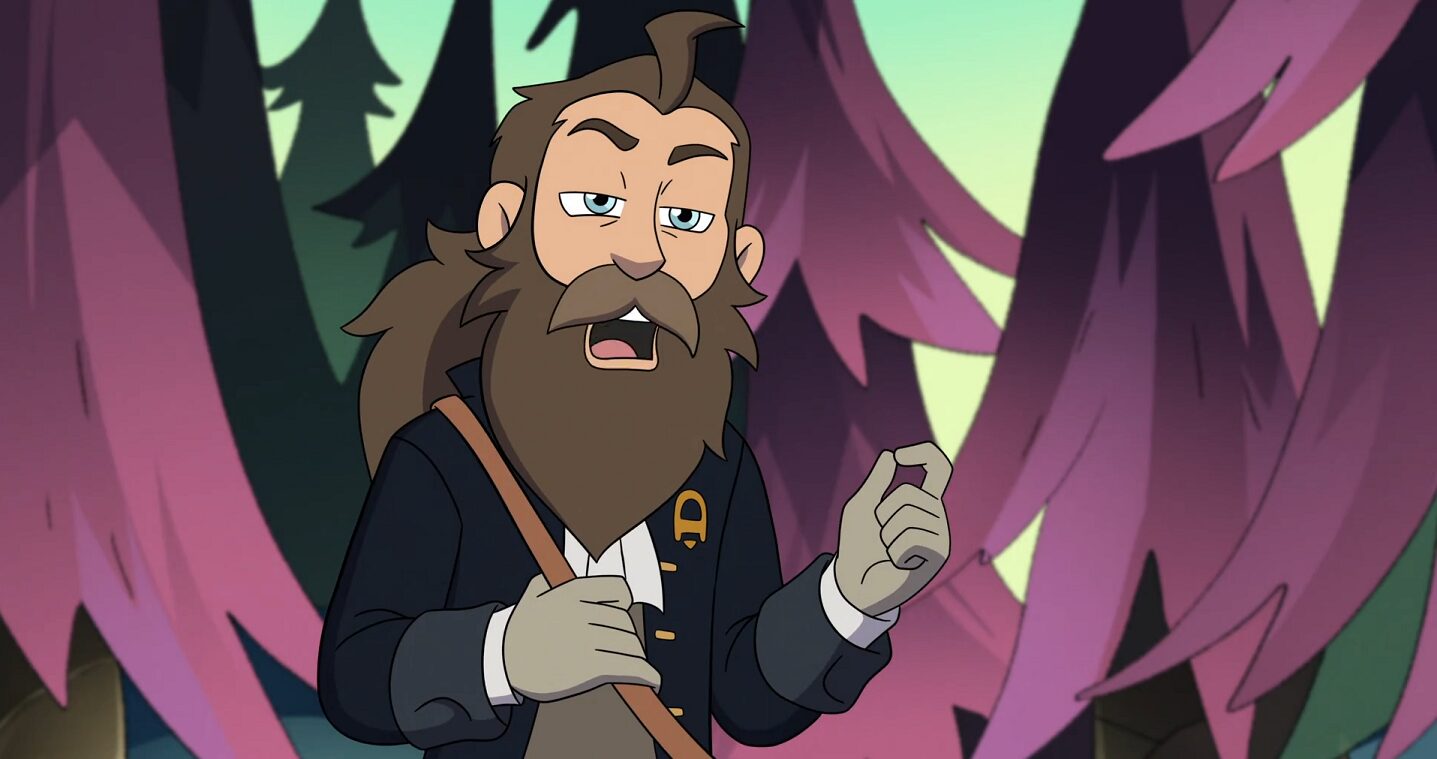 Personally, I don’t care how well a show does or what critical praise it garners. Knowing that some entity gave a show their stamp of approval neither encourages nor dissuades me from watching or enjoying it. However, bear with me a moment here, and let’s speak Disney’s language. They cut this show short because one of the TV execs determined it didn’t fit the Disney brand. I’m not sure how much consistency you can maintain for your brand image when you spread it across Disney, Pixar, National Geographic, Lucasfilm, etc., but I digress. If it’s because the show depicts witches and demons, I have bad news for Disney: they’ve shown all of this before in their feature films, and they knew this would be the case. Luz travels to the Boiling Isles in season 1, episode 1, “A Lying Witch and a Warden.” A child literally gets impaled in Amphibia! I am left to wonder if the real reason for getting rid of the show ASAP is the relationship between Luz and Amity, two girls. Disney is more than happy to market this pairing to their advantage to bait the LGBT community’s support during pride month, but actions speak louder than words. A show starring a female couple is harder to edit than a movie with a blink-and-you’ll-miss-it kiss or dance between same-sex characters. This is quite baffling given the incredible reviews the show gets online: 93% audience rating on Rotten Tomatoes and 8.2 on IMDb, and ⅘ from Commonsense Media. The Tomatometer on RT, which counts critic reviews, has the show sitting at 100%. The show has been nominated for Emmy Awards, Annie Awards, and GLAAD Awards. I don’t know what its Nielsen ratings are, but it seems to be doing awfully well. I know several people who prefer The Owl House to Amphibia. While I still disagree, I don’t understand cutting this show short. 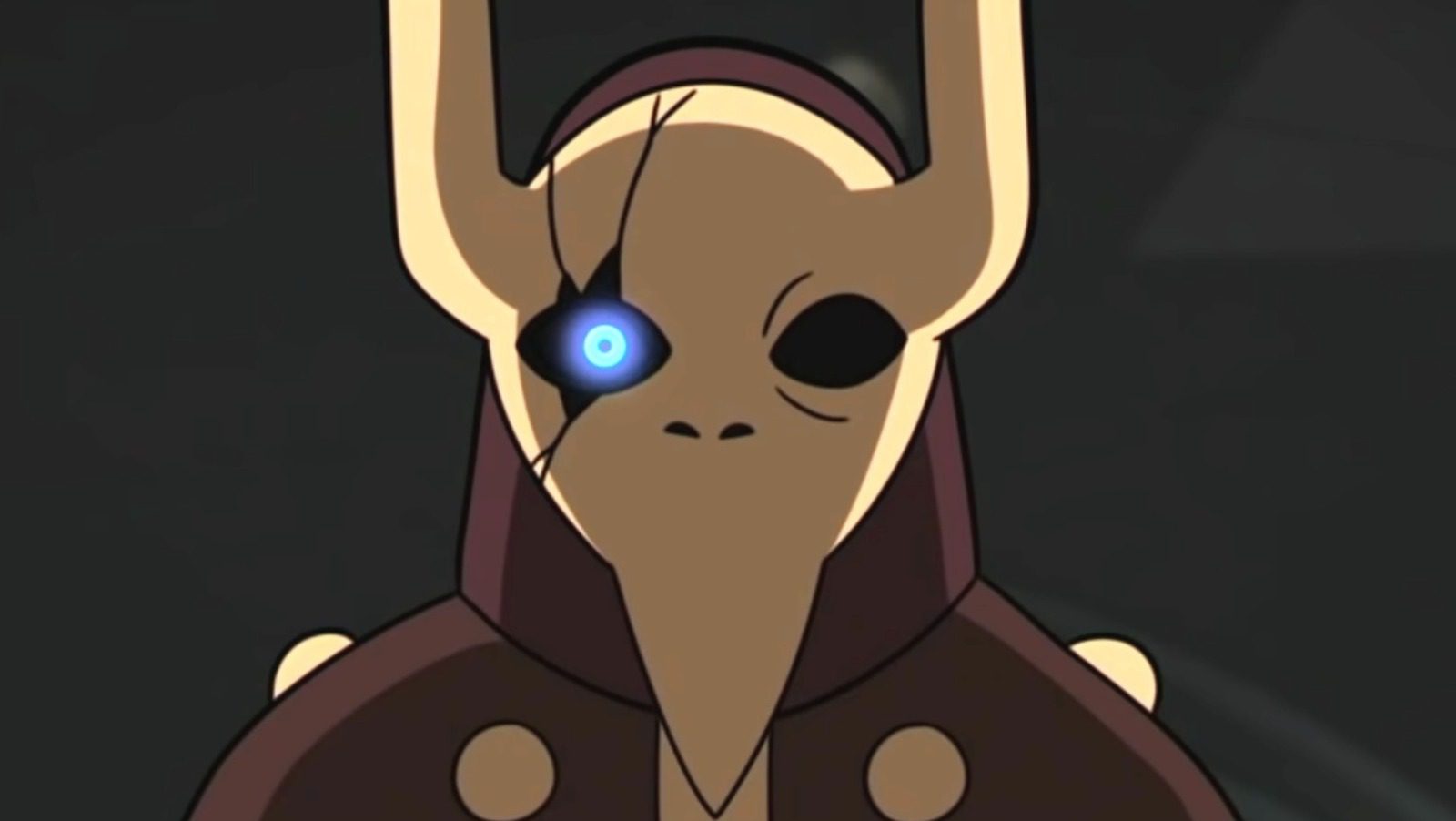 I put a spoiler warning at the beginning just in case, but I’ve tried to spoil the main story as little as possible. I want people to experience the magic and surprisingly creepy horror for themselves. The Owl House isn’t a perfect show, but it’s well-written, slowly unraveling mysteries about Eda, Emperor Belos, and the Demon Realm itself. Luz is a funny, sympathetic protagonist with an extraordinary group of friends and enemies. The animation and music continually improve like some of the best animated series out there. I recommend checking out The Owl House if you haven’t, and I hope Disney one day comes to recognize this as the colossal mistake it truly is.