The official Dragon Prince Twitter has provided a glimpse at the progress being made on season 4 of the series. In the Tweet’s attached photo, they reveal that they’re essentially still planning season 4’s story at the moment. They also mention that they’ve been hard at work on season 4 ever since Netflix greenlit “the full saga,” AKA the final four seasons of the show. They graciously thank fans for their patience and ongoing interest in the series, as well as taking the opportunity to push tie-in products like the series’ novels and a board game. Finally, the message expresses hope for a Dragon Prince panel at a major convention soon. 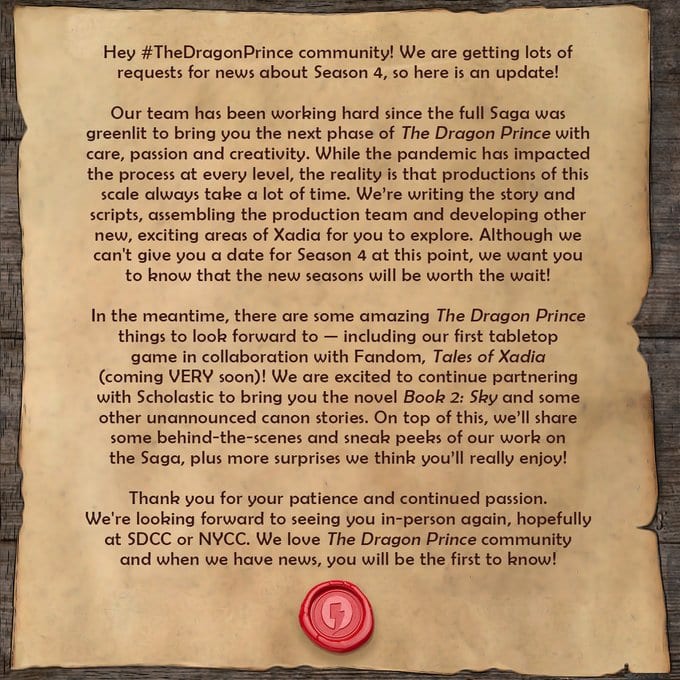 Overall, none of this is too surprising. We could hardly expect Wonderstorm to have a season of TV ready to go less than a year after it was greenlit, let alone a gorgeously animated fantasy epic like this. The Dragon Prince has historically had a pretty short turnaround time, but we’ve also never had several seasons announced together like this before. Season 1 was a surprise (unsurprising; it does air on Netflix, after all), and seasons 2 and 3 were announced shortly before they were released. Wonderstorm is playing the long game with the next four seasons, which will account for over half of the show’s episodes. Accounting both for the extra planning involved and the coronavirus pandemic, I think we can give them the benefit of the doubt. I absolutely adore this show, and it has continually gotten better since season 1 premiered. In future seasons, I mainly hope Rayla and Callum’s relationship will become more interesting; right now, it just seems like it was convenient to pair them up. Claudia either needs to become the main villain or become redeemed somehow. Viren should have died at the end of Book 3: Sun, and Claudia should have taken his place in grief, anger, and revenge. However, as this didn’t happen, something needs to be done there. I look forward to wherever the series takes us next.