Home  /  Entertainment  /  Movies  /  Fantastic Beasts and What You Need to Know

Fantastic Beasts and What You Need to Know 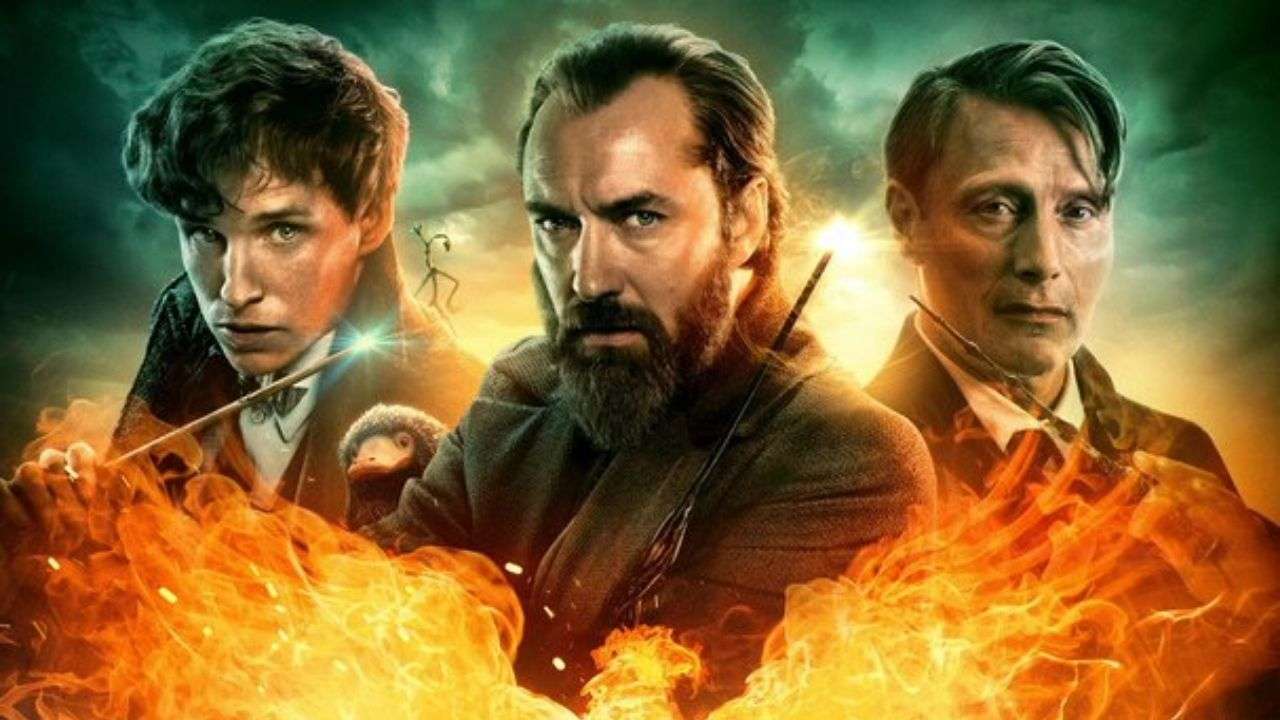 Fantastic Beasts: The Secrets of Dumbledore is just around the corner, and after a four-year hiatus between films, many viewers have forgotten the plot of the series. The latest Wizarding World movie is set to take place in the 1930s, a few years after the events in the second film, Fantastic Beasts: The Crimes of Grindelwald. Watch the three official trailers below.

The following image is a group shot of all the characters from the second film. A majority of them will be in the third. 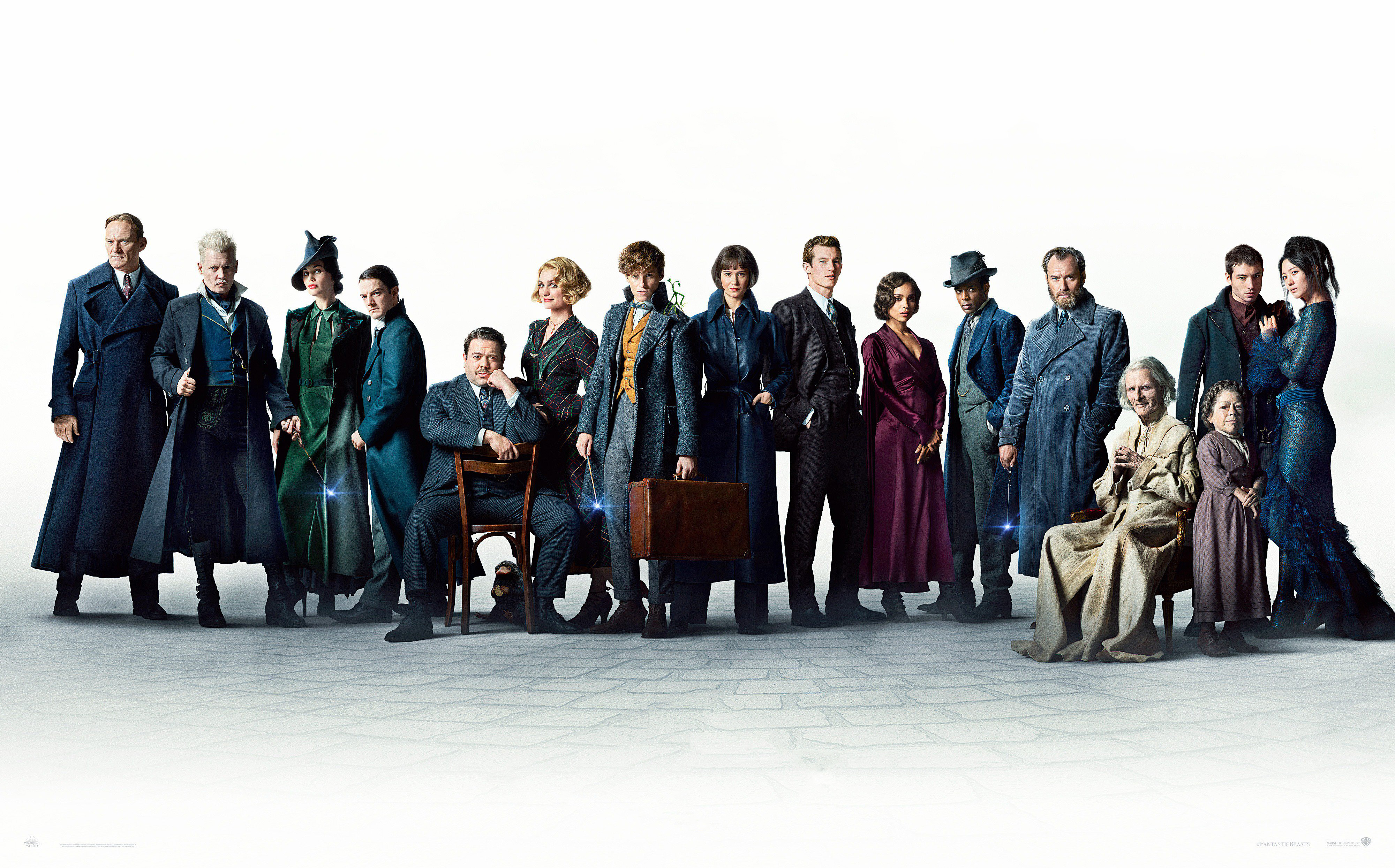 Beneath are important places, terminologies, and characters that you should know before watching the latest Fantastic Beasts film!

Hogwarts School of Witchcraft and Wizardry: British school for witches and wizards, located in Scotland.

The Room of Requirement: A secret magical room hidden within Hogwarts; it shows up when a person is in desperate need of it. One could either hide themselves or an item. Located on the 7th floor, it transforms into whatever the person needs it to be at that exact moment. Also known as the “come and go room” and “the place where everything is hidden.” We know this room from the Harry Potter series, where members of Dumbledore’s Army meet and hide from death eaters, as well as where Harry, Ron, Hermione, Draco, Crabbe, and Goyle fight against fiendfyre to destroy Rowena Ravenclaw’s diadem (a Horcrux).

MACUSA: Magical Congress of the USA. Governed the wizarding world in the USA. Located in New York City.

Muggle: A non-magical human. Also called a No-maj in the USA and non-magiques in France. Jacob Kowalski is a muggle.

Pure-Blood: an individual who comes from a 100% wizard family line, no marriages with muggles (non-magical people), or at least claimed that there were no muggles or muggle-borns (witches and wizards from non-magical parents).

Sacred twenty-eight: twenty-eight British families that were of pure blood in the early 1900s. The Lestrange family is one of the twenty-eight families. Click here to view the entire list.

Maledictus: a female individual with a blood curse that would turn her into a beast. The female, over time, loses the ability to think like a human and permanently becomes a beast, such as a snake. Nagini is a Maledictus.

Mirror of Erised: a magical mirror that shows the person looking into it what their deepest desire is. For Harry Potter, it was to have a loving family, to have his parents. He was also able to get the sorcerer’s stone from the mirror, as he had no intention of using it but wanted to protect it from Voldemort and prevent him from returning. For Ron Weasley, who was the youngest Weasley son, it was to be Quidditch Captain and Head Boy. Albus Dumbledore sees himself and Gellert Grindelwald in the mirror.

Blood Pact: a magically binding contract between two people who shared their blood. A young Albus Dumbledore and Gellert Grindelwald made this agreement not to fight each other, and thus neither could kill the other. At the end of the second film, Albus has the blood pact and intends to find a way to destroy it.

Obscurial: The result of a young witch or wizard suppressing their magical powers instead of learning to control them. They develop a dark parasitical force (obscurus). When these children reach their mental/emotional breaking point, they release their obscurus, which can resemble an invisible wind that causes mayhem and destruction. Since 2016, there has been a rumor that Ariana Dumbledore was an obscurus.

Deathly Hallows: three powerful objects that, when united, make the wielder the most powerful witch or wizard.

Bogart: shape-shifting creature that assumes the form of whatever frightens the person who encounters it. Example: Spiders for Ron Weasley, Dementors for Harry Potter, an office job for Newt Scamander, and Leta Lestrange’s is her brother drowning. Click here for more information published by J.K. Rowling.

Magizoologist: witch or wizard who studies magical creatures, similar to a “zoologist.” Newt Scamander is a magizoologist.

Legilimency: “the practice of using magic to enter another person’s mind.” This includes mind-reading, interpreting others’ thoughts, and turning a person’s mind against them. Some witches and wizards are born with this ability, while others learn it. Queenie Goldstein was born with it. Click here to read more about Legilimency.

Gellert Grindelwald: a dark wizard. A young Gellert befriended a young Albus Dumbledore in Godric’s Hollow, where they plotted to discover the Deathly Hallows and end the secrecy of witches and wizards. They created a blood pact. At the age of 17, he was involved in a duel with Albus and Aberforth that resulted in the death of Arianna Dumbledore. He and Albus split ways afterwards, and Gellert gained followers for his cause, “the greater good.” He believed that wizards and witches deserved to live without fear and rule the muggles. He had no interest in anyone whom he considered beneath him. Manipulative and persuasive, he had his alliance “spread the word” across the wizarding world. Grindelwald was killed by Lord Voldemort in 1998. Johnny Depp previously played Gellert Grindelwald, but Mads Mikkelsen will now be portraying the character. 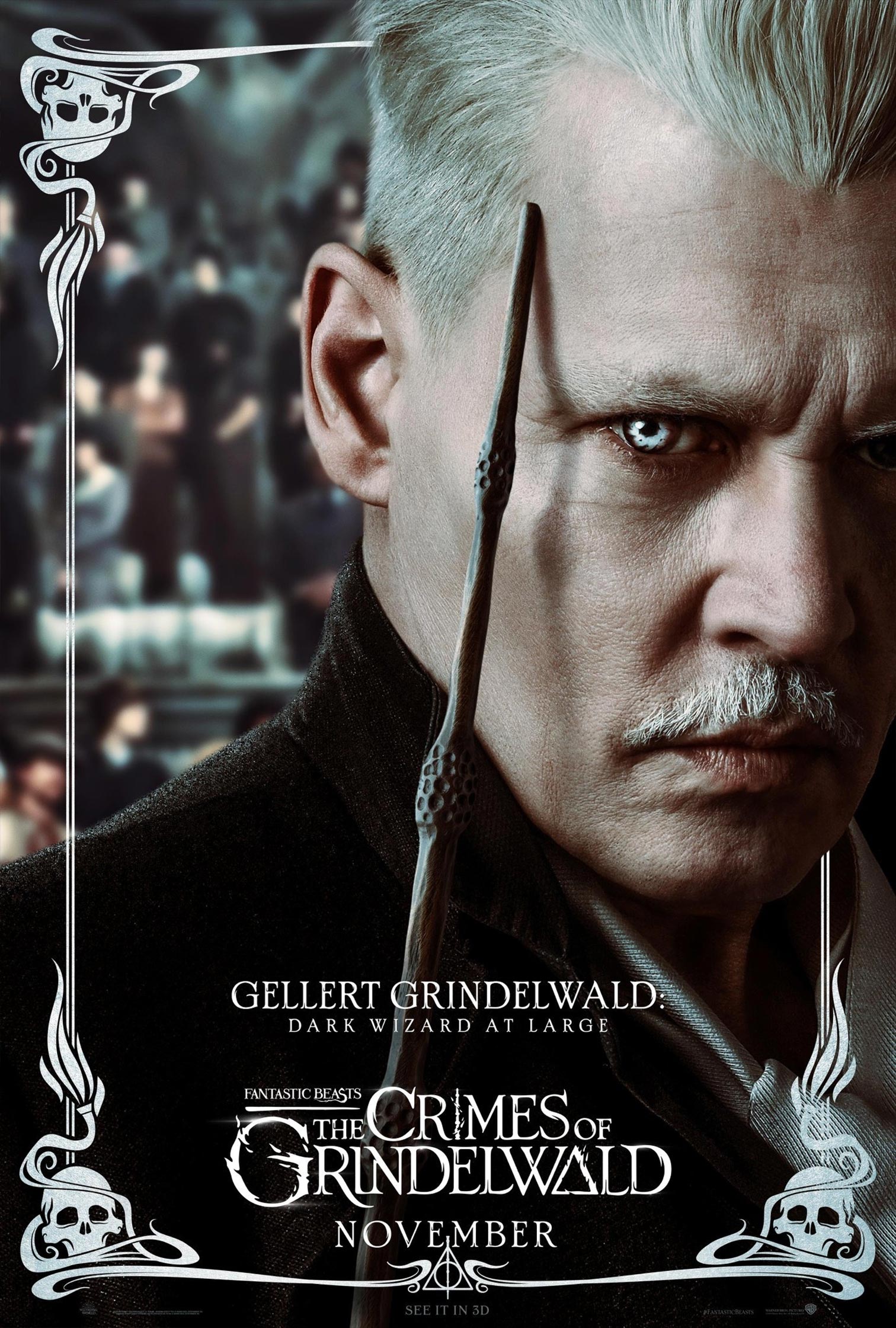 The Dumbledore Family: A British wizarding family that moved to Godric’s Hollow (the same place where Harry Potter’s family lived and were murdered). The children are half-bloods. Appears on a chocolate frog card: “Considered by many the greatest wizard of modern times, Dumbledore is particularly famous for his defeat of the dark wizard Grindelwald in 1945, for the discovery of the twelve uses of dragon’s blood, and his work on alchemy with his partner, Nicolas Flamel. Professor Dumbledore enjoys chamber music and tenpin bowling.” Credence Barebone: Born around 1901, baby Credence and his aunt were traveling by ship (from England) to America, as were Leta Lestrange, Corvus Lestrange (Leta’s half-brother), and Irma Dugard. Corvus, also a baby at the time, was crying and irritating a young Leta and was subsequently switched with Credence in their cribs. No one knew of the switch besides Leta. The ship was sinking during a major storm, and all passengers were abandoning ship via lifeboats. Credence was taken by Leta and Irma Dugard in one lifeboat, whilst Credence’s aunt and baby Corvus were in another. The second lifeboat capsized, drowning both the aunt and Corvus. Credence arrived safely in America and was subsequently put up for adoption in Corvus’s place. Credence lost control of the Obscurus within him and killed several people. The MACUSA Aurors chased him down and seemingly killed him; however, he escaped in his Obscurus state, unbeknownst to anyone except Newt Scamander. Credence joined the Wizarding World circus in Europe and met Nagini. He and Nagini escaped from the circus and searched for his true parentage. He reunited briefly with Irma Dugard before she was murdered to keep Credence’s true parentage a secret. Credence met Leta Lestrange, and she confessed the truth to him.

Traveled to New York to free his Thunderbird in the state of Arizona. Tried to help Credence control his Obscurus whilst in New York. Befriended Jacob Kowalski. Newt is socially and physically awkward and prefers magical creatures to human companionship. Was adamant about staying neutral during the events of the second film (Crimes of Grindelwald), but after the supposed death of Leta Lestrange and Queenie joining Grindelwald, Newt joined Albus Dumbledore to fight Grindelwald and his supporters. Newt even hugged Theseus as his brother mourned his fiancee. War hero during WWI; noted to have served with distinction and was internationally recognized. Theseus tried to convince Newt to join him at the Ministry and to join Albus Dumbledore, but Newt wanted to stay neutral. Theseus was heartbroken and crying after the death of Leta during a Grindelwald rally in Paris and was momentarily surprised when Newt hugged him and told him, “I’ve chosen my side.” Jacob Kowalski: Muggle/No-maj from New York. Befriended Newt, Tina, and Queenie in the first film Fantastic Beasts and Where to Find Them. Owner of a successful pastry shop in New York City. In a romantic relationship with Queenie and wants to marry her. Sided with Newt and Dumbledore, whilst Queenie joined Grindelwald. Leta Lestrange: Slytherin at Hogwarts and friend of Newt Scamander. Fiance to Theseus Scamander. Former love interest of Newt when they were in Hogwarts. Supposedly died protecting the Scamander brothers against Grindelwald. Her last words were directed towards either (or both) Newt or Theseus, saying, “I love you.” 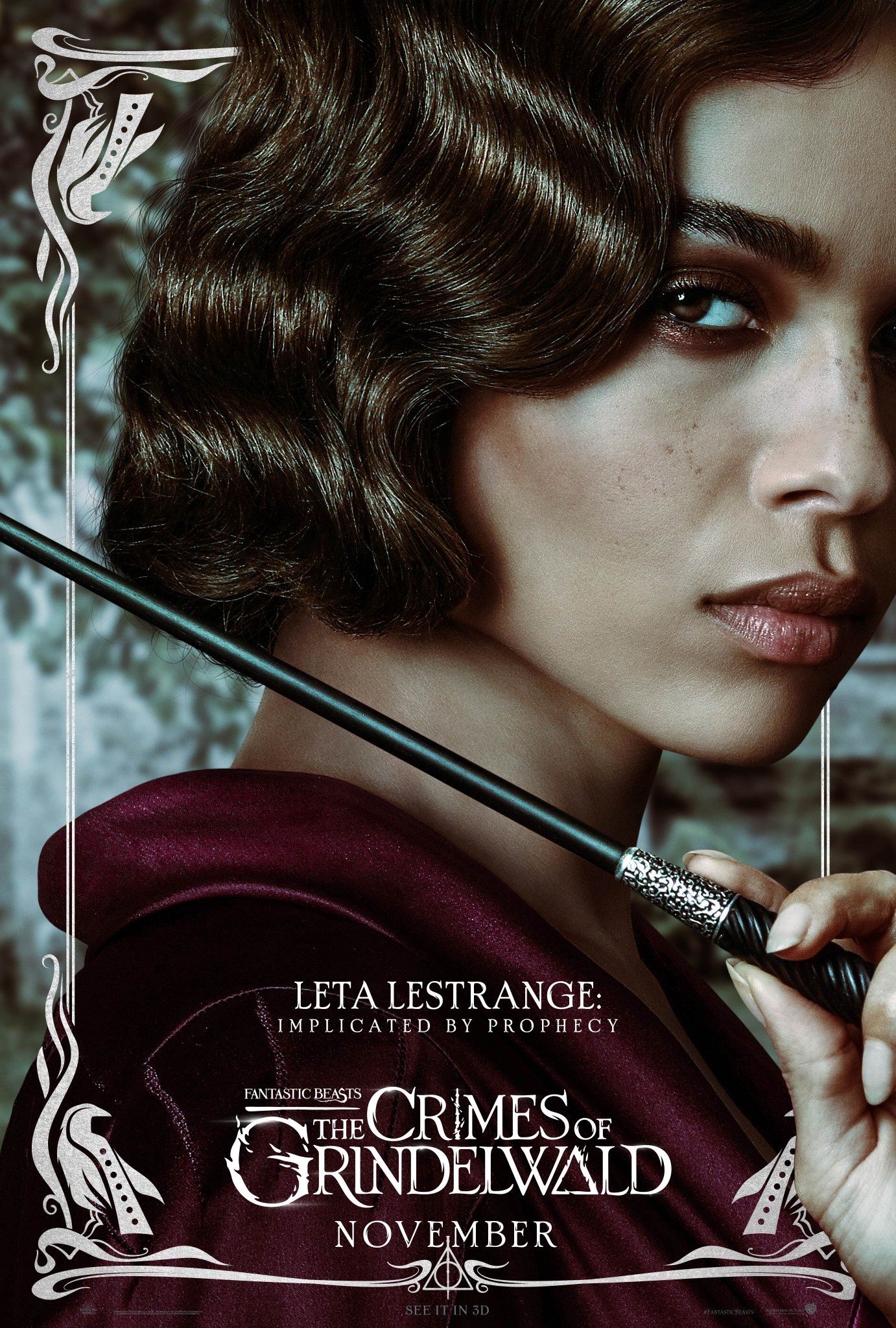 Corvus Lestrange: Pure-Blood son of Corvus Lestrange (senior) and Clarisse Tremblay. He died on a sinking ship that was traveling on the Atlantic. Half-brother to Leta Lestrange. Leta accidentally swapped baby Credence with baby Corvus.

Bunty Broadacre: Newt Scamander’s assistant, she takes care of the magical creatures inside the suitcase when Newt is away. Has a crush on Newt. Vinda Rosier: French witch, Pure-Blood status. Loyal and trusted Grindelwald follower, very similar to Bellatrix Lestrange with Voldemort. In the Harry Potter franchise, there is a death eater with the last name of Rosier. We can conclude that the family line was always heavily involved in the dark arts. Yusuf Kama: French Pure-Blood wizard, son of Laurena and Mustafa Kama. Half-brother to Leta Lestrange. Made an unbreakable vow to kill Corvus Lestrange. Watch the video below to find out more about Leta, Yusuf, and Corvus. Irma Dugard: French, half-elf, housekeeper for the Lestrange Family. She took care of Credence Barebone, even signing his adoption papers. Died due to an attack by Grindelwald’s followers.

Nagini: A Maledictus; befriends Credence in the second film, where they both worked at the Circus Arcanus in France in 1927. Nagini in the Harry Potter series is now permanently a snake and acts like a monstrous snake. She belonged to Lord Voldemort, who made her a Horcrux. She is beheaded at the Battle of Hogwarts by Neville Longbottom.

Torquil Travers: Head of the Magical Law Enforcement for the Ministry of Magic. Fantastic Beasts: The Secrets of Dumbledore premieres on April fifteenth in theaters across the USA and will be available for streaming on HBO Max forty-five days later. 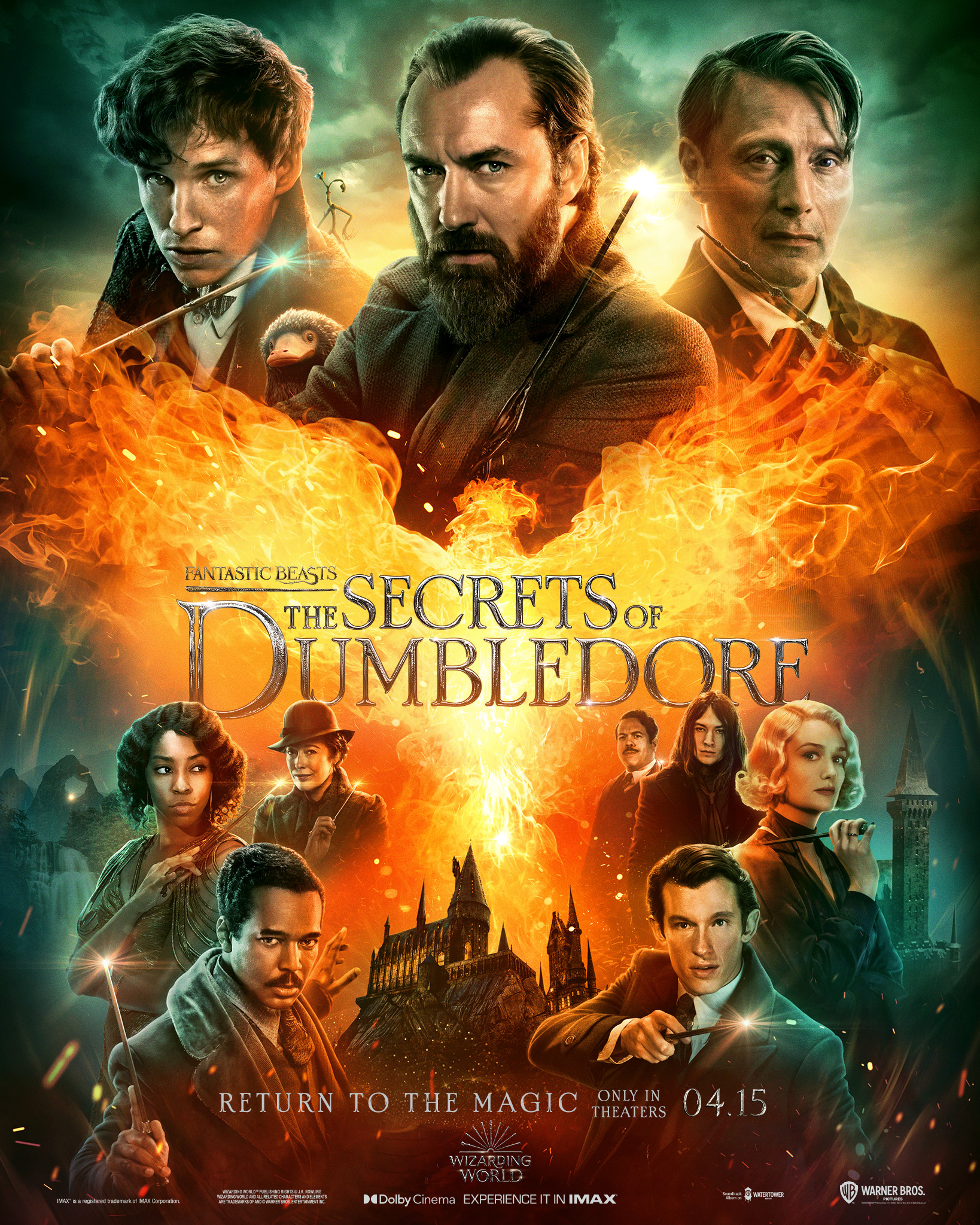