Final Raya and the Last Dragon Trailer Makes a Splash 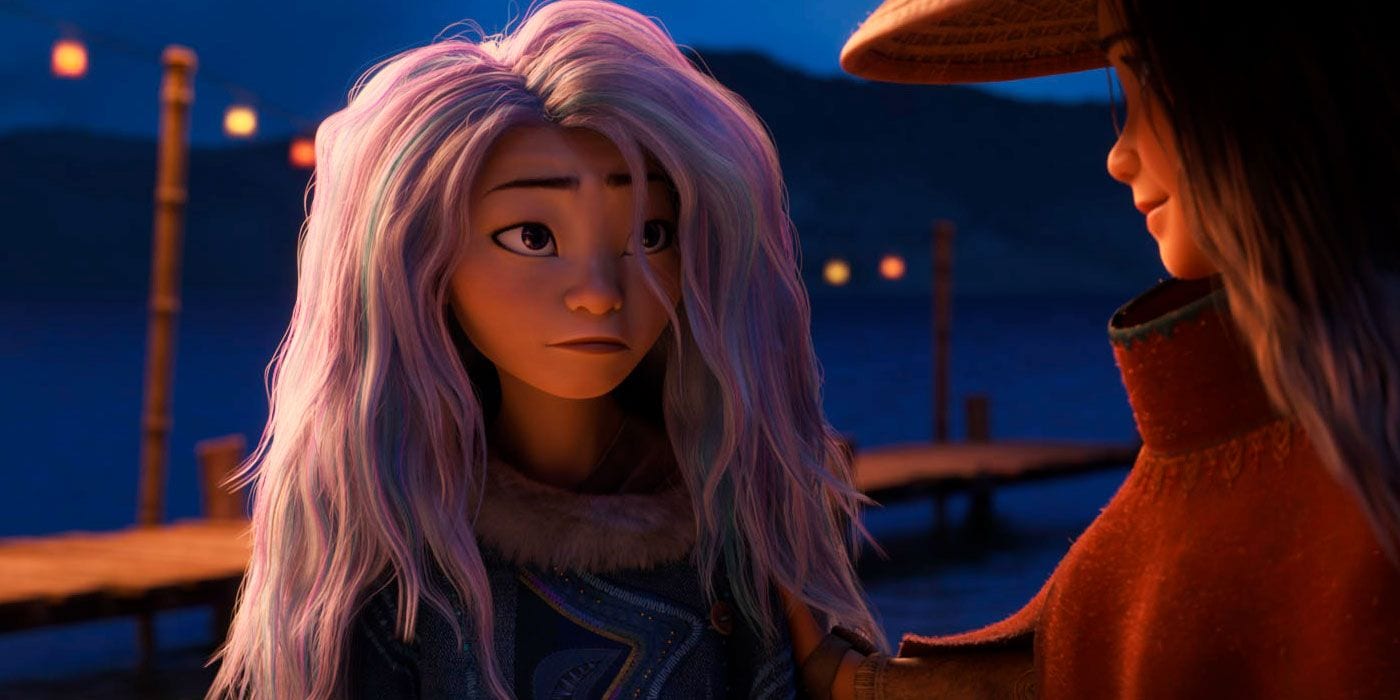 Tuesday, January 27th, Disney released the final trailer for Raya and the Last Dragon. The film, which stars Kelly Marie Tran and Awkwafina, is set to come out in theaters and on Disney+ for a premium fee on March 5th. This trailer is, unsurprisingly, more revealing than the first, and introduces more of the film’s cast. You can check it out here:

I’m extremely excited for this movie. I love the setting; this idea of a Southeast Asian fantasy land is different from anything else Disney has done. It still reminds me of Avatar and, subsequently, Korra, but I’m willing to roll with it. I also really like the character designs, particularly Sisu and Raya. Raya looks almost like a hybrid of Moana’s eyes and Pocahontas’s longer, angular face, which is just gorgeous. Speaking of gorgeous, wow, this city our characters are in is just stunning. The colors and the lighting are blowing my mind. It looks unlike anything I’ve seen in an animated film. So far, I like what we’ve seen of Sisu’s shapeshifting abilities and comedy style. While they didn’t name most of the other characters, it’s cool to see them. I like that there will be a group of characters searching for Sisu, rather than Raya alone. That would have been a little too similar to Moana looking for Maui, and I just love a good team dynamic. I’m also really liking what little they show of Raya’s father, who is voiced by Daniel Dae Kim. He also voiced General Fong on Avatar: The Last Airbender and Asami’s father Hiroshi in Legend of Korra.

I really like the look of the action so far, and I can’t help being a little hyped for the scene where Raya fights the female warrior. Hopefully, there’s some exciting context there, and it’s not just a one-off. Heck, I’m even excited for the different tribes they show. I love it when there are smaller splinter factions within a given nation or group in a movie. That’s how it is in real life, and it makes things so much more interesting. Pretty much my only problem with this trailer is the trashy pop song at the end. However, they do that every time, so it must be working. I really can’t wait for this movie, and I want it even more after all the waiting from delays. Personally, I’ll be seeing it in the theater rather than paying a premium just to watch it on my TV.

Will you search for the Last Dragon on March 5th? Do you plan to see it in theaters, on Disney+, or just wait until it’s free? Let us know in the comments!

This is one of most anticipated movies of the year for me, Virginia. I’m excited for the characters, setting, story, etc. I love the baby in the opening and I can’t wait to see more of Benedict Wong’s character, Tong and Gemma Chan’s character, Nammari whom Raya is fighting against. And I can’t wait to see all the creatures that each tribe has like one has elephants, of course Nammari’s tribe has these giant cats and one tribe has giant wolves (I noticed from a distance.)

In case you haven’t heard, James Newton Howard will be doing the score for the movie, making it the fourth time he’s worked on a Disney movie since the early 2000s. Oh and I’m so seeing it in theaters.

Thank you for reading and commenting! James Newton Howard is wonderful. I loved his work on Dinosaur, Atlantis and especially Treasure Planet. So the score is sure to be a treat.