Gremlins is a Darker Version of It’s a Wonderful Life 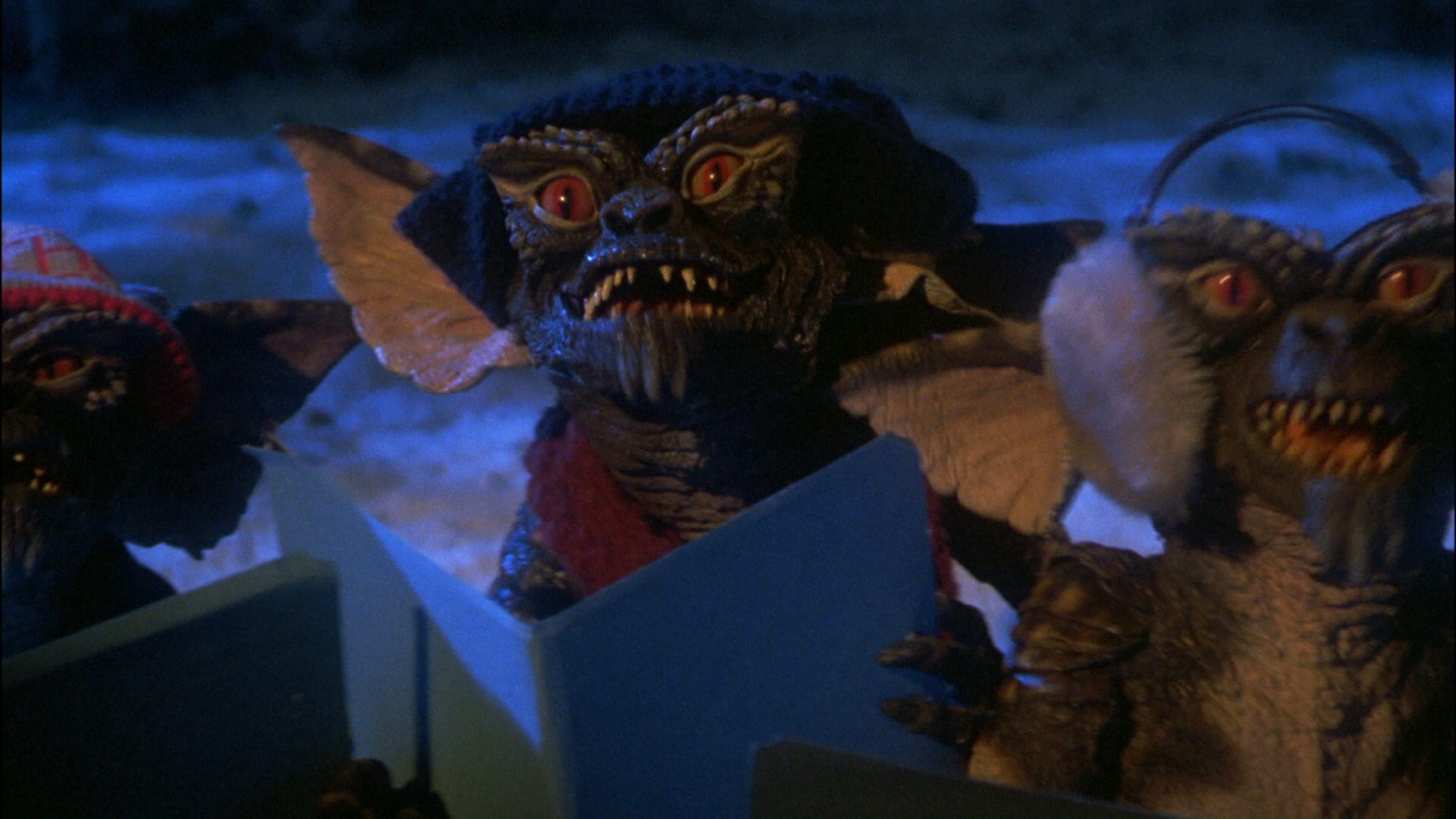 While making my way through my Christmas Movie Playlist, I decided to watch Gremlins again. I hadn’t seen it in years and kept forgetting to break it out at Christmastime (my brother actually owns the Blu Ray, so it was an out of sight, out of mind deal), but I was determined to rectify that this year. I wasn’t disappointed. I knew I liked it, but seeing it for the first time with more discerning eyes was an experience I just wasn’t ready for. Gremlins is a filmmaking marvel. Every detail is perfect; the casting, the character development (so economical!), the pacing and the way the Mogwai/Gremlin mythology unfolds, the unbelievable score – not just the music itself but the way it’s used – the camerawork, the mise-en-scène, it’s all incredible. (How crazy is it to think that this and Ghostbusters came out on the same day?) One thing in particular that struck me, though, was how much Gremlins resembles another, more traditional Christmas movie: It’s a Wonderful Life. In fact, Gremlins is a darker version of George Bailey’s story, a small-town Christmas fable with a decided lack of heroes.

*Spoilers for both movies*

Gremlins’ setting, a small town named Kingston Falls, has much in common with the Bedford Falls of It’s a Wonderful Life. It’s so tiny anyone can seemingly walk anywhere, the residents all know each other, there are the familiar businesses like the “movie house” and “Emporium,” a small pharmacy owned by a local, and all the charm and warmth of Bedford Falls. There is a dark twist, however: this is a Bedford Falls in which Henry Potter won. 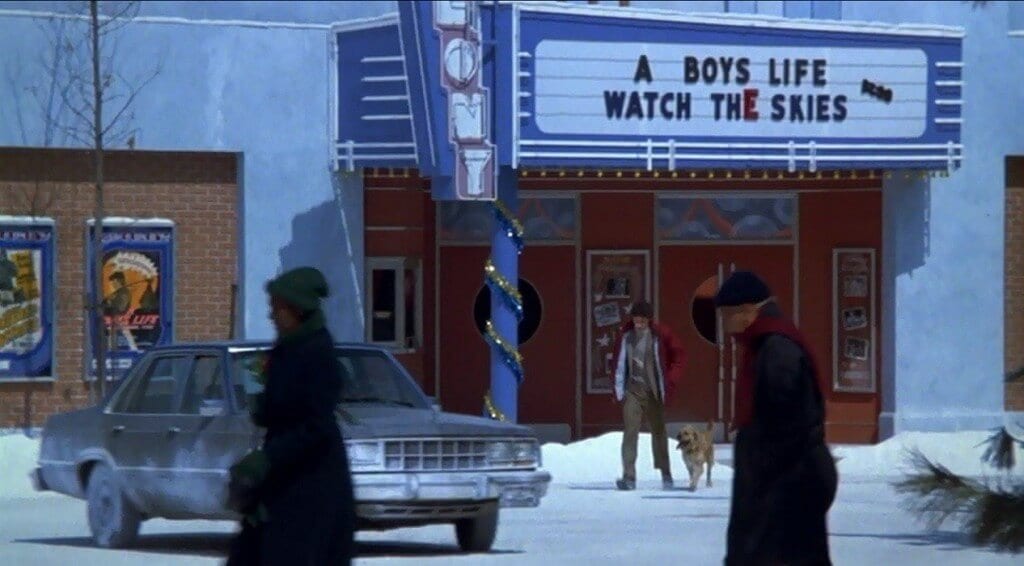 Billy Peltzer (Zach Galligan), the protagonist, works at the Bailey’s Building and Loan stand-in, the Union Savings and Loan. The manager, Mr. Corben (Edward Andres, in his final role) is a nice enough fellow who wants to do right by people – he decides not to fire Billy after a particularly egregious mishap because “he gets so sentimental around the holidays”– but the bank is owned by Kingston Falls’ own Potter, a wealthy woman named Ruby Deagle (Polly Holliday). Mrs. Deagle is a greedy old crow who shows disdain for the people who give her their business (not that they have a choice), delighting in foreclosing on a family’s home just before Christmas. She also owns a real estate company, so she’s got a monopoly on the town’s housing market. Does she sound enough like Mr. Potter yet? Add to this her salivating over killing Billy’s dog, secure in the knowledge that no one would stop her.

The people of Kingston Falls are all caught in the web of this, as George Bailey would say, “scurvy little spider.” The woman who pleads for the kindness Mrs. Deagle will never give is about to lose her home and can barely feed her children, Billy’s fellow bank teller Kate (Phoebe Cates) has to work a second job as a bar matron almost every night to make ends meet, and Billy’s mother Lynn (Francis Lee McCain) indicates that the Peltzer family is in similar straights; when we first see her she’s watching It’s a Wonderful Life, crying because she knows there’s no George Bailey coming to help her.

And that’s the rub: while a vile Henry Potterish woman rules it with an elegantly gloved hand, Kingston Falls has no George Bailey of its own. Mr. Corben could’ve been, but he sold out to Mrs. Deagle and now has to do her bidding. Billy has the spirit of George Bailey – he’s a dreamer, but has to set his ambition of being a comic book artist aside to support his family because his father is a dreamer himself, but without Billy’s sense of responsibility – but doesn’t have the position Bailey did and is effectively useless. The only one who could do something about it is Gerald Hopkins (Judge Reinhold), the vice-president of the bank; however, Gerald doesn’t have Billy’s morality and instead takes his inspiration from Mrs. Deagle. This is the scary result of the Potters and Deagles winning: they influence the next generation to succeed using their callous methods. While he’s a huge jerk, it’s almost hard to blame Gerald for being the way he is, as he sees all the goodhearted people around him struggling while the ruthless prosper. 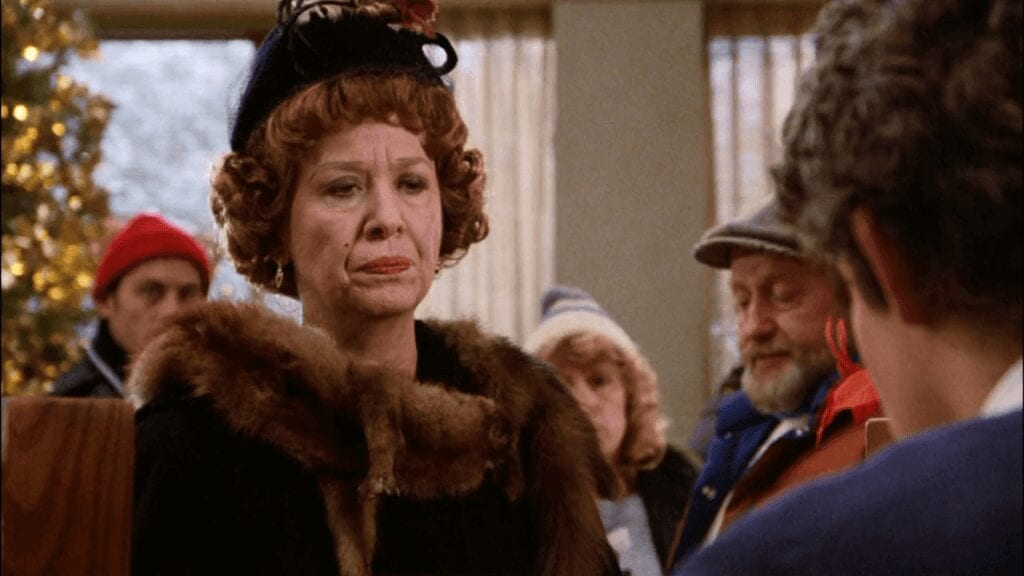 Kingston Falls is George Bailey’s nightmare come to life. It is a world where he was never born, and there is no one to save the town from the evil powerbroker who wants to own it. There’s no one to protect people like the Peltzers and the other struggling families, no one to back up the nobility of people like Billy and Mr. Corben, no one to inspire people like Gerald to put their fellow man ahead of their own ambition. In a world without heroes, the villains will reign.

But hope is never gone on Christmas, and though Kingston Falls is a world of despair, good is still alive in the hearts of everyday people. Billy is kind and friendly, devoting his entire life to his parents; his parents, in turn, love him and each other very much and do what they can for him. Kate takes care of her customers, and she is more attracted to Billy’s heart than Gerald’s money. Pete (Corey Feldman) brings the Peltzer’s Christmas Tree into the house for them instead of just leaving it on the porch. Mr. Futterman (Dick Miller) is friendly with the younger generation and freely offers them advice, harebrained though it may be. Mr. Hanson, the science teacher (Glynn Turman), helps Billy learn more about the Mogwai (of course he’s a scientist and has a natural curiosity, but it seems clear Billy considers him a friend, and Hanson never tries to steal the Mogwai from Billy or anything). Dr. Molinaro and his wife readily welcome Lynn into their home when she needs help. With no one looking out for them, the people of Kingston Falls look out for each other as much as possible.

That is what keeps them alive when the Gremlins attack (or most of them, anyway; it’s still a horror movie, at least partly). The Gremlins are an outside force descending upon this small town – a symbol of foreign invaders, one can infer, particularly in relation to Futterman’s distaste for foreign-made products and accurately predicting the emergence of the Gremlins – and with no heroes, the everymen and everywomen have to defend themselves, and each other. That’s why, for example, Lynn’s sequence protecting her home from the Gremlins is so powerful; she’s been hoping and praying for George Bailey to save her, but now she’s got to be her own hero, and she’s taken enough knocks in life that she fights the Gremlins more vigorously than anyone else would have. And Lynn uses everyday kitchen appliances against the Gremlins, the tools of a housewife. This is reflected again in the finale, as Stripe – the lead Gremlin – attacks Billy with a power saw and Billy uses a wooden baseball bat as protection, the little guy seizing anything at hand to repel a superior machine. Pete cuts the Christmas lights from which a Gremlin hangs with a pair of scissors, saving himself with yet another lowly item. 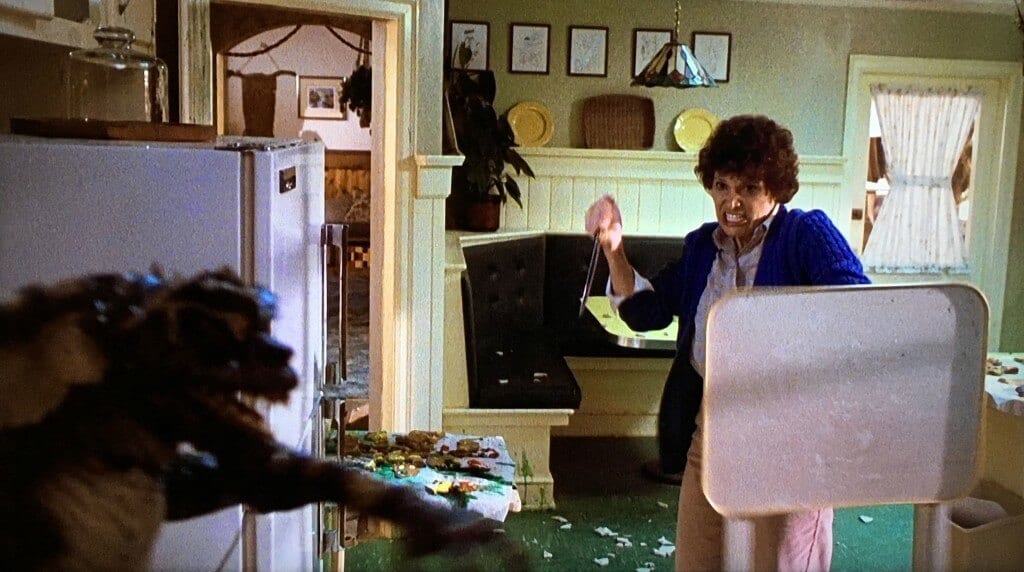 Conversely, when Mrs. Deagle is faced with the Gremlins, she can’t defend herself. She’s so busy lording herself over others she has no idea how to face a crisis, and her miserable personality ensures she’s got no one to help her. When the Gremlins cathartically shoot her motorized chair out the window, she is a victim of her own cruelty as much as of the Gremlins’ mischief. The police officers who laughed at Billy when he tried to secure their help (one of them played by Jonathan Banks of Breaking Bad and Beverly Hills Cop fame!) are similarly unable to get anyone to lend them a hand when they encounter the Gremlins. We don’t see Gerald after his brief scenes in the beginning, and that may be the film’s one flaw (seriously, this is such a well-made movie), but one imagines no one was coming to his aid when Stripe and friends came knocking.

There isn’t a huge wrap-up when all is said and done, and what’s there is focused mostly on Gizmo and mankind’s neglect of the natural world (another theme that can be applied to the film), but the general impression is that everyone left alive is going to be okay. With Deagle out of the way, the town may be free from her punishing policies, and Mr. Corben may now find the wherewithal to stand by his principles. People like Mrs. Deagle, and Mr. Potter before her, will eventually die out, alone and unloved, but the goodhearted will survive and put things right again (or “Blessed are the meek, for they shall inherit the Earth,” if you’re inclined that way). That’s a pretty nice way of wishing the audience a Merry Christmas.