Gran Turismo 7 has launched to a rocky start after its initial slew of glowing reviews. Patches introducing more problems and worse reward payouts and a 30-hour server maintenance blackout resulting in virtually all single-player content being unplayable have resulted in the familiar Metacritic review-bombing situation. What was initially a commendable customer rating in the 7s is now a sad 2.6. Let’s examine how all of this happened in detail.

After patch 1.06, players noticed they couldn’t pass any of the rally events in the game, though not for lack of skill. The pre-selected tires were somehow switched to comfort and sport tires, which are astronomically terrible for dirt terrain. This resulted in many players, like me, spending up to an hour failing the dirt license test and blaming our skill when it was just an error with the patch.

Here’s a video demonstration of the dirt events before and after the fixed patch:

The most recent patch (a patch for the patch) was supposed to fix this glaring issue, and it finally did, but at a cost. All reward payouts have been cut. This nerfed payout patch was due to players understandably grinding an event exploit that netted them some quick cash so they could finally get those uber-expensive cars. The Fisherman’s Ranch event, in particular, had payouts cut by over half due to patch 1.07. What used to be a short event paying 65k for 1st place has turned into 30k for 1st. Check out this chart comparison provided by VGC:

According to Discord user ddm, the following races have had their payout changed (new payout in bold):

Understandably, fans were pretty upset to notice that nearly every event reward was cut, not just the exploit ones. Some customers returned the game; some, like myself, wanted to check the new rewards first-hand. Well, as I attempt to start up the game and see how much they further ruined it, I’m met with a long loading screen, followed by a server maintenance pop-up. Server maintenance essentially renders the very core of GT7 unplayable until it’s done. The always-online nonsense means that even the single-player meat and potatoes are unavailable until maintenance is finished. The only thing you can do when maintenance is underway is practice races with nothing carrying over to your file. You can, however, access your selection of cars during this restricted period.  Even though the game tells you to use their pre-selected cars in the meantime, you can find your car collection in the race options menu. As I receive the maintenance news, I think, “Okay, hopefully, they’re going back on their decision to nerf rewards. Cool. I’ll check back tomorrow.” 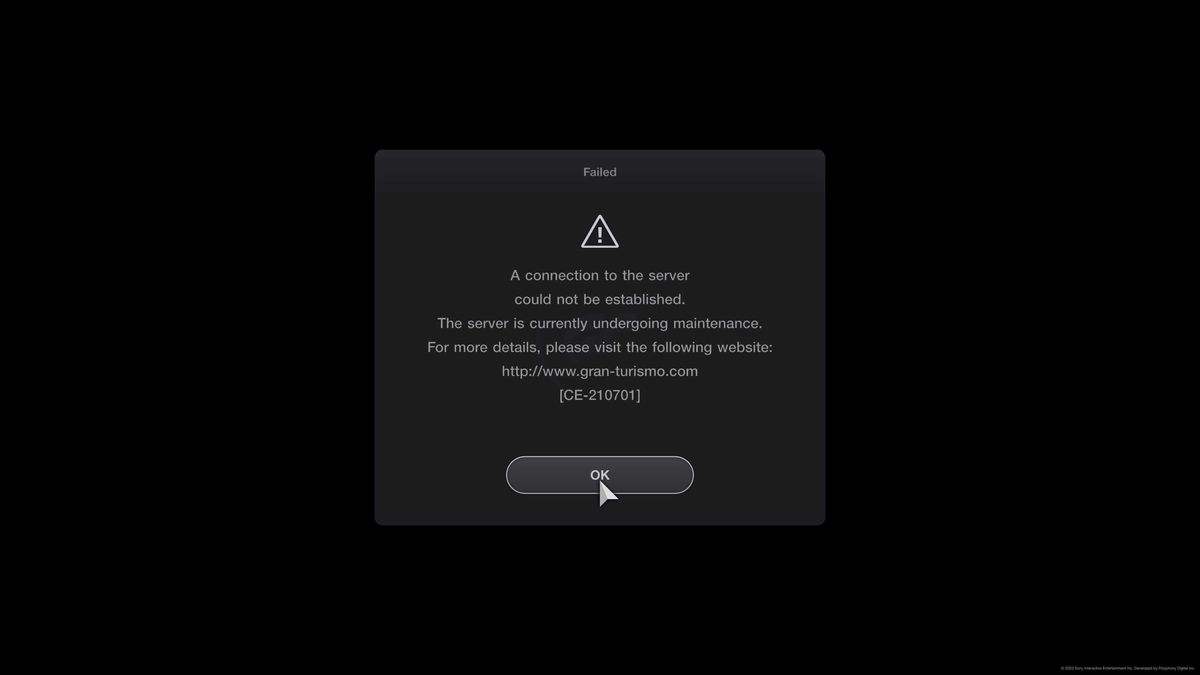 Fast-forward to Thursday evening, and I’m met with the exact same server maintenance pop-up. The core of GT7 has been inaccessible for 27 hours due to always-online server connections. Mind you, this is a $70 PS5 game, not some free-to-play one. Paying money for a game you can’t play due to always-online problems isn’t exclusive to GT7, though. Back at the launch of FF XIV Endwalker, the queue times were up to 6 hours long in many cases. This was due to the sudden popularity and influx of players that overran the servers at the launch of the newest expansion, rendering one’s paid game unplayable at launch. Though, in GT7’s case, it’s a single-player experience being locked behind always-online requirements.

Add to that the embarrassing fact that the inaccessibility isn’t due to having too many players on; it’s because of a near-catastrophic error with save files and the game itself. GT7’s director clarified the reason for this downtime period after all was “resolved,” saying, “… in order to prioritize the safety of the save data of the users, we decided to interrupt the release of the 1.07 update, and to make a 1.08 correctional update.”

A Tale of Two Shittys

And though this 2-day server outage is now resolved, GT7’s biggest problems are far from over. Both the further emphasis on microtransactions and the server outage demonstrate the two biggest problems inherent in GT7: always-online service and the microtransaction economy model. Providence has fallen on GT7, folks; in attempting to push microtransactions further through cut payouts, the game was bugged and forced into maintenance for almost 2 days. Microtransaction economy and always-online DRM amalgamated into one ugly monster, clear as day as to the pernicious nature in one glorious moment. Not being able to play your $70 single-player campaign due to further microtransaction implementation was the ugly troll showing itself for what it really is. These 2 issues will always be GT7’s greatest blemish. Both Sony and Polyphony Digital are to blame here – Sony for forcing microtransaction models in the heralded racing game, and PD for teaming up with FIA, who demand strict server upkeep across all accounts to regulate and prevent cheating.

What made things even worse is that Polyphony Digital remained silent during the server downtime; no word from them for 27 of the 30 or so hours. Well, when the game finally opened back up, and maintenance finished, they finally said something about the whole kerfuffle. Series director Kazunori Yamauchi released a statement addressing all of the server problems earlier.

To all our users,

I wanted to explain what happened in this update.

Immediately before the release of the 1.07 update, we discovered an issue where the game would not start properly in some cases on product versions for the PS4 and PS5.

This was a rare issue that was not seen during tests on the development hardware or the QA sessions prior to the release, but in order to prioritize the safety of the save data of the users, we decided to interrupt the release of the 1.07 update, and to make a 1.08 correctional update.

This is the reason for the delay.
My sincere apologies for the late report to everyone.

Also in this update, some event rewards have been adjusted. I wanted to also explain the reasons for it and our plans going forward.

In GT7 I would like to have users enjoy lots of cars and races even without microtransactions.
At the same time the pricing of cars is an important element that conveys their value and rarity, so I do think it’s important for it to be linked with the real world prices.
I want to make GT7 a game in which you can enjoy a variety of cars lots of different ways, and if possible would like to try to avoid a situation where a player must mechanically keep replaying certain events over and over again.

We will in time let you know the update plans for additional content, additional race events and additional features that will constructively resolve this.
It pains me that I can’t explain the details regarding this at this moment, but we plan on continuing to revise GT7 so that as many players as possible can enjoy the game.
We would really appreciate it if everyone could watch over the growth of Gran Turismo 7 from a somewhat longer term point of view.

This basically boils down to, “We’ll fix all the problems at a later point; oh, and sorry for not being able to play your $70 game! Still, you’re not getting anything for compensation, so just sit down and wait for more content and better payouts.” At least, that’s what I take from his statement. He’s doubling down on the current in-game economy and defending it. I agree that the high-end cars should be harder to obtain, but they should also be appropriately obtainable for the skill and time players put into the game, not rewarding whales with more cash than skill in a pay-to-win model.

What makes the sting all the more potent is that early access review copies didn’t have any microtransactions. Not until the game went live for the general public did the microtransaction shop open up – though it’s not surprising, and reviewers should have known they would be included just based on their presence in GT Sport. It doesn’t surprise me or other players one bit, though it is much worse than GT Sport was about the credit earnings and vehicle/parts cost.

When I see someone racing laps in a gorgeous Pagani Huyria in a multiplayer lobby, I’d like to think they earned that with their stellar achievements in-game, not because they have access to mom’s credit card at home. And when I say stellar achievements, that’s not mechanically grinding the same boring race for hours on end, but winning 2 hour-long endurance races on the Nurburgring with all assists off and professional opponents and other career mode races that pose a fun challenge. Exclusive invites for legendary cars could also be for players who specifically buy multiple of a particular car brand, similar to what Ferrari does with its loyal customers in real life. Why is it just random invites?

While Yamauchi is correct in making the very high-end cars take longer to get, the method of getting there is currently pretty terrible. He says there will be better methods of obtaining credits in future updates, but we’ll see.

Currently, the route the game seems to be laying for the player is collecting cars via microtransactions. They’re not as overt as some other games, but the push is certainly there.

There’s a list of ways the game tries to coerce you into spending cash on microtransactions to get credits.

1. You can’t sell any cars at all.
2. Can’t remove certain upgrades from your car, forcing you to buy another of the same car if you want it stock.
3. Dramatically increased car prices.
4. Rolling start races starting you in the very back, forcing you to upgrade and tune or buy expensive cars and parts to catch up.
5. Low race payouts
6. Patch making already-low payouts even lower
7. Heavy presence of roulette tickets (loot boxes) clearly weighed to net you the lowest prize a majority of the time.
8. Perceived scarcity in the legends shop and a limited-time, random rotation of exclusive cars, forcing grind and/or microtransactions to grab them before they’re gone for who knows how long.
9. Trophy for buying the same car 10 times (I’m not making this s*&t up).

That’s 9 different ways they incentivize the player using their real money for microtransactions rather than just grinding them in-game; I’m sure you can find even more.

It’s not all doom and gloom, though; there is precedent for being at least slightly optimistic that some meaty new content is on the way. GT Sport’s entire single-player “campaign” was added in an update, as were up to 100 new cars and a handful of new tracks. This is shaping up to be a live service long-term game like GT Sport was. It might be worth checking back with GT7 later this year or next because we may be looking at an entirely reworked and improved game with various new modes and features. Yamauchi promises more engaging and fruitful methods of obtaining credits in the future. Let’s hope it’s in the form of campaign content and better payouts and not another microtransaction scheme to add to the pile.

For an in-depth and well-articulated discussion on this whole GT7 mess, I’d recommend checking out HSG Automotive’s latest video. His views line up with my own: the in-game economy is a mess, despite the core gameplay foundation being the best in any racing game we’ve played. There’s a great foundation for a game here, but it’s, unfortunately, wrapped around a bunch of nonsense at launch.

Hoeg Law also has some interesting things to say about it from a legal perspective: