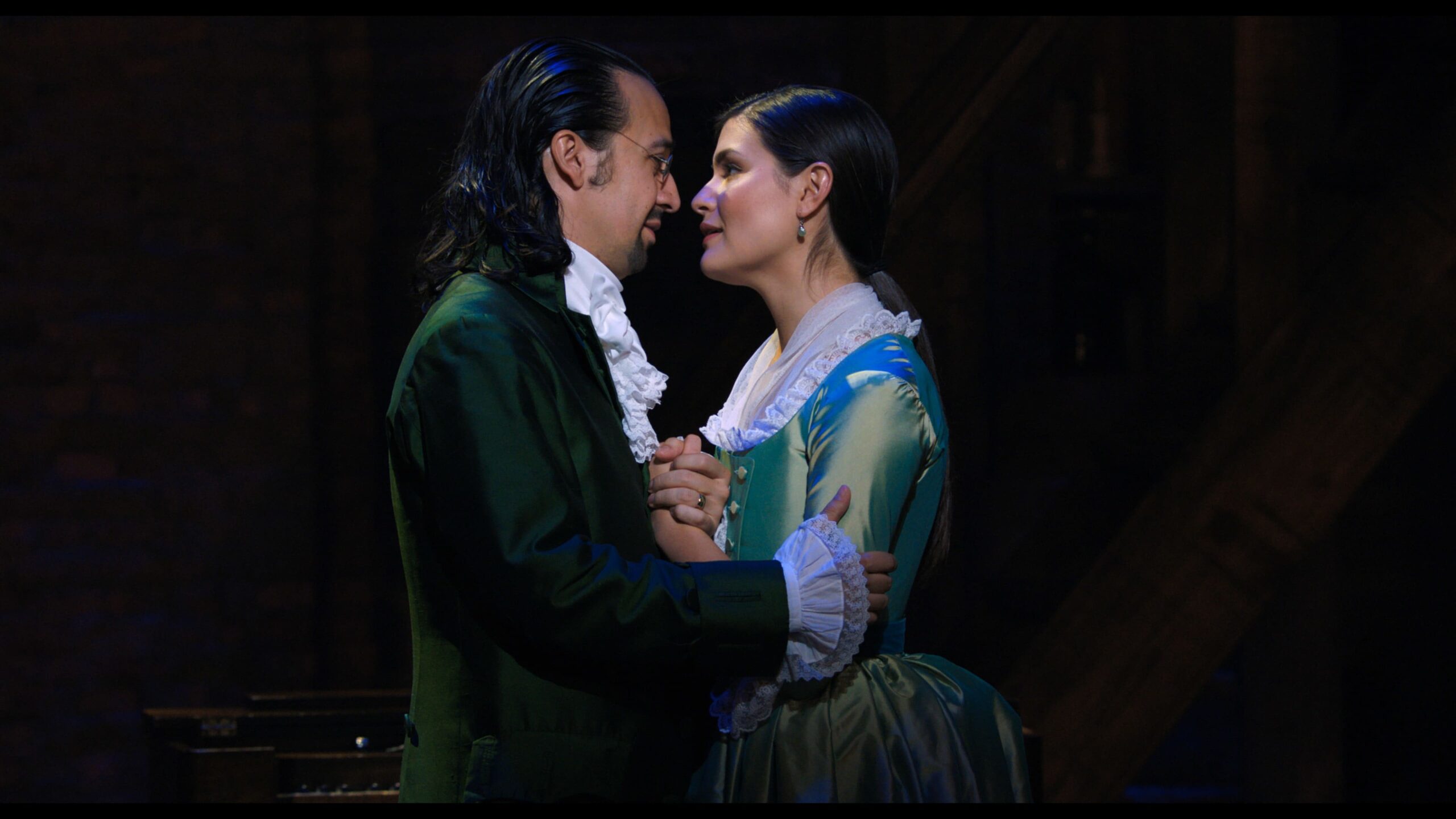 Lin-Manuel Miranda arrived and promptly made a name for himself with 2008’s Tony-winning musical In the Heights, but he was just getting started. Miranda’s second Broadway sensation has become synonymous with the man himself and further develops some of the themes from In the Heights while exploring some new ones. In Lindsay Ellis’ Moana episode of her podcast Musicalsplaining, she and Princess Weekes said that Miranda’s other works, Hamilton and In the Heights, are too similar to each other musically and are both based on his own life. I find the first claim nothing short of ludicrous, although I agree with the second to an extent. I just don’t see why that would be a bad thing. The themes a writer explores in their work can give the audience an idea of who they are and what they value. This is even more true when they revisit the same concepts in different works. Additionally, I like it when the art someone creates is based on their experiences. Isn’t the point of experiencing art to get out of your head and see the world from somebody else’s perspective? I’ve already talked about In the Heights and why I like Lin-Manuel Miranda in general, but today I’m taking a look at my favorite of Miranda’s works and the one that’s already defining his career less than a decade after its initial run. 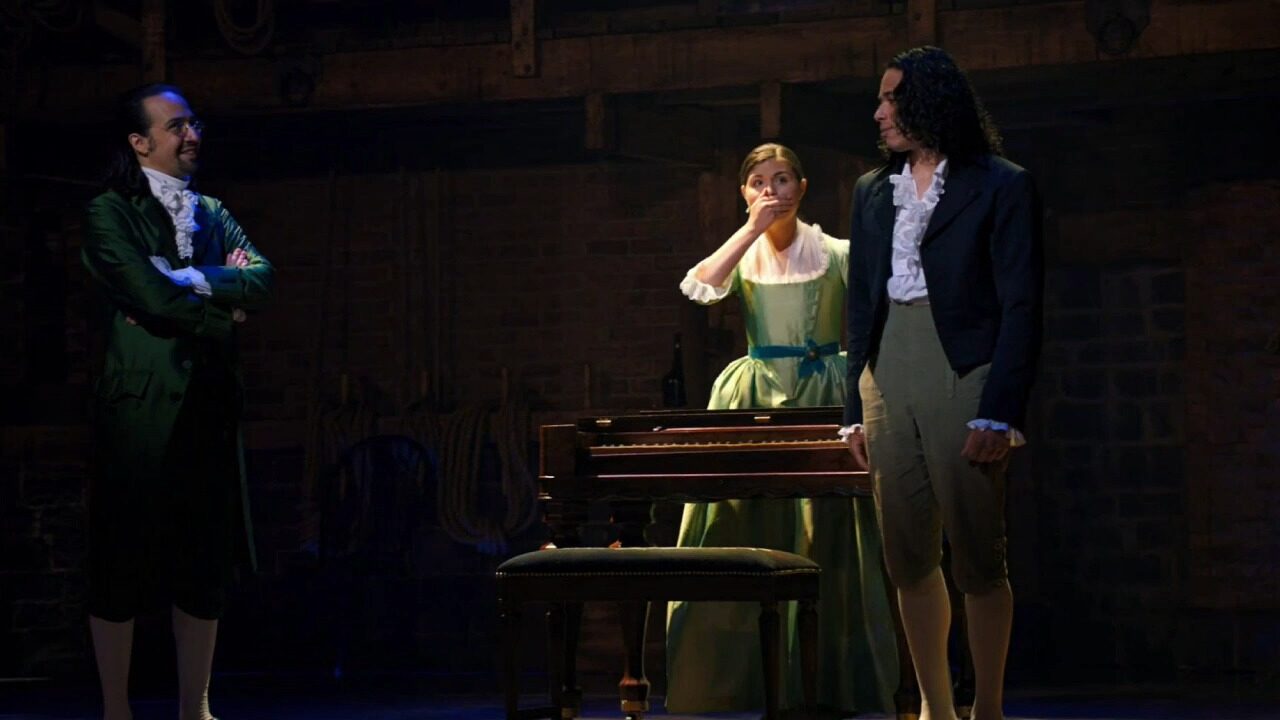 An obvious thread throughout Hamilton is the concept of a person’s origin and how they can be shaped by it or, in some cases, defy it. This is a running theme in Miranda’s musicals, except for comedic mini-musical 21 Chump Street and maybe Bring it On, which I haven’t heard/seen. In In the Heights and Moana, the leads are products of the cultures they grew up in. Moana is elated to discover that her ancestors were voyagers like her, and Usnavi initially feels more connected to his birthplace than his home. By virtue of its source material, Hamilton breaks this trend and heads in the opposite direction. The show’s comment on Alexander Hamilton’s parentage is made clear early on; the title song introduces us to “The ten-dollar Founding Father without a Father.” Fatherhood itself is a major focus of the show, be it the Founding Fathers – particularly George Washington – as a father figure for Hamilton, or Hamilton and Aaron Burr becoming actual fathers. Hamilton is also shaped by his orphanhood, much like Usnavi, but his response couldn’t be more different. Hamilton is the story of someone who, through tremendous talent and sheer hard work, exceeds his humble upbringing to build his own legacy. 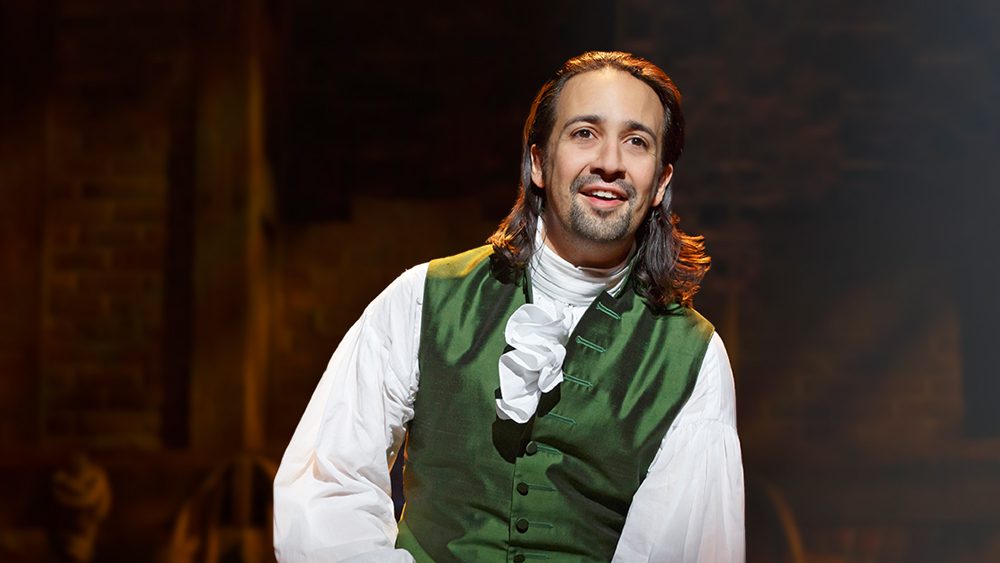 Another significant theme is the fundamental difference between Hamilton and Aaron Burr that leads to their falling out and Hamilton’s death. This, too, is established right out of the gate, as Hamilton’s loudmouth rambling clashes with Burr’s thoughtful, reserved nature in “Aaron Burr, Sir.” In the following number, “My Shot,” Hamilton’s tenacity and quick, blunt wordplay earn him allies as well as set himself and Burr on diverging paths. Burr’s advice to “Talk less, smile more” goes in one ear and out the other as the outspoken Hamilton’s words gain him friends, power, and influence. He even uses the power of the written word to woo his future wife, Eliza Schuyler. Hamilton’s exploits draw the attention of George Washington and other generals, leading to his receiving the promotion Burr wanted. At the wedding of Alexander and Eliza, Burr confides in his friend and rival Hamilton that the woman he loves is married to a British officer. Hamilton’s response is, “If you love this woman, go get her/What are you waiting for?” Hamilton shows that not only will he relentlessly and unapologetically pursue whatever he wants, but that he can’t fathom why someone would not do that. In “Wait For It,” we get the culmination of all of Burr’s frustrations, as well as the reasoning behind his reticence. Burr believes that good things come to those who wait and is shocked at the success of someone who never waits for anything. Burr is an orphan like Hamilton (“If there’s a reason I’m still alive when everyone who loves me has died, I’m willing to wait for it”), but was brought up differently and, as such, has an opposite view on the matter. Burr, despite losing his parents as an infant, sees himself as the protector of their legacy. This makes perfect sense, too; Burr is the custodian of a great American family while Hamilton is a bastard orphan from a backwater island in the Caribbean. Burr envisions his position as the scion of a proud line while Hamilton’s past brings him only shame and mockery. For all the two share, their differences shape their dynamic and, ultimately, lead to tragedy. 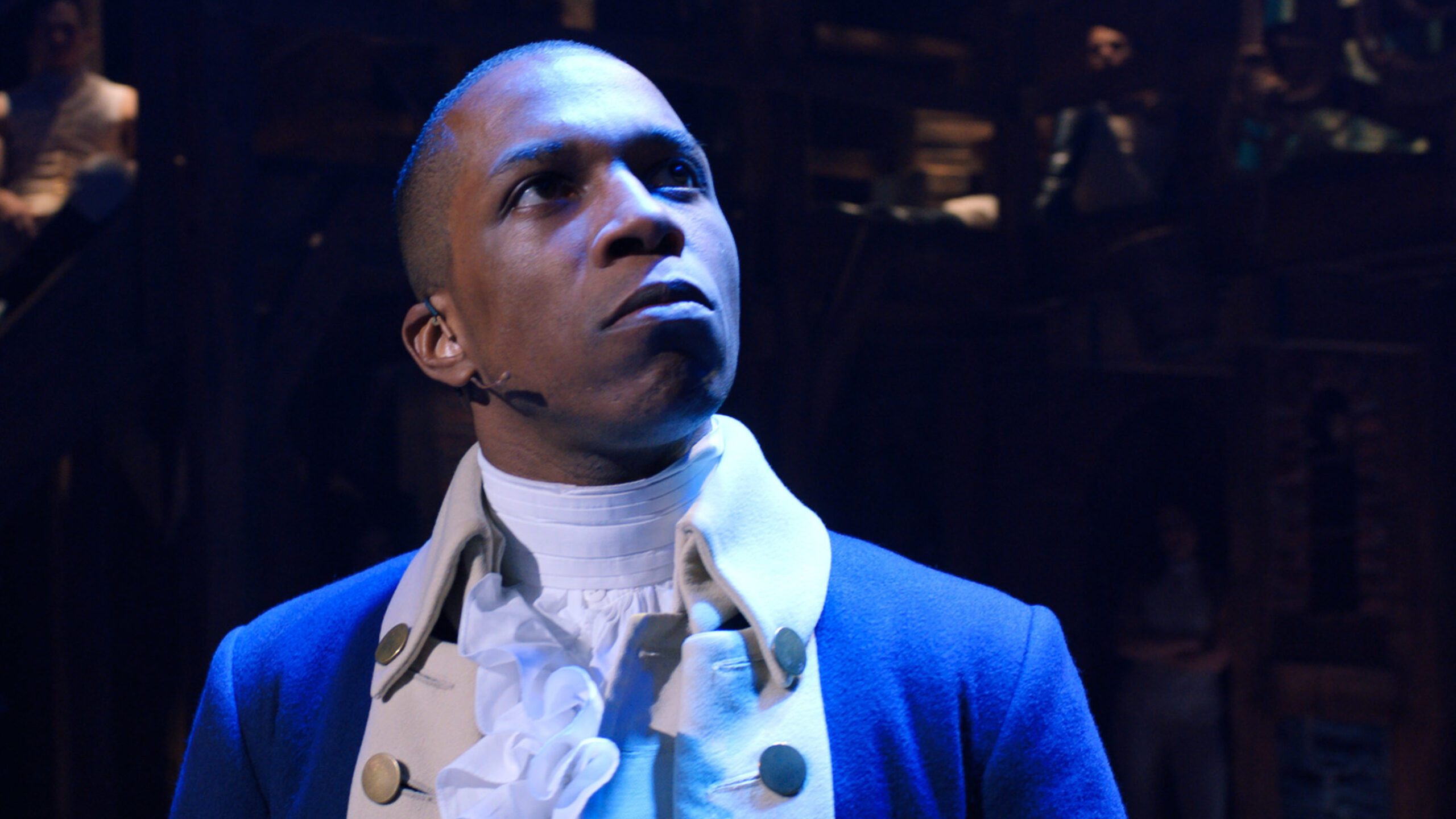 One of the greatest similarities the two men show comes in “Dear Theodosia,” a song whose title refers to real letters Burr wrote his only (legitimate) daughter. This penultimate song before the act break (not counting the Laurens Interlude, which is mostly spoken word and not included on the soundtrack album) gives Hamilton and Burr their most humanizing moments in the show. They share remarkably similar sentiments of pride and love toward their children. I get chills when Hamilton sings, “My father wasn’t around,” which Burr echoes, and they pledge not to do that to Philip and Theodosia. “I’ll do whatever it takes/I’ll make a million mistakes” is another exchange that gets me every time. This song is a duet, but it’s also an internal monologue. One of the show and history’s greatest tragedies is that what they shared was arguably more important than what separated them. One wonders what might have happened if Hamilton had spent more time on these thoughts as opposed to skewering political opponents. 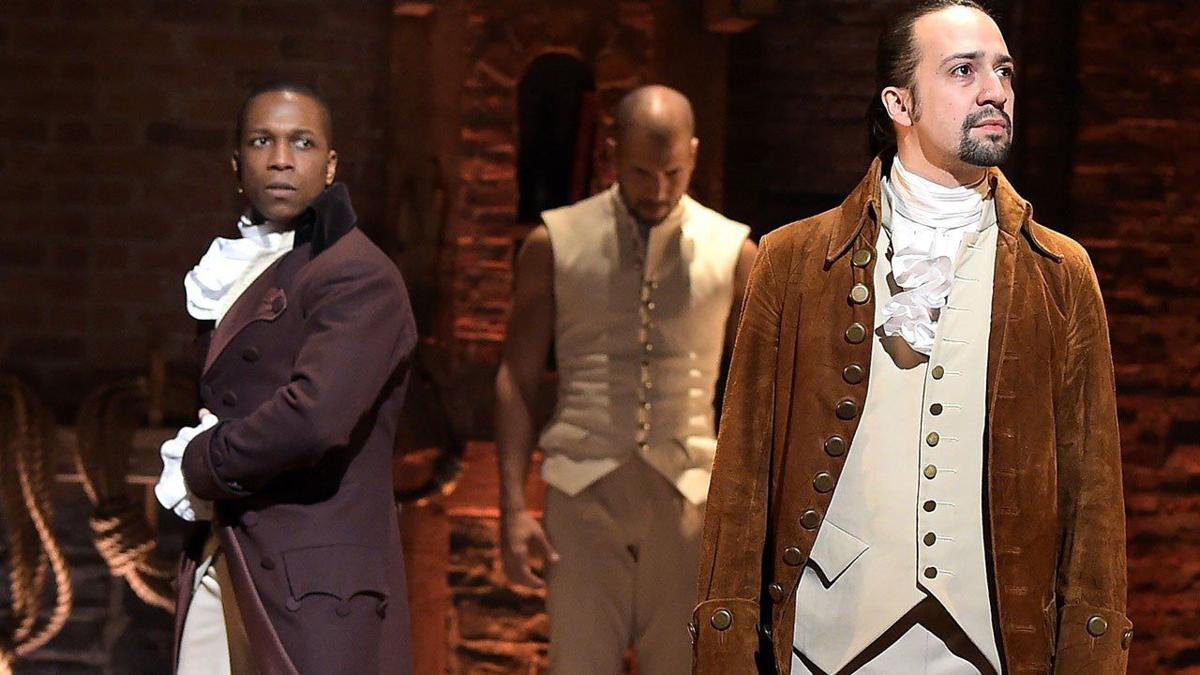 It’s not enough for me to enjoy things; I have to know why. I’ve found that both Hamilton and Burr (at least as they’re portrayed in the musical) are extremely relatable in ways that are, frankly, troubling. I live with Asperger’s syndrome, a high-functioning disorder on the autism spectrum. As such, I’ve been prone to outbursts not unlike those displayed by Hamilton. I’ve also said things that I later decided were unnecessary or even harmful, sometimes immediately after I’ve said them. While I don’t feel the need to argue every point with people (I have the opposite problem), I know people just like that. It makes sense that Burr would feel left behind compared to his more successful contemporaries. It’s very relatable, and in our modern time, Burr isn’t even considered a Founding Father despite his accomplishments and contributions to the war effort and the eventual American government. However, Burr often holds back important information that could help people or change their minds. In the musical, Hamilton asks Burr to write the Federalist Papers with him, again trying to coax him into taking a stand for something. “If you stand for nothing, Burr, what will you fall for?” isn’t just a dramatic callback to an actual quote from Alexander Hamilton, but a taunt continually hurled at someone who “(waits to) see which way the wind will blow.” Whether it be in personal matters or his public reputation, Burr “keep(s) all (his) plans close to (his) chest,” while Hamilton is willing to publish a document about his extramarital affair, which is… certainly a choice. It’s also interesting that the ultimate implosion of Hamilton’s political career happens because he tried to “Write (his) way out,” which had worked so many times in the past. It’s easy to look at this and the final duel and decide that Hamilton was right and Burr was wrong, while some would likely say the opposite. But both mentalities are extreme, and that’s the problem. Had they each taken a page from the other’s book, things could have been different. Yet Miranda seems to know that Hamilton’s life is like a Shakespearean tragedy, even comparing him to Macbeth. The collision of these big personalities led to an end that was all but inevitable. 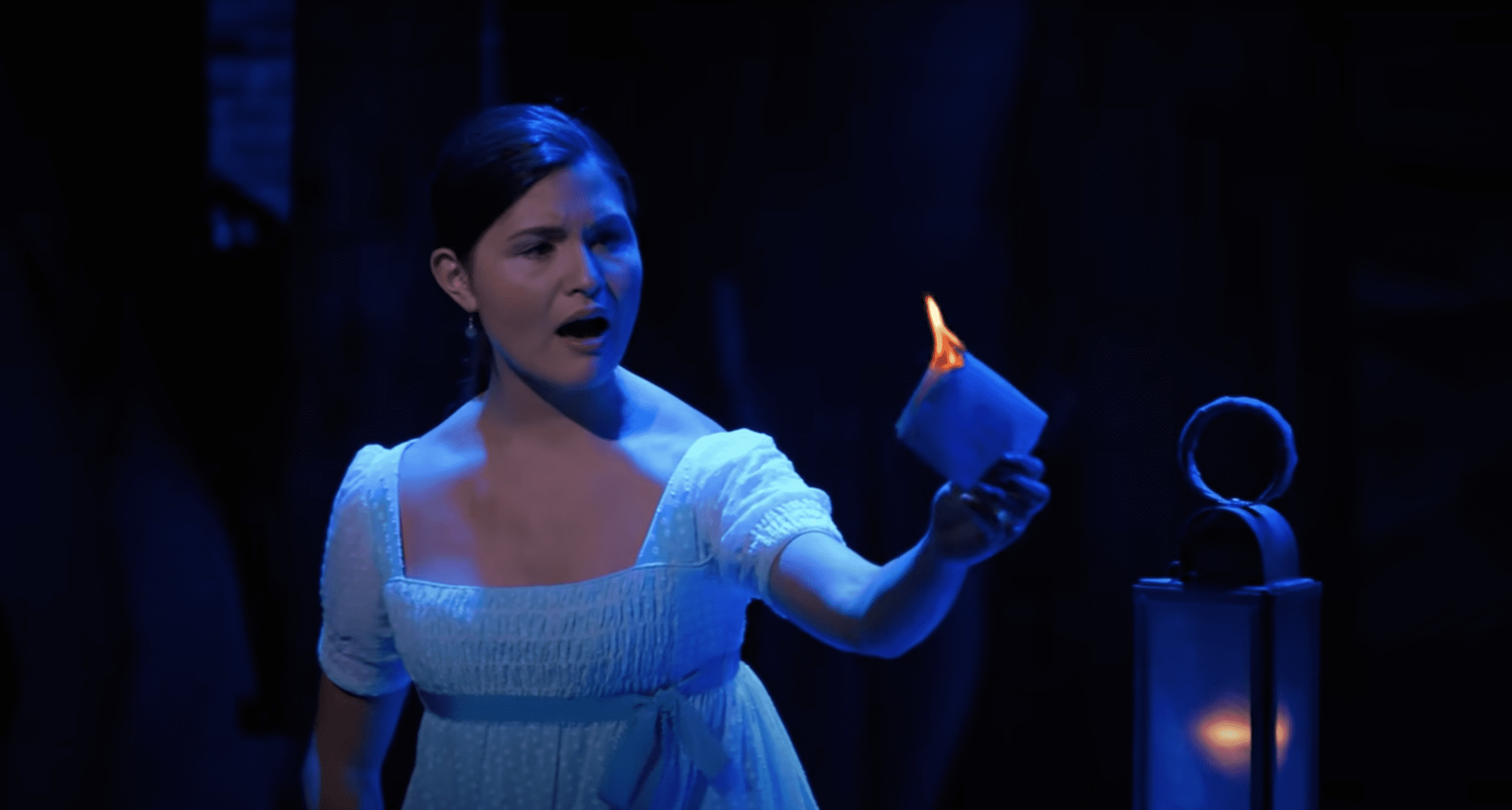 The greatest triumph and irony in the show is that Hamilton’s words didn’t define his story; he didn’t get to dictate his own legacy. The big emotional payoff is that Eliza, the person who loved him the most and to whom he arguably did the most harm, became his biggest posthumous defender and protector. In real life and in Hamilton, Eliza spent the remainder of her life doing charitable deeds and cultivating Alexander’s papers. She sought to undo the harm he did to his reputation, and that was done after his death by political enemies. There are a lot of similarities between Alexander and Usnavi in In the Heights, but the twist is that Eliza is the one who tells the story. Alexander may be the lead, but the story isn’t told through him. Burr narrates the show, and Eliza is given credit for keeping the story alive to allow this to happen in the first place. As much as I like In the Heights, this is why, in my opinion, Hamilton became such a sensation. It has amazing dance choreography and earbug tunes, but the continual surprises, thoughtful characterization, and rich, thematically satisfying text are what made Hamilton a once-in-a-generation experience.