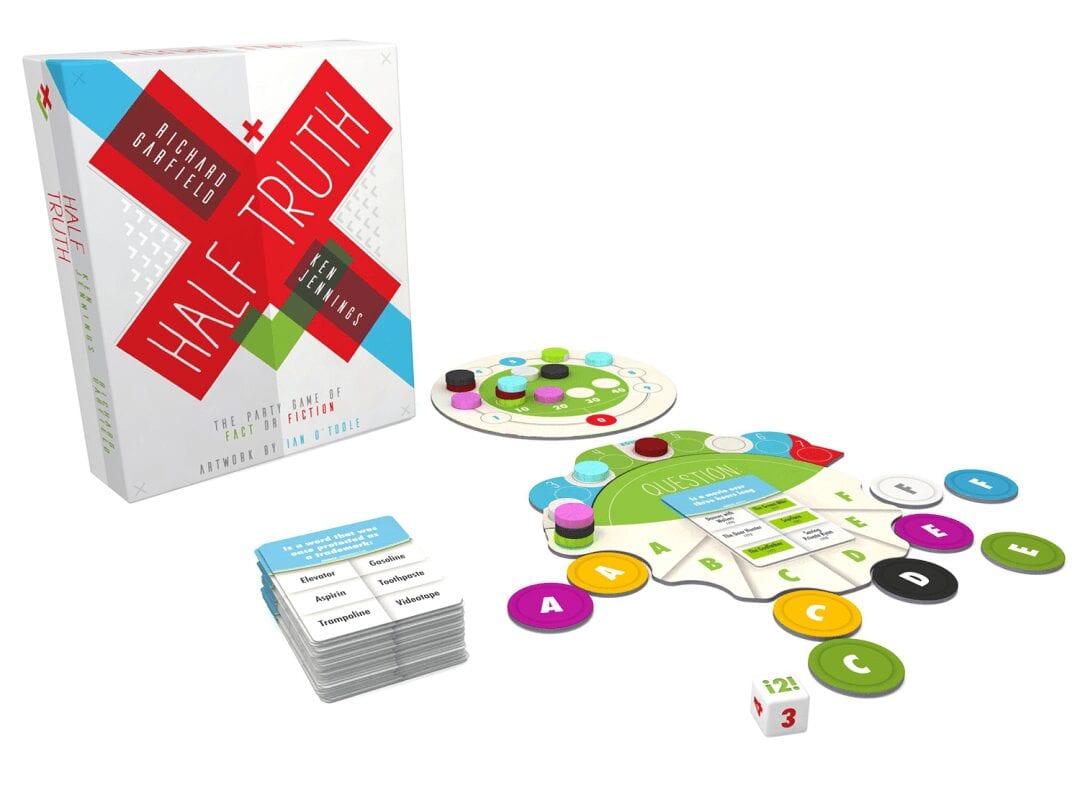 Since speaking with Ken Jennings and Richard Garfield last year about Half-Truth’s Kickstarter campaign, the game has been one of my most anticipated releases of 2020. When I got the opportunity to speak with Mr. Jennings and Mr. Garfield via phone on March 27th ahead of its official release, I jumped at the chance. This time, we talked about their reactions to the campaign, Mr. Garfield’s previous party game Hivemind, Mr. Jennings’ Jeopardy! win, and much more.

Now that the campaign is nearing its end, how do you think things went?

Richard: Well, the game took longer to get into people’s hands than I had hoped, but I’m really pleased with the final product. All the work of the graphic artist [Ian O’Toole] and the design we put into the way it looked, worked quite well. In the end, I guess I’m happy.

Ken: I remember getting  my box of games – we got a few samples. I pulled it out, I was like “Wow, this is heavy.” It made it feel very substantial and worthy. So I hope there’s other people like me who are engaged by density.

R: I was stunned by how heavy it is. I couldn’t understand it. So much paper being packed into that size of a box.

What most surprised you about the backers’ feedback?

K: Yeah, my favorite thing I found, which is kind of complicated webcam setup, is that people who play Half-Truth can play with three or four friends in different households, social distancing all across the country, and I was gratified by all the effort and that people seem to be having a good time. Even in that kind of weird environment, it couldn’t kill what should  be a social party game. That was nice that it’s helped people get through this.

Yeah, in a weird way, it birthed a new way to play the game you guys hadn’t even thought of.

R: Certainly that would’ve… seeing the future to be able to design a game for the backer.

What sorts of things go into the final fulfillment of Half-Truth, and how are the folks at Studio 71 facilitating the process?

K: We’re kind of removed from that. Like, luckily, because that seems like the most logistically maddening part of the whole thing to me. Richard and I have been helping out with some of the higher-level rewards. People get to customize their own game cards, so Richard would kind of very cleverly personalize these trivia questions for these Kickstarter supporters. That, I thought, was pretty fun and cool.

R: It’s more about my relationship with the publishers then the platform. The people we’ve worked with [Studio 71] have helped us a lot with this and have gotten the job done, and so I’d certainly be willing to work with them again and happy to participate in whatever platform they wanted to work on.

K: For other projects where it makes sense, I mean, we use Patreon for our podcast [Omnibus], and that’s worked where advertising sales [did] not, so I’m a big believer.

Has there been any talk of doing digital cards or expansion packs?

R: Certainly, we’re talking about digital implementations, and yes, it would certainly lend itself well to such a game. No plans right now. I would love to see; if the demand’s out there, we’ll certainly do that.

K: As far as expansion packs go, we have talked about that. Richard and I agreed there should be cards that target younger players, are a little more kid-friendly. That’s an obvious idea for card extension. 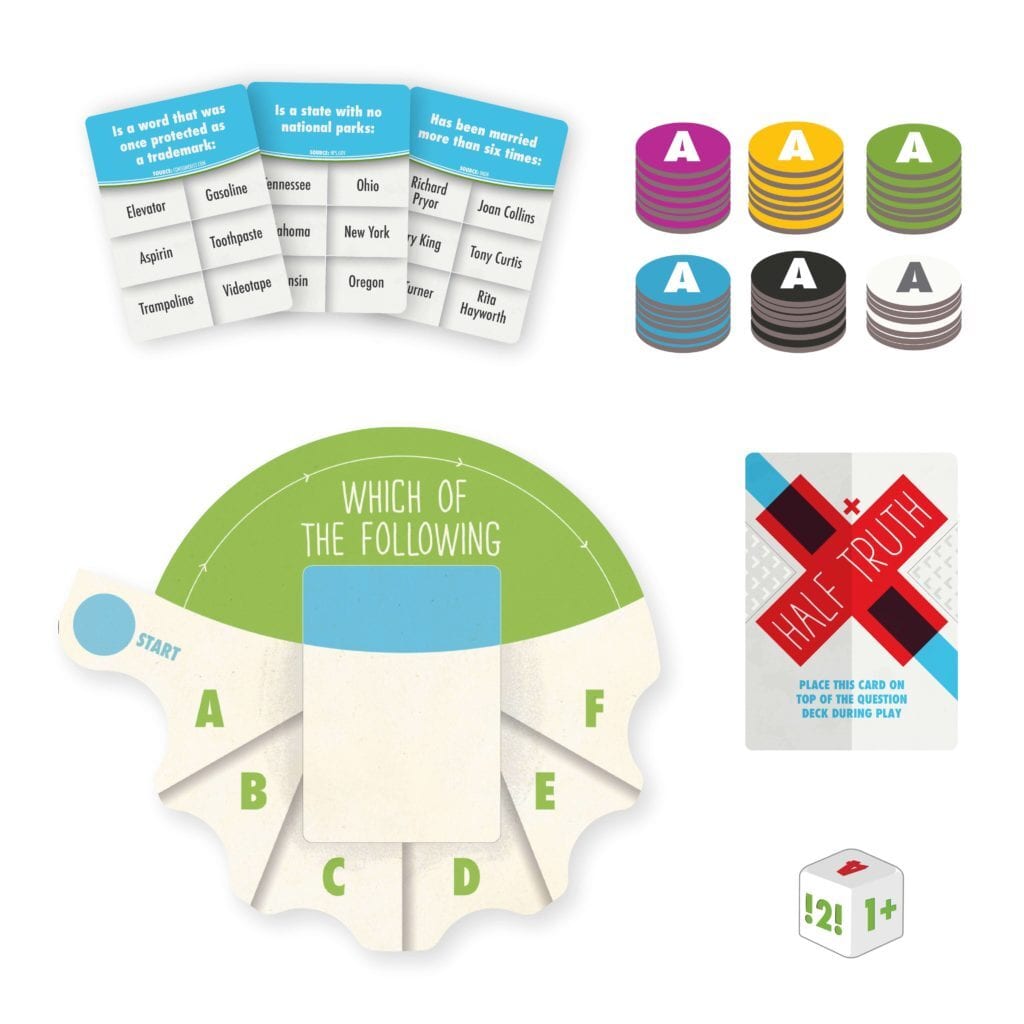 Do you believe your recent success on Jeopardy! was assisted by your work on Half-Truth?

K: Absolutely. I would have gotten destroyed if I hadn’t. You could tell how things were going when the final question was this creator of Magic: The Gathering… I’m joking around, but honestly, keeping your hand in with trivia really does keep you sharp. I mean, it’s kind of [a] mental puzzle. It’s not just about  knowing the stuff; it’s being able to retrieve it, being able to puzzle things out. And, honestly, I think having a full-time career in trivia has really been one of the things that kept me playing Jeopardy! at a high level longer than I would have thought was possible. It’s kind of a young person’s game. To be able to still hang in my forties was really gratifying.

I couldn’t help but notice in your interviews for Jeopardy!, you mentioned something you had said in our previous interviews, that you were forgetting things, but I think your win made it pretty clear that’s not the case at all.

K: Well, I think it is clear that it definitely helped the GOAT tournament at the last possible time that they could before, like, the brain decay set in. My recall’s a little slower, but I got away with one.

Richard, I wanted to know, how has Half-Truth impacted your own game design, and are you looking to further explore what these kinds of games have to offer?

R: I’m always interested in how different groups of people play different sorts of games. And so I’ve done one party game in the past, Hive Mind, and Half-Truth is certainly very different from that, but sort of appeals to the same sort of people. I would be very interested in making more games in those areas, but I don’t see doing another trivia game like Half-Truth. I’d be more interested in designing something that does something different. If I had some trivia I wanted to do, I would try to get that into the Half-Truth metric.

What, in particular, from Hive Mind did you bring over to Half-Truth to create that kind of experience?

R: There were many different versions of Hive Mind that I’ve worked with over the years. The original concept was published as What Were You Thinking? So, one of the things which came to me through working on Hive Mind was this idea of a multiple-choice answer. At first, I thought that that would limit the questions, but the questions were still fun. In some ways, when Hive Mind was done, I was still not particularly interested in trivia because I hadn’t yet been enlightened by Ken’s book Brainiac. And so Hive Mind was  mostly a holistically anti-trivia game. It rewarded knowledge, but your knowledge of people rather than things.

What are you both working on next, and can we expect collaborations from the two of you in the future?

K: I do my podcast Omnibus twice a week. I have a new game show called Mastermind on GSN April 6th at 4:00 PM. I’m pretty away with my next book, A Travel Guide to the Afterlife. Honestly, the quarantines been great for my publishing deadlines, so hopefully that’ll be out within the year. I’d love to work with Richard again. I don’t know if he’d want to come on my game show, but he’s always welcome.

R: Oh, I’d be delighted. I’d certainly love to work on a project with Ken if something comes up that’s appropriate. My current projects – I’ve just been tinkering with a bunch of different games and looking for inspiration among them.

Ken, I wanted to know about your new trivia show. What’s that going to be about?

K: It’s a trivia show where I’m on a panel of experts that plays against normal folks, and if they can beat the mastermind, they win cash. It’s a pretty fun show, and again, that’s 4:00 PM on GSN.

What’s the schedule for the show?

Excellent. I thought after Jeopardy!, it’d be the last time we’d see you on TV for a while.

K: I’m retired as a Jeopardy! contestant, but this is a side project for me to prove that my brains aren’t turning to jelly, I guess.

Is that definite? You’re not going to come back to Jeopardy!? Or maybe, down the road, if there’s an opportunity, is that something you’d consider?

K: Oh, I love the show, but I don’t think I can compete anymore. I mean, first of all, it’d be hard to top the GOAT tournament that was so much fun. But also, as I say, I’m a little past my prime. I better not be one of those players that stays on too long.

R: Maybe a little later you can be in the special Silver Fox edition?

K: Yeah, when are they gonna have the senior citizens tournament again? I’ll come on, for sure.

We’d like to thank Mr. Jennings and Mr. Garfield for their time and wish them luck in their future endeavors!