LEGO Strikes Back: Rise of Wokeism 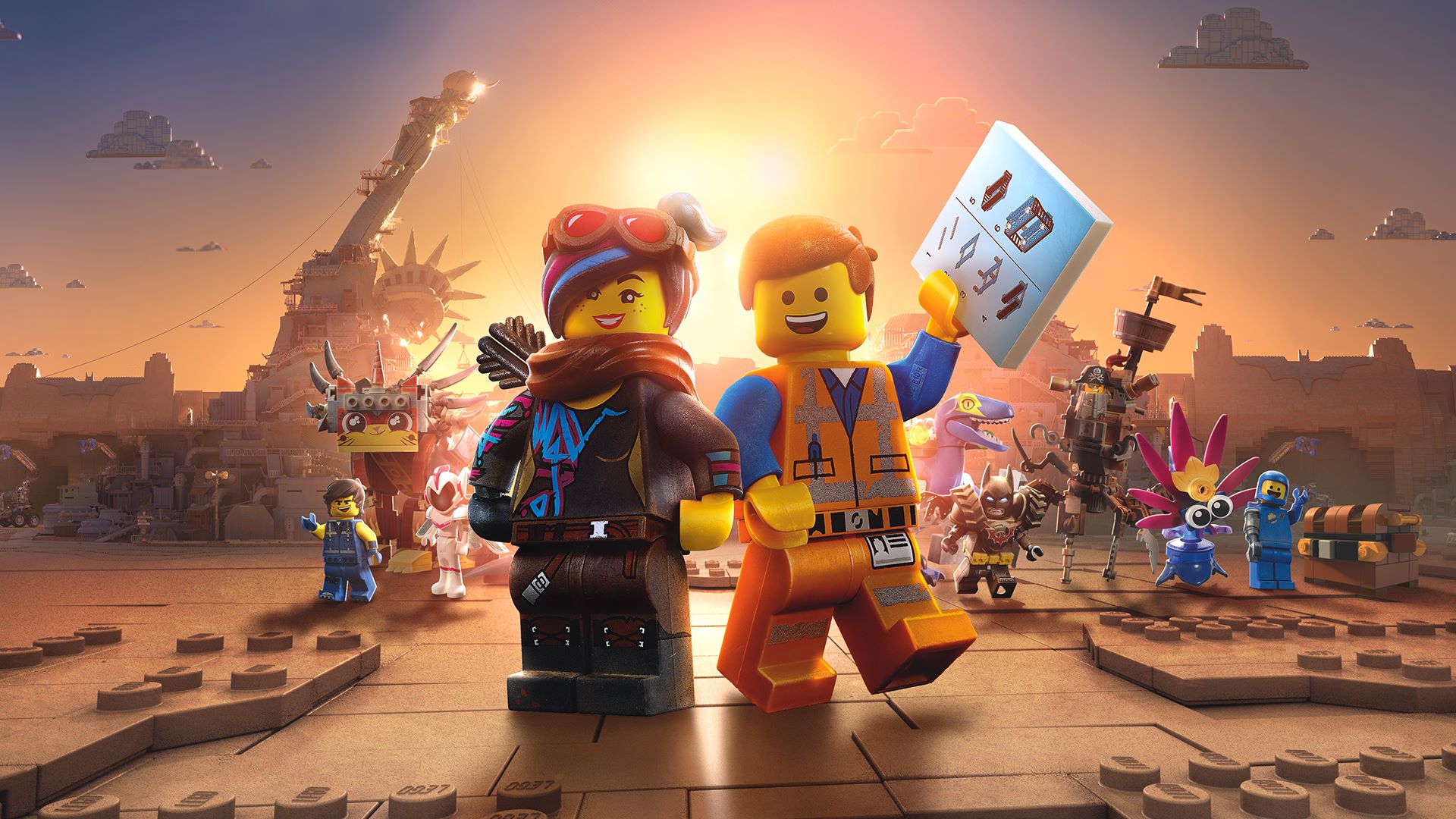 It’s February, which means all companies are talking about Black History Month. I’m not sure why, but I always thought of LEGO bricks as just bricks, with nothing to do with race or culture. They were simply bricks that anyone of all ages could play with and create something beautiful.

Apparently, I am wrong.

Since the 2020 riots in the USA, LEGO has been increasingly creating non-LEGO-related posts, thus joining the woke crowd. They’ve even added those catchy buzzwords, like “diversity,” “inclusion,” “equity,” and “equality” in either their posts or stories. Please note that LEGO’s stories are not listed below, as they disappear every twenty-four hours.

On June 3rd, 2020, after the death of Geroge Floyd, LEGO posted that they would donate four million dollars to “support black children and educating all children about racial equality.” 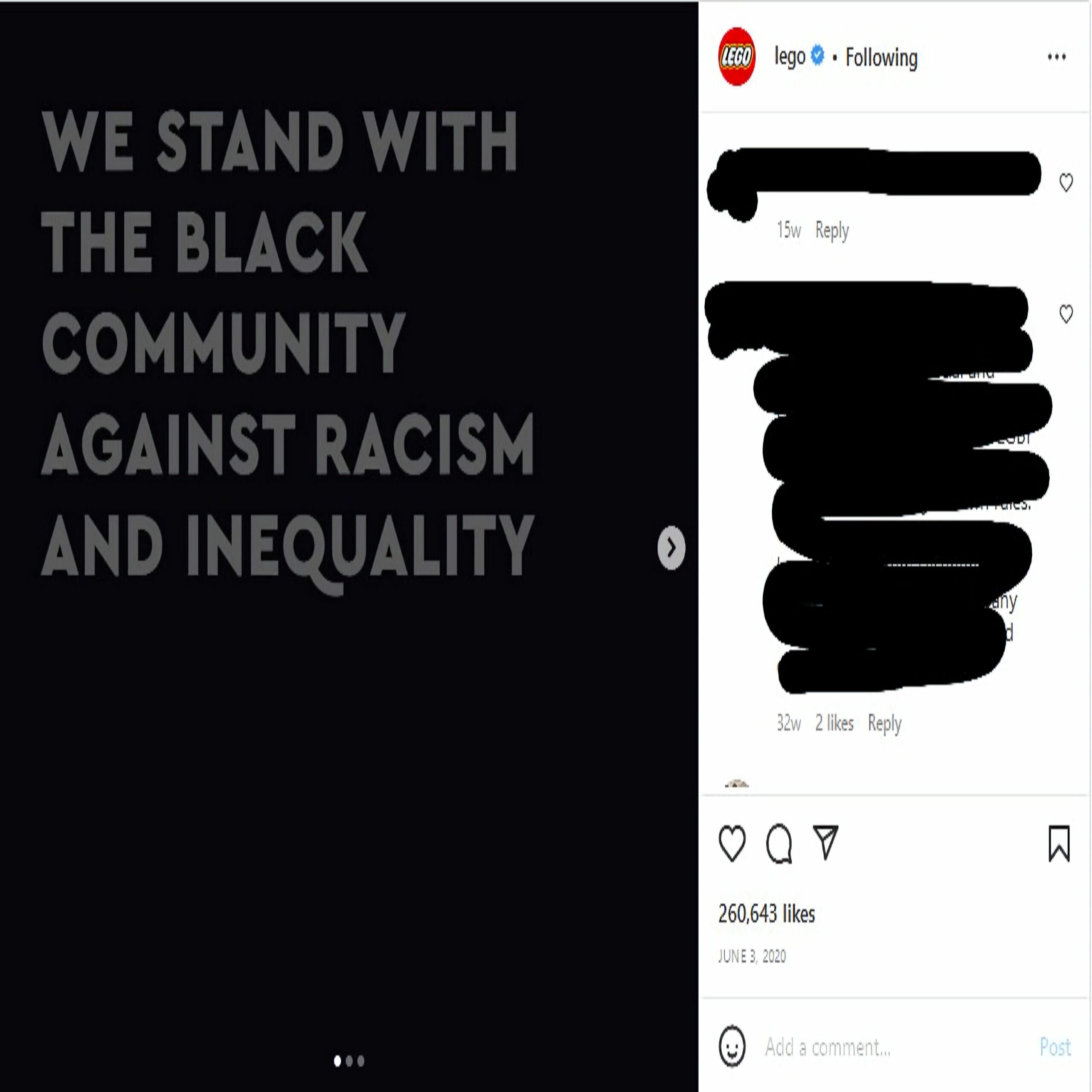 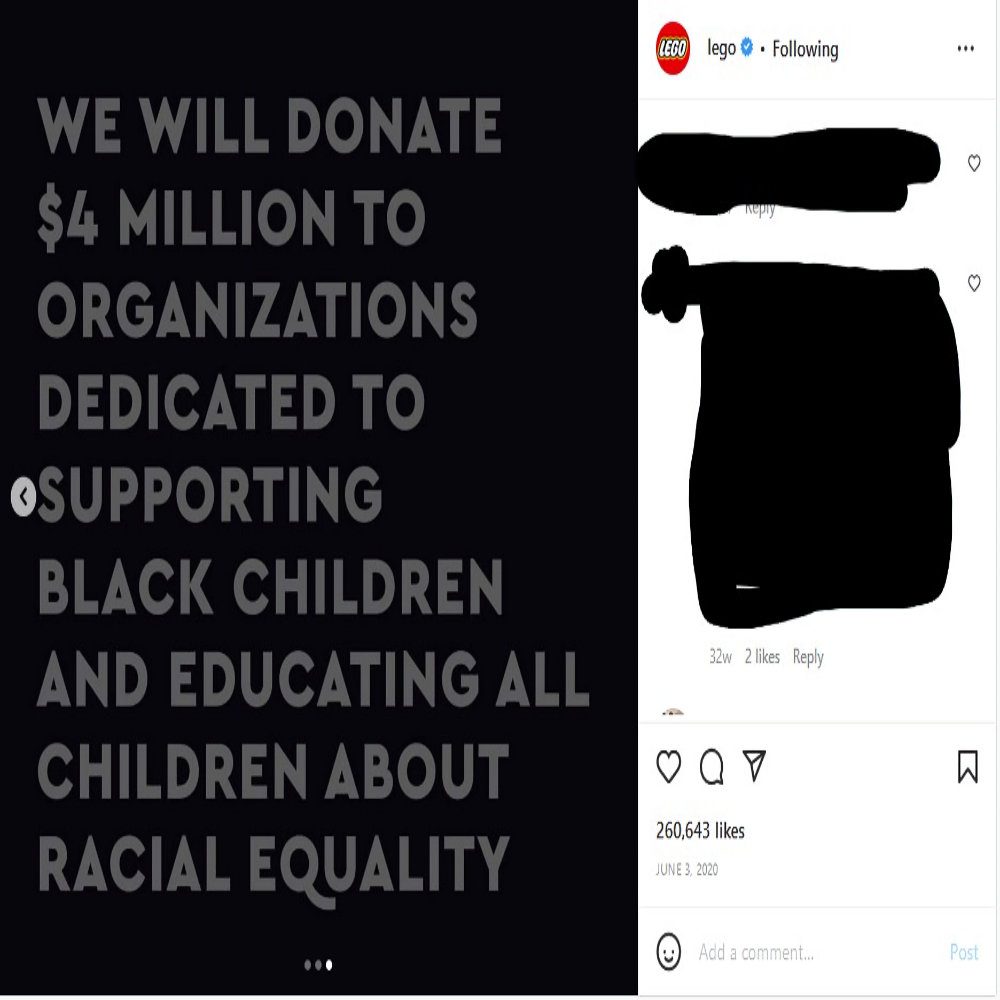 On June 27th, 2020, LEGO posted, “Love is love – no matter how you build it. Happy #PrideMonth to all of our incredible LGBTQ+ families and builders across the globe. You are AWESOME!”

Surprisingly, there aren’t any Black History Month posts for 2021. There might have been a story, but as it only lasts 24 hours, there is no way of knowing.

On March 30th, 2021, LEGO made a post celebrating diversity in Accra. The video only shows black people in it because Accra is located in Ghana, where the overwhelming majority of people are black. What is diverse about one race? If LEGO was to replace this video with an all-white video, what would be the reaction? If it is okay for one race, it should be okay for all races, right? 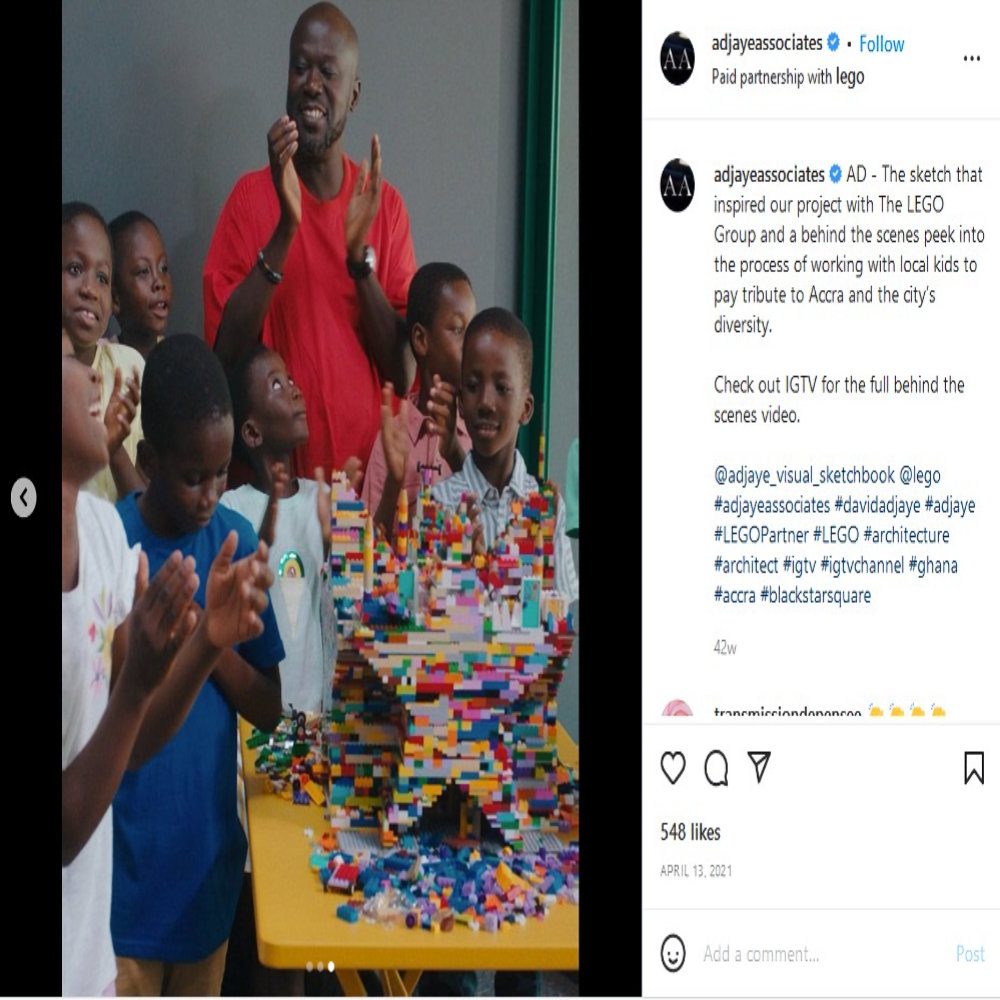 On May 29th, 2021, LEGO announced their LGBTQIA set, “Everyone is Awesome.” Now, this isn’t surprising, as LEGO usually posts about their upcoming sets. But why create a pride set? Who cares about LEGO minifigures being gay or trans? They are just plastic! LEGO bricks should appeal to everyone, not just a specific group of people. For a company that solely creates children’s toys, they sure talk a lot about LGBT+ and diversity.

Following the announcement of the new LGBT+ set, many “fans” flocked to social media to complain about how the set being marked as “18+” was “not awesome.” LEGO sets have age recommendations based on the number of pieces. The more pieces in a set, the higher the age recommendation. The “Everyone Is Awesome” set is only 346 pieces. For example, the LEGO set “Police Chase at the Bank” has 916 pieces, with an age recommendation of “7+.” LEGO states that the age recommendation for the LGBT+ set is “18+” because it was intended to be a display model for adults, hence its packaging design. The backlash was that younger LGBT+ people might have wanted it. A counter to this is, just buy the set if you want it! You don’t need to show ID to buy a set that doesn’t meet your age requirement! Last I checked, LEGO sets weren’t equivalent to lottery tickets and alcohol.

Now the question is, of all these “fans” who complained about the age recommendation, how many people actually bought the set? Or were they simply being Twitter activists for the sake of it?

Furthermore, on June 10th, 2021, LEGO made a post celebrating Pride Month. They had asked fans “to build something that shows what Pride means to them.” Fans sent LEGO photos of their creations. Why is this necessary? One Instagram user replied to the post with, “Oh, finally, a comment section where people can express their feelings about the way people have sex being promoted over children’s toys.”

In October of 2021, LEGO put out a statement: “Girls are ready to overcome gender norms but society continues to enforce biases that hamper their creative potential.” As a woman, I was shocked to find that other women actually believe that they can’t enjoy certain LEGO sets because they were created in mind for boys. My sister and I grew up on LEGO Star Wars. We didn’t care that we weren’t the target audience; it was just LEGO, and we had fun with it! Not to mention this is LEGO victimizing women where we don’t need to be victimized! Nothing is “off-limits” to females. Just because it wasn’t marketed towards you doesn’t mean you can’t do what you like! The very same goes for boys and men. If you want to build a princess LEGO set, you go right ahead! Lastly, Lego created another pride post. On November 15th, 2021, LEGO showcased fans displaying their “Everyone is Awesome” set with the hashtags of #LGBTQ.

LEGO even made a post about poet and activist Amanda Gorman and how she was such an inspiration, yet it has since been deleted.

Moving onto the current year, on February 1st, 2022, LEGO created a post about how a man uses “Afrofuturistic art style to inspire young creators and Rebuild the World.” Afrofuturism is “the reframing and reimagining of the past, present, and future through a global black lens.”

Why is this a thing? All this is doing is increasing division. Again, if you changed it to “reframing and reimagining of the past, present, and future through a global white lens,” would that be acceptable in today’s society? Would there not be an outburst of outraged activists? How is this progressive?

Now that I’ve thoroughly dissected LEGO’s wokeness, I would like to praise them as well. Back in August of 2021, there was a humanitarian crisis occurring in Haiti and Afghanistan. LEGO posted that they will donate to “UNICEF and UNHCR – UN Refugee Agency, and Education Cannot Wait.” 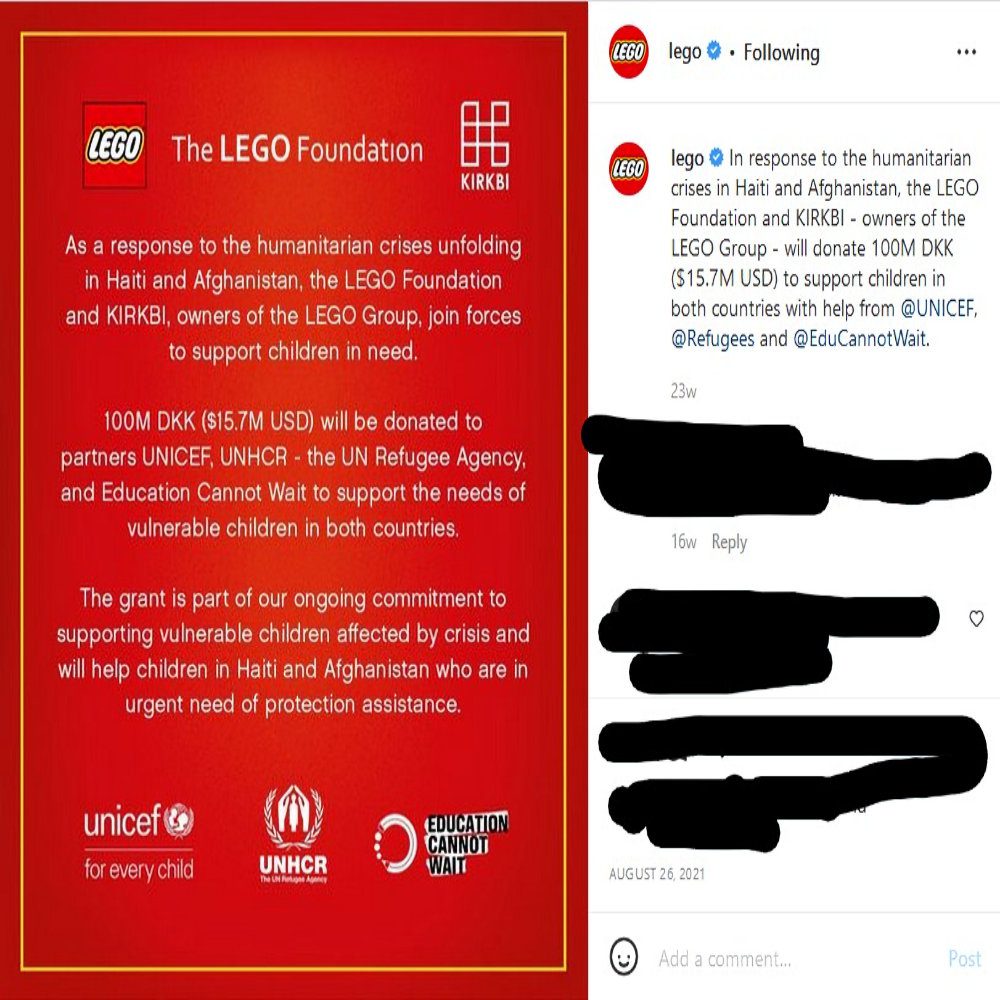 Additionally, LEGO is helping people of all colors and creeds living in Germany. On November 23rd, 2021, LEGO posted that they would “donate 7.1 million Danish Kroner (960,000 Euros) to the German Red Cross. The funding will support the reconstruction of kindergartens and the building of a family aid center.” This was a response to the flooding in North Rhine-Westphalia, Germany. 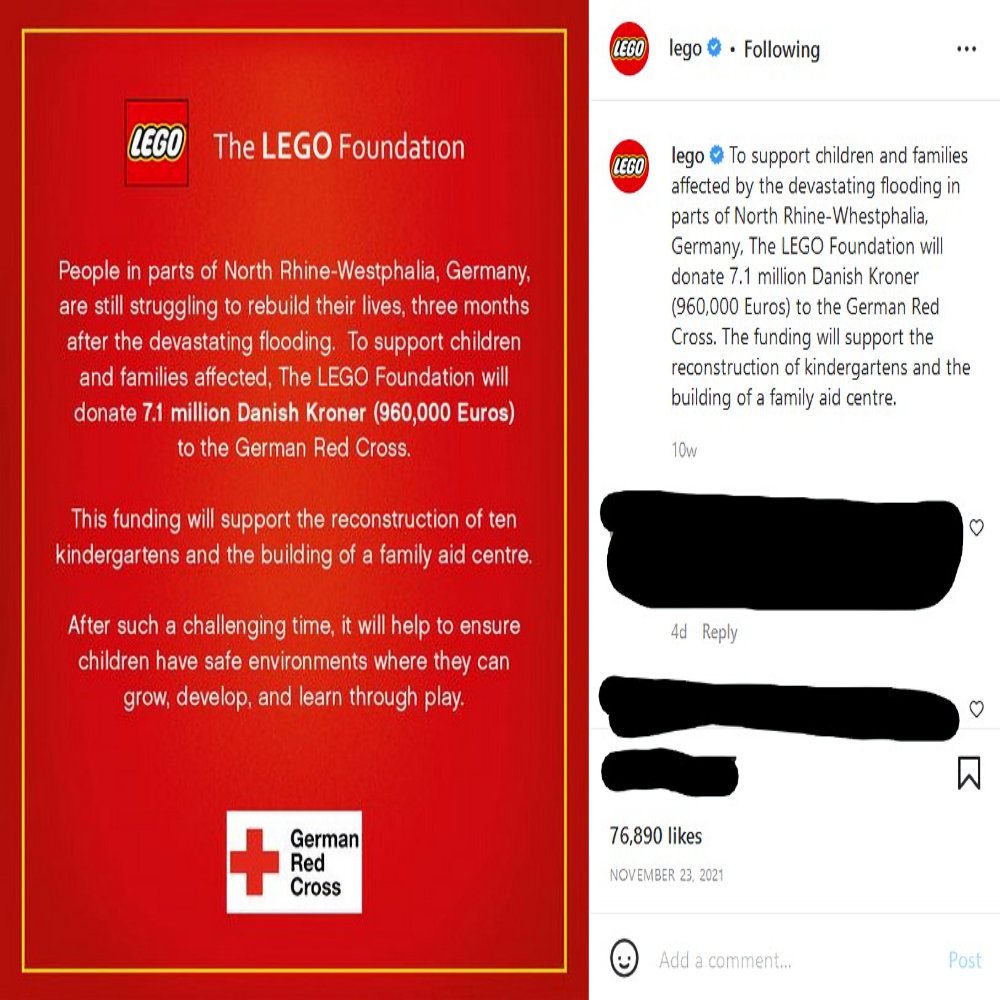 At the end of the day, LEGO is a company that creates toys for children. They should not make any political statements or cater to any ideologies except that of creating bricks for all children all over the world.