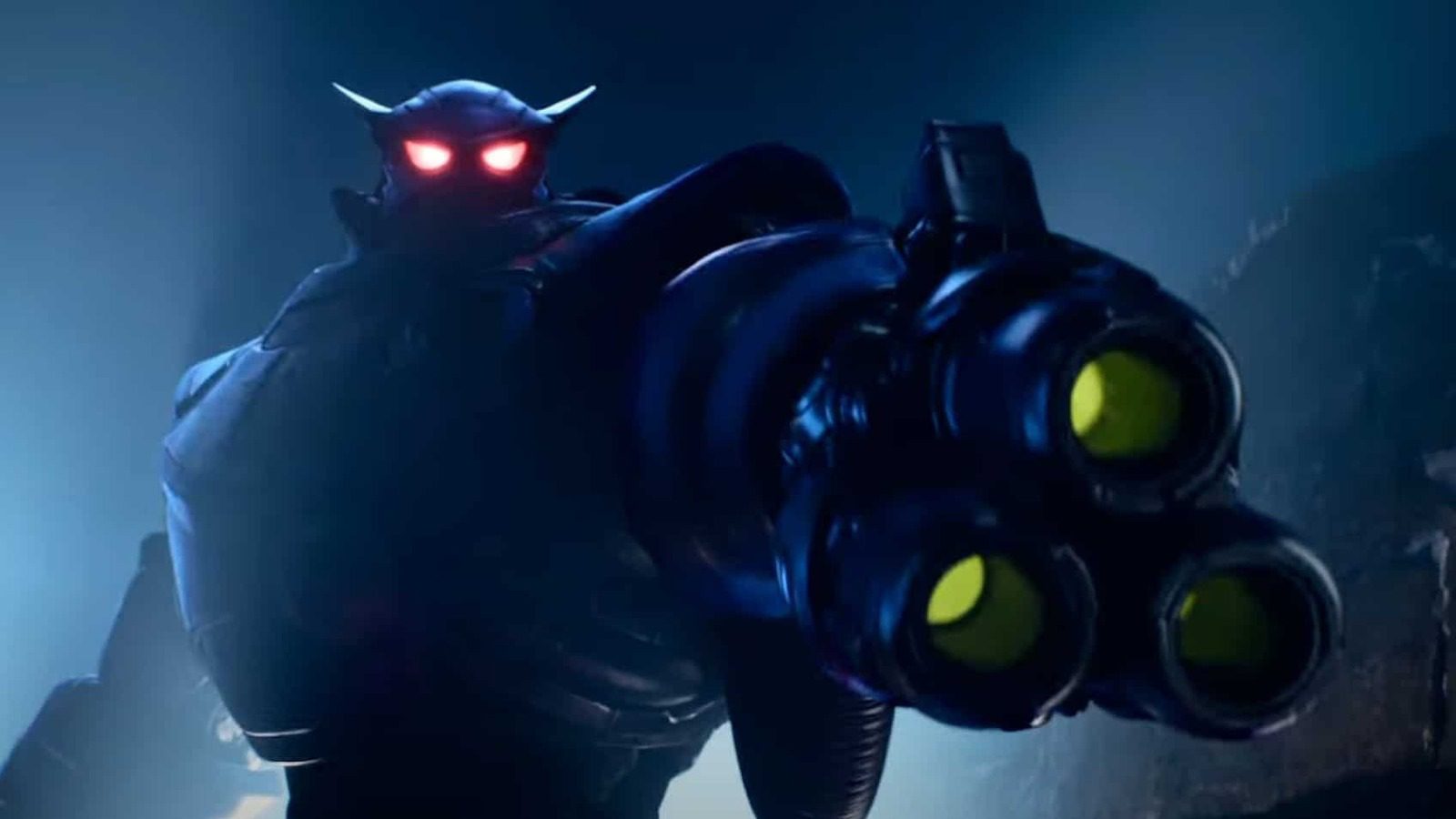 I was pleasantly surprised with Pixar’s Lightyear, an unnecessary prequel/spin-off/toy commercial that I was dreading. It’s not a perfect movie, but I ultimately enjoyed the respect it pays to its characters’ emotions and dilemmas. My sci-fi nerd husband liked it even more. I have no problem with gay couples, real or fictional, and having seen the movie, I see why they didn’t cast Tim Allen. If Disney were “canceling” Allen, he wouldn’t be starring in their upcoming Santa Clause series. Also, I don’t think of him as a compelling dramatic actor, and Lightyear isn’t a comedy. Regardless of all the Toy Story nostalgia, I imagine Chris Evans was cast for his more dramatic presence. I say this not to defend Disney/Pixar but in the interest of fairness; I’m also tired of hearing people complain about this. It’s a moot point. I wouldn’t call Lightyear one of Pixar’s better or bolder efforts, and I had my gripes with it. I talked about the thin character relationships and mixed-bag execution of themes in my review, but now I can get into spoiler territory to illustrate my biggest issue with the film.

I’m coming into Lightyear as a life-long Toy Story fan; I had all of the toys growing up, except for Bo Peep. She was a nightmare to find, and my whole family searched every Walmart and Toys R Us for her. Toy Story was my first favorite movie, and I used to call my Woody doll my boyfriend. I was so excited to see Toy Story 2 and begged my mom to take me; it’s the first theatrical experience I can remember. I like Toy Story 3 but not as much as most people, and I consider it very derivative of ideas 2 did better. Toy Story 4 is the bane of my existence and one of few movies I wish I could un-watch. It is an insult to the franchise’s established characters and themes and overwrites what many considered the perfect ending. I only say this to illustrate the long, complicated history I have with this franchise. This brings me to my biggest problem with the film, specifically the portrayal of a classic Toy Story character. And it’s not Buzz; I understand humanizing him as the center of the story as opposed to the comedic foil he serves as in the series proper. Heck, you could barely call Buzz a character in the third and fourth films. As I said, I don’t mind Chris Evans taking on the role; he’s good, and nobody seemed to mind Patrick Warburton (who I adore) playing Buzz in Buzz Lightyear of Star Command. I take umbrage with the movie’s portrayal of Zurg both in concept and execution. Let’s take a look. 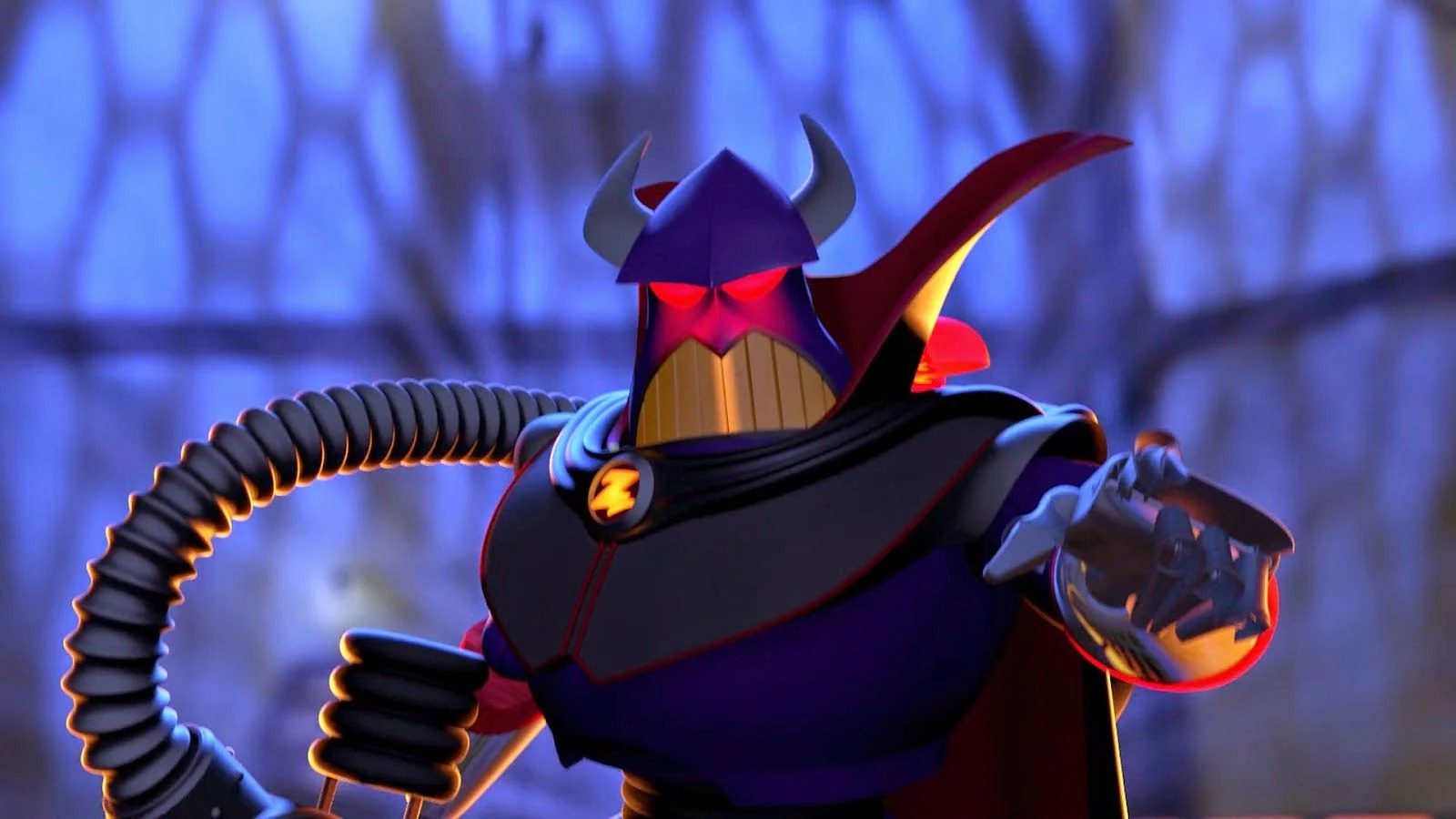 Toy Story 2 is where Zurg first appears. This movie is rightfully known as Pixar’s first real attempt at drama and pathos. Jessie’s backstory set to Sarah McLachlan singing “When Somebody Loved Me” makes me cry to this day. Woody’s character arc in this installment is pure cinematic magic, and it’s precisely why I have my biggest problems with 3 and 4. But what people often neglect is how funny Toy Story 2 is. Many of us were like Andy or Sid as kids but grew into Al, the toy collector. And do you know what? That’s funny! I love it when Al drives across the street from his house to his store, bemoaning that he has to “drive all the way to work! On a SATURDAY!” Wayne Knight breathed memorable, memeable life into Al and would go on to voice Evil Emperor Zurg in Buzz Lightyear of Star Command. 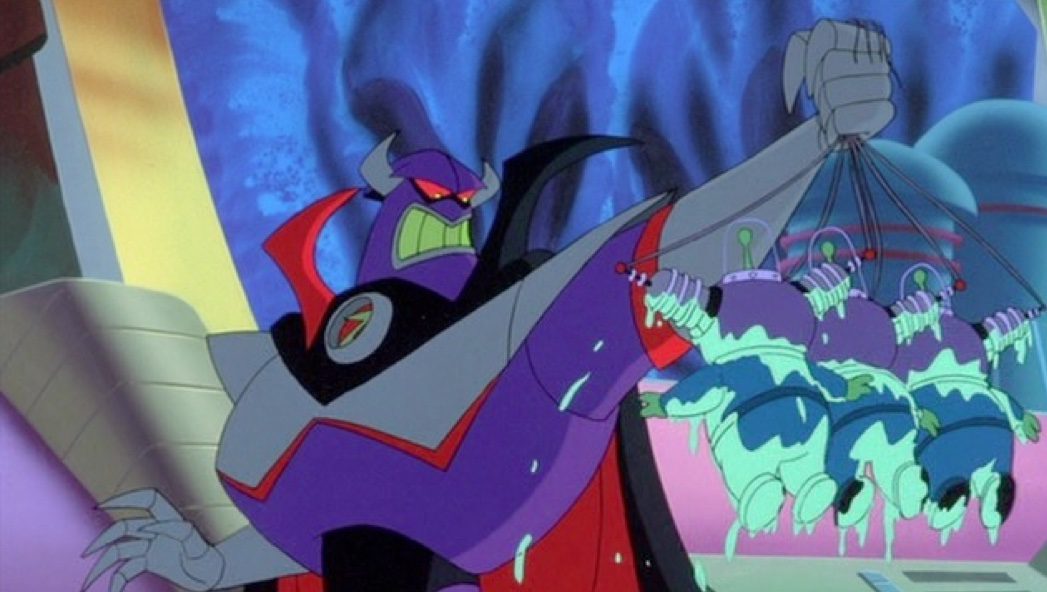 Along with Al and some supporting toys, Zurg is a comedic highlight of Toy Story 2. He brings much-needed levity to Buzz’s subplot, as Woody’s is grounded, deep, and existential. When your A plot is about our mortality and whether it’s better to have loved and lost, maybe focusing the B plot on a psychotic action figure on a murderous rampage makes perfect sense. This is the kind of cartoony nonsense that 3 and 4 forgot about, too busy getting lost in sap or undoing the previous movies, respectively. Buzz Lightyear of Star Command, Disney’s spin-off movie and tie-in Saturday morning cartoon, were staples of my childhood. I even ate the Buzz Lightyear soup, which was awful, by the way– as is the series, as I’ve discovered in subsequent years. But to the show’s credit, it always had a sense of humor about it. Knight’s take on Zurg presents a real threat to Buzz and his comrades, but he’s also fun. The show also continues the gag from Toy Story 2 about Zurg being Buzz’s father, to which Lightyear briefly alludes. Strange how a Star Wars reference became an inside joke in another franchise, and such a disjointed one. Zurg only gets a cameo in Toy Story 3 and isn’t even mentioned in 4. My first problem with Zurg’s appearance in Lightyear, put bluntly, is that he’s boring and not funny at all. This movie is more serious than the main Toy Story films, but having this character bring some humor wouldn’t have hampered that and would have made the movie more fun. 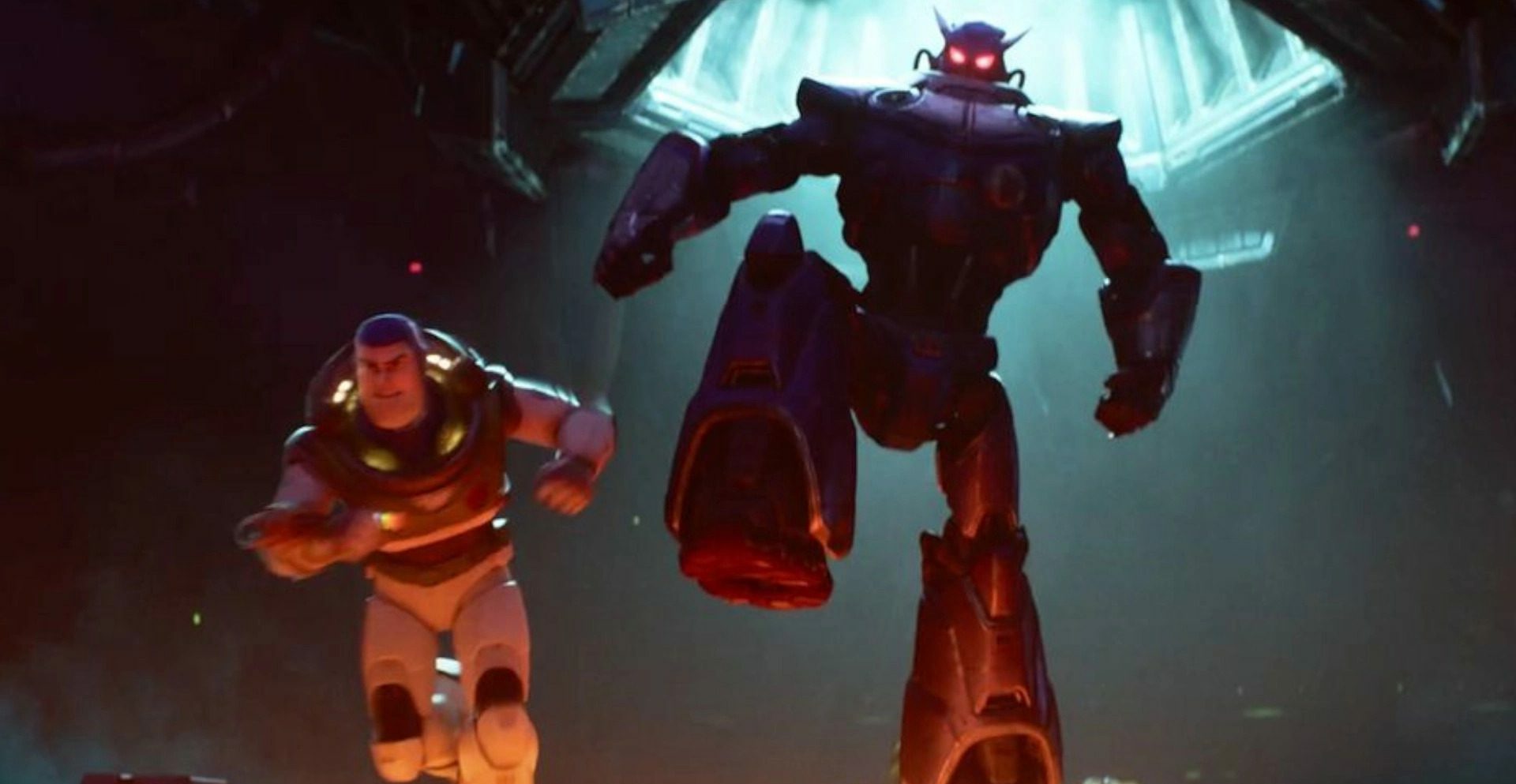 Next on the list is Zurg’s lack of overall presence. We don’t see him until a decent way into the film, which is a problem since he’s the sole antagonist. Once we meet Zurg, in addition to being boring and losing his Emperor title (seriously, where did that go? Why is the toy an Emperor, then?), he has no charisma. This character isn’t scary or intimidating at all, especially once he’s unmasked. We’ll come back to address that in a moment. If they wanted to abandon the character’s somewhat campy roots in animation, they needed to replace it with something. If Zurg isn’t going to serve as a comic relief character or an homage to classic sci-fi and fantasy villain tropes, he needs to represent something else. Make him scary or calculating or something. We learn nothing about Zurg until it’s almost too late, and what we discover is ridiculous and by no means fills the void left by Zurg Classic. By the way, Disney and Pixar totally ignore the Star Command show and premiere movie entirely these days. I can understand that; the film was a DTV release, and the show was excruciatingly campy and poorly written. Despite some of the attached talent, it’s not a high point for Toy Story or Disney/Pixar in general. But Lightyear, Pixar’s first big theatrical release since 2020, has a similar premise to the show, making it somewhat suspicious. Just an observation.

And this brings me to my final point, and my personal least favorite aspect of Lightyear: the Zurg reveal. This is where the real spoilers lie, in case you’ve somehow read this far while trying to avoid them. Zurg shows Buzz his unmasked visage, which is his own much older face. This shot pulls double duty, both explaining the “I am your father” thing (which didn’t need explaining) and introducing the multiverse concept. That’s right; Lightyear is another movie containing multiple versions of a character. Zurg is a version of Buzz who never learned the value of life and never moved on from his mistakes. He still obsesses over getting everyone back to Earth millennia later, thanks to the time discrepancy when he surpasses light speed. I’ve heard of being your own worst enemy, but this is just too much. This is dumb. I think this idea came from the desire to make the conflict personal and force Buzz to confront his wrong beliefs head-on. That’s noble, but this is a cheesy and unconvincing way of doing it. If you’ve read a couple of my pieces, you’re probably tired of hearing about The Incredibles. But I will have to mention it again because this is another idea that it knocks out of the park, unlike Lightyear. Bob Parr/Mr. Incredible is also the source of many of his own problems, though not all of them, of course. He’s arrogant, selfish, and feels entitled to continue crime-fighting regardless of the laws and how this would harm his family – and already has. The entire story is set into motion due to his hubris and self-importance. But instead of facing an older, lonelier version of himself, Bob has to face the direct result of his actions: Syndrome. It would be unfair to blame 100% of Syndrome’s murderous actions on Mr. Incredible unwittingly offending someone who essentially stalks him. But I think it would be fair to say he could have handled the situation better, as with many other obstacles he encounters in the film’s first half. Having characters fight themselves feels a bit prosaic and literal for my tastes. James Brolin is fine in the role, but older Buzz is also boring, as I’ve mentioned, and isn’t very memorable. His portrayal stands in stark contrast to previous iterations of the character, as well as a villain like Syndrome. If your hero comes face-to-face with their past mistakes or erroneous worldview, it should be through the results of their actions, not another version of themselves.

I enjoyed Lightyear as a movie more than I expected, though its connections to the larger Toy Story franchise remain tenuous at best beyond surface-level references. I maintain that Zurg is the worst part of the movie regardless of James Brolin’s serviceable line readings. Even then, what can he do? This character is given some of the movie’s most stale dialogue. I’m surprised there isn’t more discourse around Zurg, given Disney and Pixar’s recent trend with plot-twist villains. I just hope this is the last Toy Story movie, regardless of the ridiculous post-credits scene showing Zurg survived; let this franchise rest at last.