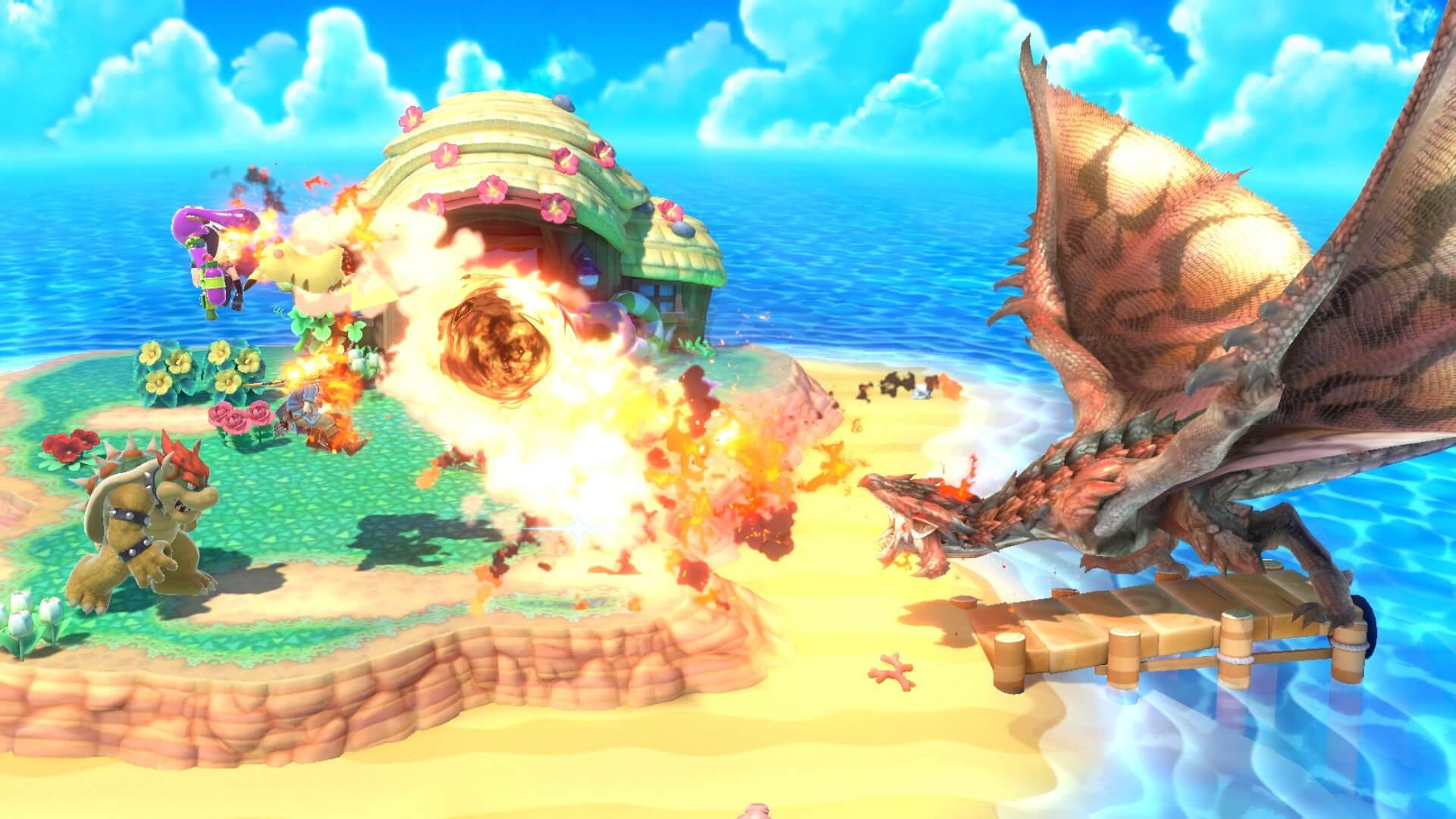 Super Smash Bros. fans were welcomed this morning by more than just clear summer skies, as Nintendo’s promised Super Smash Bros. Ultimate Direct streamed at 7 a.m. PT/10 a.m. ET. New details about the game were in no short supply and the live stream went on for nearly half an hour. Many of the highly anticipated brawlers’ new items, stages, characters and more were on full display, and while viewers may have been initially met by the morning sun, they were soon captivated by the moon as the dedicated Smash Direct started things off with revealing the long-awaited entry of the Castlevania franchise into the game’s collaborative roster with the introduction of Simon Belmont. The legendary vampire hunter sports an updated look from his side-scrolling days but comes complete with his long-range Holy Whip chain weapon and many recognizable special attacks such as a throwing Axe, Holy Water, and shuriken-like Cross, as well as an enemy-launching uppercut. The character’s Final Smash attack is called Grand Cross, in which an opponent is encased within a giant coffin that is bound by chains before being flung off of the stage. The Castlevania love didn’t end there, and Simon Belmont’s descendant, Richter was also revealed as a playable “echo fighter” for the vampire hunter, mimicking the former’s move set. Dracula’s Castle is also a new stage, in keeping with the symphony of franchise additions. In this stage, tonally the darkest in the history of the Smash Bros. series, various boss monsters from Castlevania will make appearances, including none other than the vampire lord Dracula himself, causing havoc for players. Rounding out the Konami fan-favorite is the introduction of the son of Dracula, Alucard, as a new Assist Trophy, and Death’s Scythe as a new weapon for players to send their opponents to an off-stage grave! Fans of Castlevania laud the series for its soundtrack and Masahiro Sakurai and his Super Smash Bros. Ultimate Team will not disappoint them, adding in 34 new tracks from across the franchise’s history. 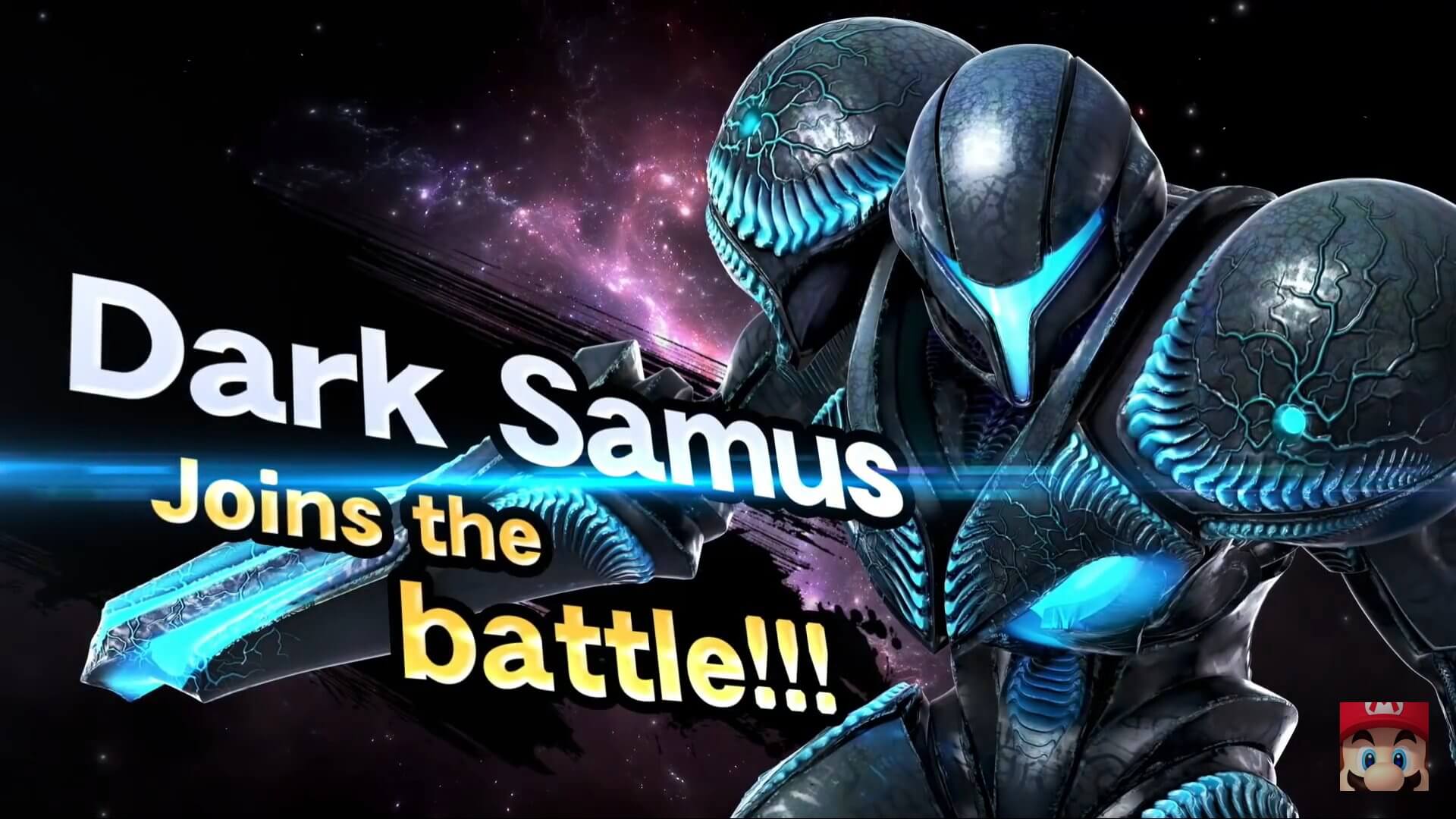 More of the Super Smash Bros. series’ characters received echo fighter announcements as well. Dark Samus from Metroid Prime 3: Corruption will make an appearance in the game this December, with a move-set that mimics her heroine counterpart, and Chrom from Fire Emblem: Awakening, who mirrors fellow Fire Emblem favorite Roy. Also announced was the option to display all echo fighters in either sub-boxes within each character window on the select screen, or to have them listed within their own, entirely separate window alongside every other playable fighter. Sakurai also teased that every character will be revealed before the game’s release in December. A wealth of stages from previous entries in the series will make their return. Many series staples such as the Pokémon Stadium, Brinstar Depths, Kongo Jungle, Dream Land, and the Ice Climbers’ Summit stage will be returning, as well as the must-have for competitive Smash enthusiasts, Final Destination. New stages to the franchise include the Unova Pokémon League, New Donk City Hall from Super Mario Odessy, which features Paulina singing the game’s jazzy theme song, and Magicant from Earthbound. Sakurai assured that classic N64 Smash stages will retain their look and feel, apart from the necessary HD enhancements, and that all returning stages from previous Smash Bros. games were given slight tweaks to ensure that they were properly balanced for the roster of characters available in Super Smash Bros. Ultimate.

Ultimate boasts the largest stage count in franchise history (by no small margin) at a whopping 103, but that doesn’t take into consideration the fact that every single stage also possesses an additional Battlefield and Omega variant, as well as the ability to turn stage hazards on or off. The possibilities may not be literally endless, but that’s sure not for a lack of trying! Every stage comes ready to play upon launch, no unlocking required, so players will be able to Smash-it-up with their friends and rivals wherever they prefer right from the start. A bit of a nostalgic nod to note is that the Super Smash Bros. Ultimate team lists both the characters and stages in the order that they first appeared within the franchise on their respective select screens, chronicling the game’s history. Additionally, with regards to stages, a new surprise was added into the game: Stage Morph. By turning the Stage Morph option on, the current stage will literally transform into another stage at either set intervals or entirely at random during a match! Lastly (or rather, firstly), another alteration to stages, Stage Select, will take place before participating players choose their characters. Sakurai’s Super Smash Bros. Ultimate Team is reportedly made up of a bunch of audiophiles, and the number of musical options in this latest Smash title is a testament to just that. My Music returns, allowing players to customize the tracks that play while on a given stage; however, instead of choosing from a small pre-set of tracks, any musical track from a stage’s respective series can be played. The track count for this game is astronomical, totaling 900 (how many discs is this soundtrack going to be?)! A gimmicky new feature is the ability to create playlists with the various tracks within the game to take on the go. While this feature is a nifty little addition, it is unlikely that people will be carrying their Switch around like a bulky music device (my old Sony Walkman takes up less space, and the Switch’s speakers aren’t nearly good enough to be used as a boombox). Anyone interested in a sampling of the game’s soundtrack can find a selection of tracks on the official Super Smash Bros. Ultimate website which will update weekly with new tracks to sample. 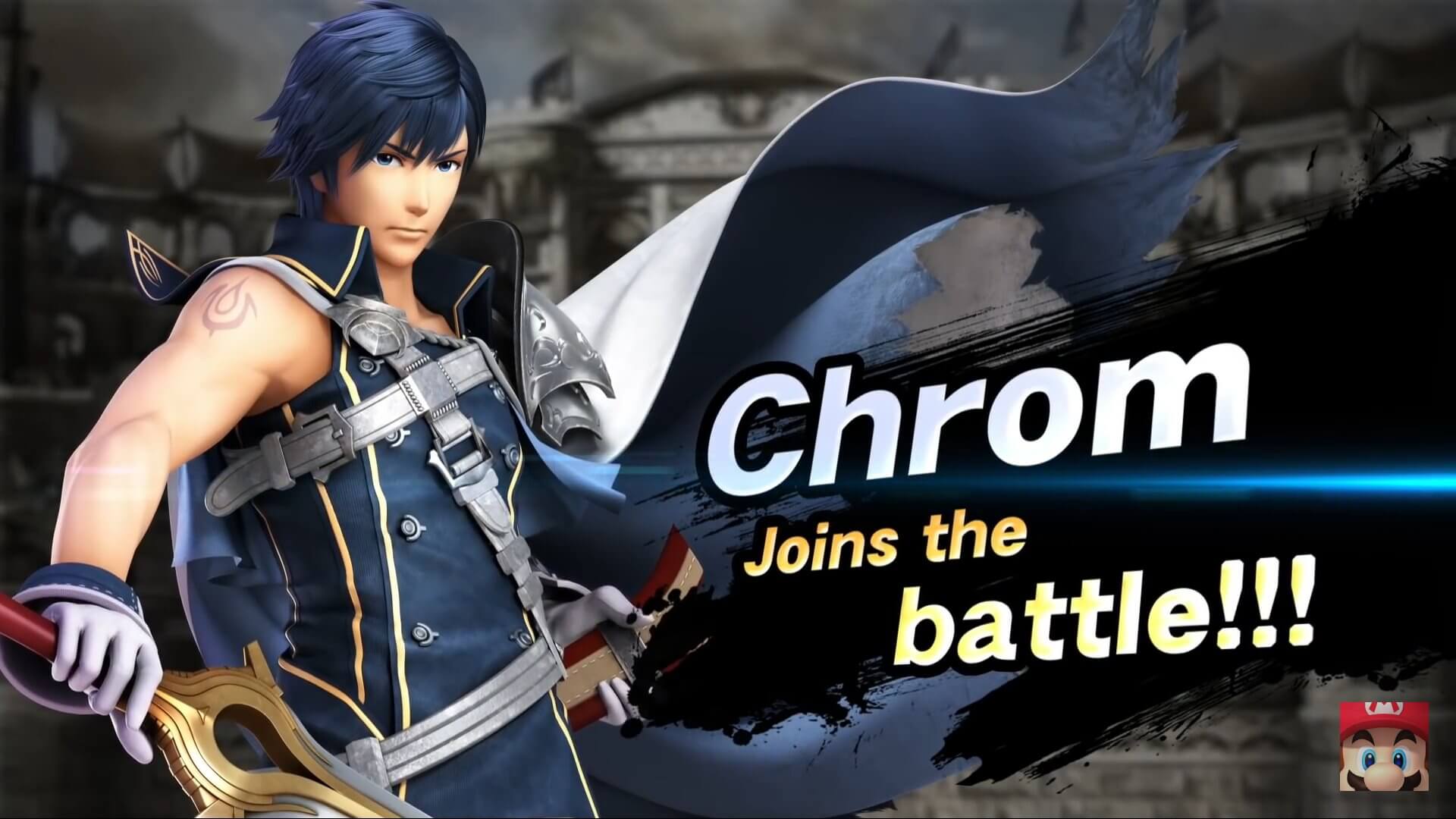 Players can create their own rule-sets to quickly select from at any time. The standard Smash Bros. rules are all present – Stock and Time – however, new to the set of standard regulations is the nail-biting Stamina mode in which fighters must reduce their opponents’ health down from 100% to 0% to win. The strategies employed in other traditional Smash rules don’t always make for a great success recipe, so players must become more crafty and methodical with their tactics. Another new option is who gets to select the stage for the match, such as loser picks, winner picks, etc. Players who want an even faster-paced, higher-stress experience can participate in Sudden Death matches, in which they will begin the match with their damage count already at 300%, and the game’s stage camera will steadily zoom in closer, forcing players to get in each other’s faces. Also, there is now the option to turn on a new “Final Smash Meter” that allows players to build up and unleash their own Final Smash attack. These meter smashes will be less potent than those attained via Smash Ball, but will be devastating nonetheless and are sure to make for some flashy matches; no two Final Smash attacks can happen simultaneously, so whoever uses their meter first will be the one to have their attack go off accordingly. Additional new modes to the multiplayer include Squad Strike, a 3 vs. 3 or 5 vs. 5 brawl in which players will be pitted against one another in an elimination-style match, and Smashdown, where upon a match’s resolution, all previously selected fighters will be locked out, and new characters must be chosen. Training Mode has received an immense update in Super Smash Bros. Ultimate, with a new stage that features a grid-like background that graphs (remember algebra II?) the trajectory of your opponent when you hit them with a given attack, relative to their current damage percentage and character’s weight. This will allow hardcore players to more accurately predict where their opponents will land with regards to juggling combos, and will also assist more casual players to reach those higher levels of competition. The Nintendo 64 Smash Bros. single player mode makes a return as Classic Mode, allowing players to choose their character and fight through a series of preset battles. 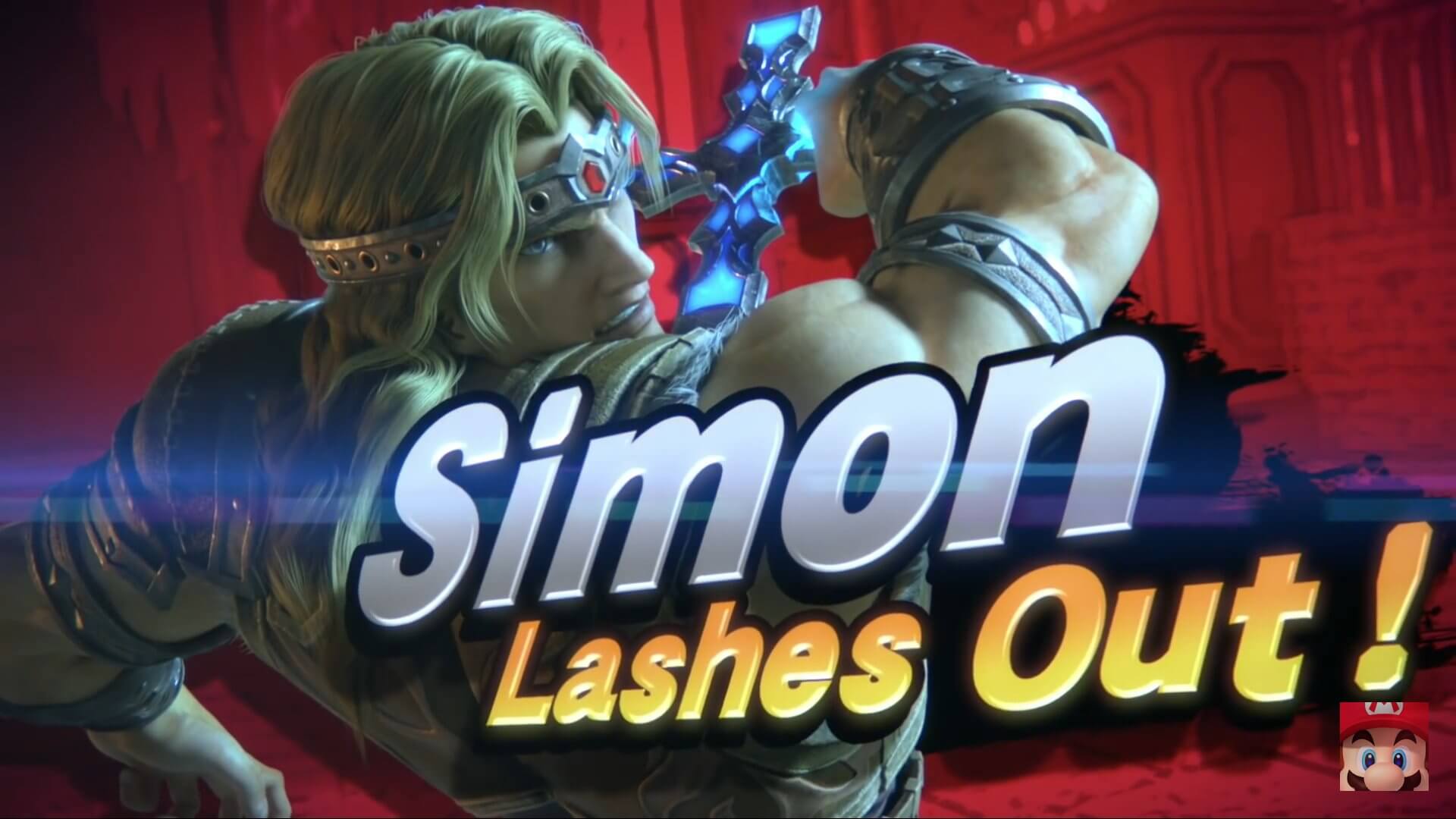 New items, Pokémon, and Assist Trophies were revealed en masse for Super Smash Bros. Ultimate. New items include: a Banana that fires an explosive bullet at the opponent and then can be left on the ground for players to trip on; the Killing Edge blade for knocking opponents around the map in stylish fashion; the Fat Boy-esque Bomber item that causes a massive explosion in a fair radius around the user; Death’s Scythe (mentioned above); an Evil Mushroom that functions similarly to the series regular flower item; and a Rage Blaster whose power increases with each successive use. PokeManiacs have a lot to be excited for as well, with the addition of many fan-favorites of old and newcomers from the Alolan Region of Sun and Moon. Alolan Exeggutor, Abra, Solgaleo, Lunala, Mimikyu, Marshadow, Pyukumuku, both the Kanto and Alolan forms of Vulpix, and Ditto all join the already massive list of Pokémon. Assist Trophies received a host of rookies as well with: Zero of Mega-Man X fame, Sonic’s friendly nemesis Knuckles, Star Fox’s girlfriend Krystal, the toothy Klaptrap, Animal Crossing’s resident bus driver Kapp’n, Kirby’s cooking extraordinaire Chef Kawasaki, Shovel Knight, a Nintendo Mii Nikki, Gray Fox of Metal Gear renown, and the world-ending Moon from The Legend of Zelda: Majora’s Mask. Another surprise guest as both an Assist Trophy as well as Stage Hazard is the Monster Hunter series mascot, the dreaded Rathalos! 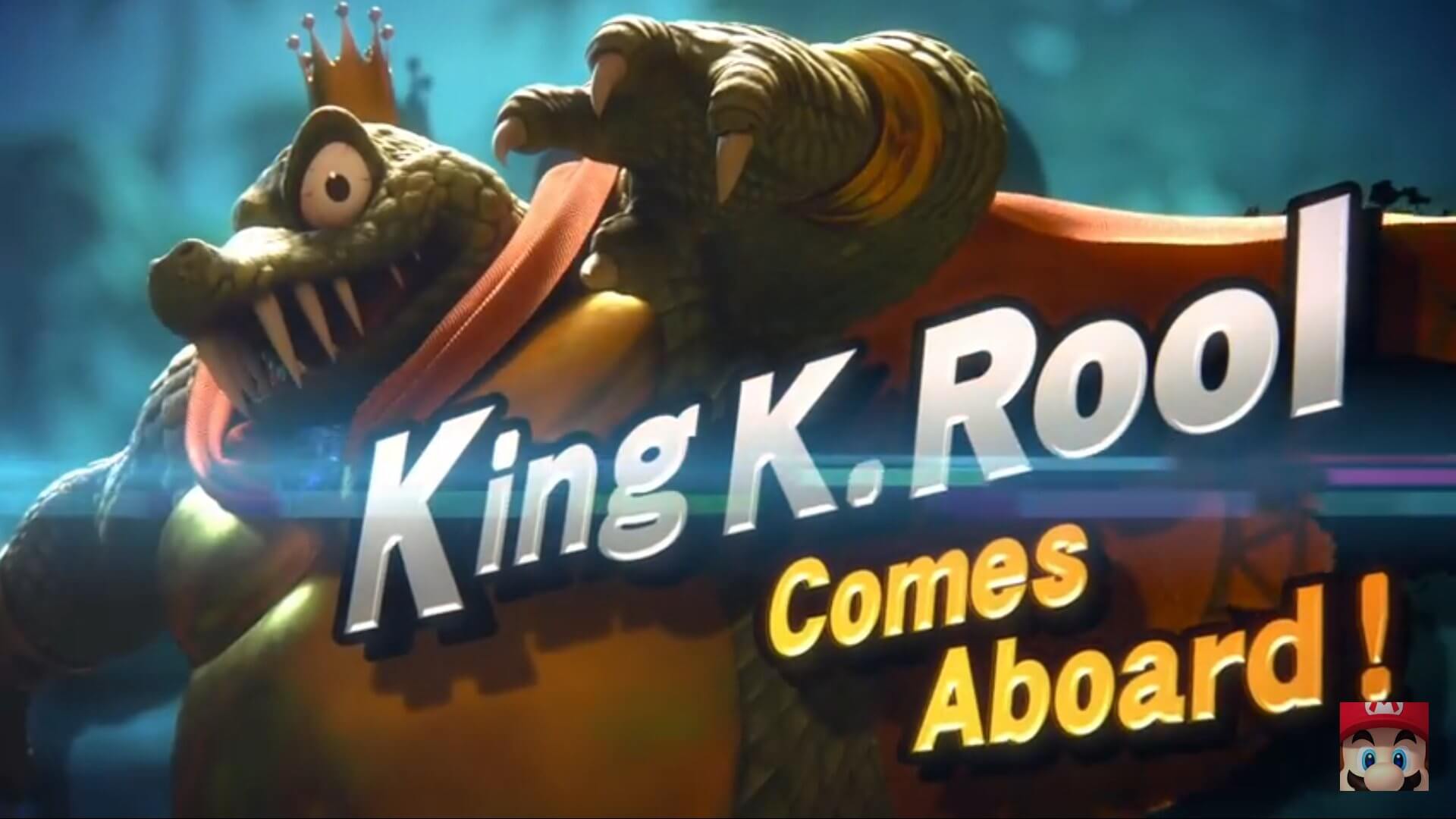 Masahiro Sakurai and the team at Nintendo did not disappoint with the wellspring of content they revealed about Super Smash Bros. Ultimate today, from the massive list of music tracks and stages to new modes and the ever-expanding roster of playable fighters – which, to end on that note, the Direct’s broadcast revealed the long-awaited addition of Donkey Kong’s archnemesis, King K. Rool, to the game’s roster, and they may have inadvertently exposed another character or Assist Trophy, Bomberman! With that said, we still have a lot to look forward to, as Sakurai already stated all characters will be revealed before launch. So here’s to me holding out hope for Bass, Shadow, and Rex! Let us know in the comments which new characters and echo fighters you want to see!