Diversity, racism in DnD, and all that woke 2020 nonsense in RPGs 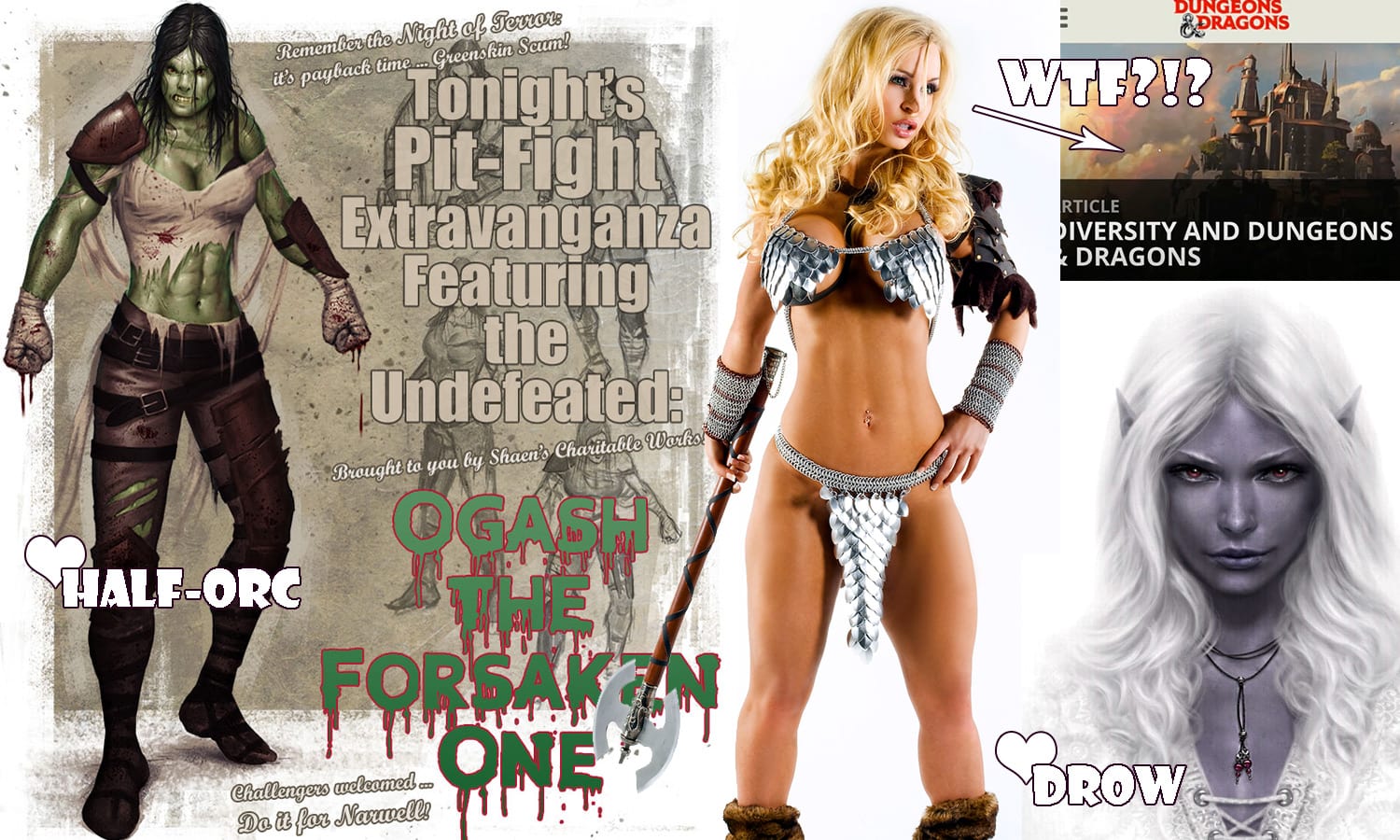 A girl’s RPG player’s opinion on the DnD is racist/Diversity recent nonsense concerning:

– ORCS (FYI most systems only allow Half-ORCs to be played, and Orcs are traditionally a race of green skinned evil humanoids, brutal, savage and bend on conquest/destruction).

ALL the gamer girls I know that played Half-ORCs or DROWs did it because they liked the race’s culture and backstory.

What girl wouldn’t like to play some fantasy of being a Drow?
A badass adventuress whose very name as Drow sends chills in people?

A girl player I know she loved her Half-Orc fighter.
The ‘evil’ nature of the race made her feel wicked awesome (as it should!).
She challenged the city’s underworld best pit fighter and won.
After, she seduced the city’s crime lord Shaen to get half the spoils.
In time she replaced him.
If that’s not women empowerment, I don’t know what is.

Side note: she even had POSTERs done and criers hired to build her name, using the local people’s fear and hatred of orcs to boost her rep (poster is in the pic above)
Now isn’t that the coolest ever?

RPG Gamer girls I played with and/or know: 95% like the raw uncut spicy nature of the game.

In a game that climaxed in the great underground Drow city of Erelhei-Cinlu, Mel’etana the Drow sorceress (pic above), after having endured the prejudice and mistrust of the upper world (kind of deserved but that’s another story! Giggle), finally returns to her noble house.

Welcomed home by her sister matrons of the Household, she is offered many males to serve her, many quite happy to have been given to such a beautiful and relatively (by Drow standards) non-wicked matriarch.
In ritualistic ceremony she is bathed naked before all in the purest mix of scented oils, exotic milk from drow silkworms and virgin blood (of an undisclosed nature).
Cleansed, the celebratory orgy can finally begin.
But trouble is afoot as the other players are soon victim of abuse by a sister of her family.
Mel’etana must make the difficult choice of helping them.
They did save her life on a few occasions in the sun-scorched upper world.
Also unbeknownst to the other players at that time, she was under a mission of revenge in Lolth’s name and needed them alive to accomplish that all-important life quest.

And no I wasn’t playing Mel’etana.
It’s this nice girl who has a computer 9 to 5 job, monogamous relationship, and very healthy values in her day to day life. The kind of girl that wouldn’t hurt a fly.
It’s escapism.
It’s fantasy.
Get over it.

Thank you for being another voice in all of this Jenny. I get really upset watching all of this woke non sense trying to seep into our games to try to suck all of the fun right out of it.
As you know I come from a community who get wrongly put into the groups of these assholes pushing this non sense. All my gay friends are afraid to even speak up to out of fear of being exiled or shamed.
This is a very small group of puritans who simply want control. They will go out of their way to gain this power by pretending they want to be a part of our community.
Everyone has always been welcomed at my table. They have been doing their best to gas lite and call us names for simply trying to keep the essence of what this game is all about.

Yes there is lots of stuff that isn’t woke about this game. To me that is what makes it fun.
Elves and Dwarfs have never gotten along as a group of people. We can express fantasy racsim and fantasy slavery without saying, “Hey I support this in real life.”

I could go on and on and on about this. So I will end it here with a BIG thank you.
You would always have a place at the round table here Jenny!
Your voice shall be added to the legions of people are getting fed up with it.
Straight, gay, people of all colors have had enough.
It is important to know 65% of the gay community doesn’t support this non sense either. They also think it is absolutely ridiculous.

Nope!
You’re obviously racist if you roleplay a Dwarf not trusting an elf! giggle

Where are your hidden white robes and pointy hat?
You’re Nazi uniform?

What about elves not trusting dwarves? *chuckle*

Just for fun, a few months back, I wrote a short scene between SETH (a human looking for a dwarf named DROOGAN) and YSABEL (an elven nurse). I wanted to play on the stereotypes and have some fun with it while at the same time kind of sticking to them.

It turned out like this: http://www.bloomingfaeries.com/wp-content/uploads/2020/06/Seth-speaks-to-Ysabel.html (this is just an extract, not the wholle scene.)

This didn’t happen in a game, I actually just created the scene from scratch, but it TOTALLY could have happened during a game I DM’d. I have been playing for a long time with a group of extraordinarily creative players (who have been known to win a tournament or three at Gencon), and this kind of quick wit is not unusual. :)

true words indeed. and also if your not 100 percent behind the lore than work with your dm to figure something out. the players and the dm are the ones crafting their experience.

yup and its its their business what they like or dont :)

Well said. I had someone tell me I shouldn’t be reading my favorite fantasy because it centers on the Patriarchy, I didn’t bother telling the person (who obviously hadn’t read it) that one of the most important characters is a four thousand year old Sorceress who is feared for her power the world over, as well as her beauty. And that there are numerous women in places of power all through the series and it even mocks male attitudes about women to a certain extent. I just told the person to do something anatomically impossible to themselves. Crude but satisfying.

power AND beauty … that’s a big no no now
she has to be plain and shapeless and ideally not very female looking
androgynous
yup
that’s ideal :)

I honestly didn’t know this was a thing Jenny, racism over fantasy characters?
I recall back in the 80’s when DnD was claimed by ignorant state governments and conservative Christian groups for being “evil” and “addictive” and was banned in schools here in Australia.
https://www.bbc.com/news/magazine-26328105
The anti-fun police have been around for a while but this, this is next level idiocy that’s infecting every level of society.
Leave us to our own enjoyment what little there is left! We’re all grown ups here and don’t need sjw’s telling us how we should have fun.
Speaking of fun how does one acquire entry to Mel’etana’s famed orgies!

How DARE you have fun! (in best Karen voice) ♥♥

Gawd, it’s been so long since i’ve read anything with the Drow in it.
Though i did buy the collectors editions of the trilogies of Dizzt by R.A.Salvatore. Honestly though, i’d rather have just bought the non-collectors editions. I feel like i’d spoil them if i read them, but i really want to. lol.

I might have to buy the ‘normal’ versions of them next time, so i can actually sit down and read them. Till then though, i’ve got the last book in the Thrawn trilogy to finish and i have the Jedi Academy trilogy on the way. So they’re the top of my ‘to read’ list right now.