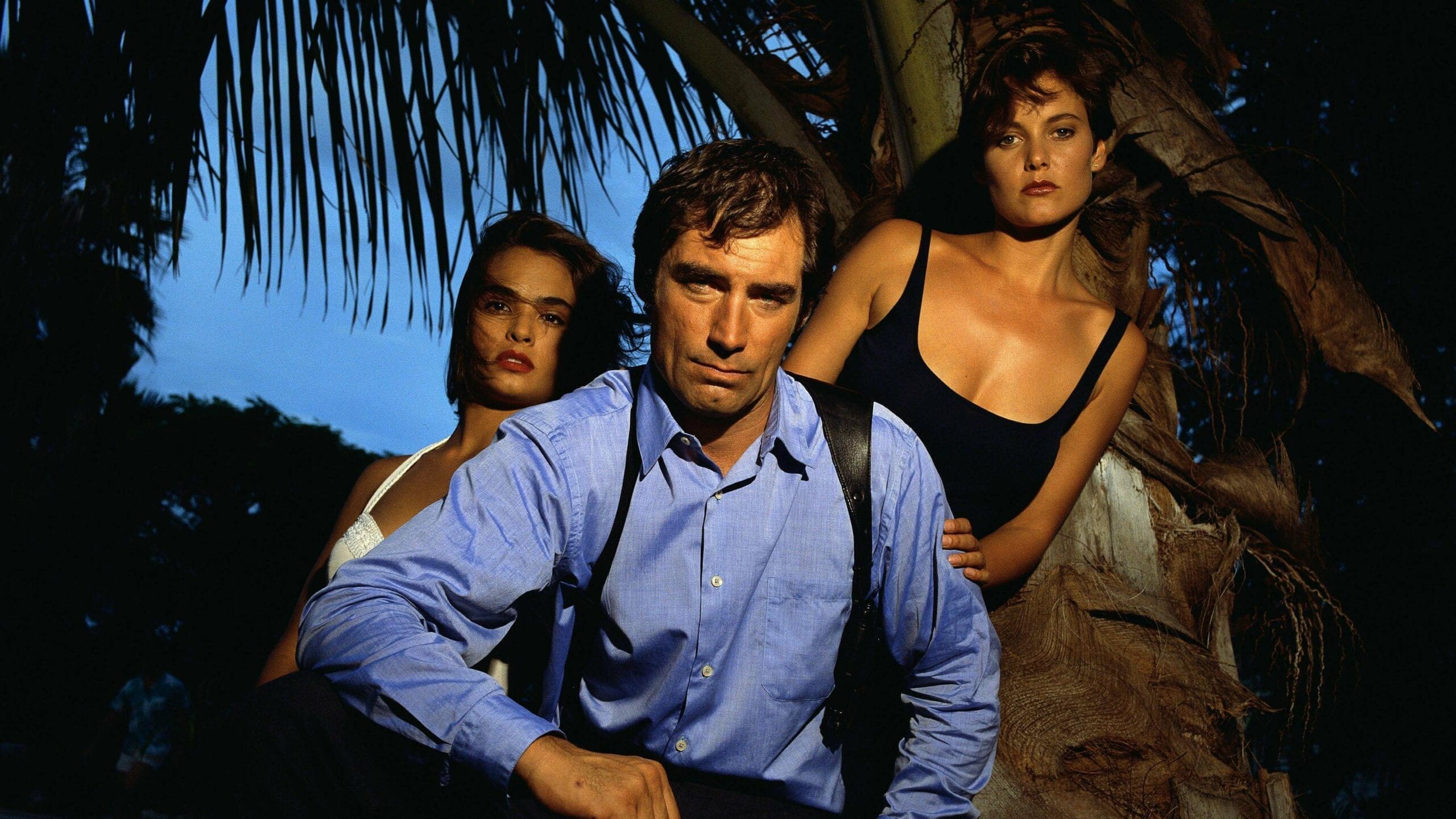 “Whoever she was, I must’ve scared the living daylights out of her.”

The 1980’s were a period of transition for the Bond franchise. Sir Roger was getting past his prime and admitted so himself when he stepped down from the role after A View to a Kill. The new set of films would have a darker, more serious tone; sort of the opposite of what Roger’s films gave us. Timothy Dalton had been offered the role twice before, once for On Her Majesty’s Secret Service, and he would even test for A View to a Kill and ultimately turn it down. A true artist of integrity, he found himself too young the first time and committed to other engagements the second. But his time had finally come and he would deliver what many have called a Bond after Fleming’s own heart. He was also seen on set flipping through the novels, trying to find the character he would embody. But we’re here to talk about the women who populated his films! Let’s take a look into the 1980’s.

(Read our discussions of the Bond Girls of Sean Connery, George Lazenby and Roger Moore)

*Spoilers for The Living Daylights and Licence to Kill*

Kara Milovy is a Russian cellist who fell for the wrong man: Georgi Koskov, a corrupt Soviet general who fakes a defection to make a fortune selling high tech weapons. As he betrays the British, Georgi betrays Kara, setting her up to be killed to facilitate his cover story. Ironically, her savior turns out to be her would-be killer, as Bond uses her to get to Koskov, all the while beginning to care for her. But when it comes down to it, whom will she choose?

Alex: Kara has one of the best arcs of any of the Bond Girls, transforming from manipulated victim to gun-toting warrior over the course of the film. Throughout the movie she’s being used by both Bond and Koskov, with all of her actions manipulated by them. In the end she’s given the chance to escape, but chooses to fight with Bond of her own accord. It’s the first time she’s in control of her own destiny, and she ends up saving Bond’s life, much like he did in the beginning when he spared her in defiance of his orders.

Virginia: It is an interesting mirror of the earlier scene. Kara is also very feminine in behavior and appearance, and doesn’t sacrifice this in lieu of badassery (since the two can coexist). I like that she’s a musician and in love with Georgi. There’s more to Kara than to a lot of main protagonists, and certainly some other Bond ladies. Bond also sort of falls in love with her. Not to the extent of Tracy or Vesper, but this is more than a fling no matter how you look at it.

A: Definitely, and that’s a very good point about her being feminine. She doesn’t start off as a part of Bond’s world; she’s just a regular girl who loves her boyfriend and her cello. She’s really swept up in it, kind of like Honey Rider way back in Dr. No, but she’s more innocent. And you’re right, while she sort of matures by the end, she’s still who she always was, just less naïve. There isn’t that modern impulse to turn her into Rambo without the Y chromosome.

V: I think Dalton’s women are right up there with Connery’s in this respect. I love Moore’s women, but Holly and even the passive Solitaire have a chip on their shoulder, as if to challenge Bond because they don’t need no man. Kara is just a docile civilian, a sort of Mary Ann to the Ginger that a lot of other Bond women are. She has a subtle personality, but it is there and it is consistent.

A: That’s a good analogy. She’s so innocent for the first half or so of the movie, and Bond acts differently with her than he has with anyone else. He’s actually dating her like any regular guy would, taking her to an amusement park and on a horse-drawn carriage (which he does in For Your Eyes Only as well, but it’s right after the took out a hit team, so it kind of counts less). It’s undercut by the fact that he’s doing it as an assignment to get to Koskov, but he seems to really be enjoying himself, and her bringing that out in him makes her unique among the Bond Girls. Even Tracy probably wouldn’t have gone for that kind of thing.

V: Tracy be like, “This is boring. Can’t we chase cars?” And their date is so cute in its normalness (aside from Necros being there; definitely not normal). For a lot of the middle of this movie Kara is pulled between her commitment to Georgi and her growing feelings for James. It’s almost like how On Her Majesty’s Secret Service had a love story inside a spy story, and it’s very nice and a great change of pace.

A: I love how genuine it feels too, how you can see them both starting to care for each other even though they should be focused on other things. Actually, it’s Koskov for both of them; they each see the other as being the person leading them to him, although Bond is being more underhanded about it. But that love story is very effective, and it drives a wedge between Bond’s professionalism and his drive to protect the women around him, which is still his greatest weakness.

V: It’s heartbreaking how even once James knows of Georgi’s betrayal Kara still denies it. She can’t believe that the man who gifted her the Lady Rose, her lover, would do anything like use her as a patsy. What if James weren’t here? Kara’s goose would be cooked.

A: It’s a real shot to the gut for her. In an instant she’s disillusioned, try as she might to fight it. Even when Koskov reveals himself to her and asks her to turn on Bond, you can see the turmoil she’s going through. She wants desperately to trust someone, but she really can’t.

V: And again, she isn’t even used to situations like this, as some women would be. She isn’t a spy and isn’t used to trickery of this caliber. She takes Bond, the best bet she’s got.

A: Always a winning hand.

Pam Bouvier is a former army pilot who now works as a CIA agent. Posing as Sanchez’ courier, she is first espied by Bond at Felix’s wedding, but she leaves before they meet. Later she helps Bond infiltrate Sanchez’ operation and ultimately they ruin his life before Bond takes it from him.

Lupe Lamora is Sanchez’ kept woman, a glorified slave who lives only to serve him and is beaten mercilessly when she steps out of line. She’s completely hopeless, resigned to live a life in captivity, until she meets a British spy looking for revenge.

V: I guess you could say these two girls are a little different. Pam works for her government, while Lupe is more used than she “works.” Pam is confident and cool (except when Bond has his eyes on another girl), whereas Lupe is understandably jumpy and easily intimidated by Franz.

A: They’re a great contrast. Pam is like Bond, very independent, calls her own shots, works alone, can take care of herself. Lupe is owned, with no freedom and no individuality. She is what she’s told to be, while Pam is whatever she decides she wants to be.

V: One of the earliest scenes in this film is Lupe being whipped by Franz as he instructs his men to give her lover’s heart to her. It’s very easy to feel bad for her. Once Bond fries Sanchez, her purpose changes; she becomes the item of Pam’s jealousy. As this movie progresses, Pam becomes enamored with Bond and sees him as more than an ally on this mission. I really like that about her.

A: More than anyone else except maybe Anya Amisova – and maybe even more than Anya – Pam feels like a female Bond. She’s a spy, she keeps her focus on the mission, she has sex with him initially just for pleasure. Her growing feelings are similar to his in many of the films as well, and I like how they manifest themselves in more feminine ways, as opposed to her just trying to kill Lupe or something. (“I hope you don’t snore, Q.”)

V: Yeah, and that would majorly drive her likability down. After all, Lupe isn’t a bad person. She’s a victim in all this. It isn’t that Pam has a grudge against Lupe; she just turned out to like Bond more than she expected and wants her feelings to be reciprocated, a reasonable feeling we all have sometimes.

A: Right, and like a professional, she never lets it interfere with the mission. She even makes Bond aware of the fact that there are bigger issues at stake than his vengeance. Even though she’s emotionally invested, she’s thinking clearer than he is.

V: And I love that. I love that he’s so hungry to avenge Felix and Della, and that she’s there to be the voice of reason. Contrast even within similarities.

Moneypenny (Caroline Bliss), The Living Daylights and Licence to Kill

In Timothy’s films, Lois Maxwell leaves us (NOOO!), and we are introduced to Caroline Bliss as Moneypenny.

V: Lois was the bomb as Miss Moneypenny. Her banter with James was priceless and, as he says in From Russia with Love, there’s nobody else. Even with that said, Caroline is my least favorite Moneypenny of the four we’ve had. Can you say boring?

A: Why did they turn Moneypenny into a nerd? Seriously, it’s not just the glasses; she has this doofy persona in the Dalton films, The Living Daylights in particular, where she’s a sort of frazzled office worker. Lois Maxwell, and later Samantha Bond (who I love as well), are very sensual in their repartee with Bond, but Caroline Bliss is like a schoolgirl with a crush.

V: Yes. I’ve heard people complain of Moneypenny being an offensive stereotype, “lusting after Bond,” and that description can only be attributed to Caroline. I think that’s an overreaction, as she is mostly just boring compared to the personality and humor of the other Moneypennys. To me, it makes no sense for this girl to be so fixated on Bond and be rejected by him. Lois and Sean were just playing, acting like normal coworkers within an abnormal job at a government agency. But here a young, intelligent girl is desperately thirsty for Bond. In this circumstance, I feel like he would hook up with her?

A: I think you nailed it with “young.” Maxwell and Samantha Bond feel like mature women, so their back-and-forth with Bond is playful because they’re on an even playing field and can give as good as they get. Bond isn’t taking advantage of them; he’s just joining in on their fun. Caroline Bliss doesn’t seem like she’s up to sparring with him, but rather just hoping he’ll play at all, so his rebuffs of her feel mean, which is all wrong.

V: Exactly. Lois seemed older than Sean if anything, and she was just playing for amusement. Here, Caroline is sort of actively lusting over the older Bond, and it makes me all kinds of uncomfortable.

A: Unlike Dalton, I’m glad she didn’t stick around too long.

V: Agreed there. She’s just boring. However, I’d like to see a version of Goldeneye starring him. That would be a film firing on all cylinders.