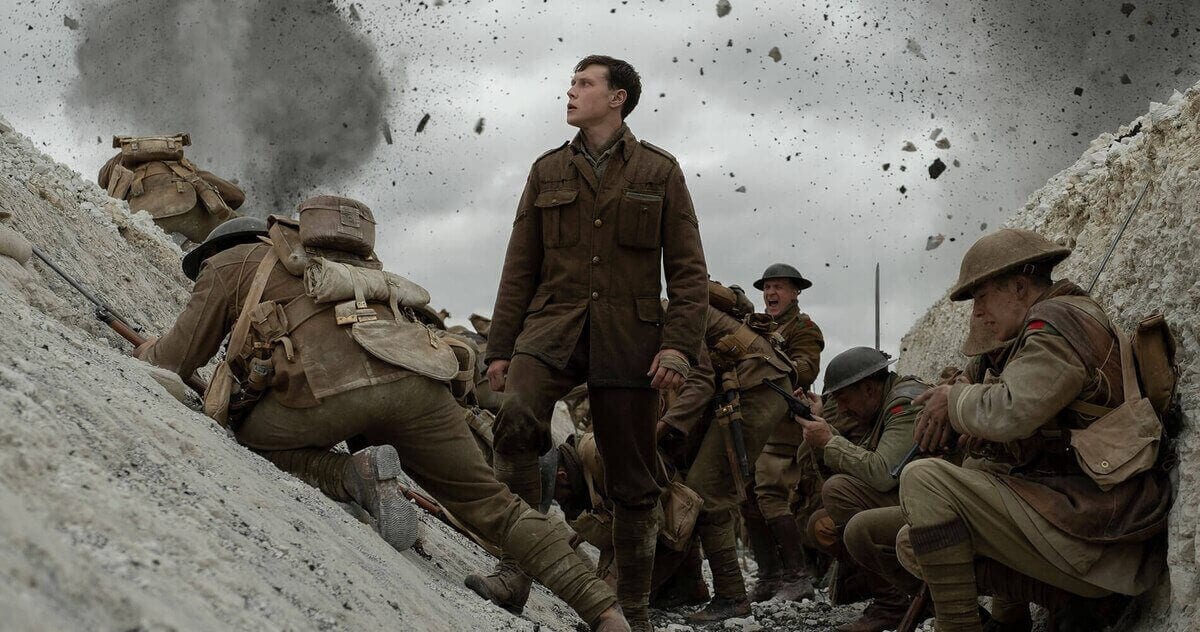 War films have always been an essential staple of Hollywood cinema. Whether it’s The Dirty Dozen, Saving Private Ryan, or Dunkirk, the stories within this genre have always served as depictions of heroes overcoming nearly impossible odds, and it is a nearly limitless cache of narrative potential. So naturally, when I heard director Sam Mendes would add his voice to the genre with the new World War I epic 1917, I was elated. This would come directly after his work with Ian Fleming’s iconic spy character James Bond. As such, I was curious to see what the Oscar-winning filmmaker would bring audiences with this latest entry in the war film canon, and in an arguably under-served period of history in cinema.

1917 opens at the height of Operation Alberich, as we find our two heroes – Blake (Dean-Charles Chapman), the naive idealist, and Schofield (George MacKay), who’s a bit more wise to the various pitfalls of conflict and combat – awakened by a fellow soldier, and they make their way toward General Erinmore (played by Oscar-Winner Colin Firth). While Blake initially believes that the mission isn’t going to be a big deal, Erinmore informs them that they must deliver a letter to Colonel MacKenzie (played by Benedict Cumberbatch). They must venture beyond enemy territory and cross into no-man’s-land to save 1600 men – including Blake’s brother – from being killed in an ambush. As the two soldiers make their way amid exploding mines, rats, barbed wire, and crashing enemy planes, they argue, with Schofield at times lamenting the fact that Blake chose him to join him on the mission. Eventually, Schofield must go alone for the most part as he joins various other troops in his effort to reach Blake’s brother and Colonel MacKenzie.

I’ve been hot and cold on this film since it was first announced. It’s great having another war film on the big screen, especially considering how scarce they’ve been in recent years. However, the conceit of Blake’s brother being at risk gave me pause, as it felt like a clichéd way of getting both the audience and the characters invested in the plot. Yet watching the film play out on-screen made the idea undeniably effective and is a reminder that it’s not about what you bring to the table, but in how it is presented to the audience. Much like many of its forerunners, 1917 embraces the tropes that are often found in war films, be it triumph, tragedy, or camaraderie. What sets it apart, aside from its unique shooting style, is the fact that it is ultimately an intimate character drama that encompasses multiple genres. 1917 is not only a war film but a thriller, giving the entire narrative immediacy, as there is a time limit that hangs across the movie and intensifies the whole piece. However, for all that the film does right, it would be nothing had the performances not worked as well as they do.

Dean-Charles Chapman really steps up to the plate here after his three-season run as a recast Tommen Baratheon on Game of Thrones. Chapman is instantly likable as Blake, serving as the everyman who just wants to do good. At times, his performance is reminiscent of Steve Rogers in Captain America: The First Avenger. This bright-eyed idealism is a quality that leads the character to great tragedy, showcasing why, in reality, that kind of attitude is difficult to maintain on the battlefield. Meanwhile, for the cynical Schofield, the urgency of the mission becomes greater as he goes through the film alone. In the hands of a lesser performer, the character perhaps would have been less than compelling. However, MacKay more than rises to the occasion, at turns kind and courageous, particularly in the third act as Schofield must put aside his fears and complete the mission. The performance MacKay gives here ensures that he will continue to be a star to watch and hopefully will make him an Oscar contender this February. In addition, while they aren’t on screen long, there are appearances by several noted actors, the movie very much living up to the axiom of there are no small parts, only small actors. Given the importance of both Blake’s brother and MacKenzie to the story, it was great to see actors like Game of Thrones’ Richard Madden and Dr. Strange’s Benedict Cumberbatch have the prowess and pathos needed for these small but pivotal roles. While Madden does a great job with his portrayal of Blake’s brother, I particularly love what Cumberbatch brought to MacKenzie, giving the Colonel a singular drive and a sense of quiet resignation. It almost makes one wish for some continuation with the character.

This all a testament to Sam Mendes, who was initially reluctant to write this script. However, having heard of his grandfather’s exploits in the war as a child, he chose to extrapolate that to tell this story. I’m really glad he overcame his reticence and partnered with Krysty Wilson Cairns, who was extremely pleased with the collaborative process with the American Beauty director. While it would’ve been understandable for Mendes to take on something smaller after his big-budget work, it certainly doesn’t feel that way thanks to the unique shooting style. Mendes gives the audience the feeling that they are right there alongside our heroes and provides this story with all the polish of a seasoned filmmaker. This is no doubt aided by the cinematography of the legendary Roger Deakins, each frame looking more beautiful than the last. Images from this film have stuck with me more than any other release from this holiday season.

1917 is a haunting portrait of life on the Western Front. With great performances from the likes of George Mackay, Dean-Charles Chapman, and Benedict Cumberbatch, and shot with aplomb by Roger Deakins under Mendes’ singular vision, this film is an absolutely worthy addition to the war film canon. It serves as proof that, as long as you have a director with a vision, there is still much to say within not only World War I, but the war genre as a whole.

1917 is a haunting portrait of life on the Western Front. With great performances from the likes of George Mackay, Dean-Charles Chapman, and Benedict Cumberbatch, and shot with aplomb by Roger Deakins under Mendes’ singular vision, this film is an absolutely worthy addition to the war film canon. It serves as proof that, as long as you have a director with a vision, there is still much to say within not only World War I, but the war genre as a whole.