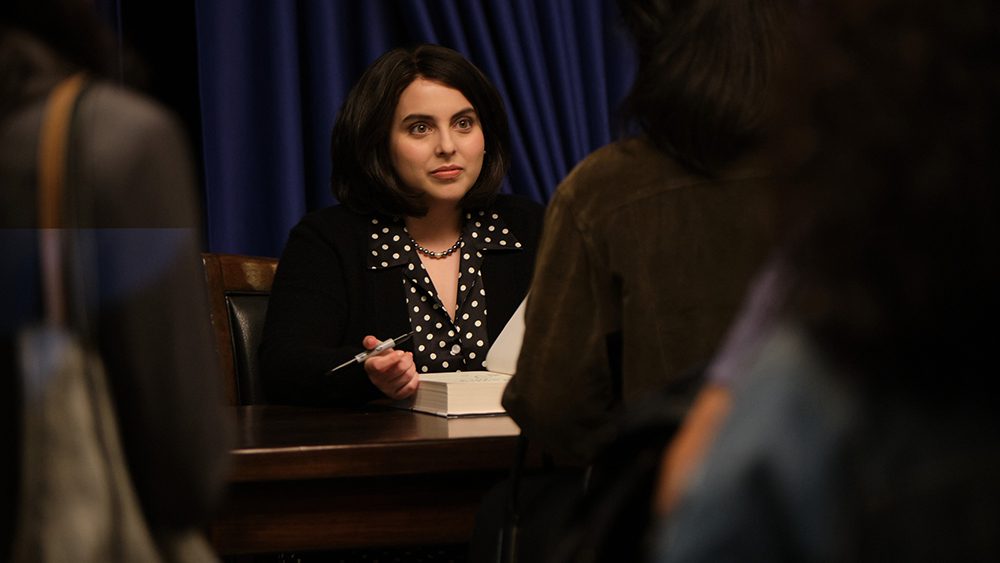 In “The Wilderness,” Monica lands a book deal to pay off her lawyers. Ken Starr’s report is delivered to the steps of Congress. The report is also posted online for the reading pleasure of Ann Coulter. Contrary to Bill Clinton’s advisors’ claims, the Republicans begin drafting the articles of impeachment. The state of Maryland eyes a lawsuit against Linda; her immunity is federal, not state. Paula Jones is left destitute without Susan or her worthless husband, forced to work a telephone psychic line and pose nude for Penthouse magazine. Juanita Broaddrick comes forward with a Dateline interview detailing the night Bill Clinton allegedly raped her. Her story pushes more legislators towards voting yes on impeachment, with Bill’s people suggesting only Hillary can save him… again. Linda’s book prospects have dwindled, as Monica and Ken Starr have revealed all of the juicy details already. However, Lucianne secures her an interview with George magazine. Linda has plastic surgery to improve her image. Matt Drudge interviews Ann Coulter as the articles go to the Senate. Monica is called to testify again, and Clinton’s lawyers offer her a halfhearted apology. Monica has a book signing in New York and panics when she sees all the people who came. She composes herself and tells her handlers she’s going to be alright.

“The Wilderness” has a lot of ground to cover, so it only makes sense that the episode hits the ground running. They pulled off a miraculous balancing act in making the dissemination of the Starr report feel both lightning-quick and slower than molasses. It’s shocking to see how quickly the document goes from being relatively confidential to widely available on the world wide web. But as this is happening, we cut back and forth to see Monica’s reaction, among others, and her horror is palpable as her mistakes are publicly thrown in her face all over again. I also like the dread on Bill Clinton’s face when Hillary tells him she won’t read the report but that their daughter Chelsea already has. Chelsea Clinton hasn’t been a major character in Impeachment, and I believe she has only appeared twice. But she seems the most troubled by her father’s behavior, snubbing him in favor of her mother in “Stand By Your Man” and not interacting with him at all in “The Wilderness.” Chelsea is seen only once in this episode, staring in shock at her computer screen.

Another detail I really appreciate in “The Wilderness” is how they frame Paula’s career choices following her failed lawsuit. The Penthouse scene is intercut with a very different photo shoot: Hillary Clinton’s Vogue spread. This very clearly sends the message that there are very different rules for people like Paula than for the upper crust Clintons. Even Monica gets a book deal with a sympathetic author – the same one who popularized Princess Diana. Going through the details of the affair that effectively ruined her life yet again isn’t what Monica wants, but she observes that it’s her chance to show people the real her. And it seems a preferable means to pay legal fees than what Paula is reduced to.

I have absolutely no sympathy for Linda, though, and I wish Lucianne didn’t even get her booked for the George interview. “The Wilderness” is a strange whirlwind of emotions and choices for Linda, an already perplexing character. She finally goes all-in on the story of her father, which had only been hinted at before, telling Allison that he repeatedly cheated on her mother before deciding to leave for one of the other women. She likens him to Bill Clinton, sullenly concluding that men like them exist to make misery and ruin other people’s lives. The worst part is that they always get away with it. As usual, Linda is hyper-focusing on someone or something else and denying any culpability for a situation she created. I don’t know what I find more infuriating, that Linda thinks her physical appearance is the problem or her defiance in the George interview. After enduring an unending bombardment of dirty looks and mean comments throughout the episode, Linda elects to have plastic surgery. She comes out with a more slender, conventionally attractive face, but the manipulative, rotting soul within remains the same. In fairness, Impeachment has gone to great lengths to show the abuse Linda endured for her weight and appearance. One episode emphasized her reaction to a Saturday Night Live skit in which Linda was portrayed by John Goodman. It’s also true (and rather obvious) that the media and people, in general, are usually rather cruel to women who aren’t drop-dead gorgeous. But I think a lot of the hatred and disgust for Linda stems from her own actions, which she never outwardly doubts or regrets. This character is a flaming dumpster fire of self-aggrandizement and unwarranted indignation. If the real Linda Tripp was this bad (and there are some pretty crummy people out there), I pity anyone and everyone who crossed paths with her. Of course, Bill Clinton’s actions are disgusting and unbefitting of the office he holds; nobody is really denying that. But what Linda did cuts deep because she betrayed and alienated a younger, naive friend who didn’t realize what was happening. And even now that everything’s out there, Linda never once stops to consider that what she did was wrong. The fact that she created all of her problems (and substantial problems for everyone else around her) is completely outside of her field of perception. She’s too busy whining to her lawyer that it’s unfair for her to get sued and telling everyone who will listen that the Clintons are targeting her personally.

“The Wilderness” is a good episode. I think the ending is a little too abrupt, but wanting more of a show is usually a sign that it was pretty good. I really like how this episode highlights the contrast between Monica’s relatively hopeful future and Paula’s solitude and shame. I would have liked to know more about Juanita Broaddrick; hers is by far the most heinous accusation against the president, yet it’s treated with the least care both by the characters and the show itself. I was quite intrigued when this story was introduced last week, but it didn’t really go anywhere. Overall, I think Impeachment has been very good. They did a lot with a story that I didn’t think could sustain a whole season. Season 2 is still the best, though.

“The Wilderness” is a good episode. I think the ending is a little too abrupt, but wanting more of a show is usually a sign that it was pretty good.