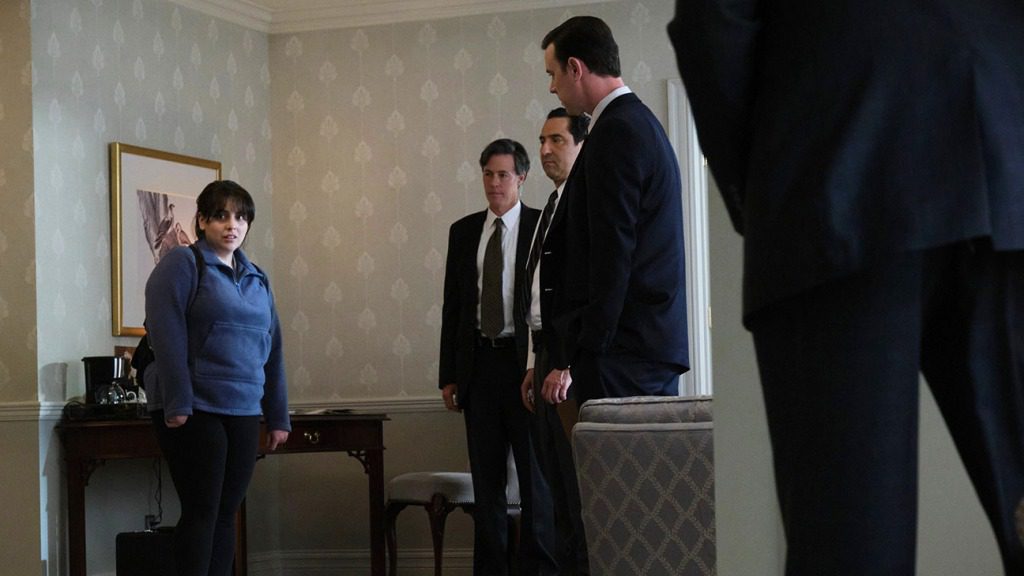 “Man Handled” finds Linda and the FBI strategizing Monica’s confrontation. Just like in “Exiles,” the unsuspecting woman is surrounded in the mall and escorted to a hotel room. Over the next 12 hours, Monica is humiliated and grilled for information regarding her affair and subsequent perjury. They offer her immunity from prosecution if she cooperates with the investigation and makes monitored calls to President Clinton, his secretary Betty Currey, and Vernon Jordan. Monica’s parents and her father’s attorney try to advocate for her from afar, and her mother (Mira Sorvino) ultimately comes to the DC hotel from New York. When the attorney informs Monica that the FBI can’t detain her, she and her mother leave.

Sarah Paulson as Linda Tripp is mostly absent from “Man Handled,” but the entire episode details the fallout of her scheming, treacherous behavior. I think it was a good decision to retread as little ground from the premiere as possible. The discomfort of Monica, Linda, and even Mike Emmick (Colin Hanks) is palpable throughout the interrogation. The tactics used on the young woman stop just short of psychological torture. Lying, misleading, and chastening Monica are never off the table as means of getting her to talk. While Emmick seems somewhat sympathetic towards Lewinsky and tries not to be too rough with her, things get out of hand quickly when Ken Starr calls in Jackie Bennett. From there, he and Emmick do a sort of good-cop-bad-cop routine, with the latter desperately attempting to keep Jackie under control. Bennett is a total loose cannon and makes harsh comments even when they don’t benefit the situation. He even sarcastically calls Monica a lovely kid that her mother should be proud of. I don’t know how much of this was really said, but that’s wildly unnecessary. Even if I don’t like it, I can understand the rough interrogation. But why speak ill of the girl to her mother? How is that helping? I’ve enjoyed Beanie Feldstein’s portrayal of Monica Lewinsky a lot this season, but “Man Handled” is really her episode, and she shines throughout. Linda’s reduced screen time contributes to this, but Feldstein truly sells what this woman is going through. The closing scene, in which she cries in the shower, is just gutting. Mira Sorvino’s silent, subtle reaction as Monica’s mother Marcia is affecting as well.

Linda is a person I find endlessly baffling. “Man Handled” is the first time she’s shown any remorse for her actions, evidenced by her shifty, nervous body language and inability to look Monica in the eye. The scene where she and Monica bump into each other in the mall is nothing short of chilling, a wordless exchange of glances that says everything. Apparently, this was the last time the two ever met, Linda shocked and sheepishly grasping her shopping bags as her betrayed friend balked. Later conversations with Linda’s daughter Allison and Paula Jones’ lawyers paint a vivid picture of Linda’s indecisiveness and self-righteous attitude. When Linda comes home after her final encounter with her former friend, her normally self-involved daughter shows genuine concern for her. Allison drops her original query about borrowing Linda’s van to ask if she’s alright. Rather than showing the smallest bit of humanity or vulnerability in response, Linda orders her to go back upstairs. Earlier in the season, Linda told Monica her children are her greatest joy and reason for living. If that’s the case, she has a bizarre way of showing it. Every interaction with her kids we’ve seen has been tense and combative. Even the things Linda supposedly values most don’t command much of her attention or warrant her kindness. 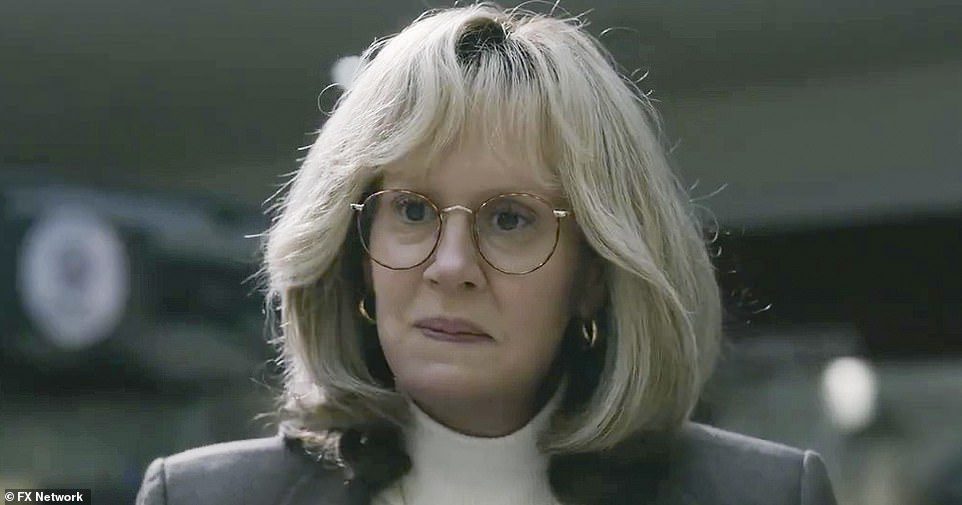 “Man Handled” seems like it should be the least interesting episode of Impeachment. It takes place – for the most part, at least – in a hotel room and a shopping mall. The latter is made more claustrophobic by the lighting, music, and camera angles. There’s also only one big development in this episode: Monica’s entrapment and interrogation. American Crime Story excels at making even its least dynamic scenes compelling. I’m continually stunned by how enthralling this season has been; of the topics American Crime Story has tackled so far, this one seemed the least interesting to me initially. I was drawn to The People vs. O.J. Simpson for the cast, and while I didn’t know anything about the Versace killing (I didn’t even know he had been murdered), that’s probably my favorite season. A well-known sex scandal didn’t seem on par with those stories of murder and betrayal, but I should have known what to expect from such a consistently fantastic series.

Matt Drudge isn’t even mentioned in “Man Handled,” and Paula Jones is only referenced in regard to Monica’s perjurious claims. For that matter, we don’t see President Clinton or any of the White House staff at all in this episode. It’s a testament to the top-tier acting of Feldstein that “Man Handled” is so good despite the conspicuous absence of some of Impeachment’s best characters. There are a couple of funny scenes with Ann Coulter and her reporter buddies. She brushes aside ethical concerns and questions about the validity of the tapes as an argument for impeachment. Coulter sees the sex scandal itself as plenty of reason to impeach. She also comes to the conclusion that some cultures are right to kill female infants based on Linda and Monica’s conversations. Cobie Smulders is endlessly entertaining as Coulter and delivers the kind of lines you laugh at but feel guilty about afterward. “Man Handled” is a great episode of Impeachment. Stellar performances turn what could have been a dull and uneventful hour into one of the highlights of the season. The episode also looks great and is spurred on by fantastic dialogue. As the season winds down, I’m again perpetually impressed with American Crime Story.

“Man Handled” is a great episode of Impeachment. Stellar performances turn what could have been a dull and uneventful hour into one of the highlights of the season. The episode also looks great and is spurred on by fantastic dialogue.