"I'd like a quiet death, and then, as you promised, I want to live forever." 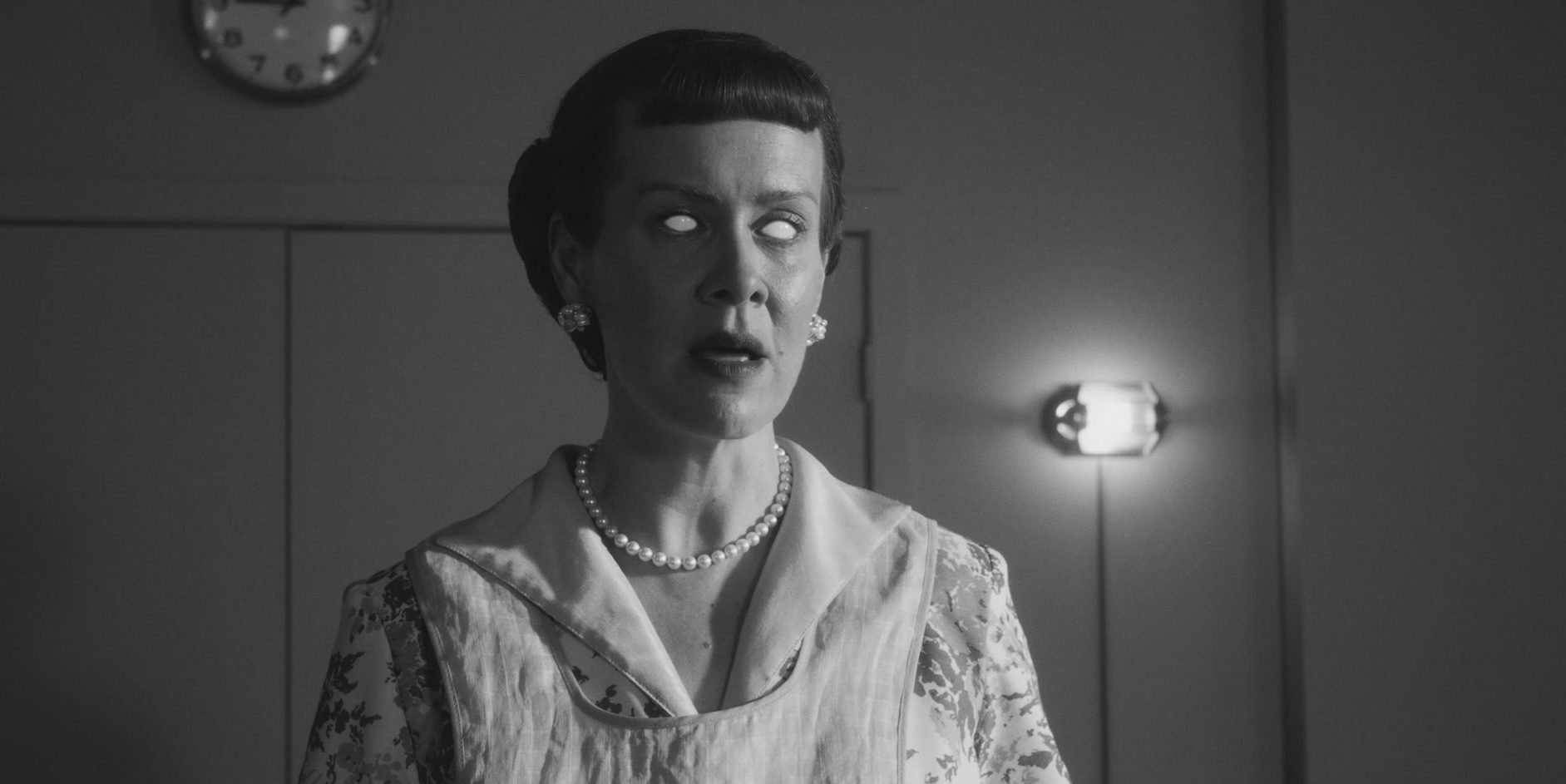 “Blue Moon” finds President Eisenhower in negotiations with the aliens to sign a new treaty. While he’s reluctant at first, they threaten to kill his possessed wife, and he acquiesces. Valiant Thor (Cody Fern) arrives to “process” the harvest and provide the promised technology. Meanwhile, the newly restored Mamie seeks to popularize Halloween among adults. Ike discovers a secret series of tunnels under the White House and is horrified by the suffering of the test subjects. He creates Area 51 and has them sent there. Ike finds Mamie in bed with Valiant. Nixon has Marilyn Monroe killed to silence her ravings about the aliens. Eisenhower and Nixon take Lyndon Johnson to see the alien facilities. In the present, Troy has his baby, but it doesn’t have the characteristics the aliens are after, so they kill it. A week later, Troy is reunited with his friends. He’s still hysterical when Calico tries to comfort the group. She shows them her favorite place, a moon landing site where she says the historic landmark was faked. Flashbacks show Calico’s abduction, impregnation, and the false moon landing. Later, Cal starts having contractions but won’t let Troy tell anyone for fear of the baby’s fate. Troy decides to deliver the baby himself, and the operation is a success. However, the baby attacks Cal.

“The Future Perfect” begins amid Vietnam war protests. Valiant insists that the turmoil is necessary to distract the public from the missing American citizens. President Nixon isn’t so sure as his approval rating plummets. An ailing Eisenhower refuses the aliens’ treatment and dies after telling Mamie and Valiant that they deserve each other. President Nixon tells Gordon Liddy that the aliens want him dead and asks him to bug Valiant’s office in the Watergate. Mamie talks to a reporter, falsifying Nixon’s actions under the moniker Deepthroat to protect her identity. When calls arise for Nixon’s resignation, he considers outing the aliens. However, they remind him of their dominance, and he steps down. In Area 51, Mamie befriends Calico. In the present, Area 51 goes into lockdown, and Mamie is shocked as her room is invaded by armored men. They inform her that there has been an unauthorized death: that of Cal and Troy. The soldiers kill Cal’s baby, and Theta (Angelica Ross) has them killed in retaliation. Kendall and Jamie find the guys’ dead bodies and go into labor at the sight. Theta has Jamie’s baby killed, and then Jamie too. Kendall’s baby is the perfect hybrid specimen, but she is killed, and her body is preserved for future breeding. Mamie discovers a Martian plot to kill the majority of humans and rule the Earth. Theta pretends to have been unaware of this plan but ultimately kills Mamie and recruits Calico to raise the babies. 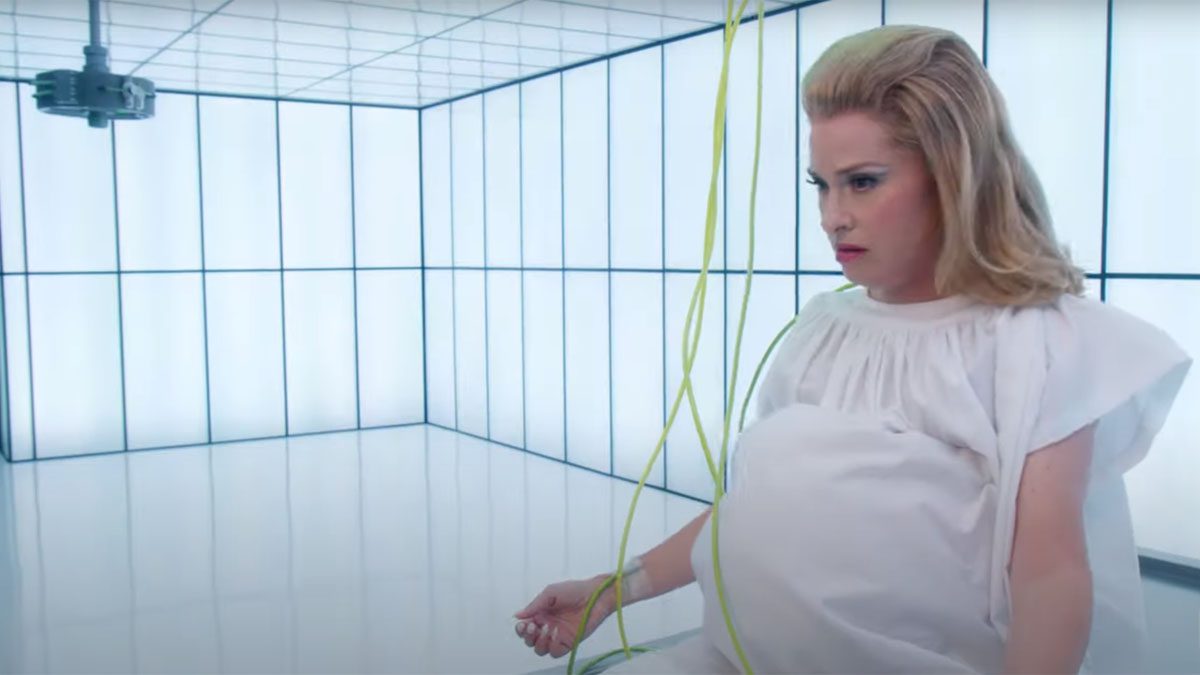 I’m absolutely baffled by the ending of “Double Feature.” “Red Tide” ended abruptly and unsatisfyingly, a blow I had hoped would be lessened by “Death Valley.” I initially thought the two stories would connect somehow and that “Winter Kills” wouldn’t really be our last glimpse of the “Red Tide” characters. However, I think “Death Valley” is worse overall and less consistent than “Red Tide,” and not by a little. I like the idea of a double feature season, and things were going well for a while. But looking back, I’m so frustrated by the rushed conclusions of both stories and the wasted potential. I would have rather gotten a more fleshed-out finale to “Red Tide” than the highly streamlined “Death Valley” stapled to its back end for no reason. The only connection I see between the two halves of the season is that Angelica Ross and Leslie Grossman are the victors in both parts. In “Red Tide,” Ursula and the Chemist survive to raise Harry’s children. Now, Theta and Calico will nurture a generation of hybrid children. This thematic tie (if it can even be called that) is tenuous at best, and could even be a coincidence. “Red Tide” easily could have been its own season, and maybe “Death Valley” would have been better had it been given more than four episodes to tell its story too. 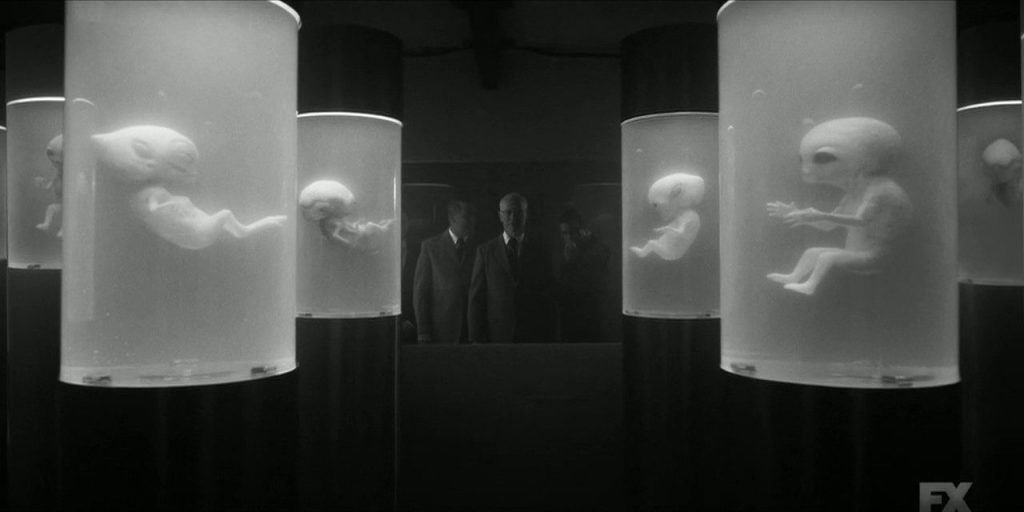 I love Sarah Paulson. Everybody does; she’s the best part of almost every project she’s in. But the character of Mamie is not satisfactory connective tissue for the two timelines in “Death Valley.” I still find it bizarre to divide a ten-episode season in half, not once, but twice. Giving “Death Valley” less than half a season to explore two different time periods and sets of characters wasn’t a great idea, and it didn’t pay off. Mamie isn’t portrayed as very likable or interesting in “Death Valley.” What’s the point of circling back to her in the end? How is her death supposed to make the audience feel? After the way she treated her own husband, it’s hard to be upset over her demise. In fairness, nobody was really likable in “Death Valley.” I liked Ike at first, and I still think casting Neal McDonough in the role was a stroke of genius. I hope he comes back for more seasons. But as the story progressed, it became clear that Ike was a spineless, indecisive man being pushed along by a deceptively controlling wife and a legion of offworlders. Then, there was the line from Mamie in “Blue Moon” about Ike cheating on her. Really, AHS? Do better. The Eisenhowers started out compelling and somewhat mysterious, but this whole facet of the story has devolved into a soap opera. 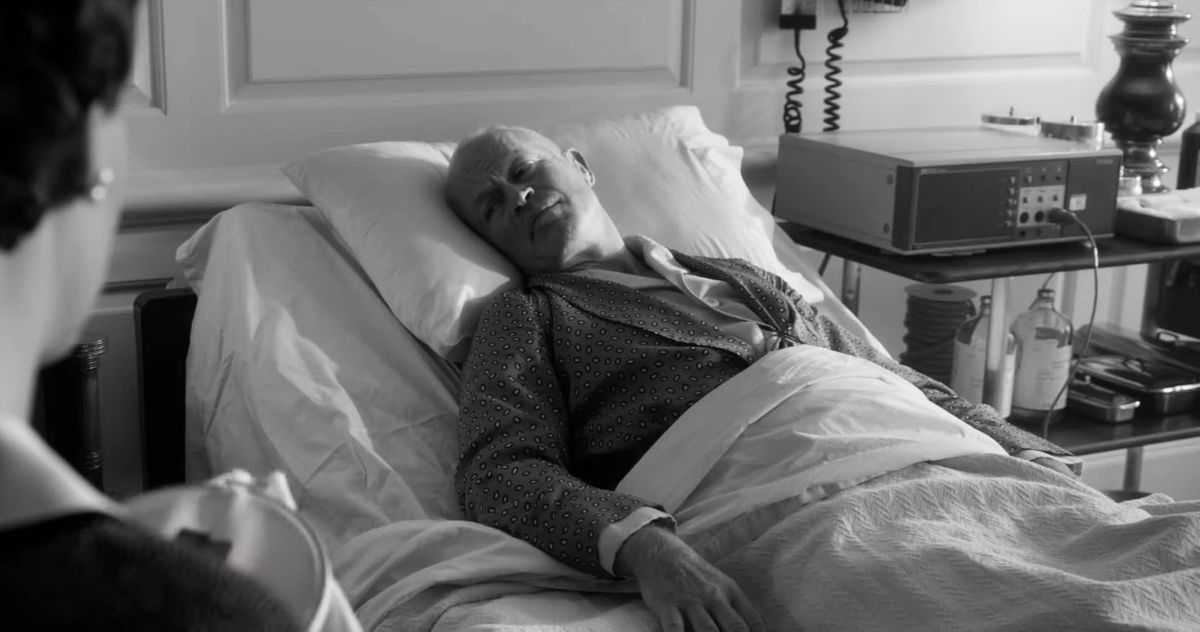 I don’t think JFK, Richard Nixon, or Marilyn Monroe were necessary to the story or provided any real entertainment value. I’m also confused about this show’s version of events surrounding Kennedy; he was dead last week and alive again in “Blue Moon” with no explanation. The way “Death Valley” tries to redefine critical moments in American history as the work of aliens doesn’t pan out well at all. Listen, if I wanted to watch alien conspiracy nonsense, I’d watch the History Channel after midnight. Speaking of aliens, what’s with the reptilian alien race? We see one of them one time, and they’re mentioned once at the very end. It’s just like the police officer showing up to investigate the murders in “Winter Kills,” never to be seen again. This was probably the result of the shorter, rushed season(s?), but it’s sloppy and distracting to introduce plot points you don’t intend to play out. This is just so frustrating because the 1950s portion of “Death Valley” started out so well. The cast, concept, and every technical aspect pointed to something more. What a waste this was.

The modern storyline in “Death Valley” is worse and less enjoyable overall than the flashback portions, but at least these segments were always bad. It’s not disappointing when something that started out bad stays that way; it’s just par for the course. Kendall, Jamie, Troy, and Cal just aren’t likable characters. We learned so little about them that it’s hard to care for them at all. Their friendships felt forced thanks to the stilted performances and ridiculous writing, and Troy and Cal’s relationship is even worse. When they started talking about having a family, I lost it. These two have zero chemistry in all four episodes, so I’m not sure why the writers think giving them a tragic ending will help. Likewise, the bond between Mamie and Calico is introduced too late to have much of an effect, and they only share a couple of brief scenes.

Both halves of “Double Feature” show promise in their concepts, acting, and to an extent, the execution. But both parts failed to stick a satisfying landing, and about half of “Death Valley” was less than good from the beginning.

"Blue Moon" and "The Future Perfect" feature the usual stellar acting and interesting ideas American Horror Story is known for. But rushed, sloppy execution and cringey dialogue drag down something that could have been great.