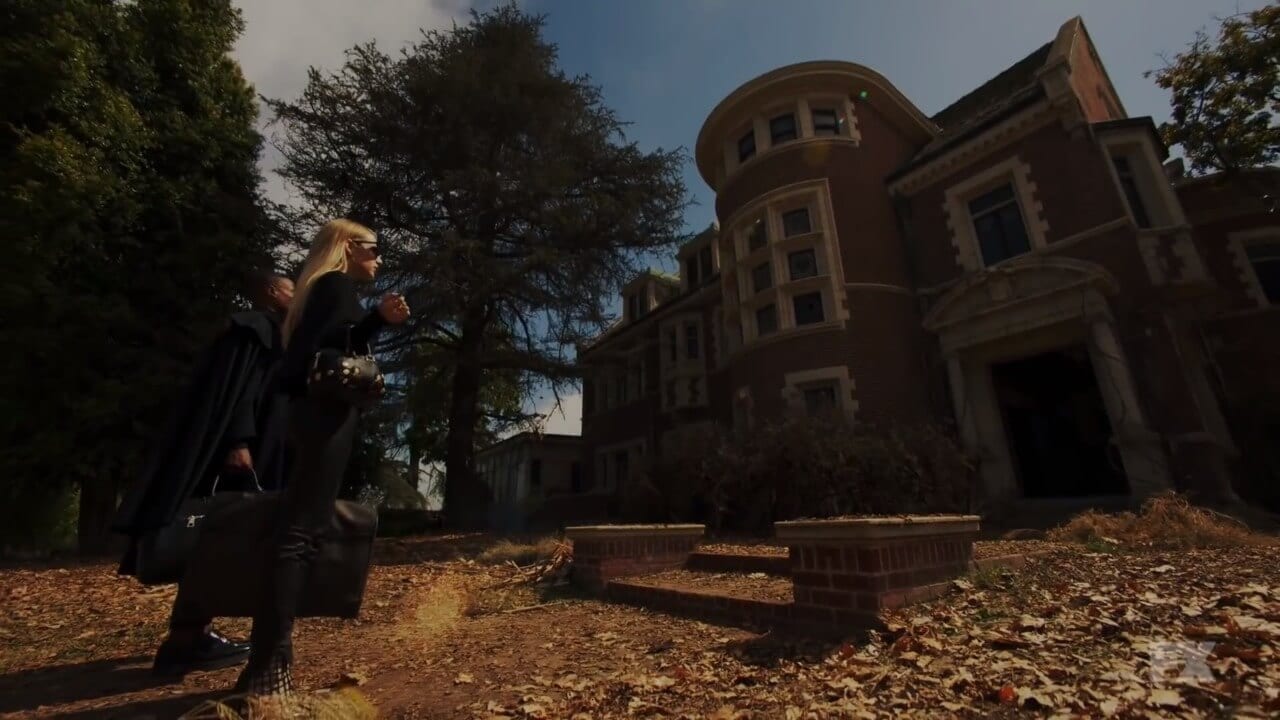 In “Return to Murder House,” Madison and Behold pose as a couple and purchase the murder house. Once inside, Behold performs a ritual to make the spirits within visible. There they encounter Been Harmon and Tate Langdon, but they don’t give up any answers about Michael. Billie Dean Howard is there too and says she has nothing to say about him, but Constance offers to oblige in exchange for the banishment of Moira. Behold locates Moira’s bones and, per her request, buries her in her mother’s grave. Moira’s spirit is reunited with that of her mother and together they disappear. Constance tells Madison and Behold the story of raising Michael, his killing small animals and aging a decade overnight. She went to the murder house and committed suicide to escape him. Ben informs them that once Constance died, Michael started coming to him for guidance. Vivien comes out and tells them that Michael is more than evil; he is the Antichrist. In her story, the Black Pope of the Church of Satan and his followers – Mrs. Mead among them – arrive and perform a Black Mass. Madison shows Violet that Tate isn’t evil and that he did what he did because of the evil within the house. Confident in what they have seen and heard, Madison and Behold leave.

“Return to Murder House” begins a little differently than I had expected. Madison and Behold pretending to be newlyweds is hilariously awkward, especially when she says they can’t wait to make babies in the murder house. I had also expected to see more of the characters from Murder House, like Hayden and maybe Addie. That being said, I think it’s a really good episode that provides some closure from the Murder House season and delves into Michael’s background and character. 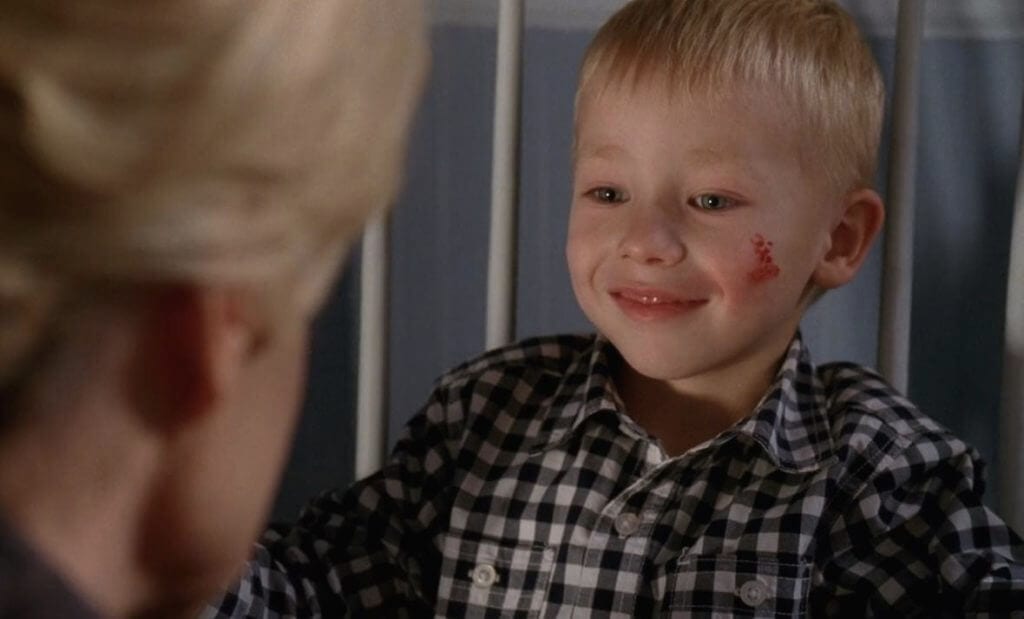 One thing I love about “Return to Murder House” is the dichotomy it displays in the character of Michael. Of course, when we first see him through Constance’s eyes, she describes him as an angel full of goodness and light. However, as he begins killing animals and displaying other disturbing behaviors, her concern grows, eventually culminating in her suicide after Michael kills the priest. When Michael finds Constance’s body, he is genuinely heartbroken. He also reacts to the situation much like a child might, repeatedly nudging her and trying to make her get up. With Ben, Michael also displays some humanity, desperately trying to be “good” and to reconcile with Constance’s spirit. However, his true nature wins again, as he kills the new tenants and destroys their souls, banishing them from the house. It’s as if there are two Michaels within him: the Antichrist and the scared boy trying to understand what’s happening to him. His accelerated aging doesn’t seem to affect his mind like it does his body, as his responses to tragedy and his own actions are like those of a child who just can’t comprehend his surroundings. Even when he plays with Ben, he plays like a little boy would, tossing and catching balls. We know it’s going to have to end badly for Michael; there’s no other way for this to go. It’s interesting that, after showing us what Michael is capable of and the kind of fear he instills in people, they choose now to introduce this very different aspect of the character. And, as usual, Cody Fern is killing it in this role. In the same scene, you literally see him go from mindlessly strangling Constance like an animal to crying and begging her for forgiveness. Everyone loves the returning actors like Sarah Paulson and Jessica Lange, and they’re great here too, but I hope this guy doesn’t get overshadowed because he may have the hardest role of all. While Fern has been acting for ten years, he hasn’t been in much, so the very fact that he can share the screen with such seasoned, iconic actresses and not be lost is a feat in and of itself.

Emma Roberts is really good in this one too. As Behold points out near the end, she shows a surprising amount of vulnerability in “Return to Murder House.” She tells him about her first nude scene and how the producer wouldn’t compromise and get her a body double, and in the end, she helps Tate and Violet, which doesn’t help her personally at all. She also comments at one point that she’s been given another shot at life and can’t afford to mess it up. I’ve always found Madison to be an entertaining character, but I’ve never really liked her or felt sympathy for her before. They’re doing a lot of amazing things with this season, and I’m almost sad it’s more than half over. I am a little disappointed that we never see the Harmons together, although Vivien does hint at the possibility of forgiving Ben and reconciling with him, which is honestly more than he deserves. She does tell him to watch the baby, which seems fair. They get their moment, and Tate and Violet get theirs, but I wish we could have seen the whole family together one more time. However, word is that Jessica Lange isn’t done with this season, so maybe Constance will be back, which means they would be too. However, I find it more likely that she’ll be reprising her role of Fiona from Coven, or playing an entirely new character.

Speaking of Lange, it goes without saying that she’s amazing in “Return to Murder House.” She always nails it, and her return was one of Apocalypse’s big draws in the first place. In a shorter season, it’s interesting to wait through half of the episodes to re-introduce her, but I think it works well. Ever since most of the denizens of the Outpost expired, the show has gotten a lot better, and every episode has been edge-of-your-seat exciting. At this point, I have a feeling that either Mallory – or Coco if they really want to subvert expectations – will defeat Michael and undo what he’s done. I definitely sensed some Adam and Eve symbolism with Emily and Timothy, and I think that’s sure to come back, not to mention Venable’s misshapen back. I can’t imagine they’d reveal something like that just to kill the character and never show her again.

Overall, “Return to Murder House” isn’t quite what I expected, but it’s really good nonetheless. There are some emotional callbacks to season one and a lot of fantastic acting all around. There isn’t a weak link in this episode, but I think Fern, Roberts and Lange really get a chance to shine. We’re getting closer to the end, and I can’t wait to see where the story takes us.

“Return to Murder House” isn’t quite what I expected, but it’s really good nonetheless. There are some emotional callbacks to season one and a lot of fantastic acting all around. There isn’t a weak link in this episode, but I think Fern, Roberts and Lange really get a chance to shine. We’re getting closer to the end, and I can’t wait to see where the story takes us.