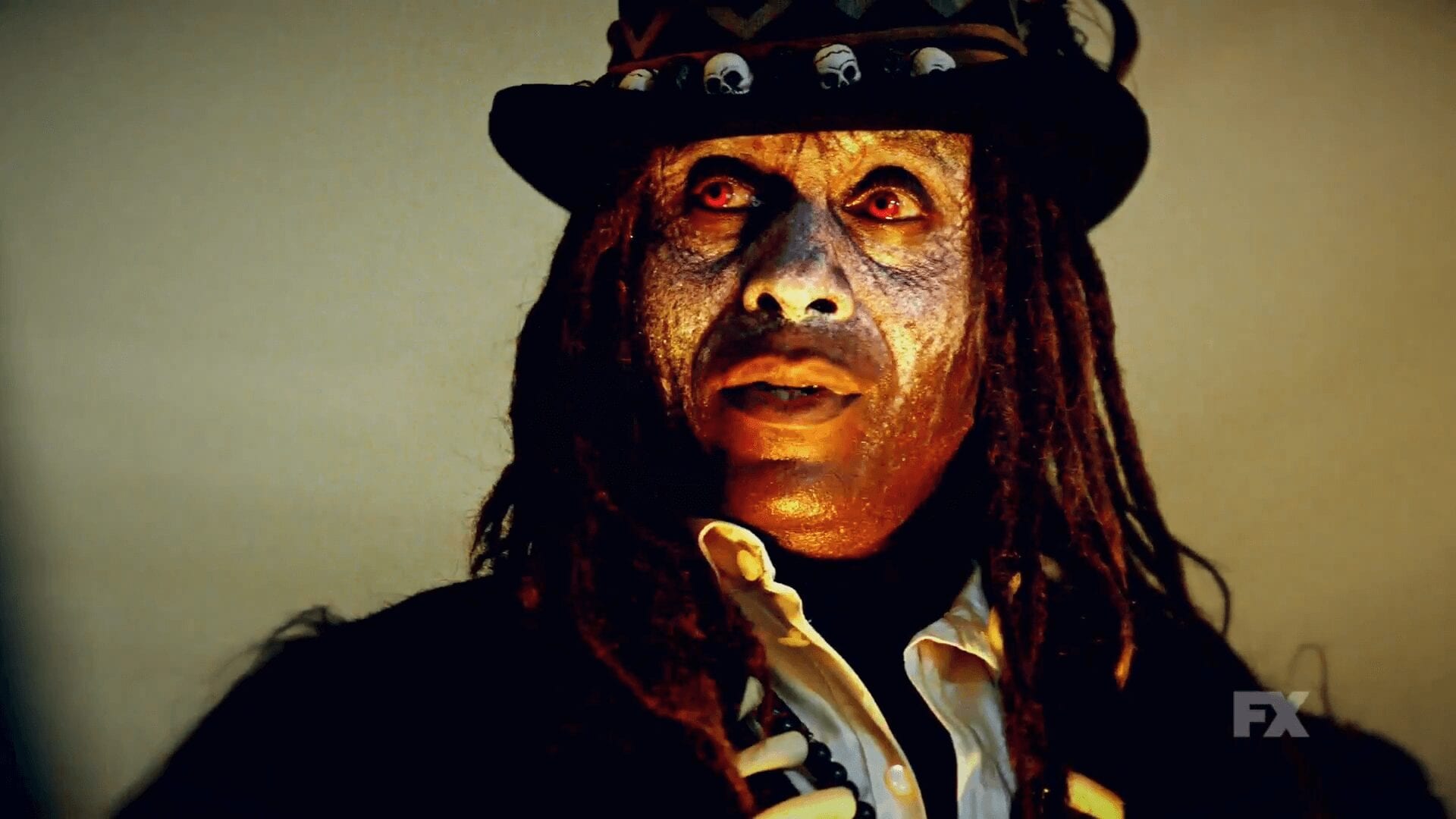 In “Traitor,” Dinah concocts a potion to punish a woman’s cheating husband. Cordelia arrives and asks Dinah to arrange a meeting with Papa Legba. Meanwhile, Joan Collins re-surfaces as an actress named Bubbles McGee who stars in tasteless slasher movies. Madison appears and informs Bubbles that she’s been summoned. Bubbles has the ability to read minds, and Myrtle asks her to meet Ariel and read his mind to discover his plans for Michael. Dinah summons Papa Legba for Cordelia, but only in exchange for money. Cordelia asks Papa to open the gates to the Underworld so she can trap Michael there. Nan comes out and shocks the other witches by saying that she loves being in Hell with Papa; she gets to cause lots of trouble. Papa says he’ll do what Cordelia asks but only in exchange for the souls of her whole coven. Of course, she says no, so Papa and Nan retreat to the underworld and Dinah chastises Cordelia for wasting the opportunity. Meanwhile, at the academy, Coco has learned to detect the number of calories in food items. She begins choking on a snack cake and Mallory literally pulls it out of her throat, saving her.

Cordelia continues to deteriorate, telling Zoe she’s too weak to face Michael. Zoe replies that she believes Mallory to be the next Supreme, not Michael. Myrtle and Bubbles invite Ariel to dinner, and Bubbles succeeds at reading his mind; he thinks about John Henry being a pile of ashes and plans on doing the same to the witches. At the academy, the witches, along with Behold, have a dinner celebrating Mallory’s talents. Behold asks how they can eat and be happy knowing that Michael is out there and what he is, but Cordelia insists that they enjoy the night as it may be their last time together as a group. In a flashback, Cordelia brings Myrtle back from the dead and asks her for guidance. Back in the present, Cordelia, along with Myrtle, Zoe, and the others, go to the gas station where John Henry was killed. Zoe retrieves the ashes and Mallory successfully pieces him back together. He tells Behold and the witches about the night he was killed. Cordelia asks Coco to eliminate Mrs. Mead. Outside the grocery store, Coco follows and threatens Mrs. Mead, and two men collect both women. One of the warlocks creates a poison that only works on women, but the witches show up and Cordelia states that it was already invented by a witch to work on men centuries earlier. She has John Henry burn both men at the stake, along with Mrs. Mead.

At the beginning of “Traitor,” I was confused and wondering what Dinah and her potion had to do with the main story. I even wondered if the woman’s husband would end up being Brock, and Coco the woman with whom he cheated. With the way they’re connecting things this season, I find myself searching for connections that aren’t even there. I think it’s cool that they brought Joan Collins back after her other character Evie was killed in the Outpost, and I can’t help wondering if the two are really the same. After all, Cordelia hid Dinah, Mallory, and Coco in plain sight at the Outpost. Regardless, I quite enjoyed the character of Bubbles and the campy movie “Traitor” showed her filming was a nice touch. Bubbles’ bickering with Madison was great, and I loved her rapport with Myrtle and how close the two seem to be. There are only three episodes left this season, but I hope to see more of this character.

That being said, the next and final three episodes are probably going to mainly consist of Michael and the witches’ final showdown and the buildup to it. I have very few complaints with this season so far; the story is engaging, it feels epic, it’s great to see so many returning characters, and the actors are amazing, as always. But if I have one nitpick, it’s that Apocalypse is tied with Roanoke for the shortest season, and I’m not sure why. There’s definitely something to be said for brevity, but this is the biggest story they’ve done so far and, in many ways, it’s giving the fans exactly what they want. Even at the end of each episode, I’m shocked that it’s over. This is partially because I’m so sucked in I don’t even notice the time passing, but I also think it’s because it feels a little brisk. Things are simultaneously moving quickly and not leaving much room for the final battle. I’m not saying I don’t think they’ll provide a satisfying conclusion; I’m just a little nervous. I don’t see why this wasn’t a 12- or 13-episode season, especially since the first three episodes were basically a completely different story.

It was really cool to see Jamie Brewer again in “Traitor” and good to know that her character, Nan, is happy with Papa Legba. I must confess I was hoping that his resurfacing would involve Angela Bassett as Marie Laveau somehow; they’re bringing back pretty much every character that was killed off in Coven, so why not the Voodoo Queen herself? Although it wasn’t exactly shocking, I’m glad Cordelia said no to Papa’s offer. Whether it’s “worth it” or not, she won’t sacrifice the souls of her witches, even to stop Michael. Time and again, she proves to be a better person than her mother, and more empathetic. Coco’s ability to detect gluten was hilarious, but it kind of feels like they’re milking the joke now. I hope she has some cool powers besides determining the nutritional value of food. In “Traitor,” they finally reveal how and why Cordelia brought Myrtle back, and I think this was a particularly emotional scene. I’m not sure I think Mallory is the next Supreme, though; I think she might be something completely different, like an angel maybe. Earlier this season her powers were displayed to equal Michael’s own and terrify him. A new Supreme just doesn’t seem equal to the Antichrist, and besides, I don’t want Cordelia to die any time soon. She’d only just become Supreme at the end of Coven, and it would be a real shame to see her unseated so quickly. It’s also possible Michael is using dark magic to wound Cordelia, as opposed to her naturally fading due to the rising of a new Supreme. Although she wasn’t in “Traitor” as much, I think it’s worthy of note that Kathy Bates absolutely killed it as Mrs. Mead. Her ordering ingredients from the butcher to add “that Satanic zing” was quite funny, and she makes this rather outlandish character completely believable. Her smile while being burned by John Henry was a brilliant touch, and it looked so sincere.

Overall, “Traitor” isn’t my favorite episode of the season, but it’s still effective and entertaining. Apocalypse is doing a lot of exciting things with fan-favorite characters while still introducing new ones. This is easily my favorite season since Hotel, and I may end up liking it better than that. I can’t wait to see how this conflict gets resolved, and who, exactly, will fight Michael.

Overall, “Traitor” isn’t my favorite episode of the season, but it’s still effective and entertaining. Apocalypse is doing a lot of exciting things with fan-favorite characters while still introducing new ones. This is easily my favorite season since Hotel, and I may end up liking it better than that. I can’t wait to see how this conflict gets resolved, and who, exactly, will fight Michael.