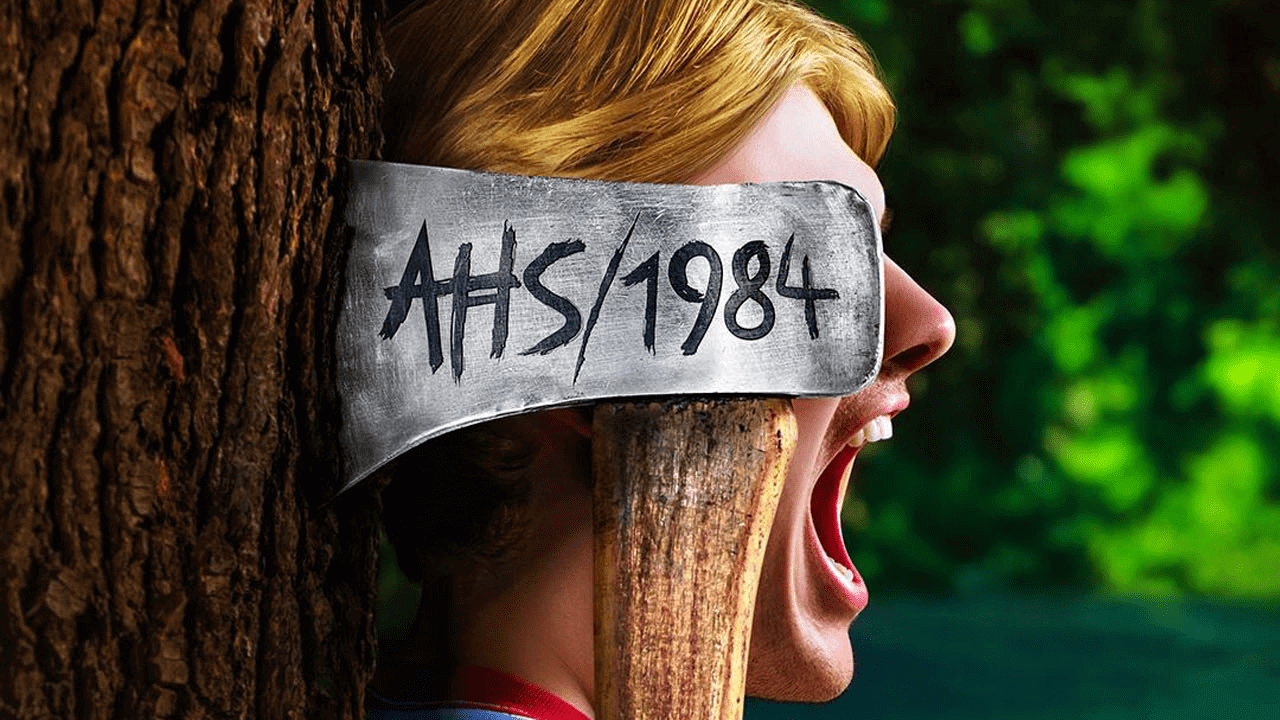 Well, folks, it’s September, and that means it’s time for a new season of FX’s smash hit anthology series American Horror Story! If you watch TV or use the internet at all, you’ve likely seen the ads for this season, 1984, featuring a slasher theme. AHS has always gone to great lengths to accommodate a season’s subject. In keeping with this trend, 1984 features a Stranger Things-esque synth opening theme, neon imagery, and a lot of leg warmers.

Season opener “Camp Redwood” opens on a flashback to 1970, showing three Camp Redwood counselors engaged in a ménage à trois. Their fun is interrupted by a killer known only as Mr. Jingles. He takes an ear from each slain counselor. In the show’s present-day timeline of 1984, we’re introduced to Brooke (Emma Roberts), Montana (Billie Lourd), Xavier (Cody Fern), Ray (DeRon Horton), and Chet (Gus Kenworthy). Brooke is new to LA, but Montana instantly latches onto her and introduces her to the other friends. Montana and her crew are heading to Camp Redwood to be counselors. At first, Brook is reluctant to join, wishing instead to take classes to become a veterinary assistant. However, a brush with death in the form of real-life serial killer Richard Ramirez motivates Brooke to join her friends and get out of town. When they stop for gas, the station attendant (Don Swayze) warns them to stay away from Redwood, or they’ll die. Xavier, too focused on rolling a joint to watch the road, hits a pedestrian and they decide to take him to camp as well. At camp, they meet colorful characters including Margaret (Leslie Grossman), the owner, a survivor of the original massacre and resident Bible-thumper. Camp nurse Rita (Anjelica Ross) tells the counselors the story of Mr. Jingles, but Margaret is quick to cut in, take everyone’s alcohol away, and regale them with her version of events.

The crash victim wakes up and finds that he’s missing an ear. Brooke goes to check on him, and he says that something terrible will happen if they don’t leave. She discusses this with Montana et al. when well-endowed fellow counselor Trevor (Matthew Morrison) comes in. He turns out to be a minor celebrity, and Montana is quick to sleep with him. The episode cuts to a mental hospital that Mr. Jingles escaped from 3 hours prior. Naturally, they’re on high alert. Meanwhile, Mr. Jingles kills the gas station attendant and takes his keys. Back at camp, Brooke sees that the hiker has indeed been killed and hears keys jingling. This leads to a good old-fashioned chase scene replete with hilariously ridiculous clumsiness on Brooke’s part. She makes it, but with Mr. Jingles nowhere to be found, nobody believes her. She goes outside to answer a ringing payphone as Ramirez is seen in the background.

Despite not being very big on horror cinema and TV, American Horror Story has surprisingly become one of my favorite shows. Ryan Murphy always assembles impressive casts for his TV shows if nothing else, and I love the changing themes for each season. I’ve come to think of the start of a new AHS season as the kickoff of the Halloween season. I really like the opening credits for 1984 and, unlike some fans, the lack of original cast members this season doesn’t really bother me. For a long time Sarah Paulson, Jessica Lange, and Evan Peters got most of the glory, and I think it’s good to mix things up. I also think it’s a great idea to go back to basics with this slasher-inspired season after the colossal, world-threatening events of last year’s Apocalypse. 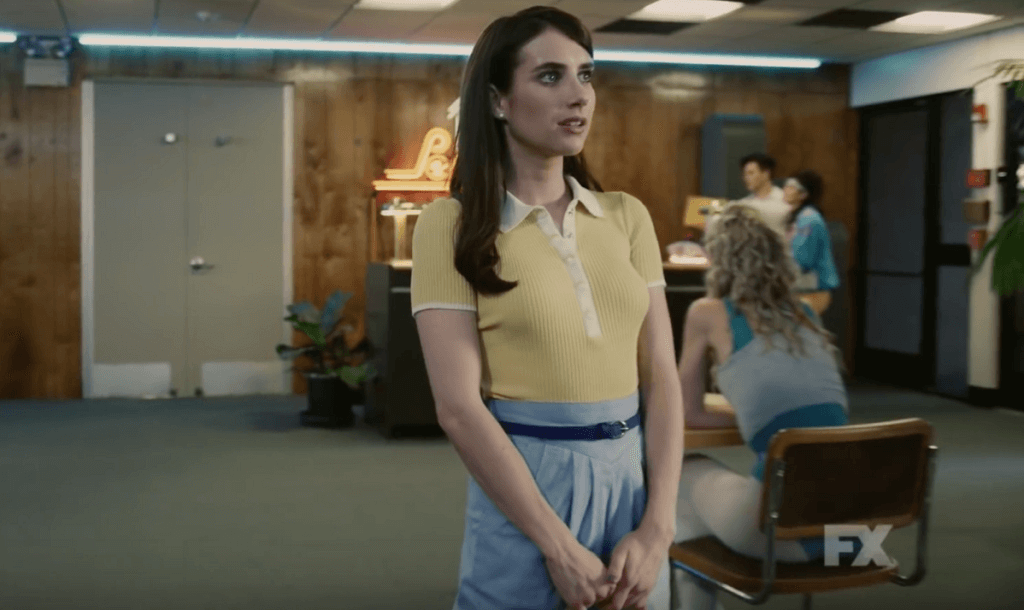 I really like Emma Roberts as Brooke, and it’s nice of the showrunners to give her a different kind of character after multiple seasons as a witch (both literally and/or figuratively). Billie Lourd is also quite funny as Montana, and I like the blossoming friendship between the two. However, I can’t help feeling that, as Montana is a promiscuous, beautiful young woman, she’ll be one of the first to die. Matthew Morrison’s Trevor is equal parts funny, charming, and cringe-inducing, but it’s very tongue-in-cheek, and he seems to be having a lot of fun with the role. His shared scenes with Montana in “Camp Redwood” are really funny. I don’t have any strong feelings on Ray yet, but like Montana, if 1984 really sticks to slasher tropes, he may not be long for this world. Chet is a total jerk, to the point that you wonder why the others even want to be his friend. I really enjoyed Cody Fern’s performance last year as Michael Langdon, and so far I’m intrigued by his new character Xavier. Between AHS and American Crime Story, he’s certainly shown a good deal of versatility. Although his role was brief and ended tragically, I really liked Don Swayze as the gas station worker. It was downright chilling the way he told Xavier they would all die if they continued to camp. I appreciate little details like Xavier’s emulation of George Michael. In fact, so far the costuming and makeup is great in general. The musical selections in “Camp Redwood” are excellent; songs from Bananarama, Hall and Oates, Def Leppard, and others can be heard throughout the episode. 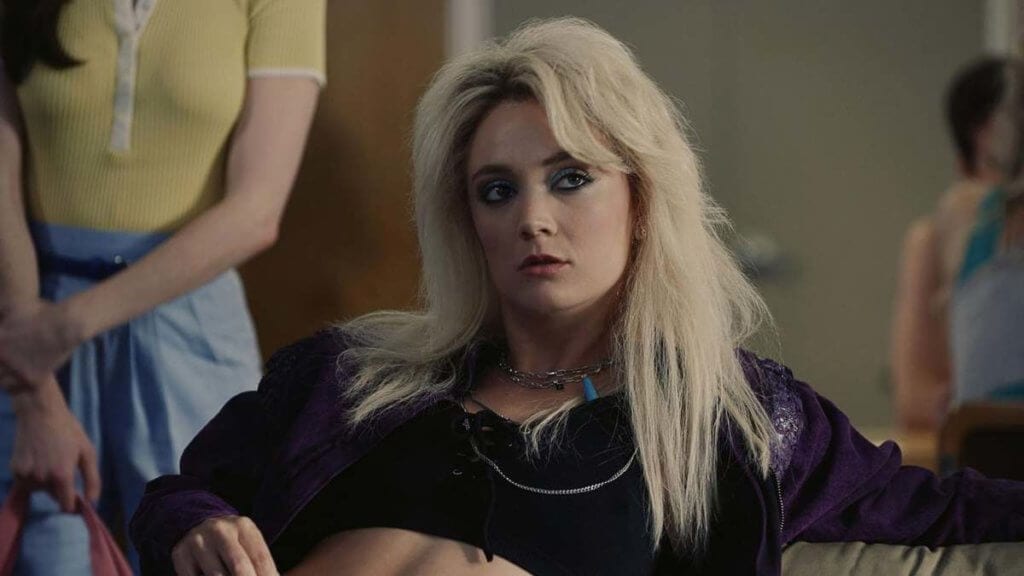 As usual for the series, dialogue in “Camp Redwood” varies from chilling to hysterical. The cinematography in the episode is nothing life-altering, but it’s competently done. At times I had trouble hearing what the characters were saying, whereas action or chase scenes were too loud. This is actually a problem I have had a lot lately with both movies and TV. It can also be harder to see what’s going on in the darker scenes throughout the episode, but this can actually be a good thing, adding to the overall mystery of Mr. Jingles and Camp Redwood. I’m sure there will be lots of plot twists before the season ends. Personally, I think Margaret may be the real killer, or at least involved in the killing with Mr. Jingles. Her devout faith could even support this; perhaps she seeks to punish promiscuous, drug-smoking young people.

Overall, while “Camp Redwood” doesn’t reach the heights of the best American Horror Story season premieres, it is very effective in its own right. I like that they’re going smaller with this season’s setting, and most of the primary characters are enjoyable, either genuinely or for how dumb they are. I look forward to following the rest of 1984 and can’t wait to find out what’s going on.

American Horror Story has had bigger and better season openers than "Camp Redwood," but this episode serves its intended purposes well.