REVIEW: American Horror Story – Season 9, Episodes 7 and 8, “The Lady in White” and “Rest in Pieces”

“The Lady in White” begins in 1948 with a woman named Lavinia (Lily Rabe), a camp cook, and her two sons. They ask her if they can go swimming, and she allows it, telling the older Benjamin to watch over the younger Bobby. Tragedy strikes as Bobby is hit by a boat engine. Lavinia blames both Benjamin and the lifeguard for her loss, screaming that they’ll all pay. Back in the present, Donna brings Brooke to a hotel room and nurses her back to health against her will. Brooke sees a newspaper story about Margaret’s concert at Redwood and vows revenge. Donna treats her to a day at the roller skating rink, but Brooke insists that they return to Redwood. A man named Bruce (Dylan McDermott) asks to hitch a ride. He starts telling them about a highway killer, and Brooke tells him to get out. A highway patrol officer pulls up and asks them if everything’s OK. Bruce kills him, and the two women drive off, leaving Bruce behind. Back at Camp Redwood, Mr. Jingles (aka Benjamin) comes across the ghosts of the Jingles impersonators. They attack him but don’t kill him; Montana has commanded that there be no killings until the festival. They bring him to the other ghosts, and he’s told about another spirit, a woman in a white nightgown. Benjamin reveals that it’s his mother, terrorizing everyone at the camp because of what happened to Bobby. She attacked Benjamin with a butcher’s knife, and he was forced to kill her to save his own life. He asks where his mother is, and Montana orders Xavier to take him. Once he’s faced with his mother, Lavinia, Benjamin asks if Bobby’s here too. She scolds him for speaking the name. She divulges that she gave Margaret the “push” to commit the massacre. Meanwhile, Donna and Brooke’s car is struck by Bruce in the police car. When Brooke wakes up, Bruce has Donna tied to the vehicle lying on the highway. He tells Brooke she can either put the car in drive or be shot herself, and Bruce will drive and drag Donna. She puts the car in reverse and shoots Bruce with his own gun. At Redwood, Trevor catches sight of Montana as the bands start arriving. He follows her, and they make out. Meanwhile, Brooke ties Bruce to a utility pole and cuts his thumbs off. Richard Ramirez kills the lead singer of Kajagoogoo. Benjamin tells his mother that he has to face Ramirez to protect his son, who is named after Bobby. She tells him to kill himself and become a ghost rather than allow Ramirez to destroy his soul. He plunges the knife into his gut and emerges a spirit.

“Rest in Pieces” opens with Donna and Brooke having lunch and discussing their lives after their business with Margaret is over. Another woman comes up and starts talking to the duo, remarking that Brooke looks like Brooke Thompson, the girl executed for the killings at the camp. Meanwhile, Bruce comes across the hitchhiker and offers him a ride to Redwood. He accepts, but soon hears banging from within the trunk. A flashback to the previous night shows Bruce choking a woman who tried to save him from the situation Brooke left him in. In the present, he opens the trunk and kills her. Margaret finds out about the dead musicians and isn’t happy, ordering her assistant to clean it up and hide the evidence. To his shock, he finds the band’s ghost performing. Richard Ramirez is tackled by Jingles, who says Ramirez should never have gone after his family. However, before the two can really get into it, Bruce runs over Jingles. This prompts the latter to run away, much to Richard’s disappointment. Bruce shows the corpse in his truck to Richard, and the two decide to join forces. The woman from the diner knocks on Donna and Brooke’s door, saying she’s a reporter and knows who they are. They offer to tell her everything if she can sneak them into the festival to get revenge on Margaret. Meanwhile, back at camp, Trevor pledges his love for Montana and offers to stay with her forever. Richard tells Bruce all about what went down with Jingles, and Xavier takes them to Jingles’ corpse. Jingles’ ghost comes and attacks Richard, but Margaret “kills” him again. At Camp Redwood, when a spirit is “killed,” they simply re-spawn. Jingles is strung up as Xavier, Montana, and the rest seek revenge on him. The reporter is killed by Bruce and Richard. Montana tells Trevor she doesn’t want him, and he shouldn’t stay. The Jingles impersonators stab the real Mr. Jingles repeatedly and push him out into the water on a boat. He’s grabbed by a body and dragged into the water, and soon finds himself with his mother and brother at a picnic. He can choose to stay and be happy with them or try and return to save his son. 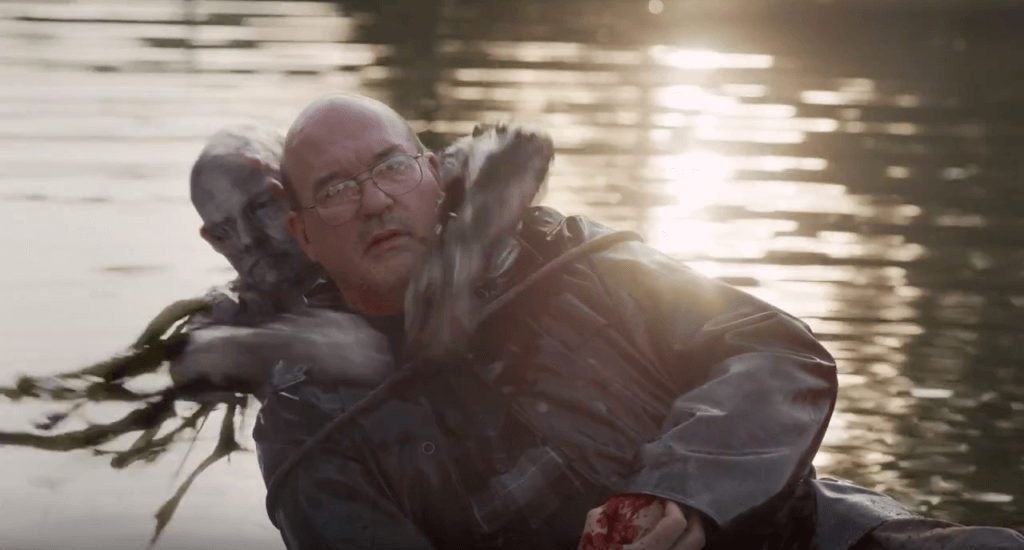 “The Lady in White” is an excellent episode, and I think longtime fans of the series will be thrilled with it. It sees the return of former cast members Lily Rabe and Dylan McDermott, gives us more backstory on Mr. Jingles, and gives Brooke ample opportunity to show what a badass she really is. I love the flashbacks with Lavinia and her sons. They’re very atmospheric, and it’s definitely an interesting twist to see that the camp’s problems stem back to long before the 1970 massacre. Lily Rabe is transcendent as Lavinia, equal parts maternal, bitter, loving, and intimidating. It feels like beating a dead horse to praise John Carroll Lynch’s performance as Benjamin/Jingles at this point, but he’s just that good. He’s essentially had to play two entirely different characters this season, and I can’t believe how sympathetic Benjamin is after everything that’s happened. However, for everything he’s been through, he comes out every bit as pitiful as Brooke, if not more. I’m extremely interested in Lavinia’s reveal that she persuaded Margaret to kill the counselors years ago, and I can’t wait to see if anything comes of that with her. The plot thread with Benjamin’s family is my favorite throughout these two episodes, and I just hope he can find a way to save his son. 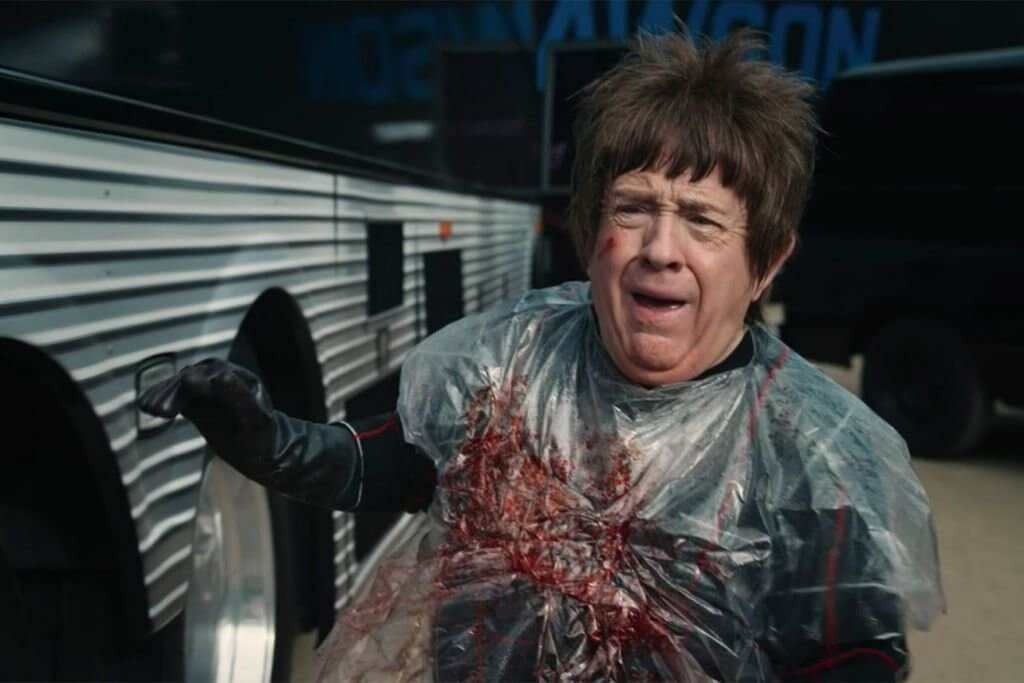 As for Brooke and Donna, I love this partnership. Every twist and turn with Donna has been a trip, but she’s finally on a path we can understand and root for. Her little speech to Brooke about being the “final girl” and what it means was cute, if a bit on-the-nose. I also liked it later when Brooke said they would both be final girls. That may be a little optimistic for this show, but that would be a sweet ending. While I always like to see original cast members cameo, I’m not really seeing the point of Bruce as a character. While Lily Rabe turns in a stunning performance that informs the story and other characters, Dylan McDermott is just kind of there as Bruce. He lifts right out of the story, to the extent that one wonders if they wrote this role just to cast him. But why introduce a new character in the season’s last three episodes if he’s not going to be significant? I hope he contributes more in the finale, but I’m concerned. As an aside, I hated the reporter character, and it was hilarious when the killers tag-teamed her. Classic. 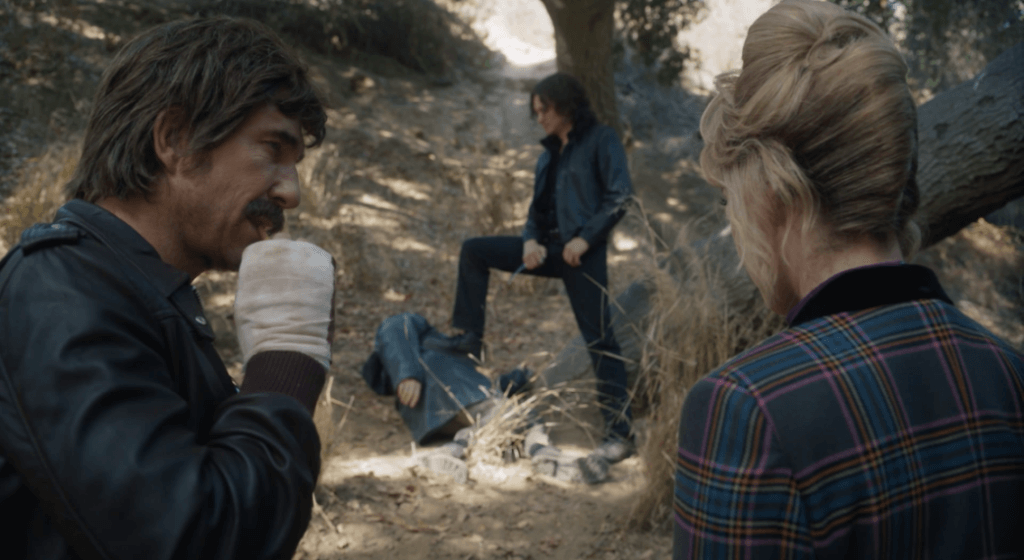 I feel like, along with John Carroll Lynch, Leslie Grossman is something of an unsung hero this season. Zach Villa is getting a lot of praise as the Nightstalker, and rightfully so. But Grossman is so over-the-top as Margaret, the killer-turned-millionaire. She’s tasked with delivering insane lines like “Kaja-f@#$%^g-Googoo is dead” with a straight face and nails it every time. She’s funny, intimidating, and, at times, absolutely nuts, and I love every minute of it. She doesn’t interact with Trevor a whole lot in “The Lady in White” or “Rest in Pieces,” though I found his scenes with Montana interesting. It seemed at first like she was going to accept his offer to stay together forever, although now she seems intent on pushing him away. It’ll be interesting to see where this goes in the finale, as well as how Xavier takes it.

Overall, I think “The Lady in White” and “Rest in Pieces” are good episodes. We get lots of backstory on Benjamin’s family, Brooke’s righteous determination for vengeance, and lots of gorgeous visuals. The musical choices continue to shine, as do the over-the-top 80’s costumes.  I’m confused about the plot function of Bruce, but hopefully, next week will reveal all.

American Horror Story – "The Lady in White" and "Rest in Pieces"

"The Lady in White" and "Rest in Pieces" are really good episodes. They're funny, emotional, and extremely well acted.