REVIEW: Amphibia Season 3, Episode 14, “The Root of Evil; The Core and the King” 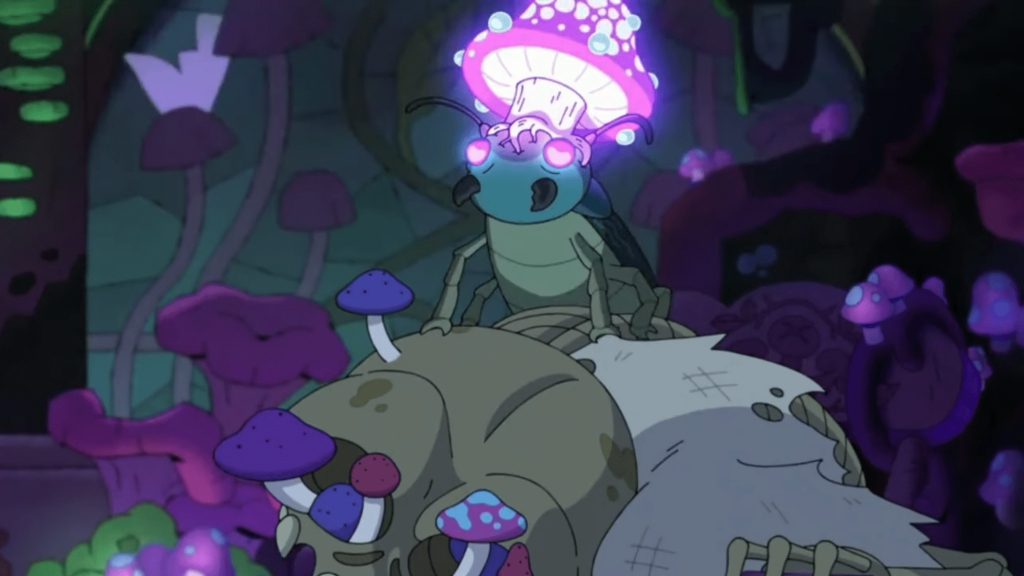 “The Root of Evil” finds Anne and the Plantars recruiting for the resistance, Anne succeeding more than Hop Pop. After their cart crashes, they wake up in a strange land called Gardenton. In Gardenton, everyone loves nature and horticulture as much as Hop Pop, and he sets out to recruit them for the resistance. This proves problematic when their leader turns out to be Apothecary Gary. The Gardentonians are surrounded by King Andrias’ Forces thanks to a tracker planted on the Plantars’ cart. The Plantars decide to help them, and after a surprisingly civil conversation, Gary pledges to help the resistance. “The Core and the Core” opens with King Andrias meeting with the Core, the monster possessing Marcy. They discuss erasing Marcy’s memories which prompts Andrias to look back on his past. Andrias once had a frog friend named Leaf and a toad named Barrel. His father, the King, introduces him to the Core and encourages him to ditch his friends. Andrias initially remains loyal to Leaf and Barrel, but things go sideways when Leaf makes a direct plea to the King to stop using the interdimensional music box. The King rejects this notion and dubs Leaf a traitor. Andrias defends Leaf, insisting that she isn’t an enemy, just a concerned citizen. However, Leaf steals the music box and key, running away as Barrel and Andrias chase her. She escapes, pledging to take the box somewhere safe. King Aldrich tells Andrias he can’t do anything to atone for his mistakes until the box returns. Andrias plans to keep frogs in line and banishes Barrel to the outskirts, finally disposing of his friendships as his father suggested earlier. In the present, from within the Core, Aldrich tells Andrias he’s almost proud of him. 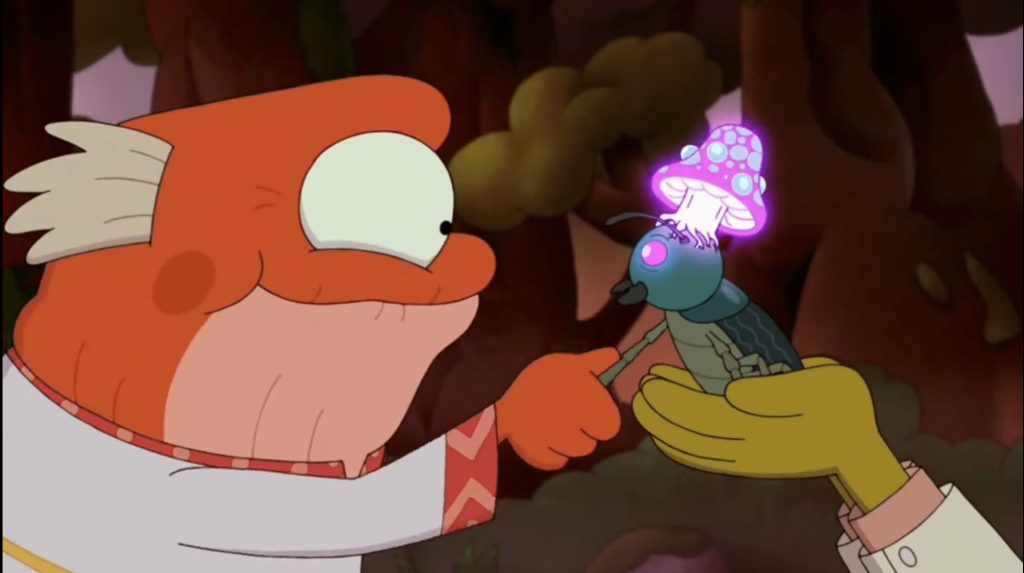 “The Root of Evil” is the second episode in a row to give Hop Pop the spotlight as he gets his chance to bolster the rebellion’s ranks. I like the creepy vibe of Gardenton. The music, lighting, and camera angles make it clear immediately that Anne and her friends are in an unsafe environment. Creator Matt Braly and his crew clearly had fun conceptualizing and designing this town; references to Midsommar and The Wicker Man abound. It’s particularly creepy when the people of Gardenton reveal their spores, simultaneously chanting “perfect harmony.” Season 3 continues to tie everything together from prior seasons, reintroducing Apothecary Gary and showing what he can do with willing followers and turning him into an ally. This is another minor villain I had nearly forgotten about, like Barry the Candyman; clearly, I need to rewatch the other seasons. “The Root of Evil” also reveals that Andrias is likely working with a spore like Gary to enslave the wildlife in Amphibia; maybe Gary could be the key to stopping that.

I wish “The Root of Evil” could have been a full-length episode to let the unsettling vibe and mystery marinate a little longer before revealing Gary. Then, his unmasking, the battle, and the ultimate union of the former enemies also could have had more time to breathe. As is, this is a fun episode and probably a good one to watch around Halloween. But sometimes, I can’t help but wish these episodes had more than 11 minutes to tell their stories. The scene where Loggle accidentally crushes a flower and the Gardentonians revive it is a great example of what I mean. This is creepy and mysterious, and I can’t help thinking that being left to ponder these events a little longer would have enhanced the whole episode. The people cry and wail over the crushed flower only to immediately grow it back; extra time would have helped here. 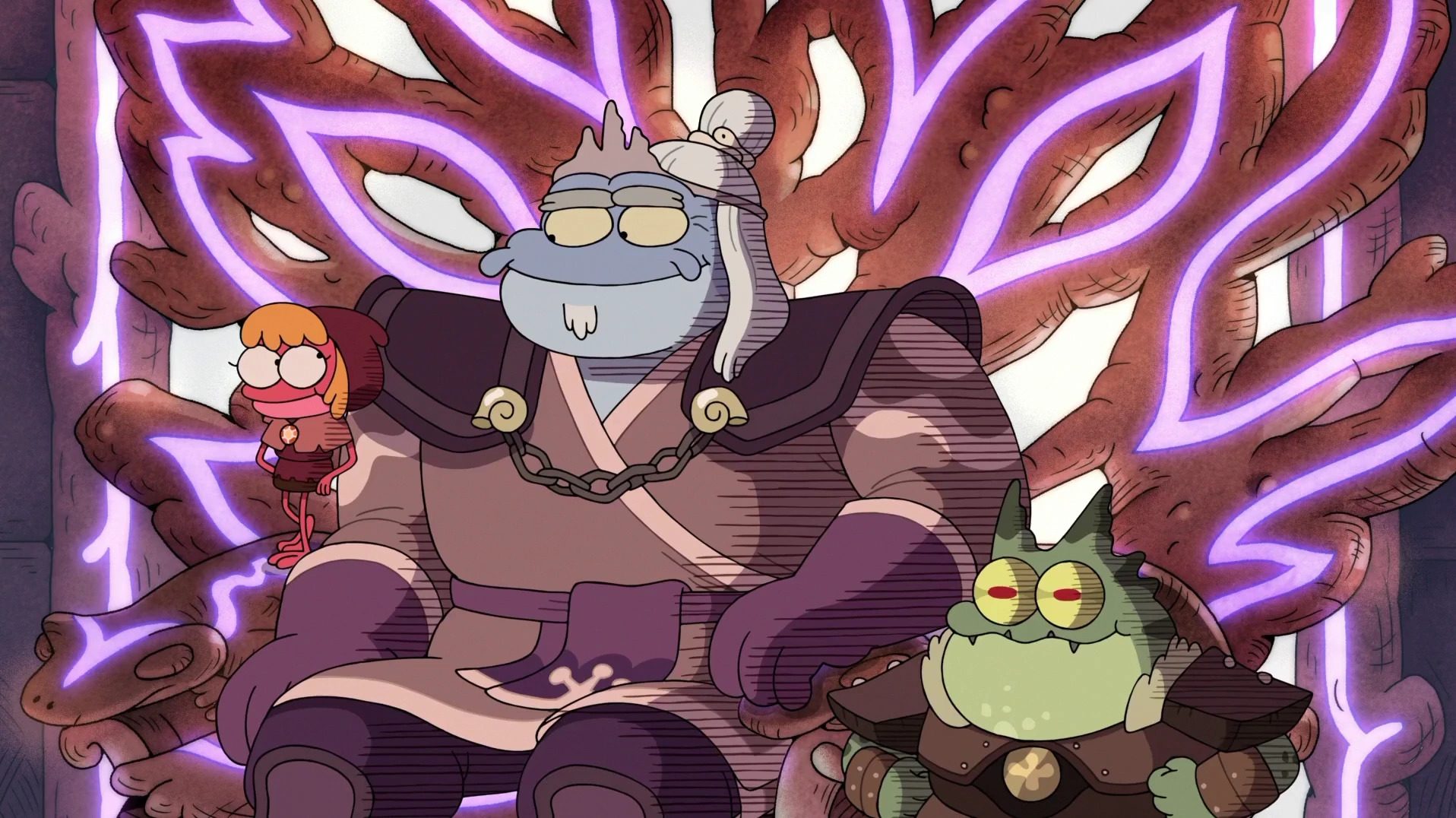 “The Core and the King” is precisely what Amphibia needed, a glimpse into King Andrias’ past and true feelings. Andrias has shown concern for Marcy before, but there’s a lot of regret and guilt packed into his expression when he asks the Core if Marcy is still in there. I love the visual of the torn painting; it’s dramatic, mysterious, and reminded me of the Prince’s torn portrait in Beauty and the Beast. It serves as a great transition into his flashbacks with his friends. By the way, is anyone else pretty sure Leaf is Sprig and Polly’s ancestor? She’s the same color as them, has red hair like Sprig(and Hop Pop in his day,) and moves just like Sprig. She even does a dance that looks very much like Sprig when he plays. This would explain why Hop Pop knew to hide the music box when Anne showed it to him. It would also entrench the Plantar family even more firmly in the destiny of their homeworld. With his father, King Aldrich, we also learn that Andrias does many things to live up to his family’s standards. “The Core and the King” does a lot of heavy lifting with one of my favorite characters in a short amount of time. The episode shows that he was once a tender-hearted young man who wanted to make others happy. He tried to protect his friends and impress his father, two goals that were never compatible. 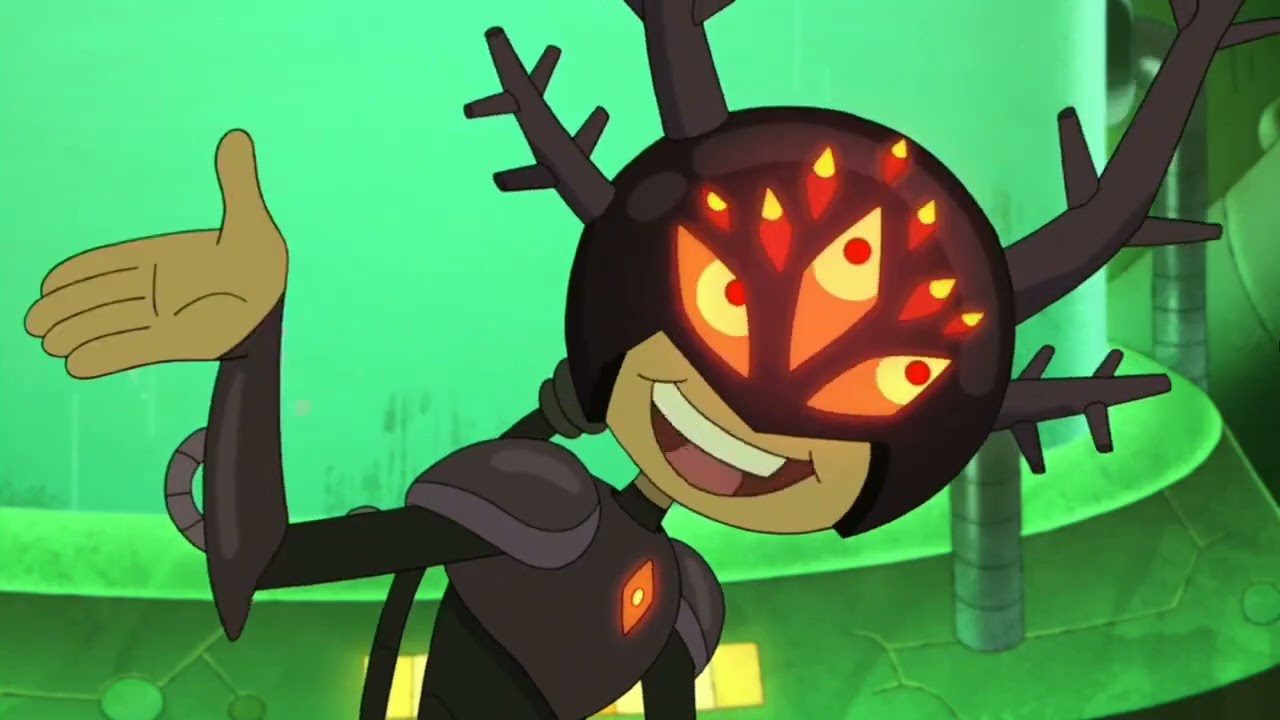 I’ve made this reference before with this show, but I also thought of Avatar’s Prince Zuko a lot during this episode. Andrias wants to do what’s best for everyone but simply isn’t capable of going against his father’s wishes. King Aldrich’s talk of Amphibia being destined to conquer other lands is also reminiscent of Fire Nation leadership. Firelord Sozin also started a war for that exact reason. Sozin talked of spreading the Nation’s prosperity, while Aldrich is open about the fact that he sees his land and family as superior, as worthy of overrunning other worlds. William Houston is excellent in the role of King Aldrich, intimidating and creepy most of the time but tender enough to manipulate his son with talk of expectations and familial pride.

REVIEW: Amphibia Season 3, Episode 14, "The Root of Evil; The Core and the King"

"The Root of Evil" feels a tad rushed to me, but "The Core and the King" is pitch-perfect. Keith David's King Andrias is one of my favorite characters on Amphibia, and I appreciate getting so much insight into his choices and beliefs. "The Root of Evil" is creepy, well-animated, and a ton of fun, but "The Core and the King" is something exceptional. It simultaneously compels you to sympathize with Andrias and condemn his actions even more.

And I thought you’d mention Encanto with Andrias’ case. I also think this reminds me too of Namaari’s case with her mother and her expectations. How is it that this in Amphibia seems to work and yet there’s too many problems with Encanto and Raya? I still don’t quite understand the hate on these tropes which seem to be classic. I get we want some new things and I do too, but sooner or later everything could become a trope and then no one’s going to know what they want.