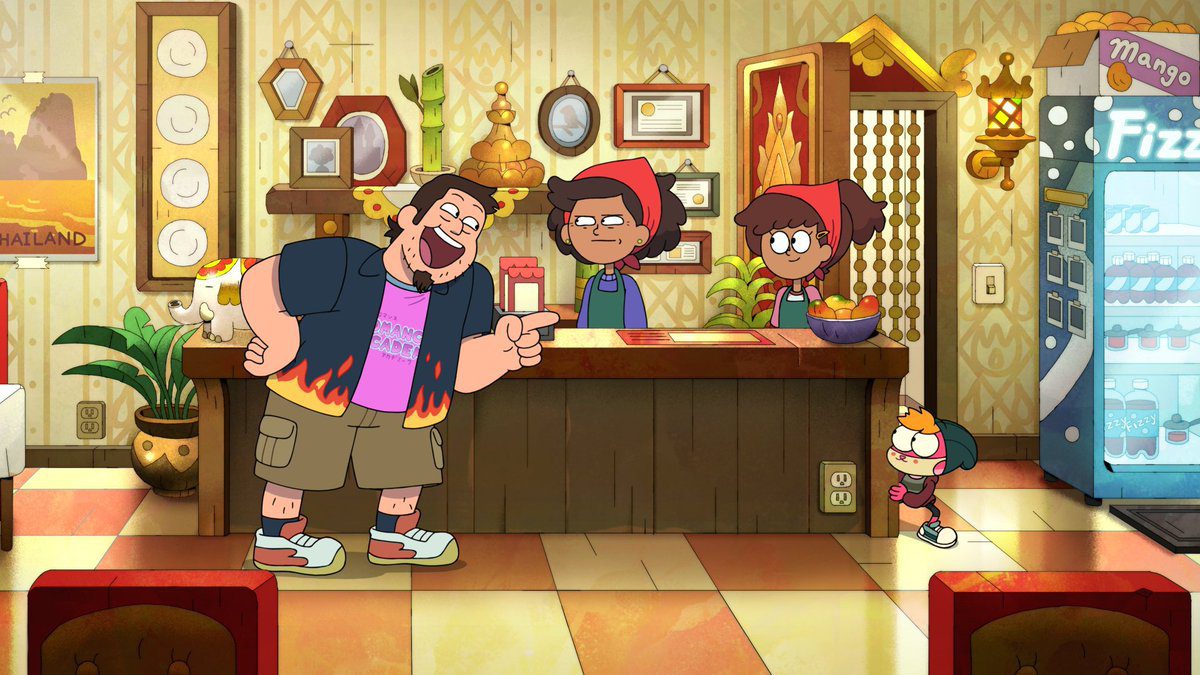 “Thai Feud” is a Sprig-centric episode centering on his desire to be part of the Boonchuy family. When Anne goes with her mom to work at the family’s Thai restaurant, Sprig tags along to ingratiate himself. Anne’s mom just wants Sprig to stay out of trouble, but their #1 customer, Ned (Wayne Knight), presents the opportunity Sprig needs. Ned wants the Boonchuy family recipes for his food truck and is actually hurting their business by parking in front of the restaurant. Sprig steals the van and, through a wacky series of events, gets accepted into Anne’s family. Anne’s mom also decides to hire Ned to deliver the restaurant’s food. “Adventures in Cat-Sitting” sees the Plantars volunteer to take Anne’s cat Domino to the vet when she has a conflicting dental appointment. Hop Pop feels like he and the kids are a burden on Anne’s parents and offers to take care of the errand to make amends. They struggle to get Domino to the vet, and after the appointment, things go wrong when she escapes from her carrier. They find and recapture her at a shawarma restaurant. The Plantars are ultimately forced to call Anne’s dad for a ride home, and he assures Hop Pop that after taking care of Anne for 5 months, the Plantars are more than welcome at the Boonchuy home. 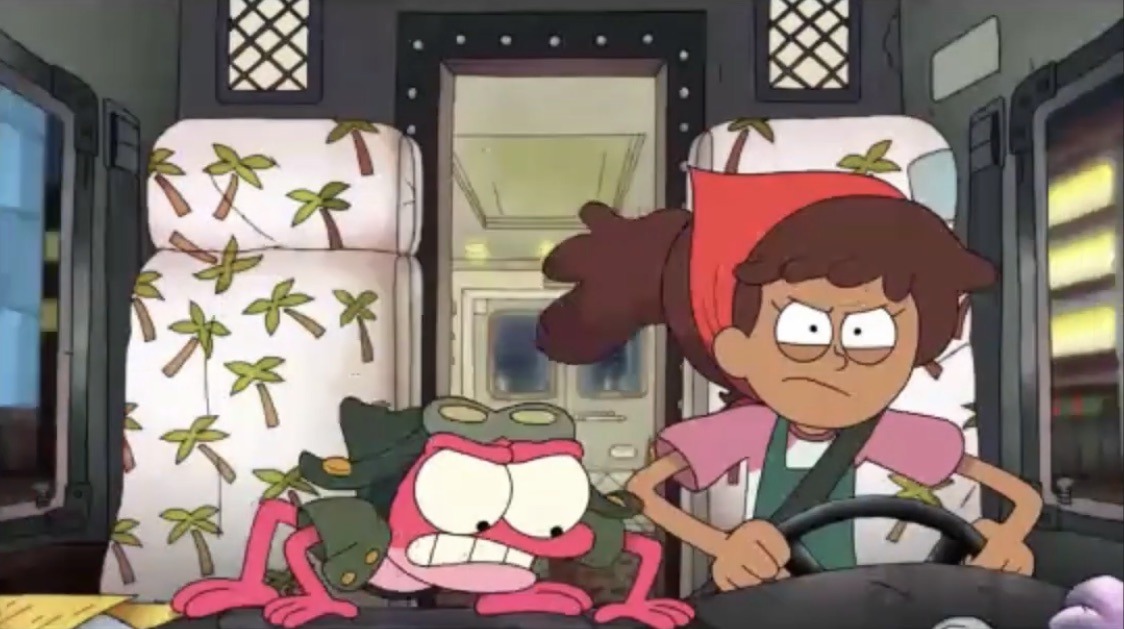 It’s fitting that “Thai Feud” and “Adventures in Cat-Sitting” are paired, since they both involve the Plantars trying to integrate more fully into the Boonchuy’s home. Sprig’s overly enthusiastic approach to impressing Anne’s mom is reminiscent of her own behavior as she got acclimated to Amphibia. Even though Amphibia features talking frogs, the character dynamics feel realistic and relatable. I like how Anne’s mom blames her for any and all of Sprig’s misbehaviors because he’s just a guest and she’s family. I don’t like his reaction to this reasoning, though. I know Sprig is just a kid, but bursting into tears at the very suggestion that Anne’s mom doesn’t consider him like family is crazy. I also find it odd that this happens twice in the episode, and Anne doesn’t address either Sprig’s overreacting or his feelings themselves. A single line of dialogue about how she still sees him as family would have gone a long way. 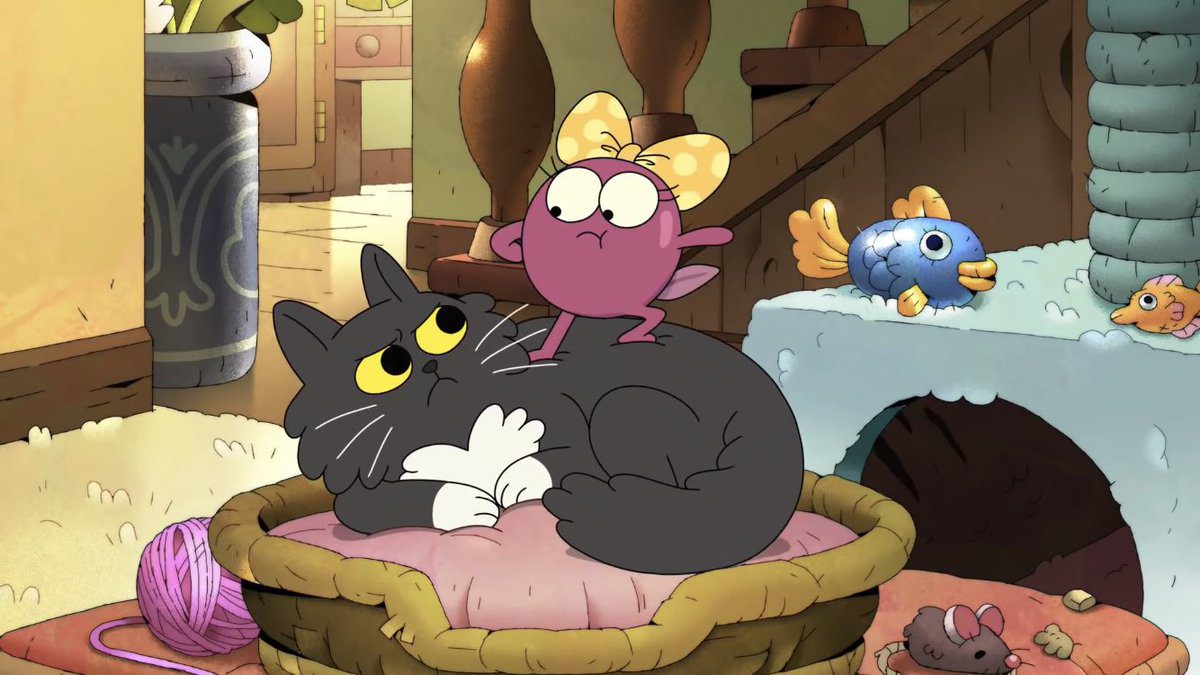 This makes the pushy nature of Ned’s actions and Anne’s mom’s choice to hire him even more puzzling. Ned isn’t a kid; he’s a very persistent grown man who won’t take no for an answer. While Sprig was acting irrationally, I think Ned’s age and the professional implications of his actions are worse. When he breaks down and says that trying to get the family’s recipes was appropriating their culture, I cringed. This seems like too much of a wink to the camera. Normal people don’t talk like this. Furthermore, someone who wanted to exploit a foreign culture for profit probably wouldn’t describe themselves in this way. I know this is all meant to be funny and not taken this literally, so I may be nitpicking. This was intended as a happy ending with a compromise. Ned can’t have the recipes, but he can work for his favorite restaurant. But the characters are what I like about Amphibia more than the jokes or animation, so I find this disappointing. It feels a little too silly and removed from reality for my taste. If Amphibia was a straight comedy, that would be one thing, but this is a serious show about real problems when it wants to be. Jokes about appropriating Thai culture are just distracting and not what I came for. That being said, the episode was fun. I don’t want it to sound like I hate “Thai Feud” because I don’t. I like the title, Anne’s parts, and the dynamic among her family and the Plantars. I just think they tried too hard with the jokes here and ultimately missed more often than not. 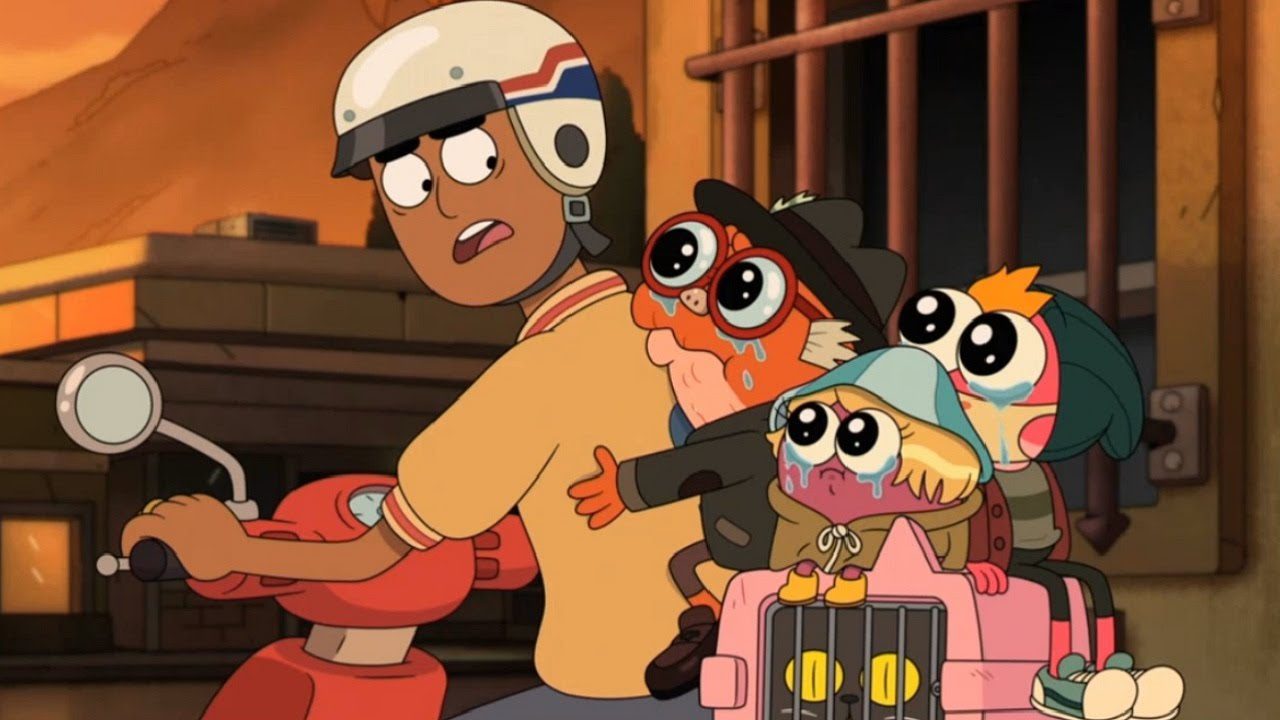 As an aside, I wonder if Wayne Knight playing a character named Ned was a reference to his role as Nedry in Jurassic Park. I may be reaching, but that’s the first thing that came to mind when Ned was introduced. Amphibia frequently makes reference to other shows, games, and films in the background, so I wouldn’t be shocked if this was their intent. There’s also a dog in the vet’s office in “Adventures in Cat-Sitting” that looks just like Scud from Toy Story. I’m sure this was intentional.

I like “Adventures in Cat-Sitting” better overall. I figured an episode would feature Domino sooner than later, and they delivered. As an owner of multiple cats, I found this episode highly relatable. My cats also go into attack mode when it’s time to crate them for a vet visit, love anything that looks like yarn, and eat anything they can get. I think this will be a big episode with pet owners in general. At the very end, Anne comes home doped up on pain medicine. She says Domino is the alpha and omega, the end all, be all of the universe. That’s definitely a mood. I think cat people do worship our fluffy murder demons in a way. Hop Pop’s attempts to win over Anne’s parents are much less annoying. I guess that’s par for the course since he’s an adult and understands the Boonchuy’s position as hosts better. Domino is hilarious throughout “Adventures in Cat-Sitting,” and I especially like Polly’s interactions with her. 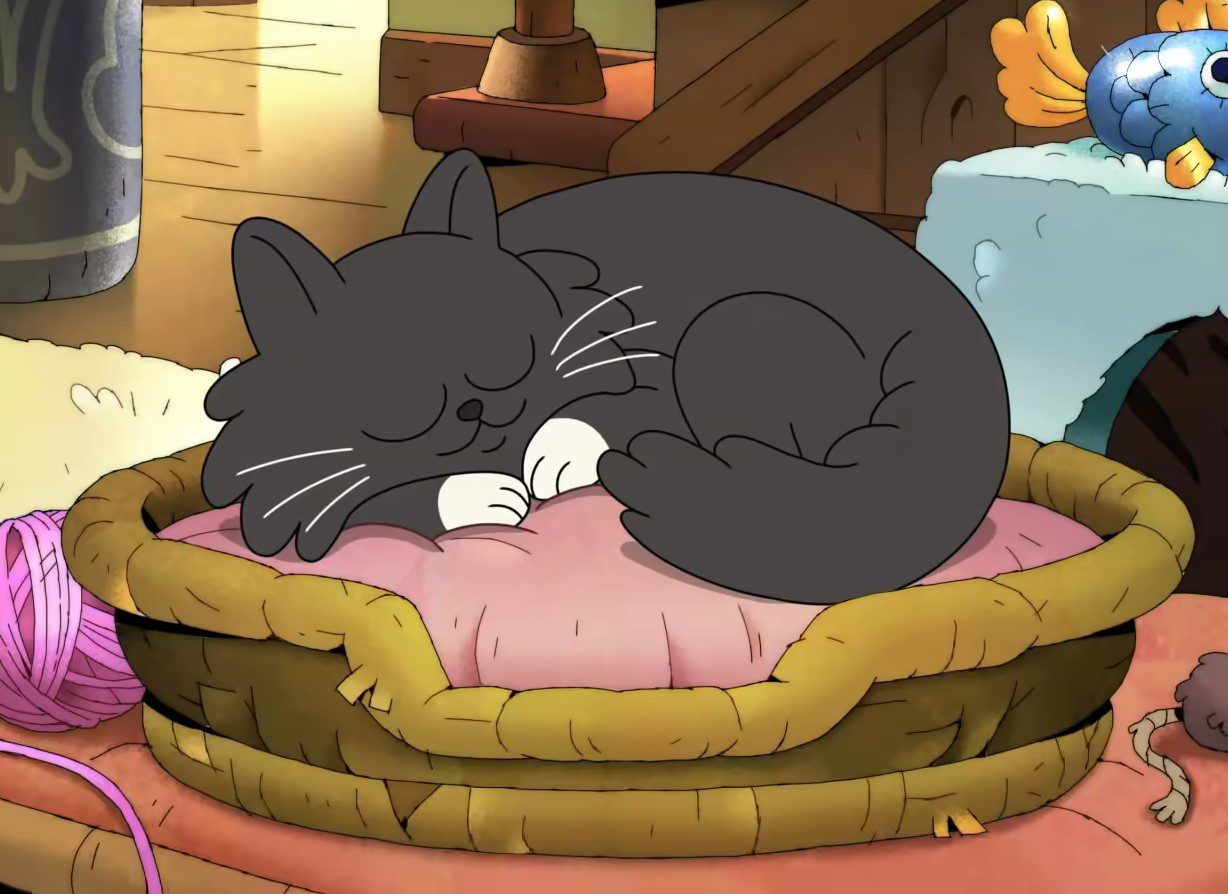 “Thai Feud” and “Adventures in Cat-Sitting” are decent episodes of Amphibia. I think they may have been better served as individual full-length episodes, especially “Thai Feud,” which feels rushed overall. The jokes are also better in “Adventures in Cat-Sitting,” although I like Anne and her mom a lot in “Thai Feud.” Ned and Sprig just baffle me in this episode, and everyone else’s response to their behavior even more so.

"Thai Feud" is a little disappointing in the comedy and character areas, but "Adventures in Cat-Sitting" fares a bit better.