"We can't do this all on our own, Anne; maybe it's time we tried trusting someone." 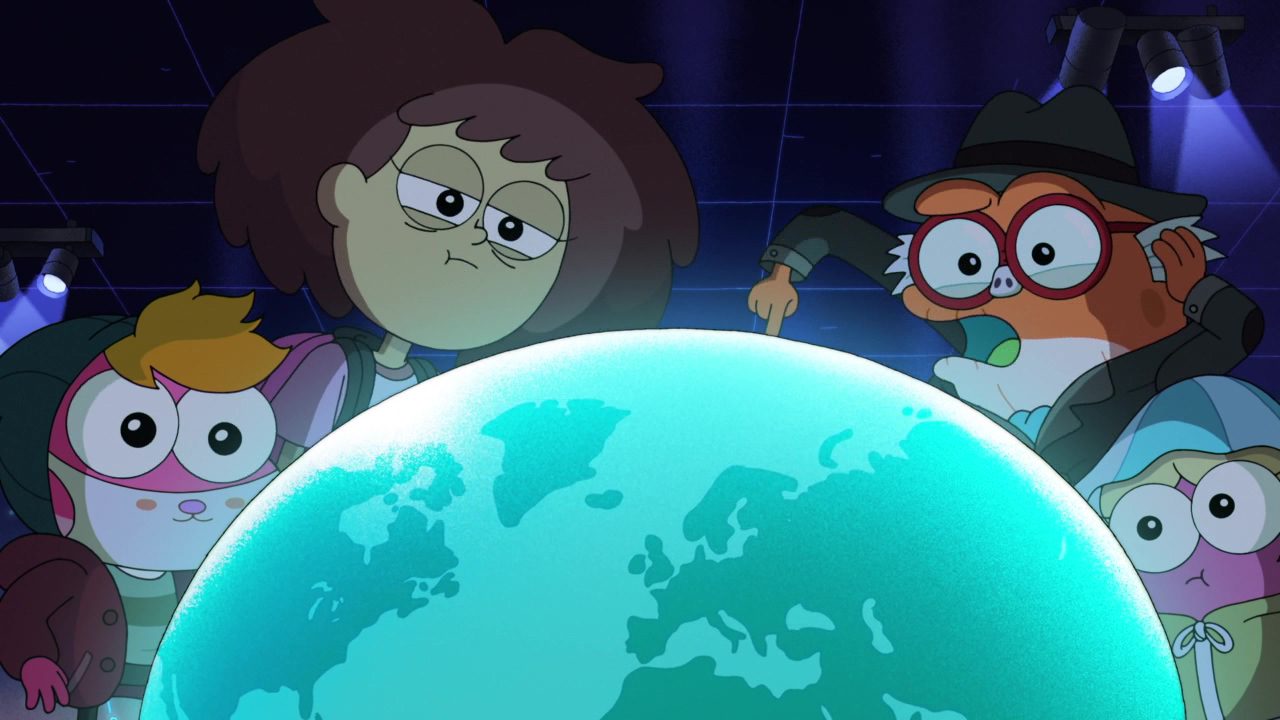 In “Fight at the Museum,” Anne stays up all night researching how to get the Plantars home. Anne’s mom sends her and the Plantars to the museum so Anne can catch up on schoolwork and mom can clean the house. At the museum, Anne finds a pot with a picture of an Amphibian frog. The group meets Dr. Jan (Anika Nani Rose), a museum curator who may know about Amphibia. Rather than ask Dr. Jan for help, Anne decides to steal the pot that night. However, as Polly obtains the artifact, the party is attacked by King Andrias’ robot. Dr. Jan and the museum’s guards walk in on the altercation, but Jan decides to help Anne and cover with the guards. Later, Dr. Jan finds mysterious writing on the pot. In “Temple Frogs,” Dr. Jan texts Anne about the inscription, but she and the Plantars are stopped in their tracks when her mom wants them to load the car. Anne’s mom makes her go to the Thai temple with her. Hop Pop, Sprig, and Polly get sucked into various activities as Anne plots an escape. Anne’s mom convinces her to stay by telling her how the community helped while she was missing. Anne is attacked by Andrias’ drones, and everyone works together to destroy them. The Plantars’ costumes fall off, but the Thai community embraces them. Dr. Jan arrives, and Anne uses Marcy’s diary to decode the writing, but the translation doesn’t make sense. The first thing that stands out about “Fight at the Museum” is Anika Noni Rose as Dr. Jan. Rose is a respected stage actress who’s also appeared in numerous movies and TV series. However, she’s perhaps best known for voicing Princess Tiana in Princess and the Frog. Dr. Jan’s hair and yellow blouse even look similar to Tiana’s yellow waitress uniform. Keith David, who portrays King Andrias, played alongside Rose in Princess and the Frog as Dr. Facilier. Dr. Jan is quirky, and I really like the rapport she has with Anne. Anne initially doesn’t trust anyone enough to ask for help in finding the Plantars a way home. This is understandable after what the group has experienced over the seasons, but I love that Jan proved trustworthy. Her fascination with the frogs is adorable. I haven’t seen or heard Anika Noni Rose in much, but from what I have seen of her filmography, she’s a wonderful actress. I really enjoy her voice work, and I hope Dr. Jan will be a major player in season 3. 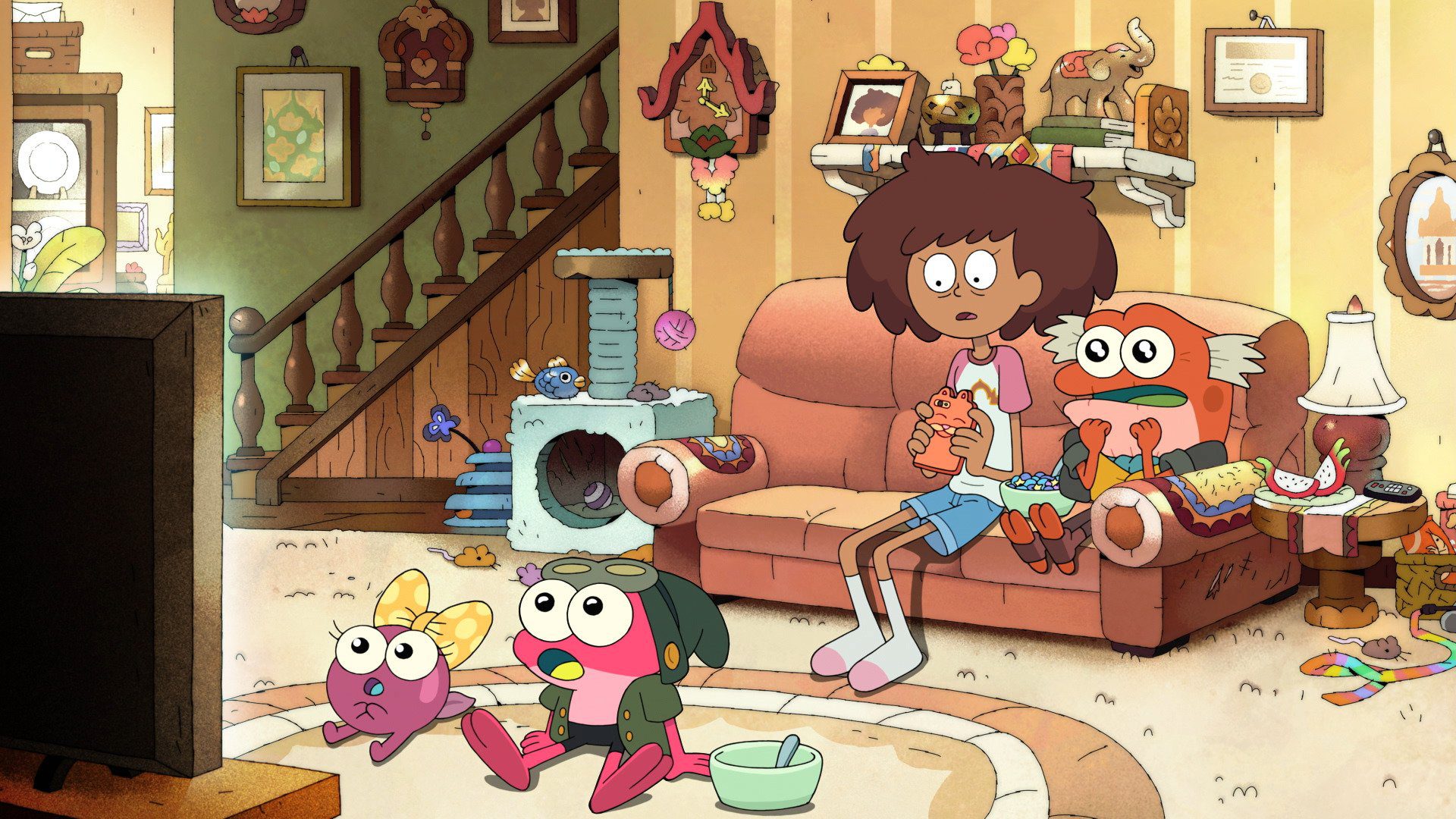 Anne is too relatable in “Fight at the Museum.” She stays up late obsessively searching the internet, neglects her own needs to help the Plantars, and ultimately struggles to stay awake once the real mission has begun. The more I talk and think about it, it seems like Anne may have anxiety. Heck, it would make sense after everything she’s been through in the previous seasons. I realize I’ve mentioned something about relatability in every episode of season 3 thus far, and I don’t mean to repeat myself. Anne is basically my spirit animal at this point. The shots of her exhausted face are a mood. It’s interesting how Anne consistently seems more focused on the task at hand than Hop Pop and the kids. They’re now the ones stranded in a strange land, but unlike Anne in the first two seasons, they’re comfortable and enjoying themselves for the most part. In “Fight at the Museum,” they even look at each other in a way that indicates they want to stay when Anne talks about finding the portal. This isn’t completely shocking since, by and large, Anne’s home is safer than Amphibia. The Plantars can also enjoy the new scenery and customs without fear of being eaten by giant bugs, a luxury Anne didn’t have in Amphibia. I imagine this may create tension between Anne and her froggy family later in the season when and if she realizes how lackadaisical they’ve become regarding going home. I don’t have much to say about the Cats reference involving Hop Pop in a cat costume, but I still think it’s worth pointing out. This caught me off guard and, while random, I found it hilarious.

“Temple Frogs” pairs well with “Fight at the Museum” as both episodes find Anne unable to relax and enjoy activities that should be a reprieve from the stress of her life. Much like the museum, the Plantars can make friends and have fun at the Thai temple while Anne remains too distracted by her (admittedly crucial) quest. Seeing the Plantars get so invested in Thai culture is really sweet. While Anne was initially grossed out and shocked by Amphibian customs, the Plantars show reverence for her heritage. This is also where Anne’s mom brings out that most feared of parental weapons, the guilt trip. It’s sweet to learn that the community pulled together in such a meaningful way to help the Boonchuys while Anne was missing. I think a flashback would have been even better; I’d have liked to see some of those interactions and generous gestures. I assume the brief exchange between Anne and her mom was chosen because of time constraints. After all, 11 minutes is not a long time to tell any story. 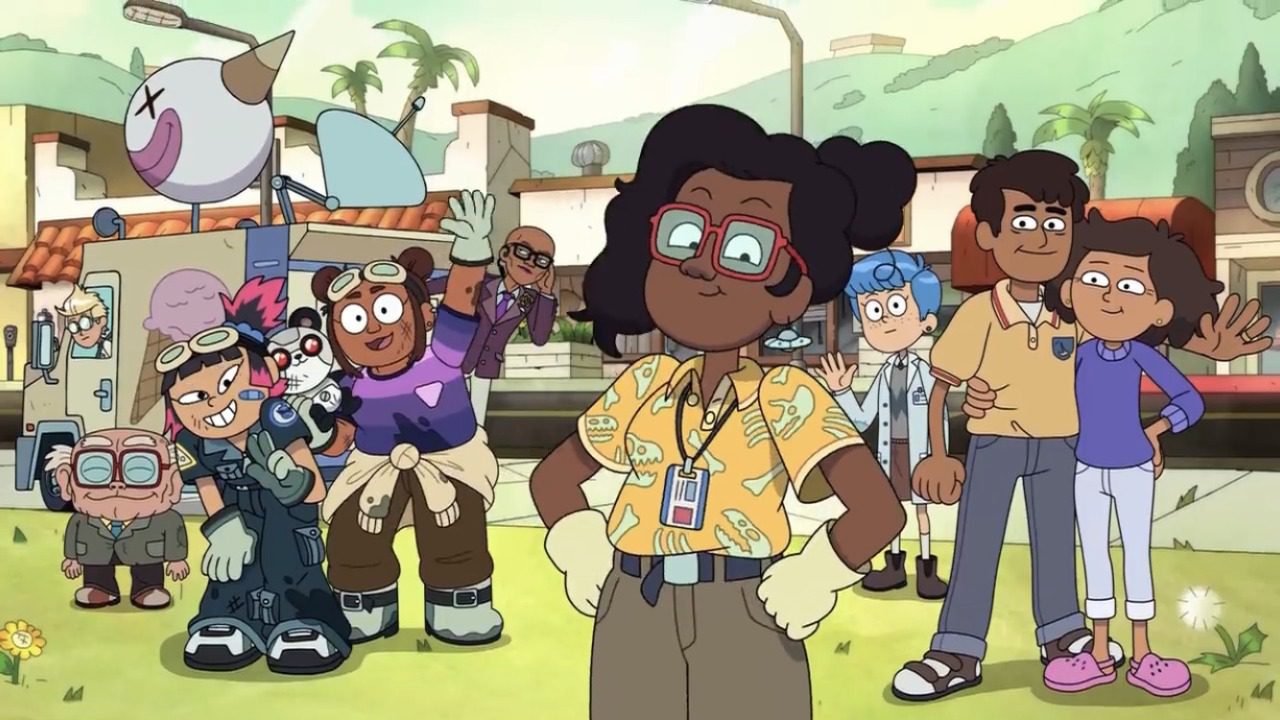 In fact, Anne’s friends and neighbors are the highlights of “Temple Frogs.” It’s genuinely heartwarming to see the community rally against the drones and accept the Plantars, no questions asked. When their faces were exposed, I was afraid we were in for a subplot about someone snitching on them to the government or something. That still may happen in a different episode. Regardless, I was delighted and surprised by the wholesome response of the humans.

“Fight at the Museum/Temple Frogs” may be my favorite episode(s) of Amphibia’s third season yet. The character interactions are great in both stories. I also like the new characters much better than those introduced in “Thai Feud/Adventures in Cat-Sitting.” Both of this week’s stories deal with trusting the people who want to help you and knowing when to kick back and take a break.

"Fight at the Museum/Temple Frogs" may be my favorite episode(s) of Amphibia's third season yet. Both of this week's stories deal with trusting the people who want to help you and knowing when to kick back and take a break.