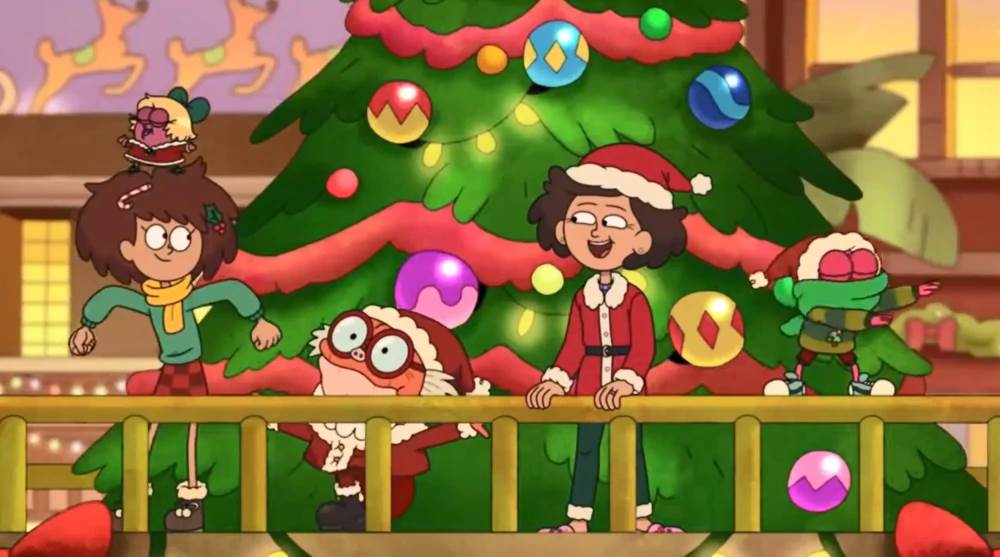 In “Froggy Little Christmas,” Mrs. Boonchuy is elated when the city offers her a spot in the annual Christmas parade. However, she feels she has to turn down the opportunity she’s dreamed of to keep a low profile for the Plantars. However, Anne sees this as her chance to give her mom the ultimate Christmas gift and starts scheming. Meanwhile, back in Amphibia, King Andrias’ minions also prepare to celebrate the human holiday Marcy told them about. They present the King with a drone as his gift, giving him the idea of sending it through the portal and hunting Anne with it. Back on Earth, Anne and the Plantars recruit some of their friends to help plan, decorate, and power the float. The float is a big hit with Anne’s parents, and all seems well until Anne’s showboating atop the float attracts Andrias’ drone. Andrias takes over a giant Santa prop in the parade, destroying several floats and attacking Anne. The Plantars and Boonchuys impale the rampaging Santa with a Christmas tree, thwarting Andrias’ plans and eliminating the drone. All ends well at the house, as Anne’s dad gets the perfect family photo, her mom had a great time at the parade, and Sprig gives Anne her Christmas gift. Anne writes anonymous letters to Sasha and Marcy’s families pledging to bring the girls home safe.

I love Christmas, so I always find holiday-themed episodes to be a treat. I wasn’t sure how they’d handle the topic of Christmas since the Boonchuys are Thai-American, and the Plantars aren’t even from Earth. Matt Braly and co. took the traditional-but-secular approach to the holiday, which I guess shouldn’t be surprising since it’s the only thing that would make sense. That’s also how I celebrate Christmas; I love Santa, Christmas trees, etc. So the Boonchuy’s style of celebration was very relatable to me, and probably to a lot of people, I imagine. I love the Christmas-isms throughout “Froggy Little Christmas,” such as the caroler singing increasingly bizarre songs and everyone baking cookies. The melodies really sound like traditional Christmas songs, too. They are written and performed by Rebecca Sugar, creator of Cartoon Network’s Steven Universe, on which Braly worked prior to creating Amphibia.

The comedy in this episode is also particularly strong. The visual of the charging giant Santa attacking the various parade floats is great. Some of the dialogue Keith David spouts from the drone, making it look like Santa is the one saying it, is just hilarious. I’ve talked about David before, but he displays impressive range here. He goes from proper, decorous King of Amphibia to amped-up gamer on energy drinks to Santa-impersonating-madman in this one episode. The way he treats the drone like a video game was amusing, and I didn’t even catch it the first time I watched “Froggy Little Christmas.” I also liked the running gag of Mr. Boonchuy struggling to get the perfect candid photo. The creepy snap of the startled Plantars got a chuckle out of me, but the poorly timed picture with the evil Santa robot in the background was just hysterical. 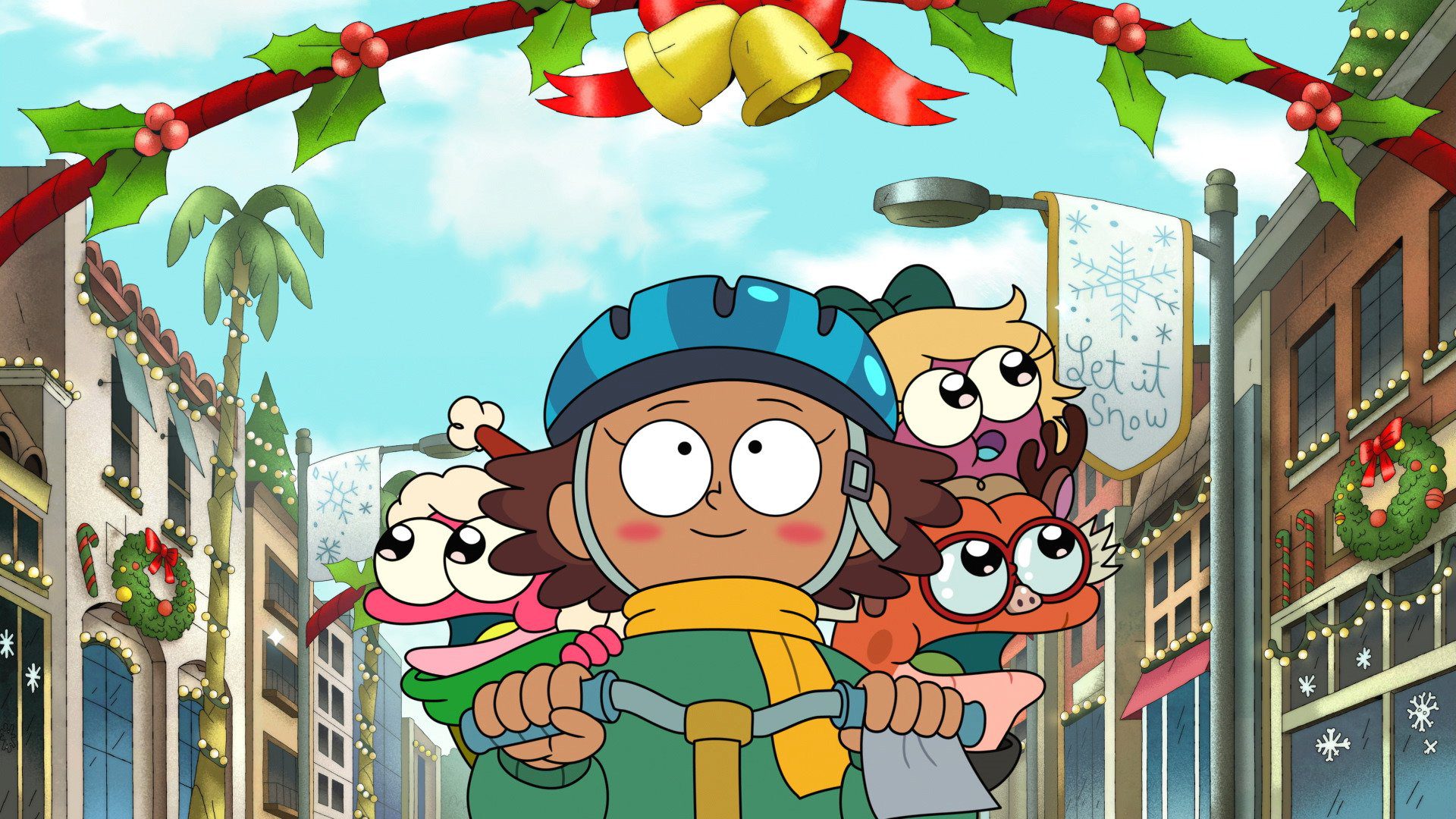 We also get a brief glimpse at the possessed Marcy as she (or what’s controlling her, rather) taunts Andrias for his failed attempt to take care of Anne. This is incredibly creepy and effective at setting up whatever Braly and his crew expect to do with this entity. Will Anne be forced to fight her friend, trying not to harm Marcy even as the individual possessing her seeks to destroy Anne and the Plantars? Will Anne be forced to choose the Plantars over Marcy, the same choice Sasha forced onto her in “Reunion?” I really like what they’ve done with Marcy in this storyline thus far, and I look forward to seeing what happens next.

What I love the most about this episode, though, is all the love on display. The Plantars love Anne and, by extension, her mom. They’re willing to do anything, even endanger their anonymity, to get Mrs. Boonchuy the ultimate gift for a holiday they don’t even understand. This reminds me of “Sprig’s Birthday” and its exploration of Amphibia’s birthday customs and how they vary from ours. Sprig is also consumed by his desire to get Anne a great present after the IT Gals explain Christmas. I love the scene where he gives Anne the gift, an action figure of her because she’s “(his) hero.” In any other show, this would have been forced and cringey. But because of Sprig’s age and how his friendship with Anne has grown, it works really well. It’s a sweet little moment in a delightful episode. Of course, Anne wants to do something for her parents since they’ve done everything for her, even taking in the Plantars. Then there’s the love among Anne’s community, with everyone pulling together to get supplies and work on the float. Dr. Jan, the IT Gals, the Thai community, and more help Anne with the float, and that genuinely makes me feel warm and fuzzy inside. There are jokes throughout “Froggy Little Christmas” that Christmas exists as a marketing ploy; Sprig even worries that he’ll ruin it if he doesn’t find the perfect thing to give Anne. But in the end, what really counts is everyone doing what they can to make the people they love happy. 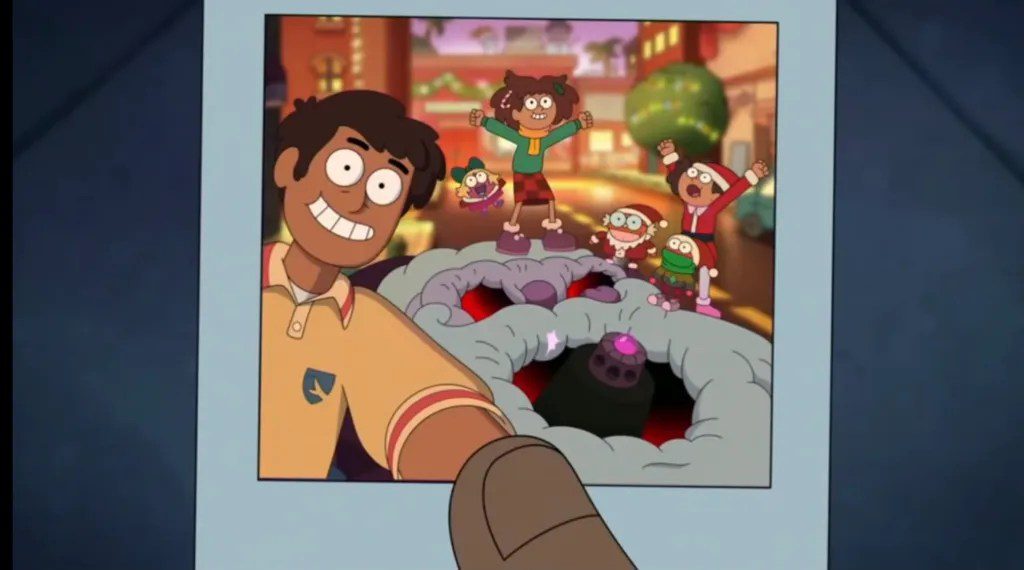 Ending the episode with Anne writing to her friends’ parents brings this idea home. After spending Christmas with her family and community, Anne knows exactly what she was missing… and Marcy and Sasha still are. We also learn that Sasha’s parents are divorced or separated, as Anne writes them separate letters. If Marcy’s actions were motivated by fear of being moved away from her friends, could Sasha have been spurred on by the frustration of growing up in a broken home? This wouldn’t make anything she did to Anne or the people of Amphibia okay, but it would be interesting. I expect this to factor in later.

“Froggy Little Christmas” is a sheer delight, a holiday treat before season 3’s hiatus (BOO!). It balances comedy, simple character moments, and plot advancement really well and evokes the spirit of Christmas. Several character interactions really gave me that warm feeling we associate with the holidays. I may watch it a couple more times this month, especially since Disney Channel presumably won’t air any more episodes of Amphibia until January or later.