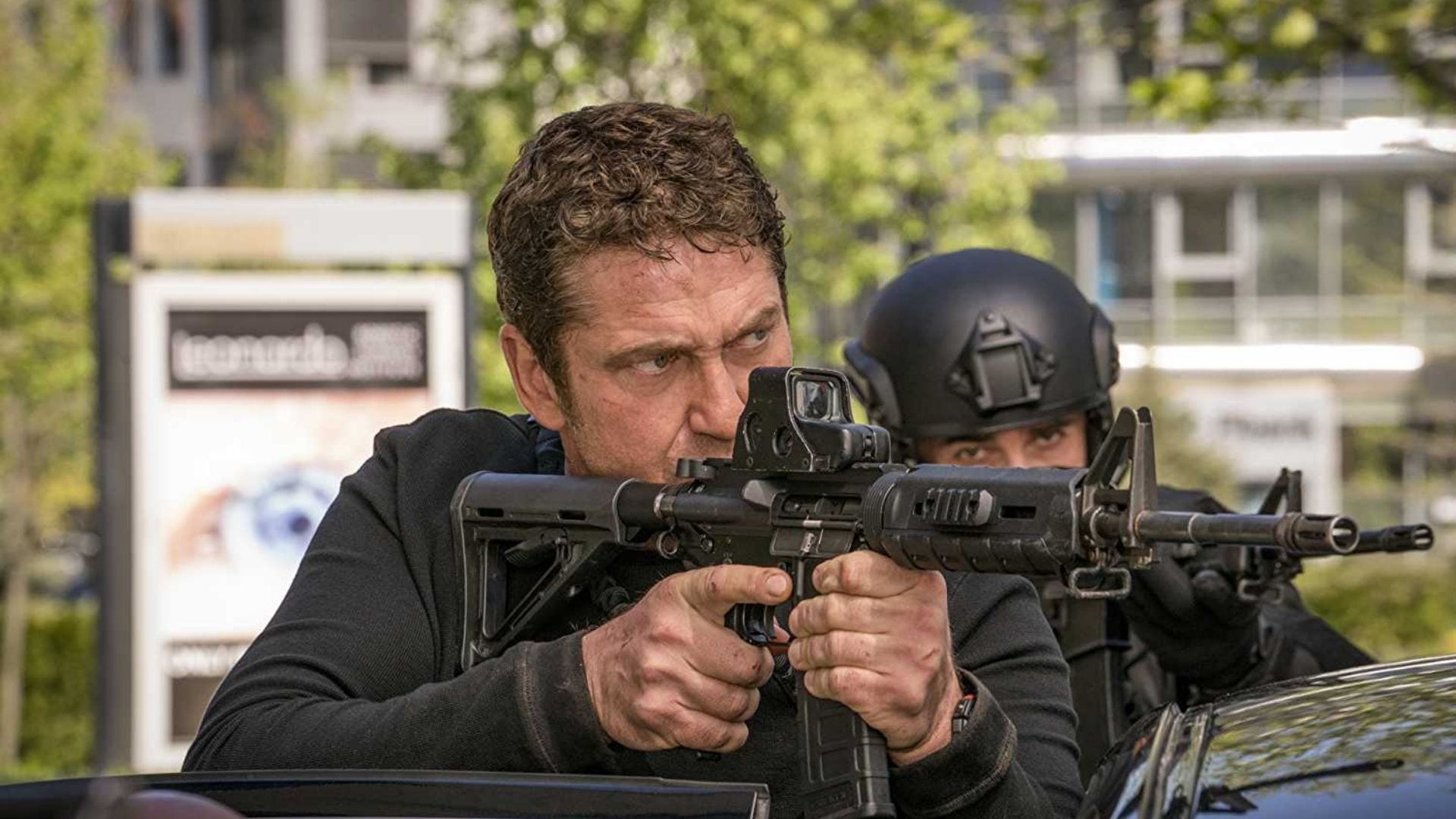 Remember when I said some of the big event movies of this summer were more conservative-leaning than you might think? Well, Angel Has Fallen one-upped all of them by being possibly the most blatantly pro-Trump film yet made. Forgoing subtext entirely, the latest in the action series about maverick Secret Service agent Mike Banning tackles themes like Deep State coups, perennial war, targeting the family of an undesirable, a reckless and unaccountable press, the need to hold corrupt politicians accountable, and – I kid you not – faked Russian conspiracy hoaxes (replete with the word “collusion”!). But, more importantly, it is a fun, violent action movie with toxic masculinity to spare. It isn’t near perfect and is probably my least favorite of the Has Fallen films, but it’s a hell of a hamburger for action fans.

While dealing with the physical ramifications of a life lived on the front lines, Mike Banning (Gerard Butler) is considering applying to become the Secret Service director under now-President Alan Trumbull (Morgan Freeman). After a harrowing attack on the President that leaves only him and Banning alive, Banning is framed for the assassination attempt and soon finds himself on the run, trying to clear his name and stop the real bad guys from completing their mission.

The action in Angel Has Fallen is mostly good, with the editing and sound effects making the impact of each bullet feel painful; the same goes for knife wounds, explosions, and hand-to-hand combat. I wasn’t crazy about the quick-cutting in the opening scene, although I understood its purpose – to make us aware of the claustrophobic conditions in which Banning finds himself; it makes logical sense, and I appreciate how it sets up a later sequence, but it doesn’t quite work. Everything else is hard and visceral; a particular standout is a battle consisting of a series of explosions about halfway through, which functions not only as an entertaining piece of violence but as a character-defining moment. The score adds to the excitement, rollicking along while increasing the tension; I’ve felt like a lot of the action scores of late were forgettable, but I found myself humming this one as I left the theater. Like its predecessors, this is a tough movie, and while obviously heightened for the genre, nothing is sanitized.

Helping establish the grittiness is the characterization of Mike Banning. While he was never an invincible superhero in his previous appearances, Angel Has Fallen presents him as particularly vulnerable. A life spent in the military and protecting the President of the United States (from situations no one has ever faced in real life) has taken its toll on Banning, and he now has concussions, damaged hearing, and chronic pain. He keeps it to himself, but his wife Leah (Piper Perabo, replacing Radha Mitchell) can tell something is up with him. With his physical ailments and a daughter who needs to have her dad around, Banning contemplates a promotion, which is effectively a desk job. This is anathema to a man of action like Banning, but he’s faced with middle age and the reality that maybe he can’t be the guy who dodges explosions and kills terrorists with his bare hands anymore. Of course, once the action starts, Banning has no choice but to be the man he wants to be, the man they’re all telling him he can’t be anymore, and while Angel Has Fallen doesn’t shy away from how much Banning hurts, it’s gratifying to see him take the bull by the horns. There’s a message here about the fading sense of masculinity in modern society and how to deal with that, and it’s reflected in some of the other characters as well. 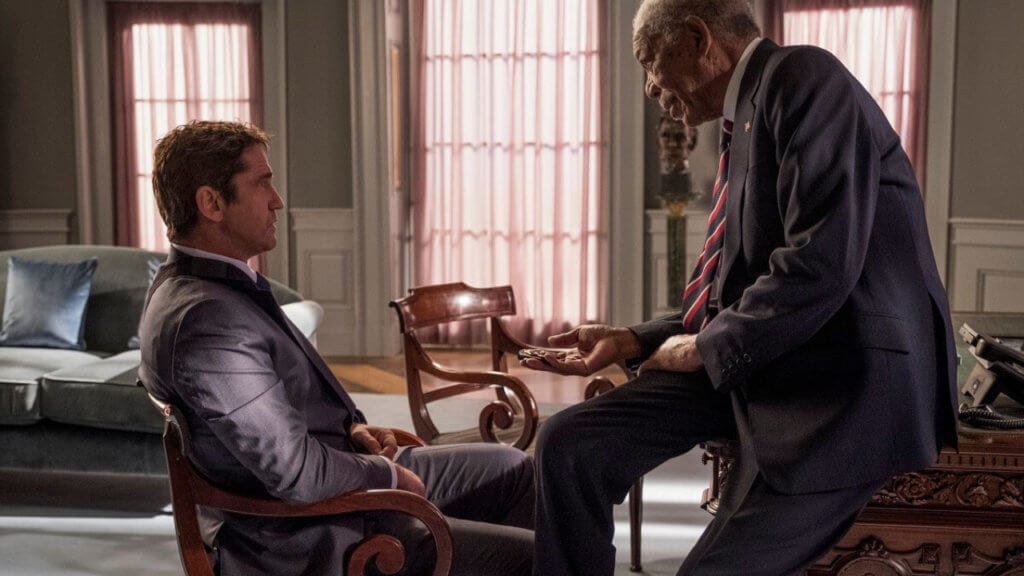 That theme is expertly examined by the actors, three of them in particular. Gerard Butler is so great as Banning because, for all his manly heroics, he feels like a real guy. All three films have wisely taken the time to explore Banning’s personal life, and he’s more human because of it. Butler can shift between a dude you’d love to invite to your barbecue (for steak, as is made perfectly clear) and a warrior forged in the fires of combat. He looks worn down in Angel Has Fallen, which works perfectly for this stage of Banning’s life, but he’s eminently believable in action as well. Danny Huston plays Wade Jennings, an old Army buddy of Banning’s who now runs a Blackwater-style private military group. Like Banning, Jennings is facing the end of his ride on the battlefield, and he’s just as reluctant to give it up, referring to himself and Banning as “lions.” These two go down different roads as the film progresses, and Huston – a veteran of movies like this – keeps Jennings human and relatable throughout. Finally, there’s the Hollywood icon that is Nick Nolte. With his weathered face and the most soulful eyes this side of Robin Williams, Nolte crafts a character whose gruff, hard exterior masks a lifetime of pain and regret, and while there’s never a doubt he can send his enemies straight to hell, he can break your heart in the next breath. In case anyone didn’t see the trailers, I won’t divulge his role in Angel Has Fallen, but it’s perfect for him, and he elevates every moment in which he graces the screen; one, in particular, will make you feel more than you ever thought you would in one of these movies (and the score once again enhances the drama, making a touching moment even more heartfelt as it amplifies the action elsewhere). I’m happy the script didn’t take the easy way out with his character, both for the story and Nolte’s terrific performance.

The rest of the cast is good too; they just don’t have as much meat to chew. Leah Banning is a fairly thankless role, and Piper Perabo plays it just fine; no better or worse than Radha Mitchell did. Morgan Freeman also has less to do this time as Trumbull, despite his rise in stature from Speaker of the House to President. Extensive setup isn’t necessary, as his relationship with Banning was developed over two other movies, but that means Angel Has Fallen works much better if you’ve seen them. Lance Reddick has the staple superior officer role, not trusting Banning when he really should. Jada Pinkett Smith is the Gerard character, doggedly chasing an innocent man, but she’s nowhere near as interesting as Richard Kimble’s pursuer. Tim Blake Nelson is convincing as the vice-President reluctantly picking up the pieces after a tragedy. And the Lois and Clark fan in me was delighted to read that Trumbull’s chief of staff was played by season 1 Jimmy Olsen Michael Landes, despite the fact that he was just kind of present. They all range from good to fine, but Butler, Huston, and Nolte are the real show. 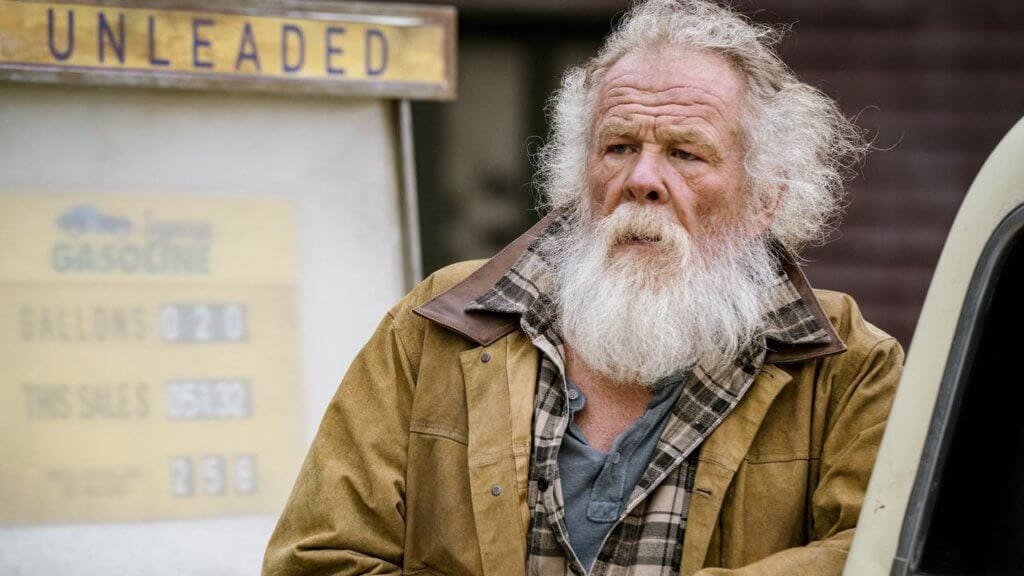 Angel Has Fallen is a gripping action movie with a tough, vulnerable hero, mostly good action scenes, and an outstanding performance from Nick Nolte. It’s also a treat for conservative audience members who fear Hollywood may leave them out in the cold. (Now be sure to support this movie and prove the audience for this kind of thing exists!) Between Angel Has Fallen and Hobbes & Shaw, August may end up becoming the go-to month for action fans.

Angel Has Fallen is a gripping action movie with a tough, vulnerable hero, mostly good action scenes, and an outstanding performance from Nick Nolte. It’s also a treat for conservative audience members who fear Hollywood may leave them out in the cold.