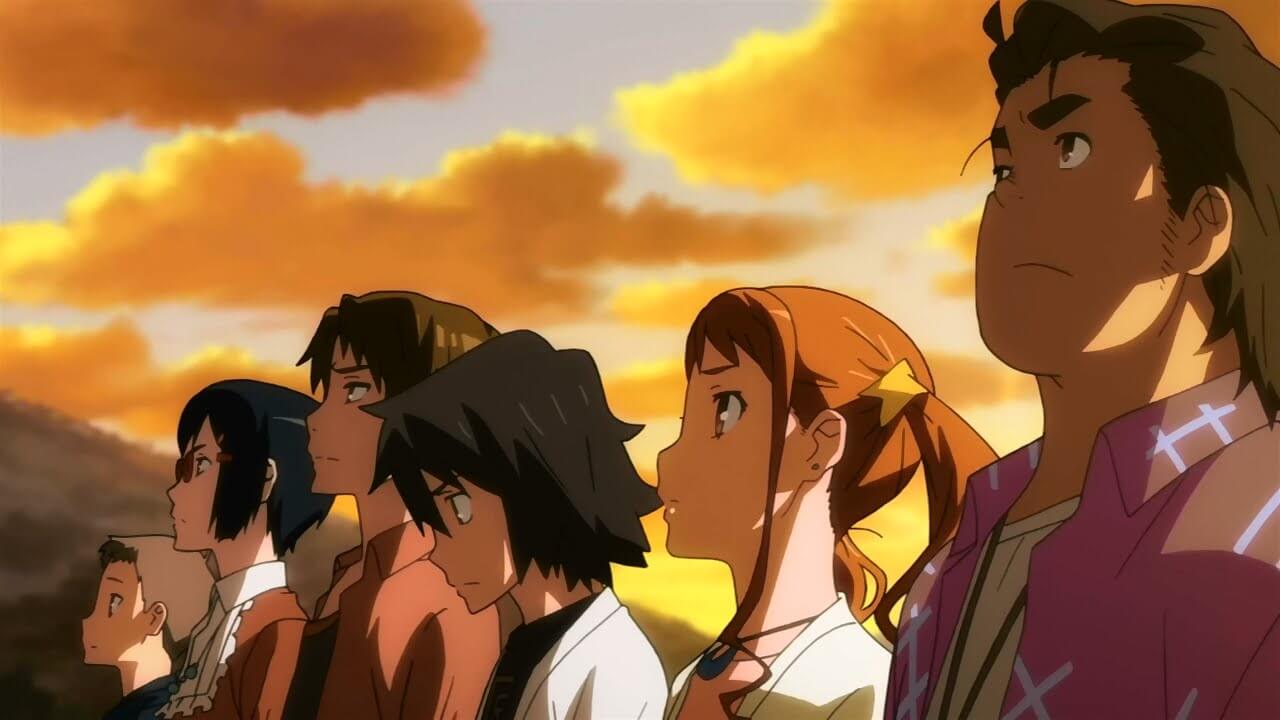 Ano Hi Mita Hana no Namae o Boku-tachi wa Mada Shiranai (or just AnoHana) first premiered in the Spring of 2011 as part of that season’s Noitamina block, but it seems like only yesterday that I first sat down to watch it. Animated by A-1 Pictures (Asterisk War, Blue Exorcist), directed by Tatsuyuki Nagai (Toradora, A Certain Scientific Railgun, Anthem of the Heart), and written by Mari Okada (Black Butler, Hanasaku Iroha), this series takes place in Chichibu City, located in the Saitama prefecture.

A few years prior to the start of the series, a group of kids were all best friends until a tragic accident claimed the life of the smallest of them, a girl named Menma. After that, the group all went their separate ways with no real intention of ever getting back together or even really speaking to each other. Fast-forward to the start of the series, and we have the former leader of the group, Jintan, living out his days at home. He’s dropped out of school and spends most of his time playing video games and eating ramen. That’s until he gets an expected visitor appearing in his life: the ghost of Menma. Over the course of eleven episodes, Jintan must slowly bring the group back together to grant a wish for their dearly departed friend and help her pass on to the afterlife. Unfortunately, this is easier said than done, as no one in the group has any real interest in reliving the past.

It’s hard to describe AnoHana as anything other than powerful. From the very first episode, the characters’ personalities are established, and all of them are dynamic; Jintan is bothered by Menma and just wants to go on with his life, Anaru is worried about her former friend but too wrapped up in her own life to do anything about it, Yukiatsu and Tsuruko are focused entirely on their studies, and Poppo is traveling the world. What is unsaid but made clear through non-vocal cues, however, is that all of these people are hurting and want desperately to find a way to move on from the incident that happened years ago.

Everyone in this group feels like they share some of the blame for Menma’s death, despite it being an accident. This is hammered home with repeated flashbacks to the incident in question from every single person’s perspective, which admittedly gets a little tiresome at times, but no less emotionally powerful. What makes this series so effective is that, unlike other series (i.e., Clannad) which will manipulate viewers into feeling sad, AnoHana allows its viewers to get to know the characters and their emotional plight before letting them decide for themselves if they are going to feel sad about the situation. Some people will walk away from AnoHana not feeling a thing, but more will leave this one a sobbing mess by the moment it’s time to say goodbye to Menma. 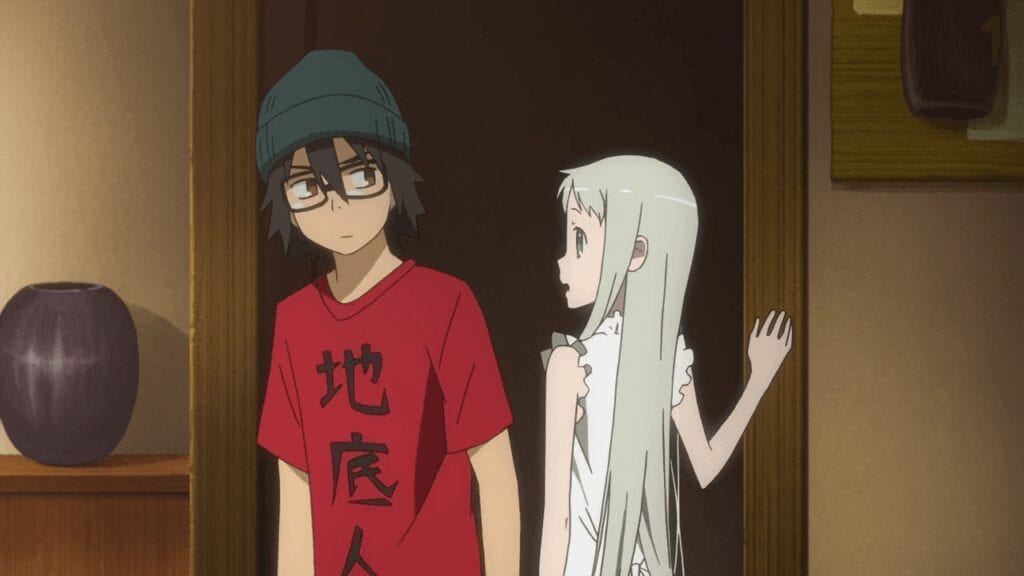 Sometimes AnoHana does hit the nail on the head a bit too hard. Early in the series, Yukiatsu tries to convince everyone that he can communicate with Menma as well, which leads to a scene with him getting caught cross-dressing in a dress similar to the one that Menma was wearing when she died. One only has to dig a little deeper, though, to see that Yukiatsu is doing this for strong reasons and it’s part of his healing process. Sadly, this is possibly one of the biggest faults of the series. While it’s appreciated that Okada decided to take the time to revisit the scene over and over again so that the audience can see just how badly it affected everyone, it does drag the pacing down quite a bit. This could lead to viewers wondering when AnoHana is going to get to the point and finally reveal Menma’s big wish.

The storytelling isn’t the only strong thing about AnoHana. With animation produced by A-1 Pictures, one would naturally expect high-quality visuals. Happily, the studio delivers; while it’s not flashy by any stretch of the imagination, the animation in AnoHana is more than serviceable. In fact, this series is better off because it tells a serious story without relying on a lot of fancy animation techniques. The character designs are simple, and the colors used are often quite understated. While most of the backgrounds involve muted colors, the main characters are more vibrant, which makes them pop against the background. The characters are able to stand out because the animation team made a conscious choice to give them colors that contrast strongly against the dark and serious visual backdrop against which they’ve been placed.

With all of the beauty in this series, it’s only fitting that AnoHana also has a gorgeous soundtrack. Composed by REMEDIOS, the music can be described similarly to the rest of the show: beautiful, but understated. Oftentimes, the most serious of scenes will be met with simple piano melodies which encapsulate the emotion of the moment in just a few notes. In addition to this, you have the opening and closing themes. While the former (“Blue Bookmark” by Galileo Galilei) isn’t as strong, anyone who finds themselves captured by these characters will always remember the closing theme from the moment it starts to play during the final episode of the series. It is that powerful. 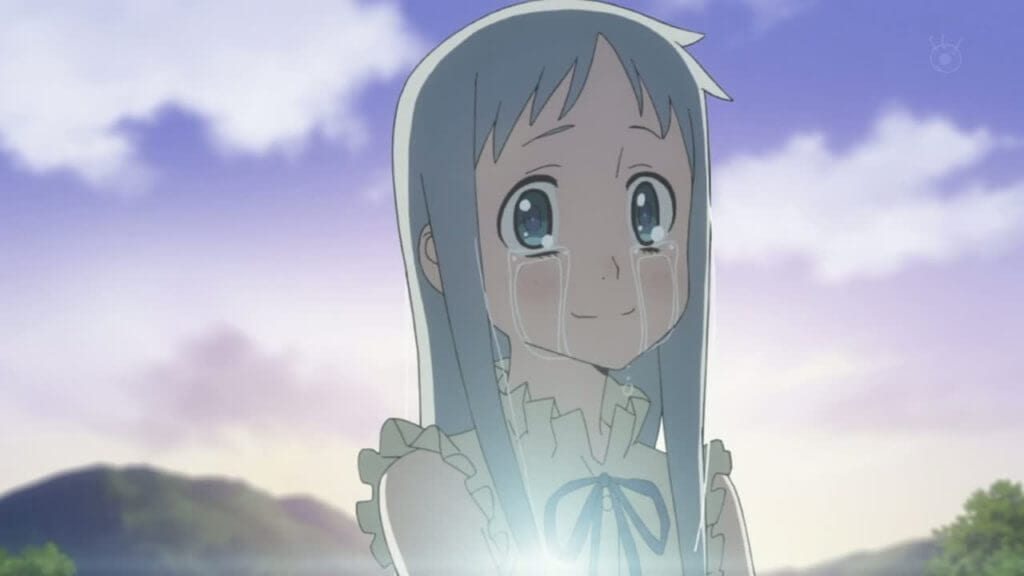 In the end, AnoHana does a fantastic job of telling a difficult story in a limited amount of time. While the pacing may suffer in places, the overall product more than makes up for that. Within only a couple of episodes, it’s hard to not fall in love with Menma and wonder what could be so important that she feels the need to visit Jintan as a ghost. When the reveal finally does happen, you’ll be crying and shouting “Menma!” along with the cast.

If you’re looking for a series that will give you a ton of laughs and feel-good moments, you’re going to be very disappointed with AnoHana. In order to enjoy this one, you should be ready to sit through some very tough scenes. There will be times when the characters will frustrate you. There will be times when the story will be hard to deal with due to the heavy emotion involved. If you want the full effect of this series, though, you’ll deal with this; just have some tissues handy.

Beautiful, powerful, memorable, and downright charming, AnoHana will stick with you for many months and even years after you watch it. Enjoy this journey and allow yourself to be swept away to that secret base in the forest where the Super Peace Busters shared happier times together. That is your mission, and you have no reason not to accept it.

AnoHana is a charming but emotionally challenging series which will make you cry more than laugh. It has flawed moments, but it all serves a greater purpose. This is absolutely worth your time.