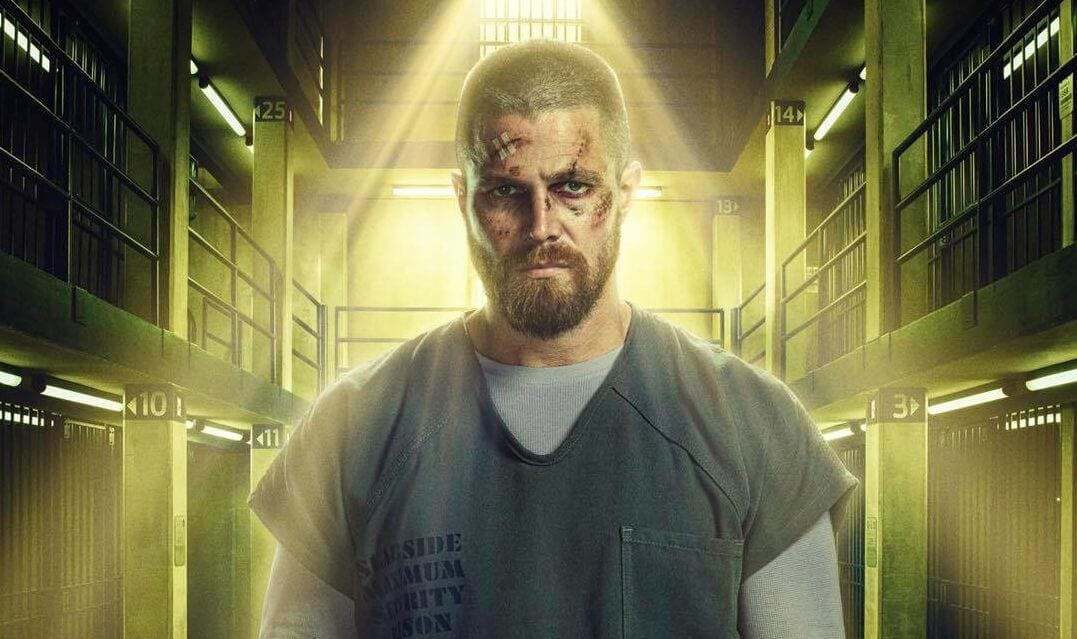 The eagerly anticipated premiere for the seventh season of CW’s Arrow brought with it far more questions than answers by the credit roll. The series has been hot and cold with its viewers, specifically those who are well-versed in the comic book tales of DC’s resident Emerald Archer. Season 7 seeks to shake things up from the get-go, with “Inmate 4587” picking up where last season left off, with Oliver incarcerated after turning himself over to the FBI in exchange for his teammates’ immunity. This season has a lot of ground to make up, even given that made up by the last season. We’re set up at the beginning of “Inmate 4587” with Oliver waking from a nightmare wherein his wife Felicity and son William are being chased by gangster Ricardo Diaz, who escaped capture in last season’s finale. The nightmare is a foreshadowing of things to come. Oliver is attempting to settle into his current life of incarceration, focusing on a photo and keeping his body in as close to top form as he can. But a prison in which half of the most dangerous inmates were put there by you offers no shortage of distractions, and on multiple occasions we witness him being assaulted by a number of the other prisoners, including Ben Turner, Derek Sampson, and Danny “Brick” Brickwell. These three earlier season antagonists do just what that title implies – antagonize Oliver, making several attempts on his life and facilitating a number of cafeteria brawls for use as cover while they try to isolate the former vigilante and assault him, an event on which the prison guards maintain a very laissez-faire position – showing no amount of adoration for the man who contributed to the apprehension and imprisonment of many of the most dangerous criminals over whom they preside. 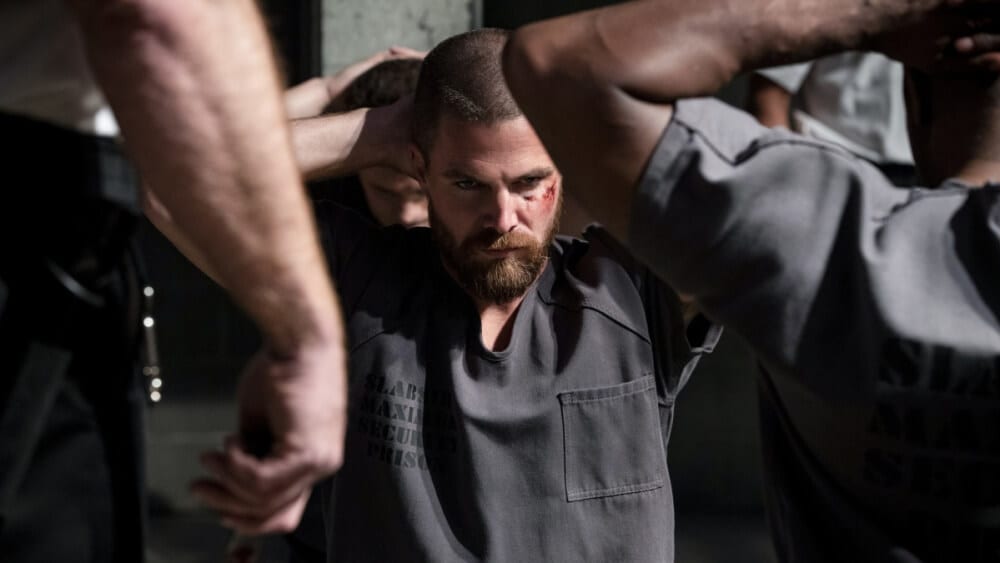 The former members of Team Arrow have all taken up new lives in the five months since their leader’s decision to turn himself over to the authorities. Dinah “Black Canary” Drake is now captain of the Star City Police Department, Rene “Wild Dog” Ramirez has hung up his hockey pads and instead teaches self-defense boxing to the youth in the Glades, and Felicity is now a barista at a coffee shop, with her and Oliver’s son William living in hiding while Diaz is still at large. Dinah’s job has been made harder with Star City’s “zero tolerance” policy against vigilantism, and in order to maintain the immunity of herself and her former vigilante teammates, she must enforce that policy to the full extent of her ability – a task made more difficult by the sudden emergence of a Green Arrow copycat. Rene has been training the youth of the Glades, as well as his own daughter, how to focus and defend themselves in an old rundown gym whose equipment is falling apart at the seams (quite literally in the case of the punching bags), and notes to the impressionable and vulnerable kids that he’s left his life of crime-fighting behind him. But when one of the frustrated youths tries to buy guns off of a street dealer in order to obtain retribution for his parents’ store getting robbed, Rene follows and is forced to step in when the dealer remembers his past as Wild Dog. Felicity struggles with not being able to help her husband Ollie or her city, and clearly is feeling lost without the ability to use her genius, even going so far as to help one of her customers with a coding issue (or something more tech-savvy individuals would understand) on his laptop.

While we’re only in the premiere episode of the new season, the tone feels promising. Each character clearly has their own story that will hopefully see them grow over the course of the arc. One of the series’ biggest failings in recent seasons has been putting heavy emphasis on the other characters outside of Oliver, Digs, and Felicity, without giving the viewers any reason to care about them. I know that for myself, anyways, the split off of the B-Team (Dinah, Curtis, and Rene) when they were angry with Oliver felt overly dramatic and annoying, and even though they may have had some legitimate grievances with their hooded leader, their scripts felt like spoiled, angsty teenagers whining because of their curfew. Last season gripes aside, this season seems to be setting up far more realistic or understandable motivations for these characters, including some tension between former teammates over conflicting ideals. “Inmate 4587,” while generally solid overall, possessed some truly shining moments: though a brief exchange, John Diggle came to visit Oliver at the penitentiary, and while few words were shared between the former brothers at arms, there was a palpable tone of diminishing hope within Oliver’s eyes that John was able to pick up on immediately, and he voiced his concern for his friend. A truly emotional moment came when, following Diaz attacking Felicity and William at their home, Felicity visited her husband and the two shared a moment of longing and fear for a future without Oliver free from prison. A battered Felicity’s asking Oliver if he knew what it felt like to not be able to do anything to protect his family struck a particular chord, and he plead through his own tears with her to not tempt the vigilante within him, stating that he was doing his very best to keep his head down in an effort to perhaps reduce his sentence. There was an effort to make Oliver appear passive to the plight of others within the prison in “Inmate 4587,” when another inmate who claimed to have been falsely accused of murder emplored him to be his protector, but the incarcerated Emerald Archer turned the man down and even walked away while he was beaten by villains Danny Brickwell and Derek Sampson. This scene and the through-the-cell-wall conversation that followed between the man and Oliver, while a sad one, did not appear to have the same effect on him as his visit with his wife. 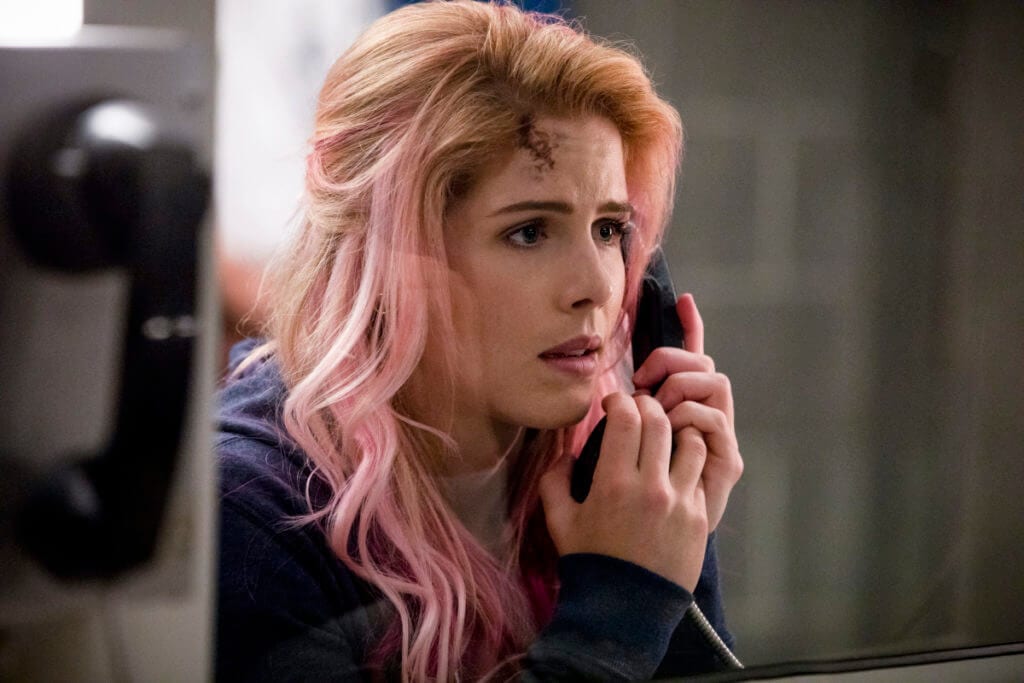 The production value and fight choreography have been turned up, at least based on “Inmate 4587.” Rene had what is far and away his most impressive action scene in the series to date when he fought to save one of his boxing students from a gun dealer and his thugs; the crisp movements and camera angles that went alongside them were a surprise, and a welcome one. Additionally, there was a scene in which Oliver was jumped by several other inmates while in the shower (a scene many of Stephen Amell’s fans no doubt enjoyed), and he had an impressively executed one-versus-many fight that also shows some equally creative use of camera angles to prevent… uhh… you get the picture. There were a few top-down shots of Oliver slamming his assailants through the shower walls and tile floor as well. One scene which caught me by surprise for its visual effects was when the mysterious copycat Green Arrow planted a rope-tethered arrow into an underground black market weapons dealer and then yanked on the tether, sending the criminal reeling into the air towards – and over the head of – this new vigilante. While the action itself was impressive on its own, the camera work for the shot was every bit as such, as it rotated around and over the two actors. Season seven is trying an interesting hook that harkens back to the earlier seasons, which told parallel past and present stories, by showing us an adult William traveling (presumably) to the island where his father was shipwrecked decades prior, Lian Yu, or “Purgatory.” This was revealed to us slowly throughout “Inmate 4587,” and we’re unsure of what William’s goals might be beyond perhaps to gain a better understanding of what made his father the man that he was (at this point we are also unsure of Oliver’s status – whether disabled, alive, or otherwise), but just before the end title and credits roll, William came face-to-face with none other than an older and far more grizzled Roy “Red Arrow a.k.a. Arsenal”  Harper.

Where this season will go from here is anyone’s guess. Emerald Archer fan club faithful will tell you that we’re going to see a return to a darker Oliver and the addition of his long goatee at last. As for the story, it’s been hinted that we may be seeing the appearance of the Green Arrow antagonists the Longbow Hunters, and both Ricardo Diaz and the Earth-2 Laurel are still loose ends to be tied before the season is through; thankfully we’re just getting started!

The tension is rising from the get-go as the former members of Team Arrow try to pick up the pieces and put them back together. What will become of Oliver in prison and his loved ones while separated from his protection is anyone's guess, but the show writers have nocked this episode and the season is off to a promising start, but only time will tell if it will hit the bullseye by the finale.