After a brief hiatus, Arrow has returned to the CW with this season’s fourteenth episode, “Brothers & Sisters.” The title foretells of a focus on familial bonds, and that’s exactly what we receive – both blood and otherwise. Oliver is determined to build a relationship of trust with his half-sister Emiko, something that he begins not necessarily on the best foot while attempting to offer aid in her quest for revenge on her mother’s killer. Felicity has her own family problems to deal with as she struggles to let her husband know that she happens to be carrying their first child together (Mia in the flash-forward timeline – we’ll get to that), as well as harboring frustration with Diggle and Lyla at their decision to put their mission ahead of her family’s safety with regards to Ricardo Diaz. This is only exacerbated by Diggle coming clean with Oliver and Felicity about A.R.G.U.S.’s revitalizing of the Ghost Initiative (a.k.a. Taskforce X, a.k.a. Suicide Squad – yay for too many monikers). Felicity, reasonably enough, takes this news with less than a joyful demeanor, and Ollie attempts to play the fence by recognizing his wife’s concerns while noting that if Diaz can, in fact, be leveraged to take down an even greater threat (this Dante character we’ve been hearing about), then he is willing to make that trade.

Much of “Brothers & Sisters” is spent tackling various relationships in pairs: Felicity and Laurel, Oliver and Emiko, Diggle and Lyla, and so forth. The most notable one for me was the former, Felicity and Earth-Two Laurel Lance (a.k.a. Black Siren); this season has been building entertaining chemistry between the two females and has helped to flesh out both of them as a result. Felicity’s character up to this point has primarily had her interactions focused on Oliver and, to a lesser extent, William, but Laurel has brought about a new facet to both of their characters, and it is something that I feel the audience appreciates. In fact, it is the former Black Siren herself that first realizes that Felicity is pregnant when they are talking in Smoak’s apartment. The Star City DA notices a marked lack of alcohol or coffee in the brainiac’s hand and, instead, notates the heavy presence and consumption of chocolate. This interaction is quite funny, but it’s one-upped by a later one wherein Laurel brings over a grocery bag filled to the top with prenatal vitamins and other various nutritional items, as well as a rabbit’s dream’s worth of vegetables and healthy foods. The maternal instincts in overdrive is a new hat for Laurel to wear and is a stark contrast to her usual dark and sassy demeanor. Nevertheless, it’s a treat to watch, and I hope this isn’t the last we see of these sorts of sequences between the two budding friends. Based on the consequences of “Brothers & Sisters,” the rest of the season could use the levity.

This season has been building a lot of relationships from the outset, and ending some in the case of Curtis’ departure from the team for a plush Washington post. One that should be the most significant is that of Oliver and Emiko. I say “should” because, up until this point, not much has been done to explore it. I know full well that Emiko was revealed not many episodes ago, but we are beyond the halfway point of the season (the point of no return, as it were) and, as it stands, we are not on pace to see all threads tied up by the finale. “Brothers & Sisters” attempts to delve deeper into what it means to have two Green Arrows running around (one of which is sanctioned by Star City law enforcement and the other not so much), as well as how many ways Oliver can get in Emiko’s way. With regards to the latter issue, Oliver offers to help his half-sister track down a lead on her mother’s killer but sidelines her when it comes time to actually go into the field and make the capture. Naturally, this does not go over well with Emiko, and she shows up and storms off when Oliver makes the call to have the weapons dealer placed in Star City PD custody for questioning. He mends this affront later by sneakily gifting Emiko with the transcripts of the interrogation, something she notes isn’t exactly standard operating procedure for the department, and she’s grateful for it. There is an important interaction between Ollie and Rene in which the Wild Dog tells his teammate that Emiko doesn’t need a babysitter or a protector; she just needs a brother and that Oliver should focus first on that. There are moments in “Brothers & Sisters” between Oliver and Emiko that felt like progress but are cut short, and based on further events that I’ll touch on momentarily, I have a feeling that progress is about to take a few steps backward. 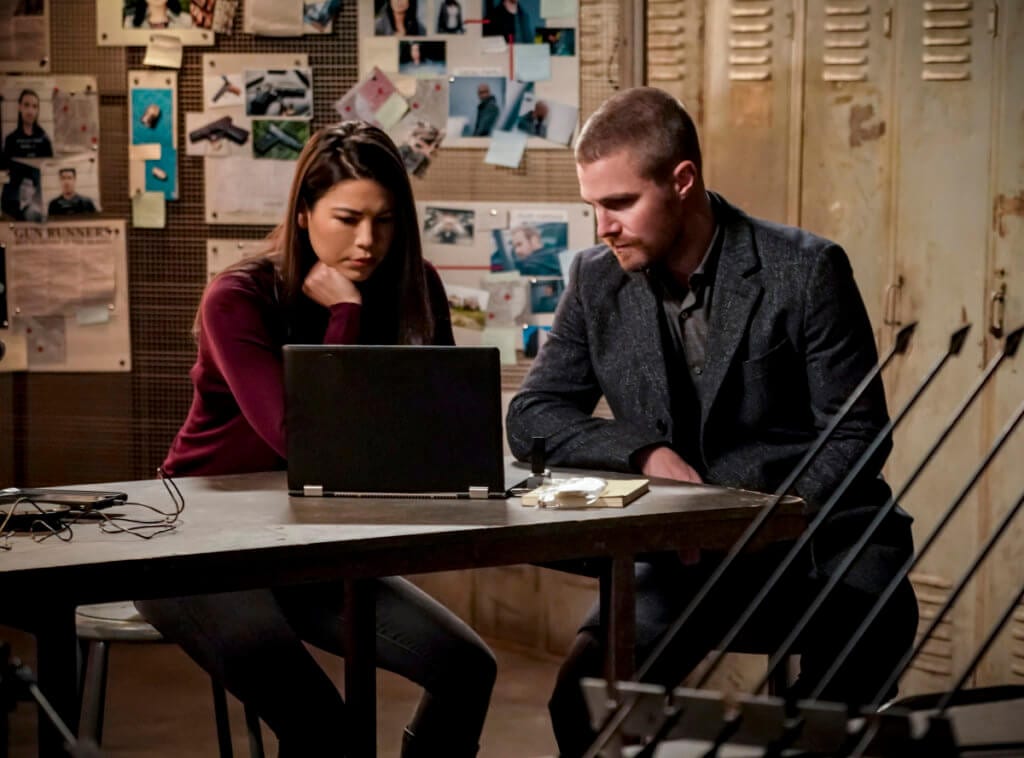 The Ghost Initiative/Taskforce X/Suicide Squad, along with Oliver in the field and Felicity resuming her role as Overwatch, reluctantly takes on a mission to finally catch a deal between Dante and an up-and-coming revolutionary princess. It’s too much to ask for something like this to go off without a hitch, so of course, it doesn’t (spoiler alert). Whoever could have guessed that Diaz would double-cross our heroes to save his own ass? Rhetorical question, obviously. The Dragon tips off Dante to the ambush, and, as a result, the princess – as well as a top brass A.R.G.U.S. agent – get their throats slit by Dante, who proves to be quite the deadly fighter. He not only holds his own against Oliver, but bests him in combat before escaping. Dante showcases deft precision with throwing knives (upon close inspection, they appear to be kunai) both at range and in close quarters. Apart from Ricardo Diaz getting lit on fire in a pretty brutal scene (and he is, presumably, no longer in the picture), the big reveal at the end comes when Dante shows up at Emiko’s hideout and tells her that it’s time for her to “come home,” suggesting that she trained with him at some point and is operating under his orders for a yet-to-be-revealed mission. The idea of Emiko having another purpose beyond that of revenge on her mother’s killer is intriguing, but I am becoming increasingly concerned with the high count of plot threads that seem no closer to being tied up. That goes double for the flash-forward timeline, in which there felt to be a marked lack of progression, and how it will tie back to Felicity revealing to Oliver that she is pregnant. “Brothers & Sisters” is more Days of our Lives than it was action, but there is a meaningful deepening of relationships, so I’ll let it slide… for now.

Deepening relationships and some much-needed levity with regards to Felicity and Laurel's interactions are high points of “Brothers & Sisters,” but the notable lack of Green Arrow action and the worrisome lack of wrapping up of plot threads has me worried that this season may have bitten off more than it can chew.