Who’s ready for the Flash Forward timeline? I hope everyone is, because this week’s episode of Arrow, titled “Star City 2040,” takes place exclusively in the two-decades-forward time we’ve been getting brief glimpses of throughout the season. It sure took them long enough, but we now have mostly wrapped up what appears to be the grand design of this future timeline. The short version? Artificial Intelligence. The longer version? We witness the birth of Oliver and Felicity’s daughter Mia, and then her subsequent training under Nyssa from an early age to the young woman with whom we’re familiar. One evening, Mia discovers Felicity’s rig that she uses to maintain an Overwatch eye on Star City from afar. Her reaction is less than pleased, to put things mildly, and after yelling at her mother over the evils of vigilantism, Mia storms off and begins her days of prizefighting in Star City’s underground. Cut to the time we’re more accustomed to, wherein Mia and William sneak into the Glades, which has a barrier surrounding it reminiscent of the Berlin Wall but measurably higher tech. Once inside, they put together a plan that involves some quick hands by Mia and fast-talking by William to snag a DNA sample from the CEO of Galaxy One, Kevin Dale. Why is this important? They’ve determined that Felicity, if alive, is being held on an unregistered floor; furthermore, the old members of Team Arrow, Roy, and Dinah, along with Zoe seem to have found that Galaxy One is also where the bombs that have been placed around the city are being stored.

Rene, mayor of the Glades (yeah, that still has not gotten less weird to say) in “Star City 2040,” tries to convince his old teammates and his exceedingly disappointed daughter that the plan was to evacuate the entire city before setting off the bombs. Naturally, this means that he knew about the plot to destroy Star City and, regardless of his misguided intentions, that doesn’t sit well with Zoe at all. Both teams converge on Galaxy One’s lower floors and manage to rescue Felicity. This results in a surprisingly warm reunion between her and William, but far less so with Mia, as she still harbors anger towards her mother. The bombs, on the other hand, are nowhere to be found. Rene shows up to tell the team that they were right; Dale was playing him and had no plans of evacuating the city before detonating them. Not only that, but they’re primed and set to go off in less than 40 minutes. The team scrambles together a plan and tracks Dale down during a festival (convenient that it’s a masquerade). The device that serves as the fail-safe and power for the bombs is… a fidget cube, for all intents and purposes (just go with it), and a few action sequences result in Mia firing a perfectly placed arrow – like father, like daughter – that snatches the devices from Dale and destroys it. The old team had once again saved the city, but Rene is forced to blame the vigilantes for the attack as cover.

“Star City 2040” brings with it more action than most recent airings of the series, and it’s a welcome sight to see some of the old team kicking butt alongside each other, especially Roy, whose choreography has always been near the top of the cast right, up there with Stephen Amell’s. Mia’s own fight scenes are engaging, with specific regard given to when she tracks down Dale at the party and he lures her into his office, where roughly a dozen armed men are waiting for her. While she takes a few knocks, Blackstar mostly thrashes the guns for hire thoroughly, and it’s very well choreographed, with much of it feeling like a throwback akin to early Hood fight scenes. During the Galaxy One/Eden Corps break-in, the fight scene to rescue Felicity isn’t nearly as well put together or engaging and consists of a lot of single hits followed by dramatic camera panning, with a somewhat serious expression on our heroes’ faces. This sequence also has a few roughly delivered moves and bad sells, but it is quickly overshadowed by the Glades festival sequence and rendered forgotten. One final note on the choreography end is that the young actresses they got to play the younger versions of Mia do great jobs during the training session sequence with Nyssa, at least with what little screen time they are given. Being a big fan of action movies myself, I am a firm believer that you can never start them too young! 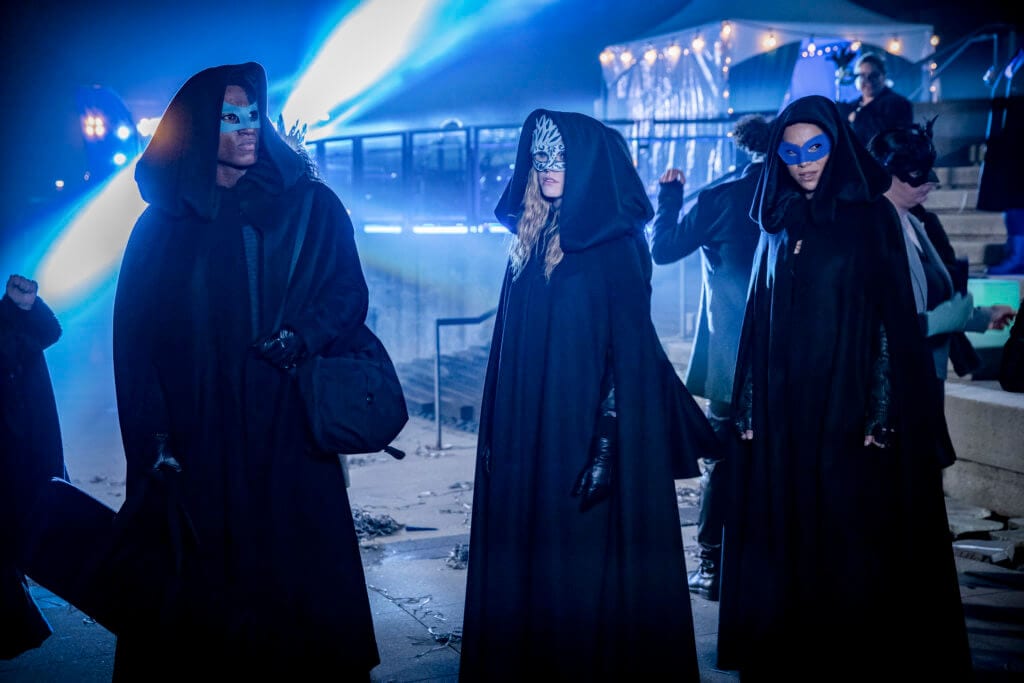 This “resolution” to the future timeline answers a lot of questions that we’ve had from the outset of this season; however, “Star City 2040” frustratingly never truly touches on what exactly happened to Oliver. We can clearly surmise that he’s dead, and as I’ve said in previous weeks, given what we know regarding his deal with the Monitor to save Barry and Kara during the “Elseworlds” crossover event and the coming “Crisis on Infinite Earths” event that will surely bring the consequences of that deal to bear (I’m really trying hard to forget that the CW is touching that…), and now with confirmation that Arrow is ending this fall with a half season, we know he’s going to die. It’s painfully clear that his deal with the Monitor is going to play some role in this, and the crossover events are typically scheduled around a given season’s midpoint, so that accounts for the half-season, but more than Felicity skimming over anything having to do with Oliver’s death was needed in “Star City 2040.” The episode ends with Felicity bringing online (or, at the very least, starting up) her new artificial intelligence program codenamed “Archer.” Anyone who’s anyone knows that AI never turns out well, and I have a not-so-subtle suspicion that this new program, which I’m sure was created to help Overwatch with her city monitoring duties, will contribute to Star City going to hell in a handbag.

It was great to finally have some level of resolution to this flash forward timeline we've been dealing with. The action, barring one particular sequence was also better than most and provided some great moments that kept "Star City 2040" entertaining.