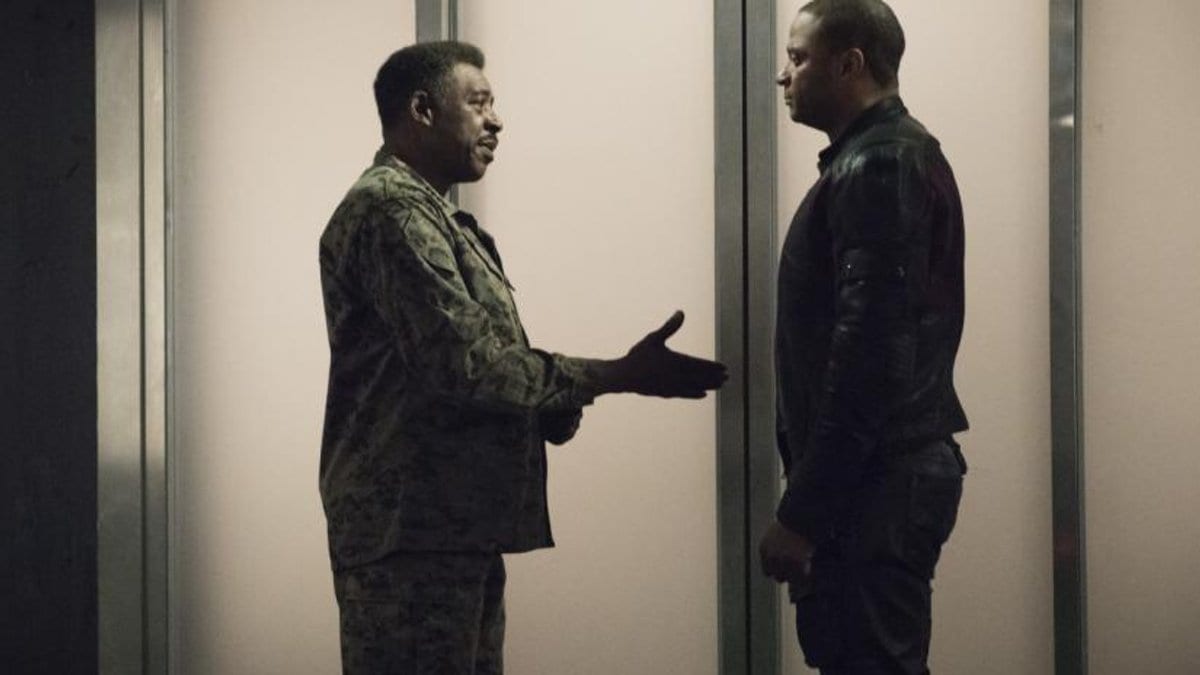 For two weeks in a row now, Arrow has centered its spotlight (or crosshairs) on a single character. Last week, we wrapped up Earth-Two Laurel’s arc that had begun last season, and the resolution to that was by and large a rewarding one. In this week’s aptly named episode, “Spartan,” our attention is turned to John Diggle, Oliver’s closest friend throughout his tenure as the Green Arrow so far. More specifically, we learn that John has been keeping some of his familial history secret from his teammates. Team Arrow is currently hitting a wall (again) with tracking down Emiko and Dante, and Felicity is struggling to rebuild ARCHER’s database. This is made measurably more complicated when one of the Ninth Circle’s agents breaks into her office and manages to get away with the tablet containing all of Overwatch’s powerful surveillance programs on it (maybe keeping everything on an easily pilfered item wasn’t Smoak’s best move). In an effort to retrieve as much information as they can, Ollie and Diggle pay a visit to the top brass in the form of General Stewart (played by Ernie Hudson), who, as it turns out, also happens to be John’s estranged step-father following his birth father being killed in the line of duty while on a mission. Oliver quickly catches on to John’s decidedly obstinate attitude towards the general and notes his friend’s lack of respect for the chain of command. When pressed hard enough, John lets Oliver know that General Stewart was the sole survivor of the mission on which his father died, and he holds him responsible for leaving him behind. Furthermore, once Stewart started coming around his home more often, he put all of his time into “toughening up” John and his brother Andy through rigorous training. To say that John is holding a grudge against the man would be a bit of an understatement.

When the team splits up to take on different targets, Spartan, wanting to keep an eye on Stewart, goes with the general. If you smell a trap, then your olfactory senses are on-point, because stepfather and son are captured and tortured by the Ninth Circle. The ordeal becomes a bonding exercise for the two, however, and when combined with some top secret info made not so secret thanks to Felicity (is anything truly secret for her?) that sheds light on the truth of the mission that resulted in Diggle’s dad being KIA, he and the general are able to finally reconcile. Throughout this ordeal, Felicity struggles with the idea that ARCHER could be so easily procured and used as a weapon, and the Ninth Circle’s goal of using a bioweapon doesn’t grant her mind any level of solace either. And while Alena attempts to reassure her friend that they can build it better and more secure, Felicity isn’t so convinced and chooses to wipe the program and leave it on the back burner for a while until she’s confident that she can make it more secure. Alena appears to have a different view on this, however, and copies the root code for ARCHER for an as-yet-unrevealed purpose.

We’re still doing future stuff in “Spartan” as well, and, while it is brief, we learn that the ARCHER program has been modified to be integrated into Galaxy One’s high-tech SWAT team, but not just one like we saw last week – we’re talking dozens. That presents an immediate ramp-up in danger level for our future timeline heroes, and how they will be able to handle it is something I’m looking forward to discovering. While the primary focus in “Spartan” was John Diggle, we did see a new development regarding Emiko and her reaction to Oliver telling her that Dante was the one who, in fact, had her mother murdered. Not counting Dante’s own admission of guilt to Emiko, stating that it was necessary to sever her ties to her family so that the Ninth Circle would be her singular focus and loyalty, she appears to have taken Oliver’s reveal seriously. Clearly, Emiko doesn’t care much for betrayal, and she actually kills Dante mercilessly for his deception and transgression. “Spartan” is not an action-heavy episode, and given the character building and exposition we received, that’s not an entirely bad thing. Seeing John struggle against his traditionally regimented and compliant nature with regards to following the chain of command is an interesting turn for the character and serves to prove that even those traits which may seem to be written in stone in our personality’s coding may at times be bent when it comes to matters of family.

We now know for certain that Felicity will not be returning after this season, so what will lead from where we are in “Spartan” to the events of the flash-forward timeline are still in question. Will Alena turn heel and end up trying to reuse the ARCHER program separate from its original creator and that’s how it will end up in the wrong hands? Given the fact that the young woman’s strong desire to change the world has placed her in bad company before, it’s not outside the realm of possibility that it could do so again, but this time to a much greater detriment for the city. We did also learn in the future that John had a second son, as is revealed by Connor to Mia while they are attempting to gather intel. Is John still alive and around in the future? Hopefully, the coming weeks will bring some much-needed answers.

Arrow continues its trend of character-focused episodes and "Spartan" was a fun dive into our favorite Spartan's past. Ernie Hudson's performance was fantastic and he clearly jived well with the rest of the cast. I only hope that we get some more narrative that brings us closer to the resolution of this season's plot.