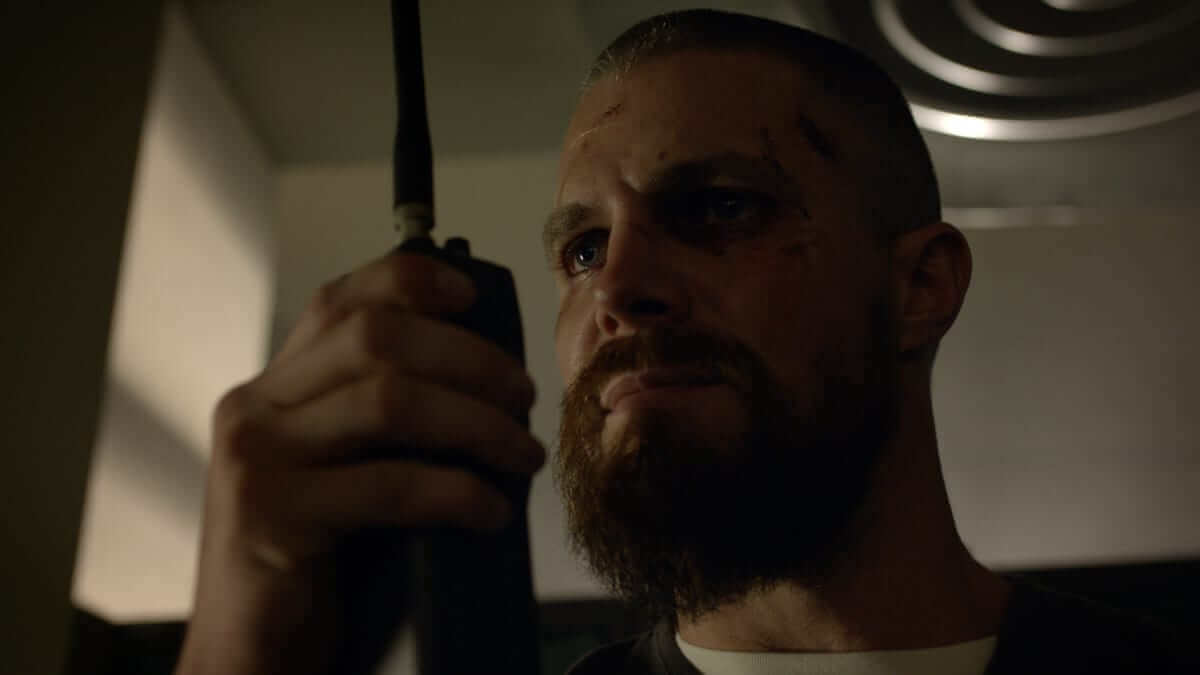 Freedom; something both fans and Oliver Queen’s wife, Felicity Smoak, have been fervently anticipating since the season’s outset. This week’s Arrow, “The Slabside Redemption,” brings, at long last, the journey of Oliver’s incarceration to a close. But the road to the Green Arrow’s emancipation within the episode is a long one indeed. Oliver is informed by Earth-2 Laurel that they’ve managed to secure him an early release from the maximum security prison and, within a mere handful of hours, Oliver will be free. The catch? Despite having been caught in the prior episode, Ricardo Diaz has, unsurprisingly, managed to buy off one of the guards escorting him to Slabside Prison. Once he arrives, he takes control of the penitentiary from the guards, who are quickly outnumbered by the entirety of its collection of inmates. Oliver springs into action by going Shawshank Redemption on his cell (we’ll revisit this in a bit…) and then makes his way through the blocks of the prison with the sole goal of getting to Diaz and taking him down once and for all. Sounds like a simple enough plan, right? Well, as a certain sub-zero Captain from another Arrowverse show would say, “Expect the plan to go off the rails” – and that is exactly what happens, as he naturally encounters more than a few hitches on his way to the cafeteria where Diaz is fortified.

The first roadblock standing in Oliver’s way – really more of a speed bump – is the duo of Danny Brickwell and Derek Sampson, whom Ollie encounters in one of Slabside’s lower halls. At first, Oliver shows strength over his two former villains-of-the-week, but after taking a quick knife attack, Oliver is quickly put on the defensive before being sent to the ground and kicked repeatedly. Also not surprisingly, Benjamin Turner, AKA Bronze Tiger in the comics, comes to Ollie’s aid, and the two former enemies turned temporary friendly nemeses make short work of Brick and Cody Rhodes-er-Sampson. This turn of events was somewhat foreshadowed earlier in “The Slabside Redemption,” when Oliver apologizes to a solitary-confined Turner for him being wrongfully accused of the murder of a Slabside Guard – Ollie now knowing that it was, in fact, his Slabside “sidekick,” Stanley, who had committed the deed. Stanley later sedates Oliver when the vigilante is making his way through the rioting prison. It is here where we learn the potential extent of Stanley’s lack of innocence and that he not only committed the murder for which he was sent into Slabside, but had also committed several others. In “The Slabside Redemption,” we see a new, insane side of Stanley – an obsession, really – that we learn has driven him to do heinous things. Oliver quickly handles the pint-sized problem and continues towards Diaz. Ultimately, Oliver triumphs over Ricardo Diaz, albeit not without some scrapes and bruises, and is reunited with his wife by the end as Diggle watches. Hooray for happy endings and new beginnings.

For all of the buildup to Oliver finally getting free of incarceration and getting payback against Ricardo Diaz, “The Slabside Redemption” is fairly one-dimensional. Now, that’s not exactly a bad thing; I watch this show because I want to watch the Green Arrow, not his non-super-friends. And while I’ve appreciated the character development of and following up with Team Arrow post-Oliver turning himself over to the feds, I measurably more appreciate having an episode whose sole focus is Oliver kicking the snot out of bad guys. It was long overdue, but boy was it worth it. The fight scenes (which is really 90% of the airtime) are engaging and fun and had me cheering the whole time for Oliver and Turner as they kicked in the teeth of the lot of Slabside’s rioting inmate population. Michael Jai White is especially brutal (surprise surprise) in his takedowns of his fellow inmates with a variety of forward and spinning kicks. “The Slabside Redemption” showcases Turner as far more than the villain-of-the-week he once was, and I believe he proved to not only himself, but the audience and Oliver that he’s far more of a man than his status as a trained killer presents him to be. Continuing with the combat (because, honestly, that was the lion’s share of the episode’s content – not complaining either; I loved it!), the showdown between Oliver and Diaz is a real beatdown, but not in a good way; Ollie gets his tuckus handed to him on a silver platter, a china platter, a cheap Wal-Mart platter, you name it – his ass was on it. Diaz has upped his game since their last confrontation at the end of Season 6, and the enhancements that the gangster has made make a world of difference in the flow and control of the fight. It isn’t until (in true underdog fashion) near the final moments of the confrontation that Oliver gains the upper hand and bests his foe (hopefully) once-and-for-all.

As stated above, “The Slabside Redemption” is focused solely on Oliver getting revenge on Ricardo Diaz and gaining his freedom, and it doesn’t really tell many stories beyond that. Again, not a bad thing in this particular case – in fact, it’s rather refreshing. The team-up of Oliver and Ben Turner brings to light the ways that Oliver’s time in Slabside has changed him. Turner himself notes this change to Oliver while they’re preparing to storm Diaz’s inmate-ridden cafeteria holdout, offering that the “old Green Arrow” saw the world as only black and white, while the new one can see shades of gray and that accounts for how well he’s able to work together with the former Suicide Squad member. There’s weight to this statement, as Turner and Ollie’s acquaintanceship goes back as far as Season 2, and the history there speaks volumes for the validity of Turner’s statement. Stanley had always seemed just a little… off to me; just a tad too excited to see violence wrought upon those whom he saw as in the wrong. Not a Joker-class nutcase, but he’s definitely not playing with a full deck either. His quick turn, however, from creepy wannabe sidekick to outted serial killer could have used just one more episode to make the change even the slightest bit more gradual, and I would have preferred they found a way to start it one more week prior. It’s a little odd that he’d just stab Brickwell at the end; however, that would fall in line with the idea that he thinks he’s doing the right thing and being a hero like Green Arrow and killing those who are evil. So far, this season has barely had any true ties to the Green Arrow: The Longbow Hunters graphic novel, but this revelation of Stanely as a serial killer is, while a loose one, perhaps one of them.

“The Slabside Redemption” is rife with action from start to finish, with an entertaining team-up, and a satisfying end (hopefully) to Oliver and the rest of Team Arrow’s battle against Ricardo Diaz. However, there is one glaring issue that I have with “The Slabside Redemption,” and that’s how Oliver gets out of his cell. I said I’d come back to this earlier and here we are; I am fully cognizant of the… narrative liberties that TV shows and movies need to take at times to move the plot along, but Oliver conveniently having all the requisite components to blow the lock on his cell is stretching the boundaries of even my imagination (and I’ve been reading comic books for years, mind you). Maybe it truly is a minor gripe, and given how entertained I was throughout the episode proper, I suppose it’s a drop in the bucket. It does result in a comedic exchange between a newly-teamed-up pair of Oliver and Ben Turner, wherein Ollie suspiciously questions the Bronze Tiger on how he got out of his isolated cell, to which Turner responds with a shrug and “How did you?”

Arrow gives at least this fan what he's been waiting for: a returned focus on the titular character. The fast pacing of the airtime-length fight through the prison, mixed with great interactions between Oliver and his limited-run teammate, Turner, were great fun and brought a levity to the otherwise graphic and high-energy plot. The biggest questions that loom are how will Oliver's incarceration affect his Green Arrow activities, and how will this new Green Arrow interact with him?