REVIEW: Arrow – Season 7 Finale Episode 22 “You Have Saved This City” 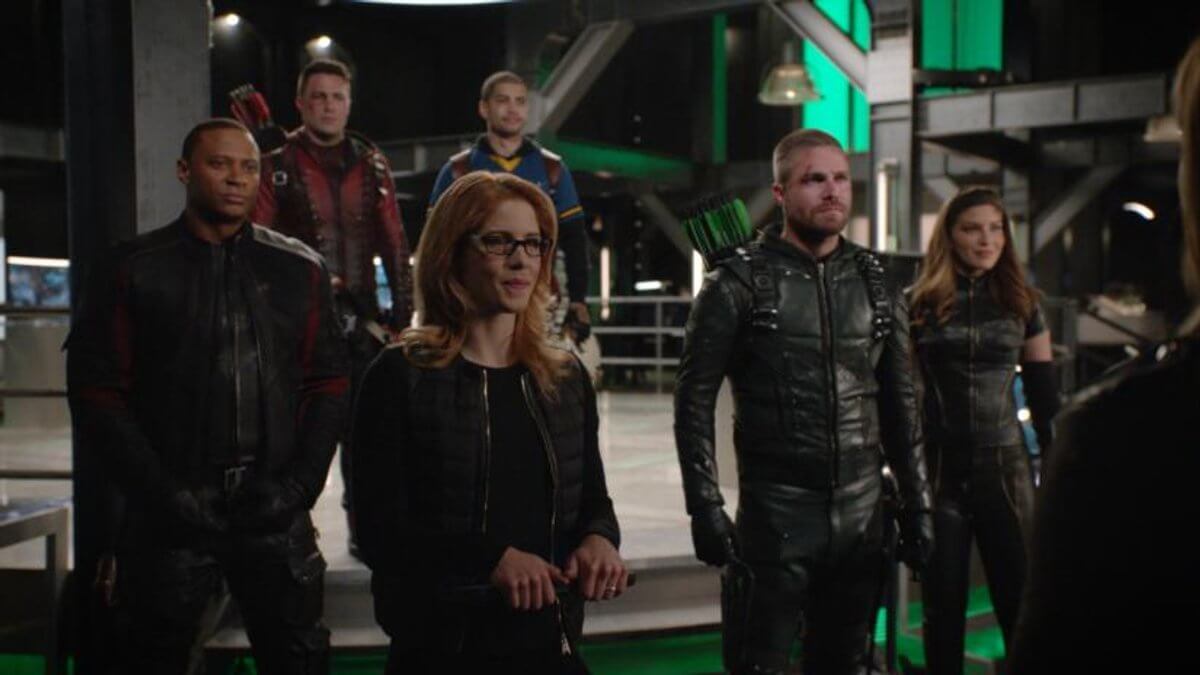 Well, there we have it. The finale to Arrow’s penultimate season is finally behind us. This season has been building up to a lot of plot threads between two separate timelines and several characters within each. The question ultimately is, did the finale, “You Have Saved This City,” bring a satisfying wrap to these stories? My answer is a bit of a politician’s one, and that’s “Yes and no.” On the one hand, the overarching narratives being told are tied off, and that includes both present and future. On the other, however, very few individual character arcs feel like they’re given much of a wrap-up at all, almost to the point of needing a few more episodes. But I’m getting ahead of myself. When we left off last week, Team Arrow was at a standoff with about a dozen of Star City’s finest on a rooftop. Dinah attempts to talk the lieutenant down and convince him that they need to go stop the real threat to the city (which, suffice to say, is not the band of masked heroes). Oliver realizes that the conversation is going nowhere fast and elects to fire off an explosive arrow, which acts as a smokescreen for the team to all simultaneously leap off of the building and zipline down to safety in a quite dramatic, if a bit cheesy with the visual effects, fashion. With that, it’s time to regroup and reassess their game plan, as now they’re once again wanted criminals as far as SCPD is concerned. Don’t we all just love when a plan goes awry?

Luckily for the rest of the team, Felicity calls in a couple of favors from Washington D.C. and Earth-Two by the names of Curtis and Laurel to provide backup on what is to be their final mission together and to put an end to Emiko and the Ninth Circle’s designs for destroying Star City. On the topic of the secretive organization, the other council members don’t seem to think too fondly of Emiko’s obsession with ruining her brother Oliver’s life from top to bottom. They find it too messy, chaotic, and distracting from their ultimate goals, regardless of the fact that Emiko is their current leader. It would appear that, for the Ninth Circle, the duty to the cause supersedes loyalty to whoever sits at the head of the table at any given time. This loyalty piece is on full display in “You Have Saved This City” when the team tracks Emiko to Palmer Technologies (formerly Queen Consolidated). Oliver chooses to 1v1 his dark side sister while allowing the rest of Team Arrow to evacuate the building’s civilian occupants. A collective of Ninth Circle agents and pawns converge on the team’s position, and we get a cool extended fight scene with John, Dinah, Roy, Laurel, and a surprise guest party member in Ben Turner (aka Bronze Tiger) all kicking some serious ass. At the same time, Emiko and Oliver are surrounded by an equally large group of Ninth Circle assassins, including a pair of high-ranking ones. They voice the Circle’s displeasure with Emiko’s obsession and attempt to kill both her and Oliver. The estranged siblings set aside their differences and take on the lot of them. The scene of Ollie and Emiko putting aside their differences felt a bit hollow for me, and unfortunately, I think that is on Sea Shimooka’s shoulder in this case. I found it difficult to take her emotions seriously. Ultimately, the team succeeds in stopping the group from killing the city, and Emiko is killed by one of the Ninth Circle assassins, but dies with perhaps a dash of redemption on her soul and conscience.

Interestingly enough, “You Have Saved This City” also sets up what will be the end of the show with the fall’s half season and Oliver’s inevitable death. As I’ve been hypothesizing since the Elseworlds event, it has everything to do with Crisis on Infinite Earths and the deal Oliver struck with the Monitor in the former. Once everything quiets down, and Ollie and Felicity have been in their new secluded home in the woods (for an unspoken number of months, though we do see baby Mia’s birth), the multiversal watchman shows up in their home and tells the former Green Arrow that it’s time he makes good on their bargain. Felicity isn’t exactly keen on this idea, but Oliver explains that he chose to trade his fate for the lives of both Barry and Kara, and the entire multiverse. Kissing his wife and baby girl goodbye, Oliver leaves with the Monitor to prepare for the coming crisis. This brings about a few things, one of which being that the next crossover event will be virtually nothing like its comic book counterpart in that both Barry Allen and the original Supergirl were killed in that event, whereas it would appear that their fates are, at least for now, uncertain. Secondly comes the question of what the next season of Arrow will actually entail. Will it focus on Ollie and his working with the Monitor leading up to the big event? Or will it focus on the team he and Felicity left behind and we won’t see Stephen Amell until the aforementioned crisis? 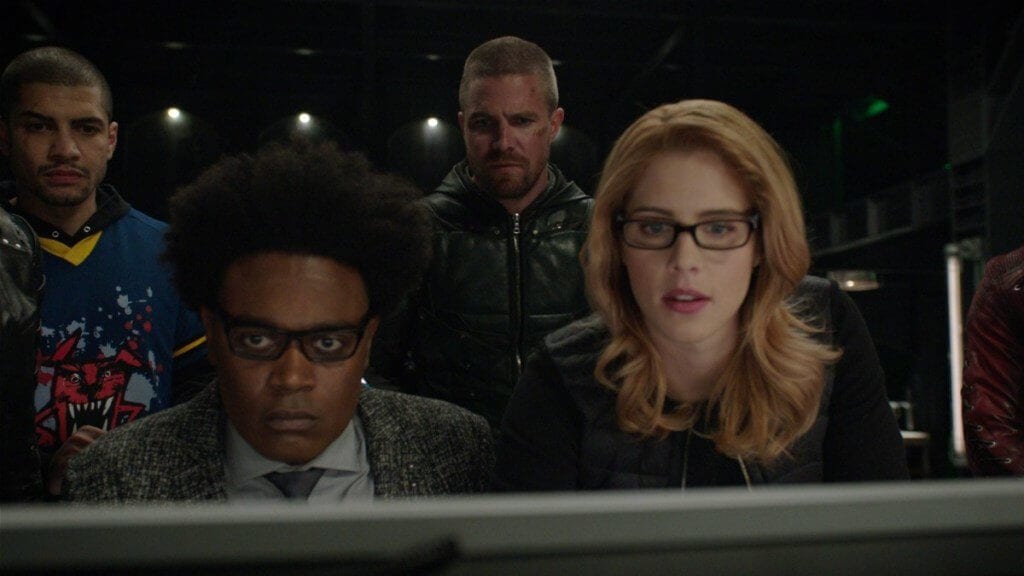 In a less-satisfactorily tied-off finish, the future timeline also appears to have run its course. The team surmises that, thanks to Mia not having any sort of registry within ARCHER’s database, that Felicity may be able to throw the AI system for a loop and give the rest of the team an opening to shut it down for good and avoid seeing Star City and the Glades turned into a full-on police state. As a certain chilly captain on The Flash once said, “Make the plan. Execute the plan. Expect the plan to go off the rails. Throw away the plan.” And just as with the wrap to the present arc, that’s pretty much what happens, as Felicity’s idea winds up not panning out and, instead of crashing altogether, ARCHER simply reboots, and the team is forced to contend with the AI supersoldiers Galaxy One has developed. The fight is certainly cool enough, and Old Man Roy getting a piece of the action is great in and of itself, but it doesn’t present the Zeta soldiers as much of a threat, or at least not nearly to the degree that their introduction had suggested they would be. In any case, the day is saved after a (mostly) hard-fought battle, and Dinah, Roy, and Felicity all leave the restoration of Star City to the younger generation of heroes. The only thing worthy of note here is the paralleling of Felicity leaving William and Mia, and Oliver leaving her and baby Mia. The final scene between Oliver and Felicity is really touching and heartfelt, and showcases Amell’s emotional range, which he surprises us with from time to time. Apparently, Ms. Smoak made her own deal with the Monitor at some point, and he arrives to take her to finally be reunited with her husband – a happy ending?

This season attempted to weave a lot of different character arcs into two separate timelines, and ultimately, while the overall plots were wrapped up satisfactorily, I think that too many loose ends were left over with regards to the individuals within. I would have liked to find out what happened to Diggle in the future, as well as learn more about what got each of the members of Team Arrow to where they were when we found them there, grey hair and all. As Roy tells William near the end of “You Have Saved This City,” when asked about how he wound up on Lian Yu in the first place, “That’s a long story.” Well, it was too long a story for the writers to tell us as well, because we got bupkiss.

Arrow - Season 7 Episode 22 "You Have Saved This City"

While as a single episode, "You Have Saved This City" had all the makings of greatness with its blend of action and emotions, in the context of being a season finale (one which I have been increasingly concerned about over the last few weeks), it falls short by failing to bring enough closure to many of the individual character plots contained within this season.