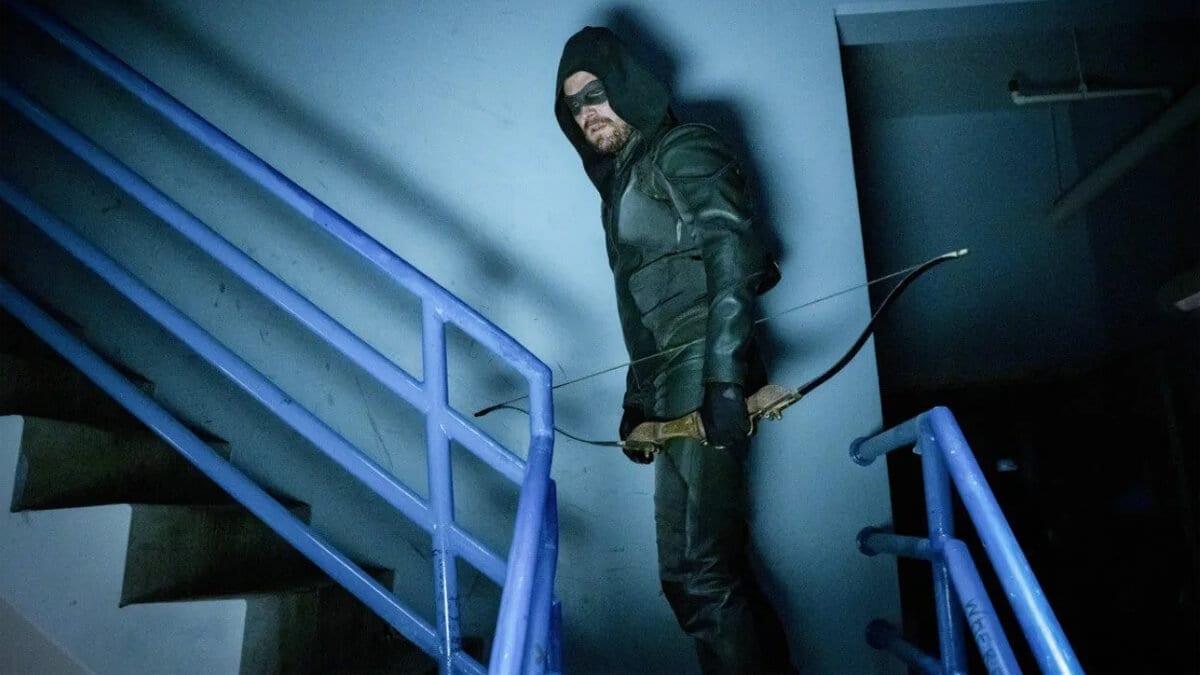 Arrow season 8 was something I initially felt was unnecessary. Given how season 7 ended, it almost felt redundant in my mind. Whatever plot threads that were left could’ve been wrapped up in the “Crisis on Infinite Earths” crossover. All of this is to say that season 8 had a lot to prove to justify its existence. I’m pleased to announce that, based on season premiere “Starling City,” it does so in spades.

“Starling City” opens in much the same way the pilot did seven years ago, with Oliver being found on the Earth-2 version of Lian Yu, this time anchored by a somewhat clichéd narration from Lamonica Garret’s Monitor. Our Emerald Archer is brought back to Starling City, where he’s reunited with his mother Moira, Malcolm Merlyn (who is now his stepfather rather than Walter Steele), and  his best friend Tommy, who is later revealed to be this world’s Dark Archer as a result of Thea’s death from a drug overdose. After a heart to heart with Moira, Oliver goes to the headquarters of what is now Merlyn-Queen Enterprises looking for the Dwarf Star project. There, he runs into Black Siren and the Hood, who, on Earth-2, is Adrian Chase. After he brings Laurel up to speed (in a scene featuring the return of the salmon ladder), Oliver goes to confront Malcolm, thinking that he is the Dark Archer, only to run into the Monitor, who reminds Oliver why he is here, saying that the Dwarf Star particles are only found on this Earth.

After talking with Malcolm, Oliver comes upon a Felicity lookalike who tells him that Curtis runs the IT department. “Starling City” then cuts back to Malcolm and, much in the same way he did in season 1 with Moira, the Green Arrow attacks his stepfather, only for Tommy to step in as the Dark Archer. After an interrogation by Detective Dinah Drake, Moira hires Diggle to protect Oliver, who quickly discovers that this is Diggle from his own Earth. After they catch up with each other, they go to Oliver’s welcome home party, which he once again escapes and, much to Digg’s chagrin, renders his former bodyguard unconscious as he goes after Tommy. With Rene’s help, Tommy knocks Oliver out and chains him up, just as our hero was in the first season finale. As the two friends/stepbrothers confront each other, Oliver deduces that Tommy wants the Dwarf Star particles to initiate his own version of the Undertaking and destroy the Glades.

Oliver frees himself with Digg’s help and finds Adrian and Laurel so they can figure where Thea died in the Glades to pinpoint Tommy’s location. After another fight, Oliver talks Tommy out of destroying the Glades. Later, Adrian tells him he knows Oliver is from another Earth thanks to a Sherlock Holmes quote told to him by a certain Caped Crusader. After going to see Tommy and saying goodbye to his mother, Oliver and Digg prepare to leave, but Laurel arrives to warn them that the city is under attack. Suddenly, Earth-2 begins to disappear. Oliver, Digg, and Laurel escape just as the screen fades to white. Interspersed throughout “Starling City” are scenes featuring the future Team Arrow, as the four of them must learn to work together while they face Diggle’s other son JJ and the Deathstroke Gang. Here’s hoping we get more insight into what happened between the Diggle brothers over the course of the final season. 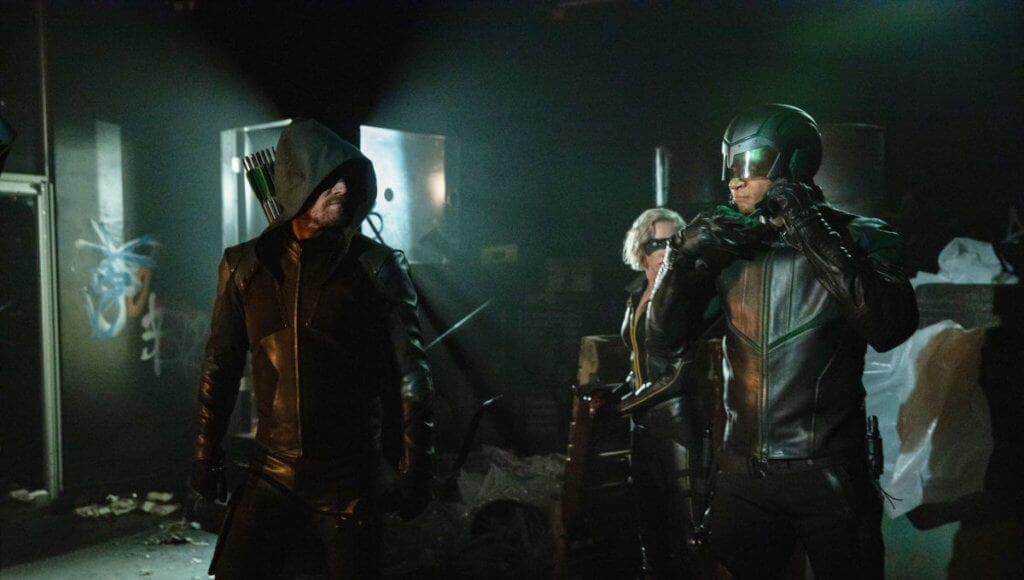 Over the summer, Stephen Amell said that the Arrow season premiere would be an ode to the pilot and season 1. In many ways, this tribute was achieved, as “Starling City” celebrates the best of what the first season had to offer, whether through the dialogue or the scenes themselves. Amell seems to relish the opportunity to revisit the premiere season and brings into sharp focus how much he has grown as a leading man over the years. He peppers his performance with bits of raw emotion that show the audience the weight Oliver now carries as he must ostensibly live out his final days without his family and friends. This becomes a point of contention between Oliver and Diggle, as the latter does not believe the Emerald Archer’s future is written yet and tries to pull his friend away from his seemingly nihilistic perspective on the situation. Speaking of Diggle, David Ramsey’s performance here is fantastic and assists in bringing the history of these characters to the fore while also ensuring that they move forward. Tommy’s role in “Starling City” is very well-drawn and is his most meaty guest spot since his original exit in season 1. That being said, there are a couple of performances that don’t work, particularly those of Juliana Harkavy and Rick Gonzalez, who are used as little more than glorified extras. Going into this season, it was something of an open question of how some of the series regulars were going to fit in, and the use of Rene and Dinah proves that, at least for now, there really isn’t a good role for the two characters. This is especially disappointing in light of Harkavy’s upcoming spinoff, so hopefully, this changes in the episodes ahead.

Despite these underserved characters (and some minor inconsistencies compared to our previous visits to Earth-2), writers Beth Schwartz and Marc Guggenheim do a great job of capturing the feel of the earlier seasons while still moving the show forward as the Arrowverse heads towards the most epic event DC television has ever had. It’s especially gratifying to see that Guggenheim is involved, given not only his status as co-creator and co-writer of the pilot but also how involved he will be with both the crossover and the Arrow series finale – which, according to his Twitter account, he began writing on Tuesday. Director James Bamford, who started as the stunt coordinator for the show, gives the action of “Starling City” a fluidity for which Arrow has become known. It’s great to see that all the creatives who have come through this show have bought their A-game to the final chapter.

Overall, “Starling City” is a solid opener for Arrow’s last season that more than proves the validity of season 8. Many creatives have come through the industry via this show, and it’s great to see that experience come to the fore via the likes of Stephen Amell, James Bamford, and Beth Schwartz. I can’t wait to see how the rest of this final season unfolds.

"Starling City" is a solid opener for Arrow's last season that more than proves the validity of season 8. I can’t wait to see how the rest of this final season unfolds.