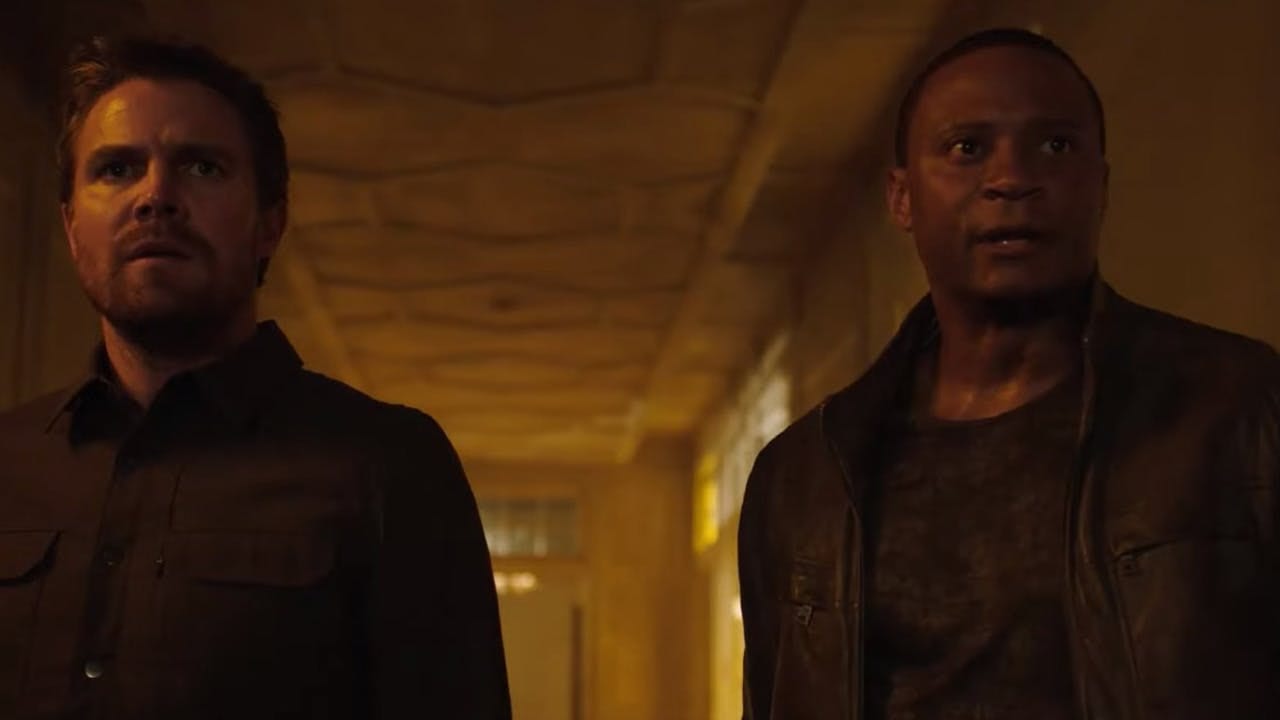 Last week on Arrow, our heroes escaped Earth-2 as it disappeared. With Stephen Amell saying that episode 2, titled “Welcome to Hong Kong,” would be an ode to season 3, considered by some fans to be where the show began to falter, I was curious to see how that would play out.

“Welcome to Hong Kong” (a nod to Amanda Waller’s words to Oliver in the final scene of season 2, setting up the following season) opens on Oliver dreaming. We see flashes of Tommy, Felicity, his parents, and the original Laurel, as the Monitor appears to reprimand him for interfering with the people of Earth-2. Oliver demands to know where Earth-2 went, and the Monitor tells him it disappeared. Oliver’s next target is Raymond Wong, but the Monitor refuses to tell him why. As Digg begins knocking on the door, the Monitor warns Oliver not to disobey him again. Digg tells Oliver they have to get out of there, and, after a fight, Oliver goes outside to discover that they are in Hong Kong. Laurel, distraught over the disappearance of her Earth, does not listen to Oliver as he tries to explain what’s going on and leaves the group, trying to find somebody local to fix the breach device, as Central City is too far away. Oliver and Digg make their way to an Argus hideout in search of info on Wong and, after finding what they need, get attacked by a gang, only to be saved by Tatsu. Tatsu leads them to an underground hideout, where she explains that she has become a vigilante. Oliver fills her in and, having heard of the Monitor, she offers to help. Meanwhile, thanks to a connection she has via Cayden James, Laurel and Lyla, who has joined the fray seemingly at Diggle’s request, get a tech guy named David to fix the breach device.

“Welcome to Hong Kong” then rejoins Oliver, who, after looking at his ring and thinking of Felicity, goes after Wong, which leads him, Diggle, and Tatsu to another confrontation with China White, whom everyone had believed was in Argus custody. As they try to figure out what the triad is after, Laurel tests out the breach device, but David confirms that there is no sign of life coming from Earth-2. An alarm sounds and Lyla and Laurel have to leave. Elsewhere, Oliver, with Digg and Tatsu in his ear, discovers a recreated Omega Virus. Our titular hero takes the virus and tries to use it as bait to get Wong. After Lyla and Laurel discuss survivor’s guilt and how it’s difficult to deal with, Oliver and Tatsu talk, with the latter telling him there’s always a choice and he doesn’t have to follow the Monitor blindly. Oliver goes to meet China White and keeps her talking while Digg and Tatsu look for Wong, who is soon bought on to the scene with a bomb strapped to his chest. A fight ensues, and with a little help from Lyla and Laurel, Oliver gets hold of the virus and Wong, but not before China White nearly kills Tatsu, something Laurel prevents. Oliver decides that, before the mission continues, he needs to figure who the Monitor is, and decides to go to Nanda Parbat to look for answers. The episode ends with Lyla talking with the Monitor, thus alluding to her future role as Harbinger in the crossover. Interspersed with the main storyline in “Welcome to Hong Kong” are scenes with Future Team Arrow, as Connor tries to talk to JJ, only for the latter to capture William, which ties Mia’s hands, as she is unwilling to risk her brother’s life. 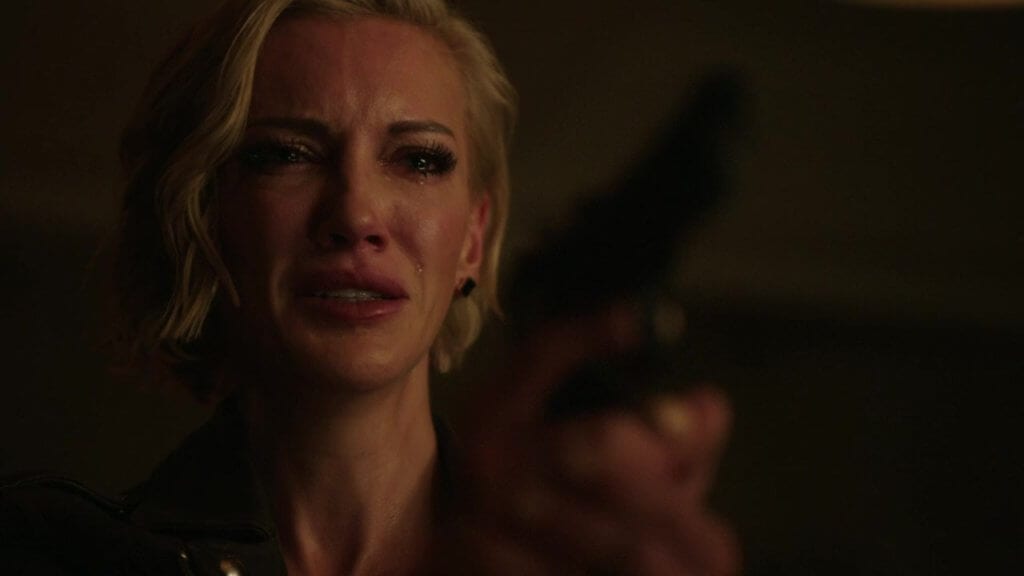 Stephen Amell once again gives an excellent performance as Oliver, as Tatsu tries to sell him on finding a different way to prevent the Crisis. From the opening frames of “Welcome to Hong Kong,” you can feel the weight Oliver feels once again, so it’s satisfying when Oliver decides he isn’t going to be so accepting of whatever the Monitor says going forward. In addition, the performances of Katie Cassidy and Kelly Hu are also very good. Cassidy imbues Laurel with so much pain and anger, really showcasing a range that I would argue has all too often been underutilized. It’s great she’s getting something juicy to play ahead of the upcoming prospective spinoff Green Arrow and the Canaries; here’s hoping this continues throughout the remainder of the mother-ship series. Seeing Kelly Hu back for the final season was a real treat, particularly given the fact that the character was one of the first villains Oliver ever faced, having first shown up in the second episode of the series. China White was also heavily featured in Green Arrow: Year One, the inspiration for Arrow. She portrayed this character quite well, and I can’t wait to see what she does next. Special mention also needs to go to Rika Fukushima. Tatsu has always had a somewhat murky place in the series, given that she had been utilized in the DCEU movie Suicide Squad, so I’m glad that, with the character no longer on the big screen, she was allowed to make a curtain call on Arrow. Writers Jill Blankenship and Sarah Tarkoff expertly move Oliver along on his final journey, weaving in nods to one of the more divisive seasons of the show and bringing characters like China White and Tatsu full circle. There was always a specificity to Hong Kong’s aesthetic on Arrow, and director Antonio Negret recaptures that, facilitating some of those season 3 highlights Blankenship and Tarkoff pepper in throughout this entry.

“Welcome to Hong Kong” is another great episode of Arrow. With terrific performances from Stephen Amell, Katie Cassidy, Kelly Hu, and Rika Fukushima, Blankenship and Tarkoff highlight what made season 3 work, something that will no doubt continue next week as they seemingly do an homage to the present-day story of that divisive season. Although the season so far has focused on fanservice, showrunner Beth Schwartz is ensuring that the show moves forward as the Arrowverse continues its march towards “Crisis on Infinite Earths” ahead of an Arrow series finale shoot date of October 31st. Hopefully, this trend continues, as Willa Holland makes her return as Thea Queen next week.

Welcome to Hong Kong" is another great episode of Arrow. With terrific performances from Stephen Amell, Katie Cassidy, Kelly Hu, and Rika Fukushima, Blankenship and Tarkoff highlight what made season 3 work, something that will no doubt continue next week as they seemingly do an homage to the present-day story of that divisive season.