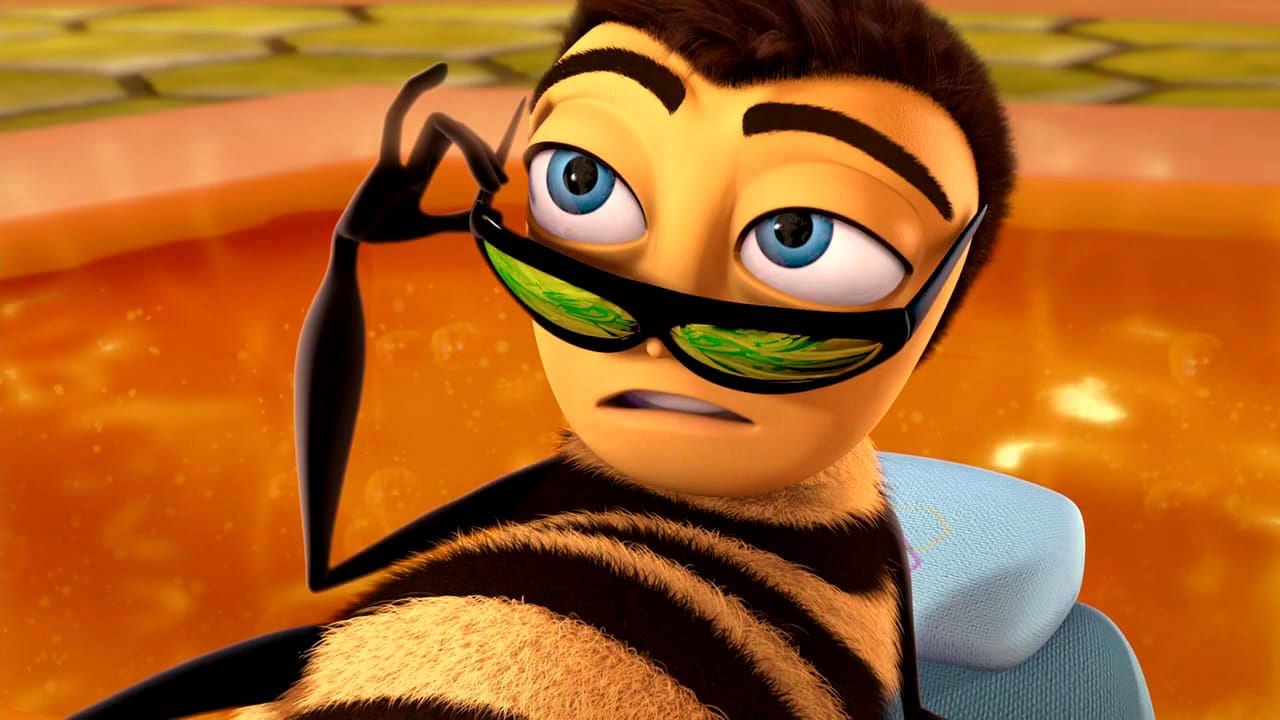 In 2007, following the release of Shrek the Third, DreamWorks Animation would do the unthinkable and make a film that’s arguably even worse. The meme formerly known as Bee Movie is a 90-minute adventure comedy starring Jerry Seinfeld as a bee named Barry. The film was a middling box office success but received poor reviews from critics and most moviegoers. Bee Movie has mostly become a joke now, and people rarely discuss it in serious critical terms. I never cared for Bee Movie as a kid, but my brother did. Having not seen it in about thirteen years, I tried to be as open as possible and give the film a second chance to appeal to my significantly changed taste in movies. Let’s have a look.

Barry B. Benson (Jerry Seinfeld) is a pretty standard honey bee. He lives in a hive with his parents (Kathy Bates and Barry Levinson), the Queen, and millions of other bees just like him. It’s his graduation day, and, along with best friend Adam (Matthew Broderick), he eagerly awaits his chance to pick his job and start his adult life. However, Barry quickly learns that most of the jobs available are less than appealing, and he’ll be stuck with the one he picks for the rest of his life. Barry takes a dare from some police bees to join them on a journey to the human world. There, he breaks off from them and meets Vanessa Bloome (Renée Zellweger) and her boyfriend Ken (Patrick Warburton). Exploring the human world leads Barry to conclude that bees are being exploited by humans for their labor and honey. With the help of Adam and Vanessa, Barry resolves to take the human race to court. However, Barry didn’t account for the consequences to both the humans and bees, and he soon has a bigger problem on his hands. 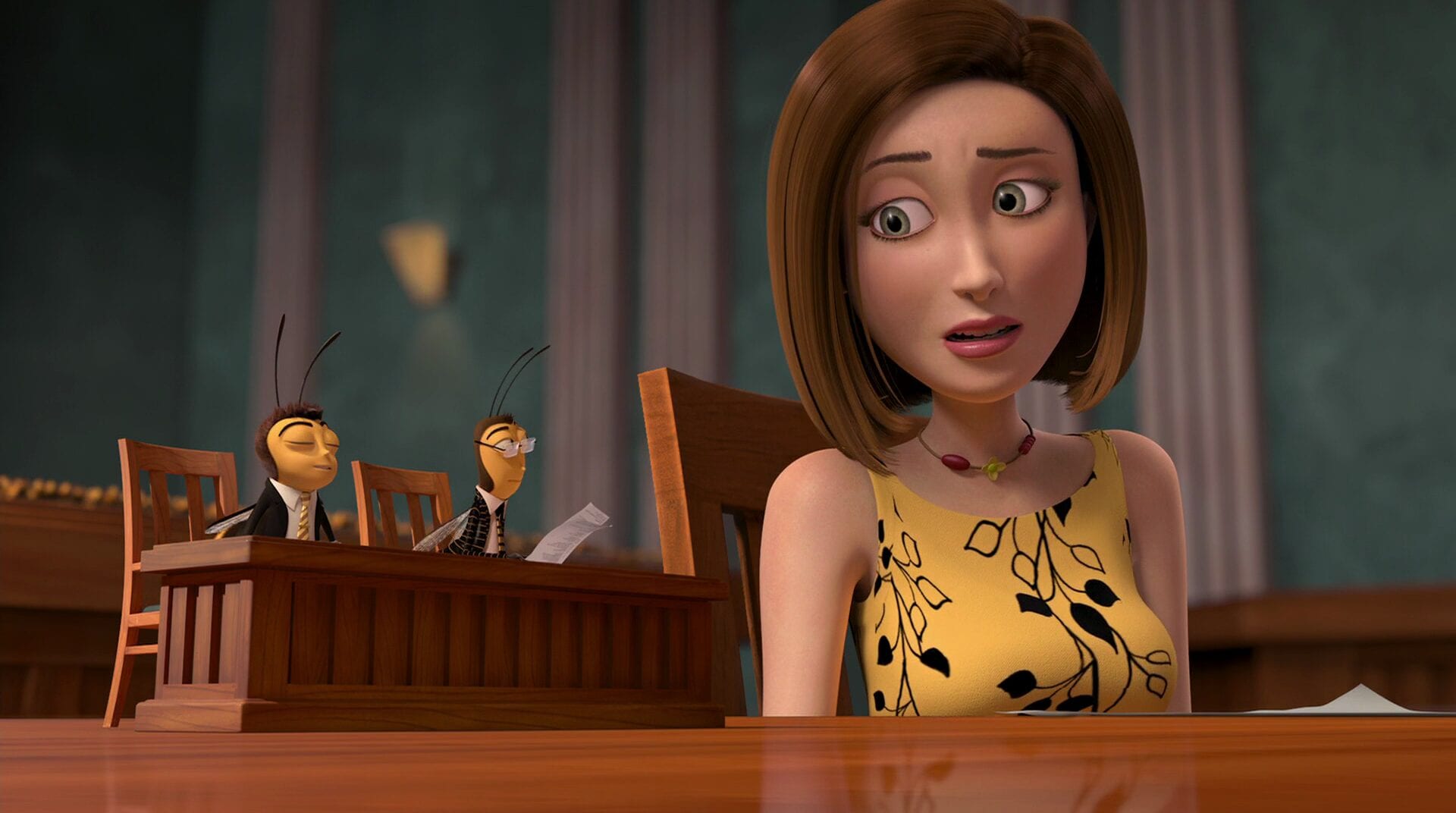 The animation in Bee Movie is strange. The textures range from terrible to serviceable, but I don’t like the character designs at all. I find the insect creatures creepy and unappealing, and I think this could have been avoided, as there have been animated movies about bugs before this one. The human characters are unsettling as well, with their matchstick limbs and oversized heads. Not all of the characters look like this; some counter-examples include John Goodman’s portly lawyer Layton Montgomery and Patrick Warburton as Ken. I also found the celebrity cameos creepy. I didn’t need to see Ray Liotta and Sting in this animation style, and now I can never unsee them. I do like the film’s vibrant color palette, though, as well as the film’s score by Rupert Gregson-Williams. This isn’t the best score I’ve ever heard, and I doubt you’ll be humming it after the movie ends or anything, but it is pretty good. And I want to give credit where it’s due, especially where there’s so little good to be found. 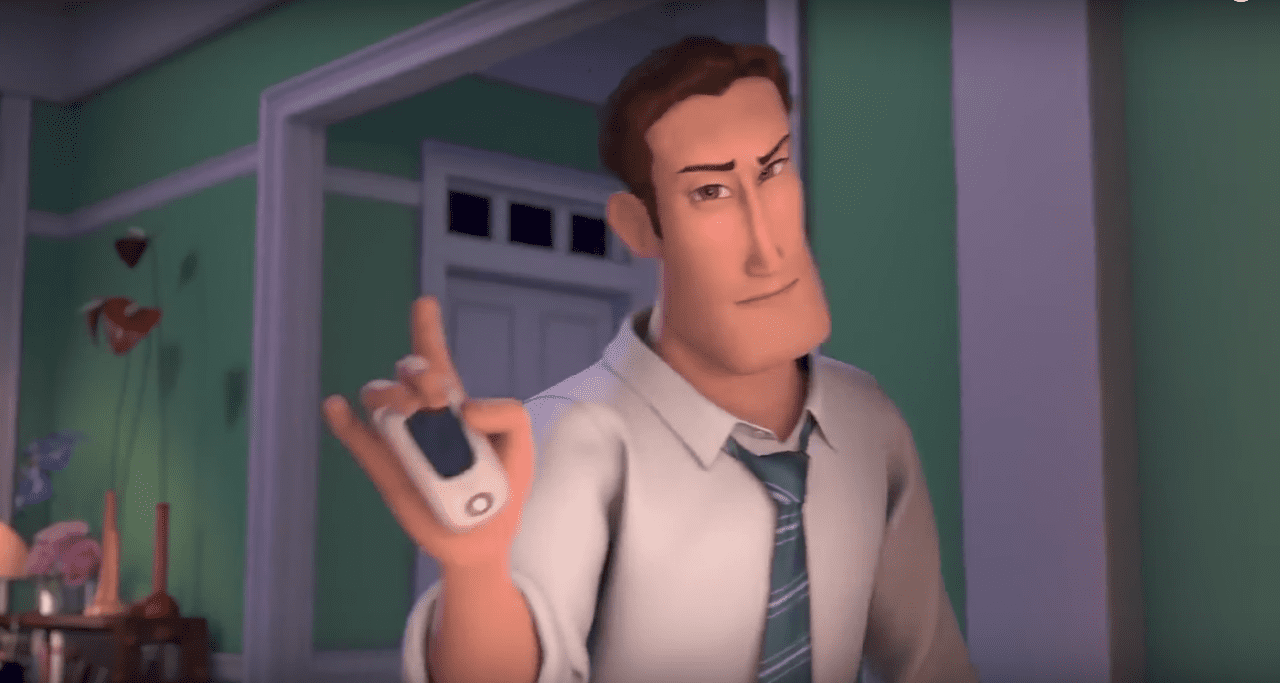 The vocal performances also aren’t very good, at least for the most part. Jerry Seinfeld thinks he’s much funnier as Barry than he really is. I didn’t laugh at a single line in this film, and there are quite a few jokes and one-liners. Renee Zelwegger just sounds dumb as Vanessa. In fairness, the character’s actions come off as pretty dumb anyway. I don’t think this was the filmmakers’ intent, and it doesn’t make for an enjoyable or sympathetic character. In addition to being the stuff of nightmares visually, Sting and Ray Liotta’s cameos aren’t very funny. They really thought it was hilarious that his name is Sting and bees sting. Bee Movie is very committed to bee puns, and they’re usually predictable and cringy. They go for the lowest hanging fruit every time. John Goodman is okay as Layton Montgomery, but come on; it’s John Goodman. I’ve never seen/heard a bad performance from him. 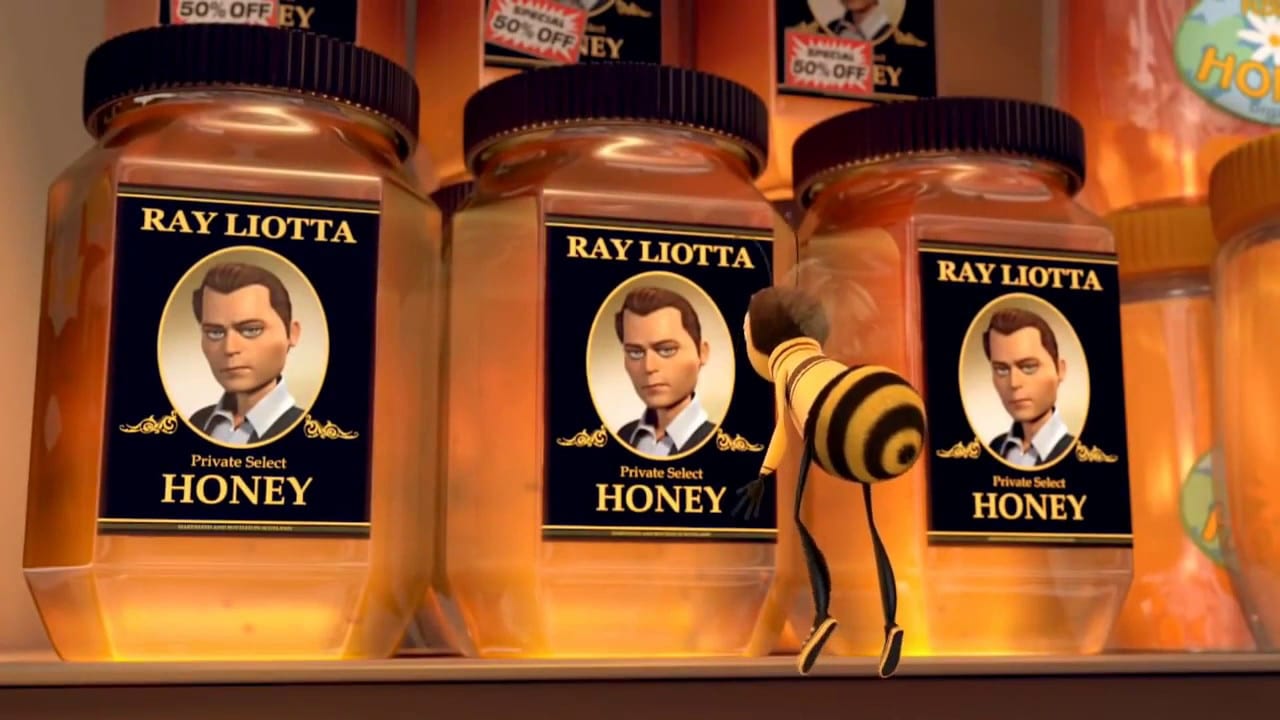 My favorite character in Bee Movie is actually Vanessa’s boyfriend, Ken. Patrick Warburton gives the best performance in the film, low bar though that may be. The movie portrays him as a huge jerk who Vanessa is always shooing out the door. Honestly, their dynamic reminds me of Belle and Gaston from Beauty and the Beast, except that Ken is pretty funny and also the only sane person in this movie.  They’re also in a relationship, so it’s unclear why Vanessa treats him this way. He isn’t the nicest guy in the world, but I have to say, I think anyone in a serious long-term relationship with someone would be pretty upset if they left them for a bee. For that matter, the trial scenes brush off the logistical and ethical concerns of this human/bee union like it’s ridiculous. I think it would have been better if the film simply didn’t go there. For one thing, it’s just not a funny scene at all. But even worse, these are valid concerns, and it’s the relationship itself that is ridiculous. It’s not like Barry will become human – or vice versa – because of their love; this is just an impractical situation to get into. I don’t know if this was intended as an allegory for interracial marriage or something, but it fails miserably if so. It would also be pretty offensive to compare that to bestiality. For that matter, Bee Movie also has a theme of saving the environment and supporting the bees. This would have been more apt, but it’s not even hinted at until the end and feels half-hearted. The real-world implications and weird stuff in this movie would be easier to forgive if it was funny or enjoyable, but it’s not. 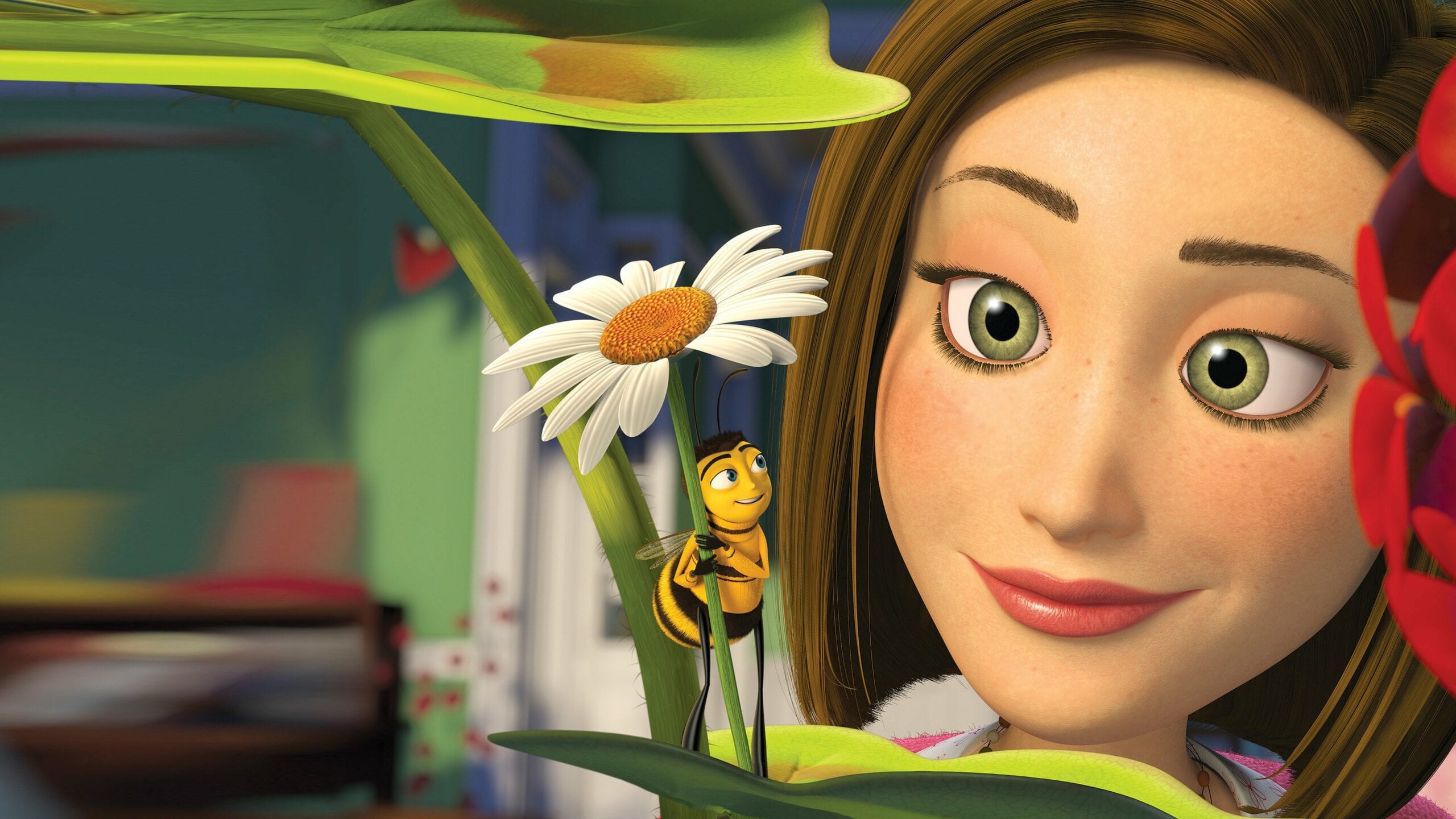 Bee Movie is truly a baffling film to experience. From the unlikable characters to the unsettling animation, I don’t understand what they were going for here. The jokes aren’t funny, there are no interesting relationships between the characters, and Ken is the only believable character in the film. There are rare saving graces, like the musical score and Patrick Warburton’s performance, but overall, I think it’s safe to skip this one.

Bee Movie is truly a baffling film to experience. From the unlikable characters to the unsettling animation, I don't understand what they were going for here. The jokes aren't funny, there are no interesting relationships between the characters, and Ken is the only believable character in the film. There are rare saving graces, like the musical score and Patrick Warburton's performance, but overall, I think it's safe to skip this one.

You know this was the first movie I was introduced to Ray Liotta. I never really liked the movie either despite having Matthew Broderick and Patrick Warburton. Who wouldn’t like him. I agree with the animation and I kinda thought Over the Hedge and a couple future films by DreamWorks had that kind that I thought was strange as well.

I had seen Liotta in Goodfellas and I remember being baffled to see him depicted here and looked up if he really played himself. Thank you for reading and commenting!