The American release of Studio Chizu’s dazzling anime spectacle, Belle, has finally arrived. Loosely based on Beauty and the Beast, Belle is a stunning reimagining of the French fairy tale. Released in Japan on July 16, 2021, Belle made its U.S. debut on January 14, 2022. From director Mamoru Hosoda (Mirai, The Boy and the Beast), the film is a sensory feast, boasting top-notch animations and a soundtrack that rivals the Disney adaptation. That said, this isn’t the Beauty and the Beast you remember…

Suzu is a seemingly average high school student living in a rural village. Shy, disconnected, and struggling to be herself after a past traumatic experience, Suzu keeps her friends and family at arm’s length. Once passionate about music, Suzu now finds herself unable to sing. But that all changes when she enters a massive virtual world called “U,” a place where people can be anyone.

Creating an online persona, Suzu becomes “Bell” (the English name for Suzu), a beautiful and globally adored singer. But when one of Bell’s concerts is interrupted by a mysterious monster, Suzu must embark on a journey to find out who or what “the beast” is. 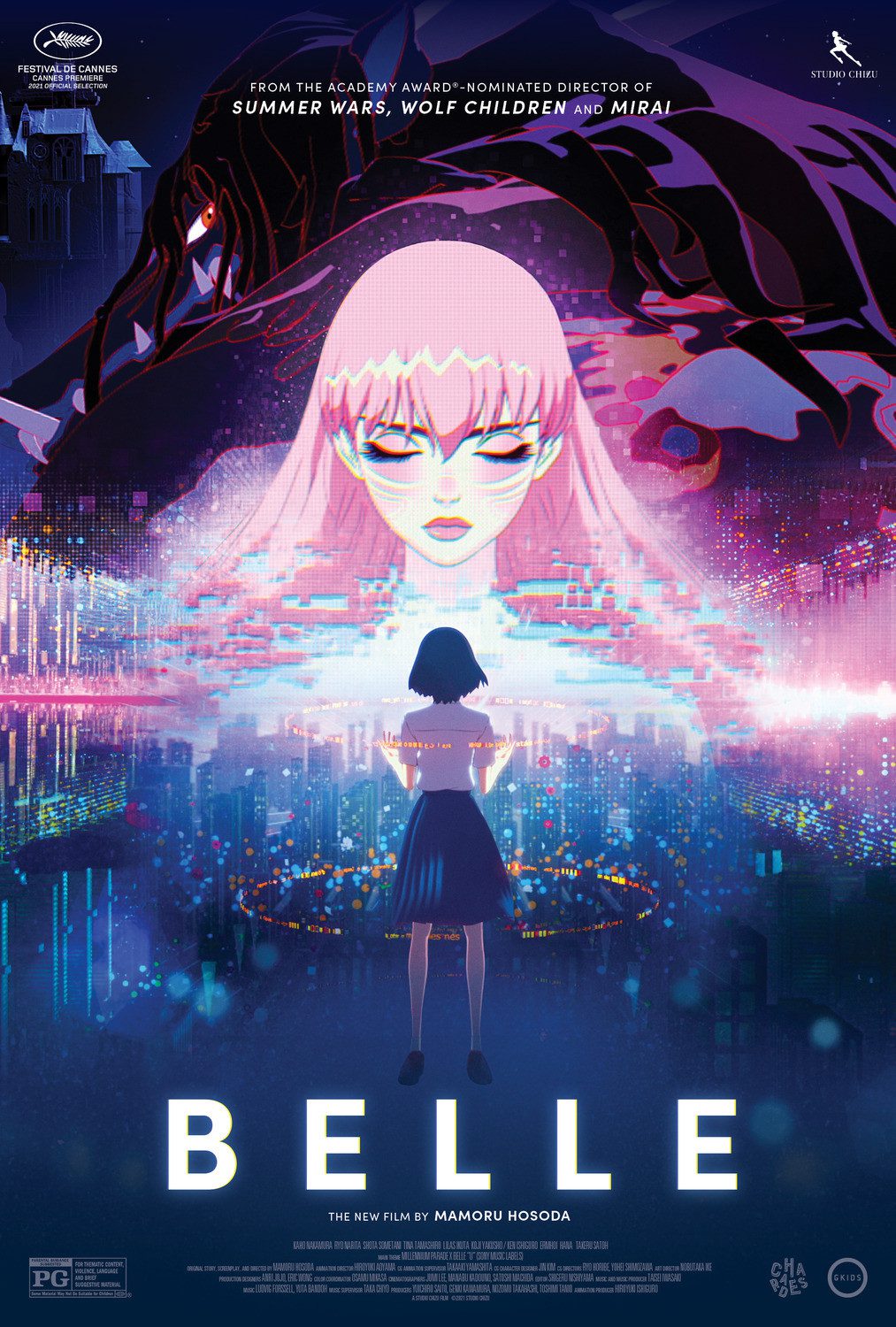 First, let me just state the obvious: this film is gorgeous. The blend of 2D and 3D animation (used to contrast the two different worlds) is spectacular. Suzu’s world is depicted in beautiful 2D animation, with all the subtleties you’d expect from a Studio Ghibli film. On the other hand, the world of U is vibrant and bombastic. The 3D animation makes it feel epic and larger than life, even though it’s technically flatter. This is no doubt thanks to Eric Wong, an architect and designer who was brought in by Mamoru Hosoda to help bring the 3D world to life. And, boy, did he ever; Belle is a visual masterpiece.

And yet somehow, the visuals take a backseat to the music. If Belle’s animation is the star, its soundtrack is the hotter, wittier co-star that steals the show. And, like I said, the animation is incredible. From arena anthems like “U” (fittingly titled) to heartfelt endeavors like “A Million Miles Away,” every song is a hit. And whether you watch the film in Japanese or English (I’ve seen it in both), the songs are just as amazing. Both voice casts do a superb job bringing the characters and the songs to life. Kaho Nakamura voices Suzu in Japanese, while Kylie McNeill voices the role for the English version. As I said, everyone is brilliant, but Kaho and Kylie are the standouts, in my opinion. Also, both actresses sound startlingly similar (especially when they sing). They both sing in an operatic manner, which is a big reason why the songs resonate on such a deep, emotional level.

Finally, we have a modern animated soundtrack that wasn’t written by Lin-Manuel Miranda. Seriously, go listen to it on Spotify (or wherever you can find it). You’ll be glad you did. With breathtaking visuals and powerful, anthemic songs, Belle is truly a spectacle of a film. No matter what screen you watch it on, the movie feels like an IMAX experience. But even with all the flair and pizazz, Belle remains grounded. Like many of Hosoda’s previous works, the characters are still the primary focus. And, ultimately, it’s Suzu’s struggles that drive the narrative.

But how, exactly, is Belle like Beauty and the Beast? Well, mostly… it’s not. There’s a girl named Bell. There’s a beast. There are catchy songs. That popular Disney ballroom scene (where Belle and the Beast dance) is recreated in an admittedly strange way. But that’s about it.

Unlike the Disney movie, Suzu isn’t captured by the Beast or made to be his prisoner. Instead, Suzu is the prisoner of a very different monster: public opinion. Whether it’s classmates or internet trolls, everyone seems to have an opinion on how Suzu should live her life. She is praised and ridiculed by the world for singing as Bell in U. She is applauded and despised by her classmates for her close relationship with Shinobu, a popular boy that Suzu likes. Even her best friend Hiroka constantly reminds Suzu of what a meek and mousy girl she is.

The beast is placed under similar scrutiny, hunted by a group of vigilantes that deem him a monster. The vigilantes, as well as the online community (basically social justice warriors), demand that the beast reveal (or “out”) his real-world identity. The characters in the film all expect things from Suzu and the beast, demanding that they live a certain way. But why must the beast reveal who he is? Why must Suzu bend to society’s expectations of her? Does she owe them something? I think Hosoda’s point is that she doesn’t. And neither do we.

I don’t usually enjoy “messages” in films. But this is one I can certainly get behind. Also, Hosoda’s social commentary is presented subtly and often through a comedic lens, which makes it a lot more palatable. I do have a few gripes with the film – namely, the mechanics of U. How characters interact with the virtual world is almost completely glossed over. With naught but her phone and some headphones, Suzu is able to fly, sing, and zip about the world of U as if she were in “the OASIS” from Ready Player One. Perhaps this is Hosoda’s way of implying just how far technology has come. Maybe one day, integration between our world and the virtual one really will be this seamless. Regardless, it’s confusing, and some explanation would have gone a long way.

As much as I enjoyed the few (and I mean few) references to Beauty and the Beast, I think Belle could have easily done away with the parallels. There really weren’t enough of them to justify this being an “adaptation.” Belle works beautifully as a film in its own right. And it offers enough fresh ideas that it didn’t need to draw any comparisons to the French fairy tale (or the Disney movie). That said, I know how marketing works, and Beauty and the Beast puts butts in seats.

Belle might not scratch your Beauty and the Beast itch if you’re looking for a close adaptation, but it’s one of the best anime films I’ve seen in a while. With stunning visuals and a phenomenal soundtrack, Belle is a cinematic experience unlike any other.

With stunning animation, grounded characters, and a soundtrack that feels straight out of a virtual world, this film is a sensory feast, worthy of the full IMAX experience.