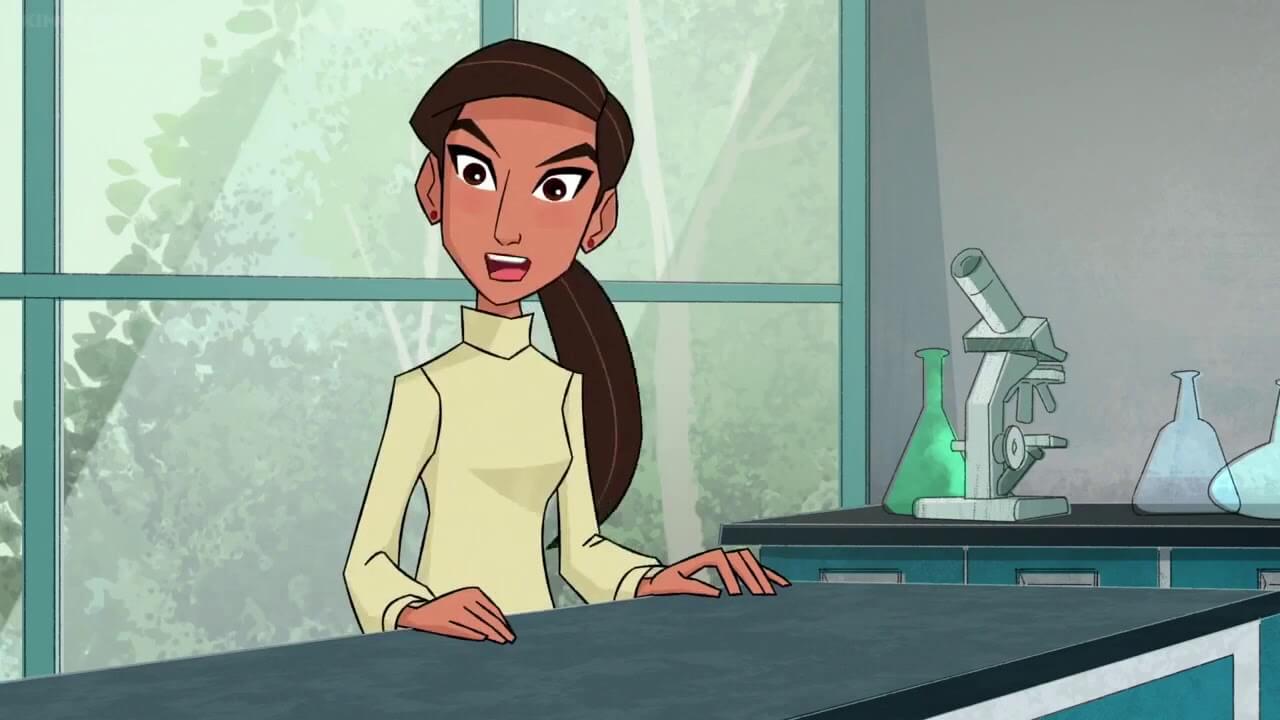 In “Small Hiro One,” Hiro and Baymax check out a warehouse and eventually find Yama with a bot he’s built from a stolen alloy. Baymax summons the others, and while they best the robot, Yama escapes. A famous scientist named Trevor Trengrove comes to give a presentation at the college, but Hiro isn’t permitted to attend because he’s under 16. Instead, Granville assigns Hiro to assist Wendy Wower, another scientist who’s visiting and presenting to the younger kids (and Fred, who’s a fan of hers). He finds out that Wendy went to college with Trevor and that they were lab partners. Trengrove slowly boots all of the audience until only Honey, Gogo, and Wasabi are left.

Hiro sees Yama at the school and asks Fred, Wendy, and the kids for help. Wendy and the kids show Yama and his men their volcanoes to distract them, but Yama sees Hiro anyway and follows him inside. Trengrove has been working for Yama the whole time and has been trying to use the heroes to build a robot for him. They’ve inadvertently made Yama’s robot much tougher, and formidable against their fighting styles in particular. In the end, Fred and Hiro defeat the robot with vinegar and baking soda, essentially turning him into a mini-volcano. Trengrove reveals that he was working for Yama because he had evidence that Trengrove’s work was stolen from Wendy. Wendy also tells Hiro that Professor Granville was her mentor.

In “Kentucky Kaiju,” Fred and his friends are in line for a movie of the same name, with Fred saying that this will be his 6th time seeing it. However, as soon as the theater doors open up, Globby attacks a bank, and the heroes have to jump into action. Globby tells Hiro that he’s useless without his friends, then leaves the scene. Hiro begins brainstorming to make himself stronger, eschewing Baymax’s advice that he eat protein and work out. Fred purchases an animatronic of Kentucky Kaiju used in the movie, but it’s smaller than he anticipated. Honey informs Hiro that Noodle Burger Boy is back and stronger than ever, and again the heroes battle the mouthy mascot. With his newfound suit-endowed abilities, Hiro easily defeats him. 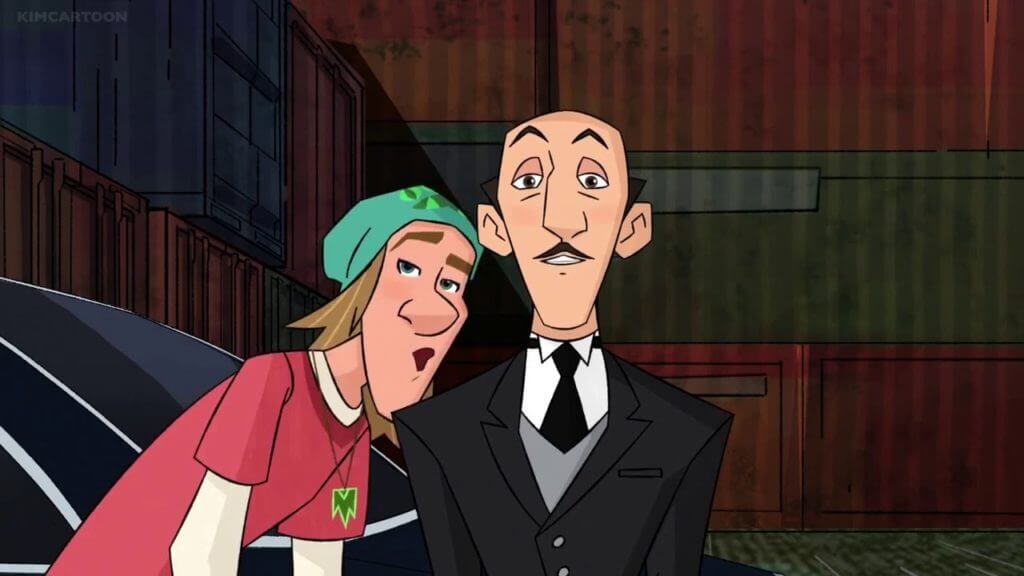 However, in his personal life, the new suit he’s built presents some challenges for Hiro. He’s unable to control its strength, breaking tables, ripping doors off hinges and annoying Karmi as usual. Even with the help of his friends, Hiro is unable to remove the suit. Mysterious villain Obake is in Cass’ cafe spying on Hiro, who decides to go to Fred’s to find a comic book solution to his problem. Fred leaves Hiro alone and his dad calls, concerned to find Hiro instead of his family. He tells him to find his natural strength rather than focusing on super strength. Later, the heroes are summoned to the docks to meet Fred. He reveals to them his new Kentucky Kaiju, a 1:1 scale replica of the one in the movie. Noodle Burger Boy shows up and takes the lizard over, heading for the city. He implants a code from Obake into the lizard, turning it evil. Hiro is forced to face the lizard without his strength as his suit malfunctions. He ultimately takes it down from inside.

“Small Hiro One” and “Kentucky Kaiju” are both very entertaining, with good character moments, comedy and action sequences. I have a strange nitpick here; I think both of these should have been called “Small Hiro One,” maybe as parts 1&2. “Kentucky Kaiju” has the subplot with Fred being obsessed with the movie, but overall, this episode seems squarely focused on Hiro and his own fear of inadequacy or rejection. In that sense, the two episodes feel like companion pieces.

“Small Hiro One” plays out somewhat predictably, but it’s a lot of fun nonetheless. The first time Wendy mentions knowing Trengrove I was sure she was the real genius, especially with the way he was treating the students he was supposed to be encouraging. I’m intrigued by the positive light Wendy casts on Granville, and I wonder how that might come into play with Hiro. It also changes the way the audience sees Granville’s choice to have Hiro work with Wendy. It still feels a little forced to have Yama pose a major threat to the team and the city, but I’m willing to accept that he somehow got mixed in with Obake. 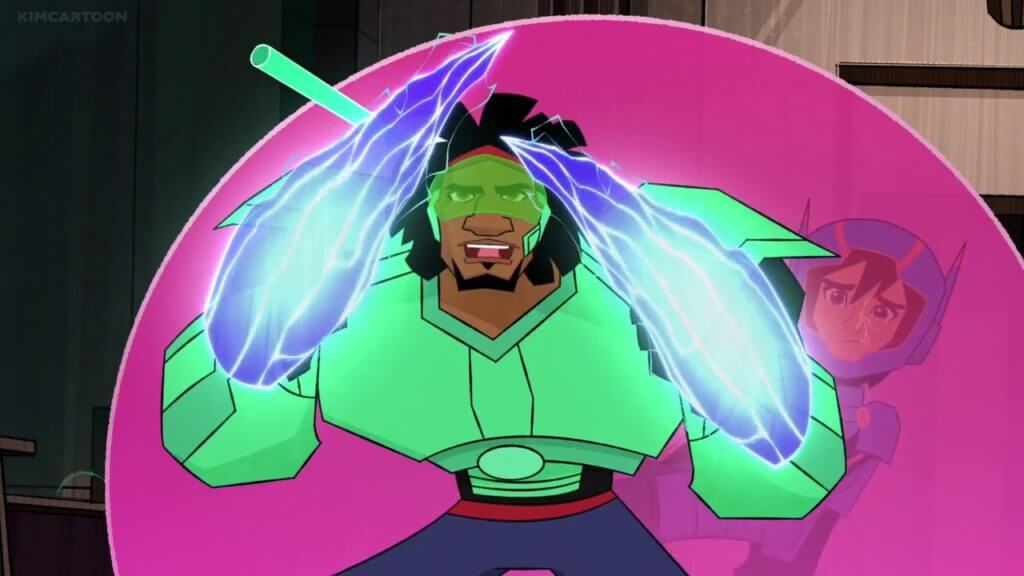 It’d be interesting to know exactly how those two met and why they want to work together, even if it’s just a shared hatred of the heroes. Although it was only one line, Gogo’s comment about Trangrove being cool for a “male scientist” annoyed me. I have been pleased with them dropping her “woman up!” catchphrase from the first movie, so naturally, a comment like this irked me a little. Is Gogo a sexist? Is this supposed to be funny because she’s a female superhero, and for some reason only likes to see women succeed? It’s grating and cements her as my least favorite of the 6. It’s not funny or charming, so it’s just a throwaway line that serves to annoy anyone who’s not either a radical feminist or a child who finds these sorts of things amusing.

“Kentucky Kaiju” is a lot of fun too, and I do like Fred’s subplot. I also enjoyed the scene with his dad. This character is used sparingly, and it’s always something good. I love that they modeled him on Stan Lee and that Lee provides the voice. It’s funny when he calls the security on Hiro while still encouraging him to find his strength. I’m glad Noodle Burger Boy came back so soon. This character is ridiculous and silly, and I love it. It’s enjoyable to see Obake manipulate the heroes and villains from afar, but I can’t wait to see him actually do something himself. I also like Hiro’s suit and the concept of him searching for an ability, although he ends up deciding that being a boy genius is his thing after all.

I really liked both of these episodes. I have a few nitpicks but all things considered, Big Hero 6 knows what it wants to be, and it knows how to have fun with the characters and scenarios. I look forward to the inevitable confrontation with Obake.

Big Hero 6: The Series - "Small Hiro One" and "Kentucky Kailu"

“Small Hiro One” and “Kentucky Kaiju” are both very entertaining, with good character moments, comedy and action sequences. I really liked both of these episodes. I have a few nitpicks but all things considered, Big Hero 6 knows what it wants to be, and it knows how to have fun with the characters and scenarios.