REVIEW: Big Hero 6: The Series – Episodes 9 and 10, “Aunt Cass Goes Out” and “The Impatient Patient” 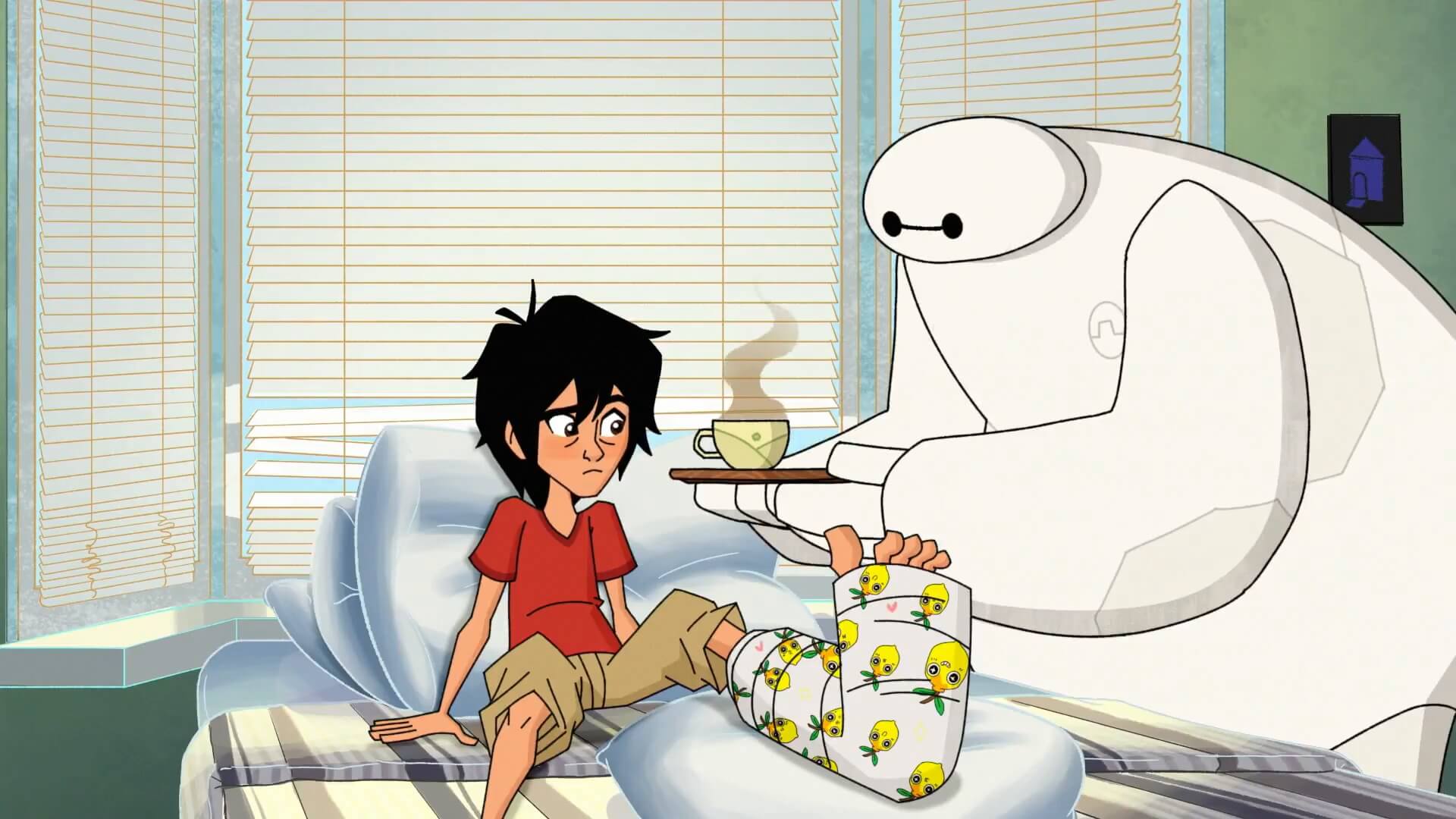 In “Aunt Cass Goes Out,” Hiro barely makes it home for movie night, worrying that Cass will find out what he’s doing. Krei reveals a new product called the Buddy Guard that can turn invisible, change the user’s appearance and protect them. Hiro decides to find a date for Aunt Cass to distract her from his frequent absence. Krei shows up to Hiro’s lab, blackmailing him into hiding one of the Buddies, as the others have gone off programming, destroying property and hurting people. As he’s about to leave, Aunt Cass comes in and they instantly hit it off. They plan to go out, much to Hiro’s dismay. He decides to follow them on their date while his friends try to figure out how the Buddies work. Fred spills a soda on the Buddy, causing it to malfunction and attack the group. Mel, the man who originally designed the technology behind the Buddies, shows up, ties Krei up and takes his place. Baymax spots the impostor and Hiro finds the real Krei. Together with the rest of the team, they pursue the impostor to Kreitech and Krei promises to delay sale of the buddies due to their design flaws, then unleashes them on Mel. However, the sprinklers go off, interfering with the Buddies again, and soon Krei, Mel and the heroes are all running. The heroes dispatch them and Mel is arrested.

In “The Impatient Patient,” Krei transfers money to an unknown buyer and a mysterious group of people say they’ve found their target. Hiro and Baymax fight them off, but in the process Hiro falls into the river and subsequently catches the flu.  The villains, who call themselves the Mad Jacks, report to the mastermind behind Yama, Globby et al. He chides them for losing to a child and commands them to “finish the job.” Hiro goes to the doctor, who competes with Baymax to get a word in regarding the diagnosis and treatment. The Mad Jacks resurface and kidnap Krei from his office. Hiro tries to fight them, but breaks his leg in the process. Hiro’s friends scold him for sneaking out and Baymax again insists that he rest and have some fluids. However, he’s woken up by a call from Krei asking for the team’s help. The rest of the heroes go out and Hiro sends a suit out, controlling it remotely and fighting alongside his friends. The heroes return the chip to Krei, but when he plugs it into his computer it’s revealed that not only is there nothing on it, but the villain staged the whole thing and now has access to all of Krei’s files. One of them reveals Hiro’s secret identity. 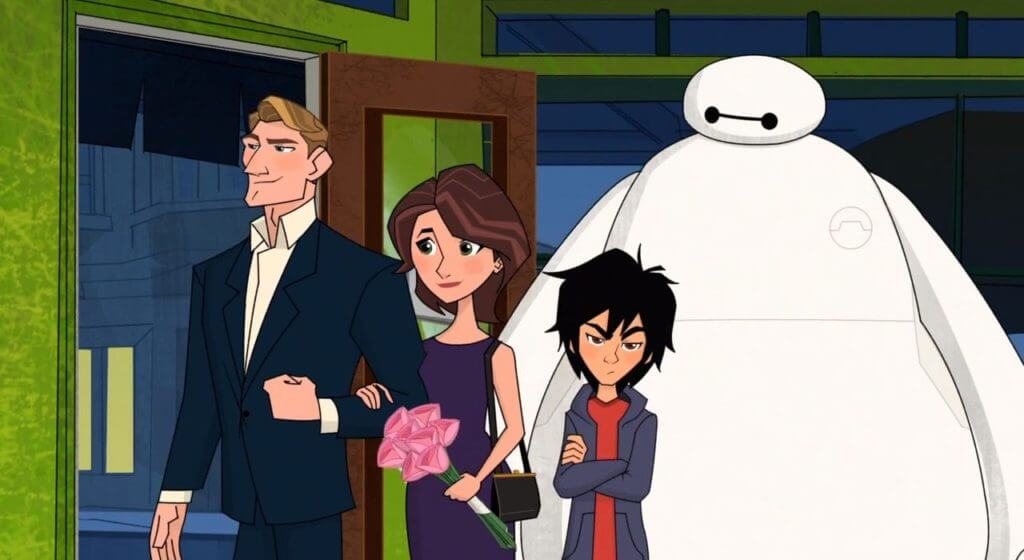 I had expected “Aunt Cass Goes Out” to be more like “Food Fight” and focus on Cass, being that her name’s in the title. I appreciate how they’ve developed the side characters this season for the most part, and I would like to know more about Cass as a person. Having her go out on a date seems like the perfect opportunity to explore her personality and maybe get some comedy in, but they chose instead to focus on Hiro and how he feels about her going out. Of course, Hiro and Baymax are the main characters of the series, like they were in the movie, but “Food Fight” and “Fred’s Bro-tillion” focused on their featured characters more than Hiro. I don’t think this is a bad episode; I’m just puzzled by the choice to make it about Hiro when it sounded like it wouldn’t be, and it shouldn’t be.

I do like that we get more time with Krei in this episode, though he comes off as something of a caricature at times. Interactions with his assistant are particularly bad for this, in both episodes as a matter of fact. But any time he interacts with Cass is great. If they really wanted to do something with this, she could confront him about his unethical business practices, or maybe they could even connect over being entrepreneurs (granted on very different levels, as she points out). Alan Tudyk is pretty good in this role, and I’m glad they kept the character from the movie. At times it just feels like they’re making him into a stereotypical rich guy rather than digging deeper or trying to make him interesting. If they gave him an ongoing relationship with Cass and maybe some development over the season, it would make him and the show better. For the most part, “Aunt Cass Goes Out” is just action and comedy with a mischosen protagonist, but it is harmless enough, and I had fun, though it’s probably not an episode I’ll be revisiting often.

“The Impatient Patient” seems to have a bit more going on, with the Mad Jacks creating some interesting fight sequences and Krei again getting a lot of screen time. I like the Mad Jacks and I hope they recur in the series. We don’t learn anything about them in “The Impatient Patient,” but I love their catchphrases, costumes and theme song. These guys are just so over-the-top I can’t help but like them. Krei is better in “The Impatient Patient,” although, as I mentioned, they make him a bit too exaggerated and stereotypical at times. The best scenes with him are when he’s experiencing some genuine emotion, like when he decides to bypass safety protocols with the chip out of fear. This seems like a legitimate reaction coming from someone who’s been kidnapped and threatened; he’s too paranoid to even seek help from his own people, and it ends up being his undoing. 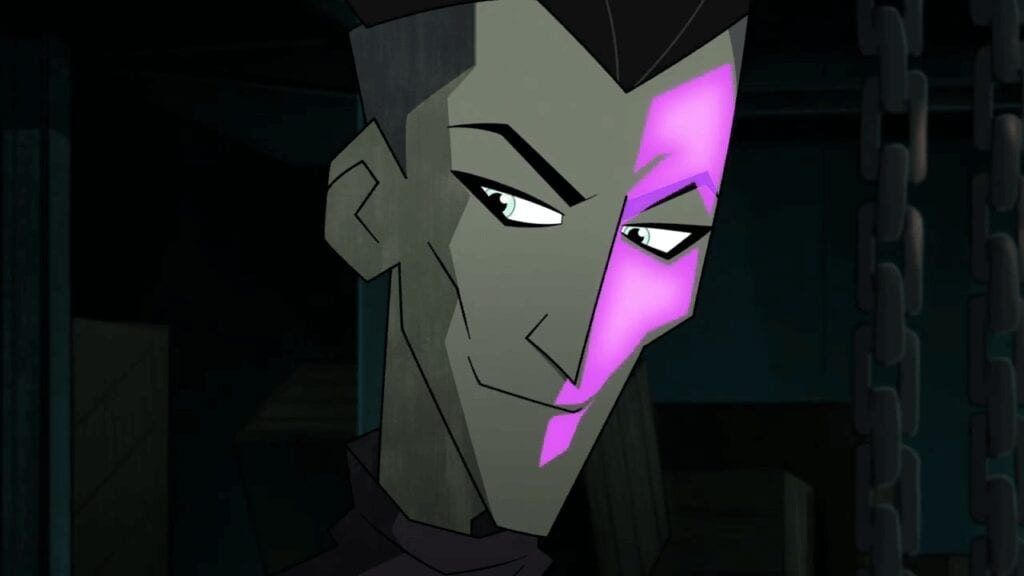 Watching “The Impatient Patient” is frustrating at times because Hiro just never seems to learn. His intentions are admirable, but how does he expect to fight three full-grown adults alone and with flu symptoms? His attempts to avoid following advice from his doctor, Baymax and his friends are also annoying. It’s like this kid is trying to get himself killed. They could make this more sympathetic by emphasizing Hiro’s need to help people, even Krei. However, “The Impatient Patient” make it seem like he just can’t resist the action, and he comes off as childish. He is a 14-year-old boy, but he’s also a college student and a superhero. It just makes one wonder why he’s so careless, and if he’ll eventually work past it.

I did enjoy both episodes, although I’m more satisfied with “The Impatient Patient.” It’s good to see more of the main villain, and his plan is finally starting to become clearer (but we’re not there just yet). I really enjoyed Krei in these episodes as well; I just wish they’d reveal more about his background and personality outside of being rich. When the veneer cracks, good things happen with this character. So far, Big Hero 6 isn’t a perfect show, but overall I would say, “I’m satisfied with my care.”

Big Hero 6 - "Aunt Cass Goes Out" and "The Impatient Patient"

I did enjoy both episodes, although I’m more satisfied with “The Impatient Patient.” It’s good to see more of the main villain, and his plan is finally starting to become clearer (but we’re not there just yet). I really enjoyed Krei in these episodes as well; I just wish they’d reveal more about his background and personality outside of being rich. When the veneer cracks, good things happen with this character.