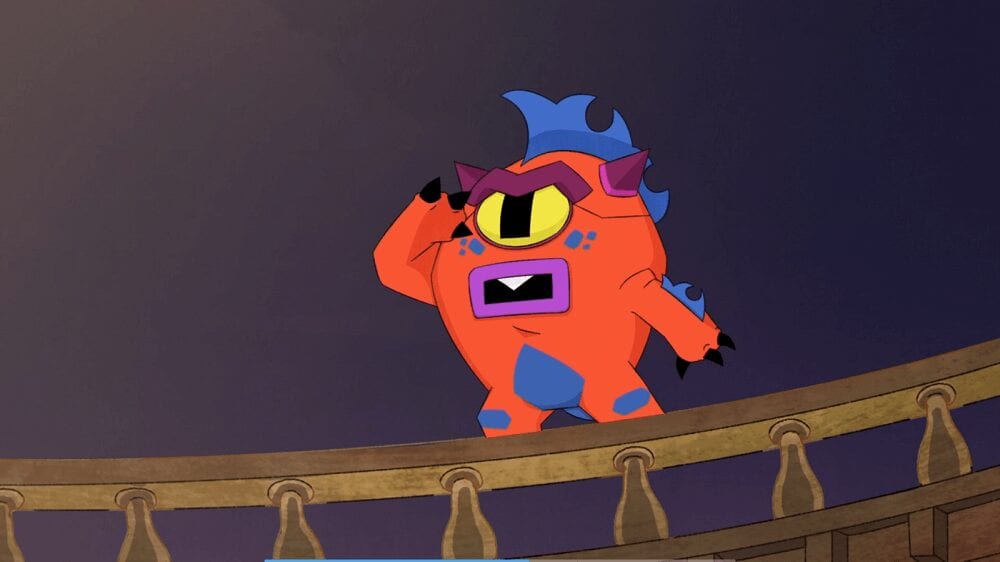 “Maybe we could call her Half-Voltage. Ooh, or Low Voltage!”

“Big Hero 7” opens with a rather silly fight sequence in which High Voltage steal a new battery Krei has developed, but not as a team. The mother-daughter duo are feuding, but they take both batteries he has and leave. In Cass’ cafe, the heroes are eating when Richardson Mole shows up. He and Fred argue about how to pronounce “Globby” before he finally announces that he’s buying the lot next door to the cafe to build a museum. The team hears about High Voltage, and Gogo and Fred intercept the mother in the police station, but she escapes and traps them.

Fred goes to Richardson’s comic shop and the latter claims to know Big Hero 6, calling Fred’s alter-ego “Lizard Guy.” Fred lets slip that he’s the hero and that his name isn’t Lizard Guy, only realizing afterward what he’s done. Richardson makes a deal with the team to keep the secret: first, he asks for a date with Gogo, but she declines mid-sentence. He instead accepts some of Fred’s rare comics. High Voltage continue to fight, wrecking a coffee shop as they argue over musical styles.

Richardson decides that he wants one more thing, demanding to be part of the team and to breathe fire like Fred. However, he doesn’t seem to be as apt at controlling the suit, destroying the topiaries in Fred’s mother’s garden. The team heads out in pursuit of High Voltage with Richardson in tow. At first, they only find the mother, but daughter Juniper shows up quickly, aiming at her mother as often as at the heroes. Juniper reveals that she’s really upset because her mother stole her move, and the mother says she did so because she’s no longer able to do her own high-kick move. Fred saves Richardson, prompting Richardson to thank him but say he’ll still reveal the team’s secret. However, he’s struck with electricity from an orb High Voltage was trying to steal from him, effectively erasing his memory of their alter egos and the battle. 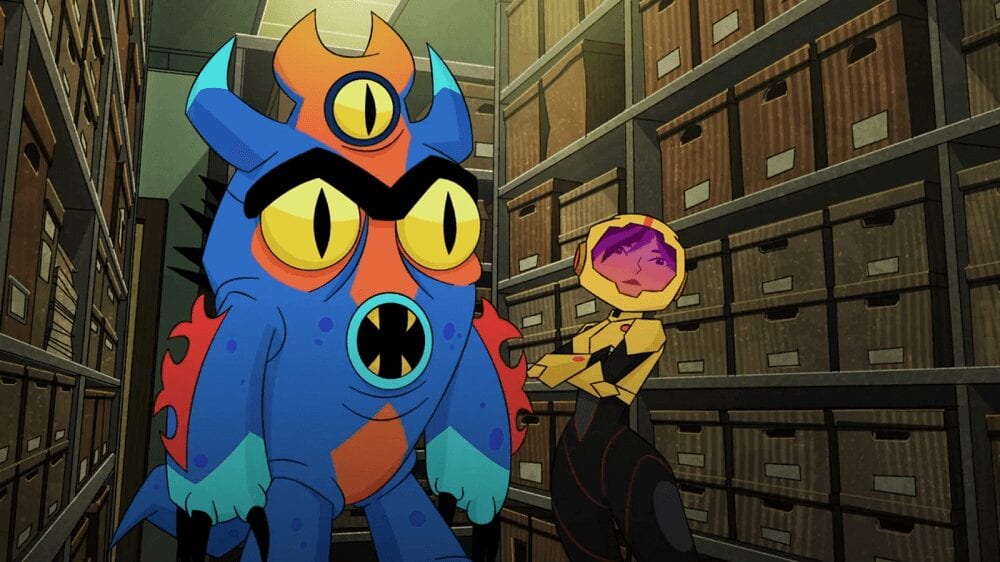 Over and over I’ve said how great Big Hero 6: The Series is and what a great job they’ve done with the story and characters. Well, after “Big Hero 7,” I’m reminded that nothing is perfect. I’ve been begging my husband to watch this show with me and give it a chance; he liked the movie a lot, so there’s no reason he shouldn’t like the series. Of course, this is the episode he watched with me, and I immediately felt the need to emphasize that it’s not like the great episodes about which I’ve been raving.

This series is no stranger to comedy and even a bit of camp, but “Big Hero 7” is disappointing even in this regard. The opening scene, in which High Voltage dance and attack Krei to steal his batteries, is ridiculous, too ridiculous to even be funny. All of the episode’s action sequences go in this direction, and the one in the coffee shop is also particularly bad. Juniper and her mother go back and forth between playing music from the 80’s and contemporary top 40, all the while dancing and tearing the place up. Is this supposed to be funny? Are we, as the audience, supposed to feel something or care about these two? I found them absolutely delightful in episode two, “Issue 188,” in which they were hilarious and their dance sequences much more effective. I don’t know where they went wrong, as I was looking forward to seeing them again. I’m not even opposed to the concept of the two having a dispute, and their familial relationship being used to make them into sympathetic villains. Maybe they could even be redeemed at some point. But it’s not done well at all. Their scenes in “Big Hero 7” fail to be funny, exciting or emotional. Having their dispute center on a dance move was a terrible idea, and it’s hard to believe Juniper seriously got so upset about it and took it as a betrayal. As such, their reunion in the end isn’t satisfying at all.

As disappointing as High Voltage’s comeback is, it’s not the only aspect of “Big Hero 7” at fault. Richardson Mole works alright as a minor character and foil to Fred, but he really does not serve well as a major character in this episode. They repeat several of the same gags from “Issue 188,” mainly those involving him having a thing for Gogo and showing Fred up. Repeat jokes can be effective, and sometimes even funnier than the first time, but that’s not the case here. He’s also really irritating and demanding, and it’s truly frustrating to see Hiro and the others forced to accept him as a teammate, even temporarily. I was disappointed to discover that the title even referred to Mole; I had assumed that Mini-Max would become a permanent team member. That would have been more interesting, and something new rather than a lesser retread of an earlier episode. In fact, “Big Hero 7” seems to take a lot of plot elements from “Issue 188,” but loses all of what made that episode memorable in the first place. 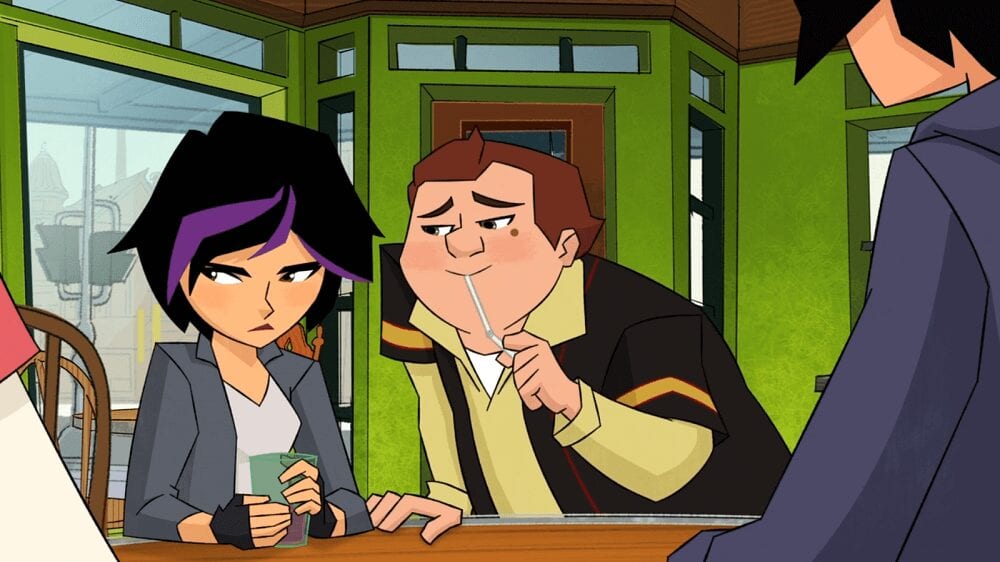 Hiro doesn’t get to do anything in “Big Hero 7” other than make Mole’s suit, and the same is true of the whole team, except for Fred, who acts like a complete moron. Gogo’s scenes mainly involve being disgusted with Mole and saying “Woman up!” to High Voltage. Although it’s a minor thing, I was also disappointed with the return of her irritating catchphrase from the first movie. I haven’t been missing it in the other episodes, and I hope it immediately returns to the grave. One also wonders why Krei is even involved in the opening fight when he never appears in “Big Hero 7” again. Seriously, he doesn’t even call to ask Hiro to get his batteries back. Does he not care that his newest invention has been stolen? Why even bring in this relatively major character for 30 seconds and then never mention him again, even when the MacGuffin batteries rightfully belong to him? It’s rather cheap to undo the entire episode in the last act, too. If there will be no consequences to Fred’s ridiculous and, frankly, out-of-character actions, why even show them in the first place?

All things considered, “Big Hero 7” is a stinker all around. A feud between the villainous duo that could either be hilarious or poignant is neither, the return of things like Gogo’s catchphrase and Mole are unnecessary, and most of the main cast is underused or ignored. Adding insult to injury, this comes right after “Mini-Max,” an episode that was superior in almost every way, introducing a fun new character, developing existing ones and bringing Callaghan back into the mix. Why have such a serious, plot-driven episode followed immediately by whatever the heck “Big Hero 7” is supposed to be? I’m baffled and a little despondent, as this is definitely my least favorite episode yet. However, I’ve been enjoying the series a lot, and I’m hoping next week will be better.

All things considered, “Big Hero 7” is a stinker all around. A feud between the villainous duo that could either be hilarious or poignant is neither, the return of things like Gogo’s catchphrase and Mole are unnecessary, and most of the main cast is underused or ignored. Adding insult to injury, this comes right after “Mini-Max,” an episode that was superior in almost every way, introducing a fun new character, developing existing ones and bringing Callaghan back into the mix. Why have such a serious, plot-driven episode followed immediately by whatever the heck “Big Hero 7” is supposed to be? I’m baffled and a little despondent, as this is definitely my least favorite episode yet.